In billboard war, Warisan pushes unity while Perikatan banks on cult of personality

An election poster of Warisan president Datuk Seri Shafie Apdal is seen in Luyang, Sabah September 14, 2020. — Picture by Firdaus Latif
Follow us on Instagram, subscribe to our Telegram channel and browser alerts for the latest news you need to know.
By EMMANUEL SANTA MARIA CHIN AND JULIA CHAN

KOTA KINABALU, Sept 17 — The campaign and poster war between the defending Warisan Plus coalition and the challenging Gabungan Rakyat Sabah have gone in two distinct directions, with the former pushing state solidarity and the latter hoping to profit from Tan Sri Muhyiddin Yassin’s positive approval.

The Warisan Plus campaign struck a chord with users of social media — the modern battleground for support in urban and semi-urban areas — with its stylised imagery that borrowed heavily from former US president Barack Obama’s 2008 “Hope” poster for his presidential campaign then.

Shafie’s campaign has altered the message for the state election, however, touting “Unity” and multiculturalism in an apparent attempt to draw focus on the heavy dominance of the Malay-based Bersatu, Umno, and PAS in the federal government.

Its posters feature a pensive-looking Shafie in shades of Sabah’s state colours and emblazoned with mottos such as “In God we trust, unite we must,” or “We are here to build a nation, not a particular race or religion,” along with the hashtag #SabahansUnite.

The imagery was created by a group of youths who called themselves the Sabah Unity Movement.

Sabahans have responded favourably to the billboards that appear to only be in urban areas, lauding the Warisan Plus campaign for pushing a message of peace and unity as well as for positioning Shafie as a leader for all Sabahans rather than any single community.

Former beauty queen Deborah Priya Henry also shared a photo with the caption “a refreshing and much needed show of leadership. Malaysia for all!”

Shafie has embarked on an aggressive social media campaign, and gained particular traction with his Malaysia Day message video in which he spoke candidly about his life and upbringing, before driving home the message that Sabah was for all races. 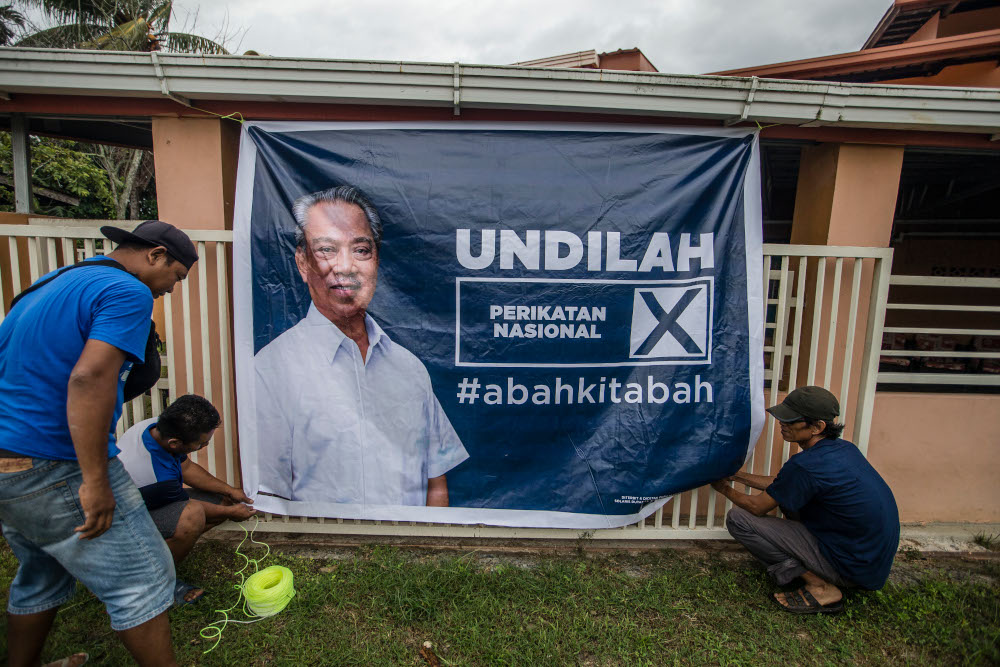 Outside of urban areas, however, the Perikatan Nasional poster campaign was more apparent.

In this, the coalition that was part of GRS sought to tap the popularity of Muhyiddin, the prime minister, and expanded on previous attempts to portray him as a father figure of sorts to the country.

Depicting a smiling Muhyiddin, these described him as Abah kita (our father) but localised to Sabah using the multifunction colloquialism bah for hashtags such as #abahkitabah #abahtetapsayangsabah (“father still loves Sabah”) and #KitaJagaKita, the community-driven initiative and hashtag which he co-opted previously for the federal government’s Covid-19 response.

In the Malay language, abah is an affectionate term for father and the campaign’s message inferred a patriarchal relationship between the prime minister and Malaysians.

The bid to bank on Muhyiddin’s personal approval — which independent pollster Merdeka Center recently put at 69 per cent positive — appeared to turn off some Sabahans on social media, however.

Among others, they saw it as an attempt to shoehorn peninsular culture into a campaign to woo Sabahans’ support.

“Geli la (It’s cringey), who came up with this? It’s appalling. We already have our own words, no need to add anymore,” said Francis Sidom.

Kota Belud native Ramli Ejun, 58, a civil servant said he found the message confusing, especially when Muhyiddin’s imagery was accompanied by the Undilah (Vote for) term.

He said it did not make sense for the PN campaign to feature Muhyiddin so prominently when the election was for a new state government and the latter was not standing as a candidate in any local constituency.

Coincidentally, PN and its allies Barisan Nasional are at odds over who should be the GRS candidate to be chief minister and have yet to present one to the public, preventing them from promoting any in such material.

“Where can a PM who is in Semenanjung or KL, stand in Sabah? During a state election no less. There is no way, and this is just a confusing technique that will cause much hate among Sabahans,” he said.

“I find it inappropriate.”

The contrasting billboards and posters of the two camps appeared to epitomise the cohesiveness of the Warisan Plus and GRS campaigns so far.

While the Warisan Plus coalition comprising Shafie’s Warisan, Pakatan Harapan parties, and Upko have managed to avoid overlaps and united behind him as their leader, GRS has been marred by infighting that caused the allied PN, Barisan Nasional, and aligned Sabah parties challenge one another in 20 of the 73 seats being contested.

The premature 16th state election was triggered after Shafie sought the dissolution of the state assembly when predecessor Tan Sri Musa Aman mounted an abortive takeover bid on the back of defections.

The Election Commission has set September 26 as the polling day.