KUALA LUMPUR, Aug 13 — Being able to balance work with life and having flexible working hours are key factors for Malaysian employees who are happy at work, while feeling that they could be paid more by their employers is a leading cause of dissatisfaction, a recent survey has shown.

In the survey by market research firm Vase, a total of 1,042 Malaysians who are currently employed were asked to rate their satisfaction level at their current workplace. 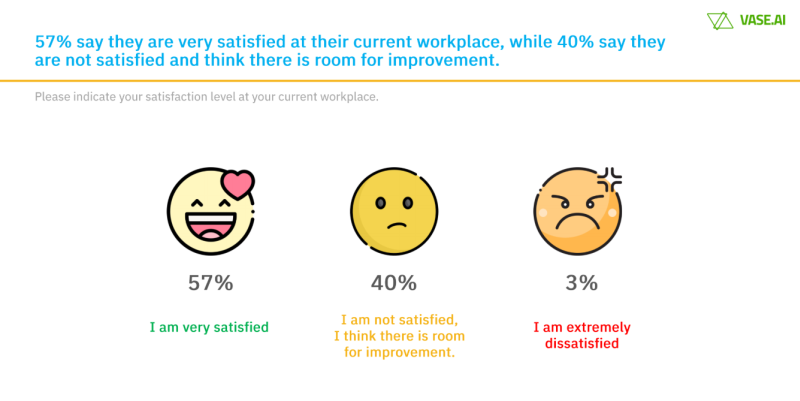 When it came to employment sectors, a higher percentage of those in government or statutory bodies were very satisfied at 67 per cent, followed by the self-employed at 64 per cent and those in the private sector at 51 per cent.

Reasons for happiness at work

The top five reasons for those who said they were “very satisfied” were flexible working hours (37 per cent), work-life balance (35 per cent), superiors who are understanding (30 per cent), being able to freely express their own thoughts and ideas (29 per cent) and a great salary (28 per cent).

Why the dissatisfaction at work

On the flipside, the desire for better pay is the overwhelming reason for why Malaysian employees are dissatisfied at their workplace with 58 per cent of dissatisfied respondents selecting this, followed by 42 per cent who feel training and development could be improved, and 40 per cent who want a better work-life balance.

The survey results appear to suggest that male and female employees may have different priorities when it comes to what they feel should be improved at their workplace.

For male respondents, 29 per cent said technical equipment could be upgraded, while only 21 per cent wanted better medical benefits. Only 18 per cent felt more empathetic superiors could boost their work environment.

In contrast, for female respondents, 44 per cent felt that clearer opportunities for career advancement would make them more satisfied, while 35 per cent wanted better medical benefits and 31 per cent believed the workplace could be improved with more empathetic superiors.

However, when it comes to the issue of improved salary levels or financial compensation for their work, a high percentage of both male and female respondents cited this, at 52 per cent and 65 per cent respectively.

For the 3 per cent of the 1,042 respondents who said they were extremely dissatisfied with their current workplace, the top reason is a toxic and unhealthy work environment (41 per cent).

This is followed by the company not being ethical in the way work is carried out (28 per cent), superiors who micro-manage (25 per cent), salaries not being banked in on time (13 per cent), and not being paid the Employees’ Provident Fund or EPF (6 per cent). Employers are legally required to make contributions to employees’ retirement savings via the EPF.

Why employees may change jobs/companies

Out of 11 possibilities, the number one reason for why Malaysians may switch jobs and move on to a different organisation is the desire for a higher salary with 52 per cent of respondents saying this.

This was followed by those wanting a new work environment (34 per cent), a more convenient work location that is closer to home or public transport (28 per cent), as well as more lucrative benefits such as healthcare and pension (28 per cent).

What Malaysians are willing to sacrifice for their dream job

The respondents were also asked the question of what compromises they would be willing to make to ensure job satisfaction, when faced with the scenario of landing their “dream job”.

The top compromise selected was working longer hours or on public holidays (36 per cent), followed by working further from preferred locations (32 per cent), limited career progression (23 per cent), unattractive working environment (14 per cent), taking a lower salary (12 per cent), and reduced benefits such as no healthcare (12 per cent).

But 20 per cent of those polled said they were not willing to make any sacrifices.

The online survey was conducted nationwide by Vase together with the Digi-X team from January 22 to January 29 among 1,042 Malaysian respondents, with all of them aged 24 and above and currently employed. The respondents were multiracial: 70 per cent were Bumiputera, 25 per cent Chinese and the rest Indian or of other ethnicities.

A total of 60 per cent of the respondents worked in the private sector, 21 per cent with the government or statutory bodies, 19 per cent were self-employed while 1 per cent fell under the category of others.

The majority of the respondents had been with their current jobs for more than one year, with the largest group having worked more than five years (38 per cent), while the rest include those who had worked four to five years (6 per cent), three to four years (8 per cent), two to three years (12 per cent), and one to two years (15 per cent).