KUALA LUMPUR, Aug 13 — Around two out of five, or 42 per cent of Malaysians polled believe that salaries are paid differently based on gender, a recent survey by market research firm Vase showed.

The same poll of 1,042 Malaysians found a close 40 per cent feeling that everything is "fair and square" when it comes to salaries for different genders in local organisations, while 18 per cent replied that they do not know if there is a gender pay gap, the report by Vase released yesterday showed.

But when it came to their own workplace, over half of those polled, 52 per cent, felt everything was fair and square. Those who said there was a gender pay gap shrunk to 30 per cent while 18 per cent said they do not know.

As for why they believed a gender pay gap exists in Malaysia, the top reason selected by 42 per cent of the respondents was the assumption that a "particular gender" is unable to carry out certain tasks. Significantly, when broken down according to their gender, women (44 per cent) pipped men (40 per cent) in picking this as their answer. 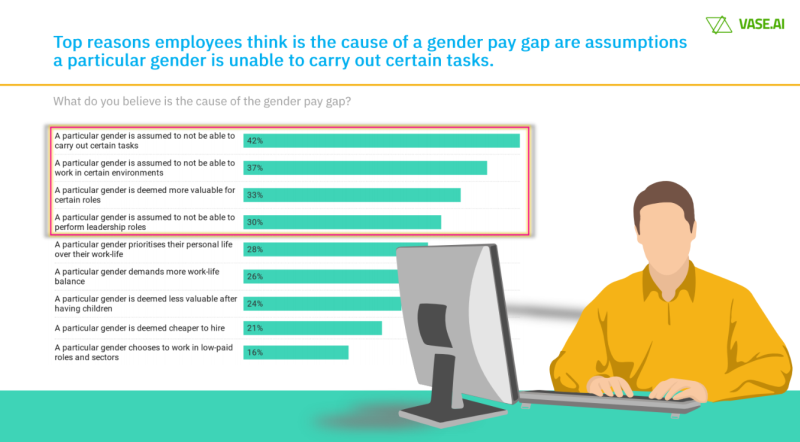 But are the views by the respondents in the survey reflective of the actual reality in Malaysia?

While the Vase survey did not specify if the “particular gender” refers to male or female employees, official statistics in Malaysia have shown that men generally earn more than women.

In the latest available data published by the Department of Statistics Malaysia in October 2019, the Salaries and Wages Survey Report Malaysia 2018 showed men earning a median monthly salary of RM2,342 as compared to women at RM2,227.

This translates to a difference or gap in median salary of RM115 each month between these two genders in 2018.

But even with an increase in median pay for both genders annually, female workers lagged behind their male counterparts every year during this nine-year period — except for in 2016 when both genders had the same median monthly salary of RM2,000.

The online survey was conducted nationwide by Vase together with the Digi-X team from January 22 to January 29.

Those polled were aged 24 and above and currently employed and comprised 70 per cent Bumiputera, 25 per cent Chinese with the remaining Indian or of other ethnicities.

According to Vase, 60 per cent of those polled were private sector workers, 21 per cent worked with the government or statutory bodies, 19 per cent were self-employed and 1 per cent fell under the category of others.

Thirty-three per cent of the 1,042 respondents were categorised as white collar workers such as clerks, nurses, teachers and salesmen; 23 per cent gave their jobs as professionals, executives or managers; 21 per cent declared themselves self-employed or freelancers; while 14 per cent are blue collar workers such as technicians, mechanics, waitresses, hawkers, followed by 7 per cent in the others category, and 2 per cent said they were business owners or traders.

In 2018, women rights advocacy group Women’s Aid Organisation (WAO) was reported to have urged Malaysian companies to adopt the UK approach to increase transparency about the gender wage gap.

WAO suggested the government ask companies in Malaysia to reveal how much they pay their male and female staff to solve the issue of women being paid less than men for doing the same work, noting the lack of such information enables the gender pay gap as women often do not know they are paid less than their male counterparts.