The DOSM noted that there were 610,500 unemployed individuals from the Malaysian workforce in that March 2020 alone. ― Picture by Shafwan Zaidon
Follow us on Instagram, subscribe to our Telegram channel and browser alerts for the latest news you need to know.
By IDA LIM

KUALA LUMPUR, May 8 — Unemployment rose to 3.9 per cent in March, the highest it has been in a decade, according to data from the Department of Statistics Malaysia (DOSM) that hinted at the still-unseen ramifications of the unprecedented nationwide lockdown.

In its release today of key statistics of the labour force in Malaysia for March 2020, the DOSM noted that there were 610,500 unemployed individuals from the Malaysian workforce in that month alone.

While the data did not contain projections, joblessness is expected to be significantly higher for April, the entirety of which was spent under the MCO, as well as May when most businesses have yet to fully resume.

“Unemployment rate (seasonally adjusted) in March 2020 also increased to 3.9 per cent as compared to 3.3 per cent in the previous month,” the DOSM said on its website.

These figures are despite the MCO being in place for only about half of the month of March, where non-essential businesses had to temporarily close down.

The effects of the MCO on the April and May unemployment rates are yet to be seen. The MCO which was initially meant to be for a two-week period from March 18 to March 31 was further extended three times until May 12, with Malaysia now under a conditional MCO (CMCO) since May 4 where most businesses have been allowed to reopen if Covid-19 prevention measures are practised.

The unemployment rate in January was at 3.2 per cent, and 3.3 per cent in February, before increasing to 3.9 per cent in March.

Attributing the high unemployment rate in March mainly to the “adverse impact” of MCO on the labour market, Chief Statistician of Malaysian Datuk Seri Mohd Uzir Mahidin also noted in a statement that Malaysia’s highest-ever unemployment rate was recorded at 7.4 per cent in 1986.

Previously on April 29, the DOSM said Malaysia’s unemployment rate was 3.3 per cent for the entirety of 2019, which was also unchanged from 2018. 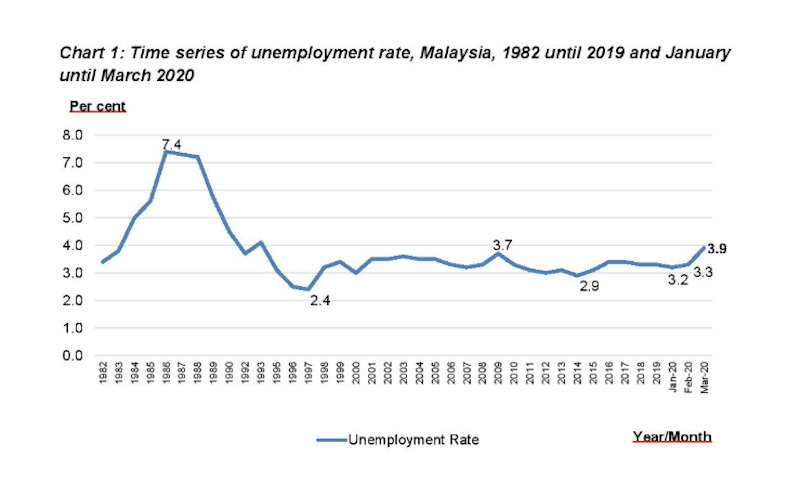 — Screengrab from Department of Statistics of Malaysia’s (DOSM) statement

Out of the 15.23 million individuals who are working or employed, Mohd Uzir highlighted that those who rely on daily income or earning by their day’s work were particularly vulnerable.

“Out of the total number of employed persons, 2.81 million were own account workers such as small traders/ entrepreneurs (pasar tani/ night market/ catering/ freelancers etc) who earn daily income/wages. They were exposed to the risk of unemployment and work loss that can affect income during the MCO, partly because they were unable to work or run their business,” he said.

According to the DOSM’s definition, employed persons are those who have worked for at least one hour for pay, profit or family gain — during the reference week used to record the figures — including as an employer, employee, own-account worker or unpaid family worker; as well as those who did not work then due to illness, injury, bad weather, leave, labour dispute and other reasons but had work to return to; as well as those temporarily laid off with pay but would definitely be called back to work.

How about Jan-March 2020 unemployment data?

“The unemployment rate was the highest ever recorded since the second quarter of 2017,” Mohd Uzir said regarding the DOSM’s principal statistics of labour force for Malaysia for first quarter (Q1) 2020.

In terms of numbers, there were an estimated 546,600 individuals unemployed during the first three months of 2020, which is up 5.8 per cent when compared to the same period in 2019.

According to the department, almost one-third or 29.3 per cent of the unemployed individuals during the first three months of 2020 are attributed to graduate unemployment.

When examined according to age group, youths aged 15 to 30 recorded the highest unemployment rate (6.9 per cent) — which is much higher than the national unemployment rate of 3.5 per cent—in the first three months of 2020, while the unemployment rate during the same period for those in the 31 to 45 age group is at 1.4 per cent and for the 46 to 64 age group at 1.1 per cent, the DOSM said.

The DOSM’s statistics on unemployment data and working hours figures appear to be in line with indicators of sentiments on the ground, as reflected by its findings today of a recent survey on 4,094 local businesses and companies.

From the 4,094 companies who took part in the DOSM’s survey on April 10 to May 1 or during the MCO’s second to fourth round, it was found among others that 19 per cent reduced their employees’ working hours while either enforcing pay cuts or still giving full pay[d], while 3.8 per cent terminated the employment of employees.