An Alam Flora personnel sprays disinfectant at Pasar Pudu to prevent the spread of the coronavirus in Kuala Lumpur April 1, 2020. — Picture by Firdaus Latif
Follow us on Instagram, subscribe to our Telegram channel and browser alerts for the latest news you need to know.
By IDA LIM

KUALA LUMPUR, April 6 — The Cheras district in Kuala Lumpur is now a red zone or a Covid-19 hotspot, where more than 41 cases have been recorded, the latest data released today by the Health Ministry showed.

Cheras was an orange zone or one category below with 38 Covid-19 cases on April 4, but the latest figures show that it has now crossed over to be a red zone with a total cumulative tally of 44 cases as of April 5.

With Cheras now categorised as a red zone, all four districts in Kuala Lumpur are now marked as red zones.

With the addition of Cheras, the total number of Covid-19 red zones in Malaysia has also gone up to 18.

Top red zone is in KL

As of April 5 noon, the Lembah Pantai district is the nation's top red zone for the third day running as it has the highest cumulative tally of Covid-19 cases at 376.

In other words, about 67 per cent of the 3,662 Covid-19 cases detected in Malaysia as of April 5 have been recorded in just these 18 red zones.

There are now a total of 22 orange zones nationwide as of April 5, down from 23 orange zones the day before as Cheras is now a red zone.

According to the definition in the Health Ministry's maps, an orange zone is a district where 20 to 40 Covid-19 cases have been recorded so far. 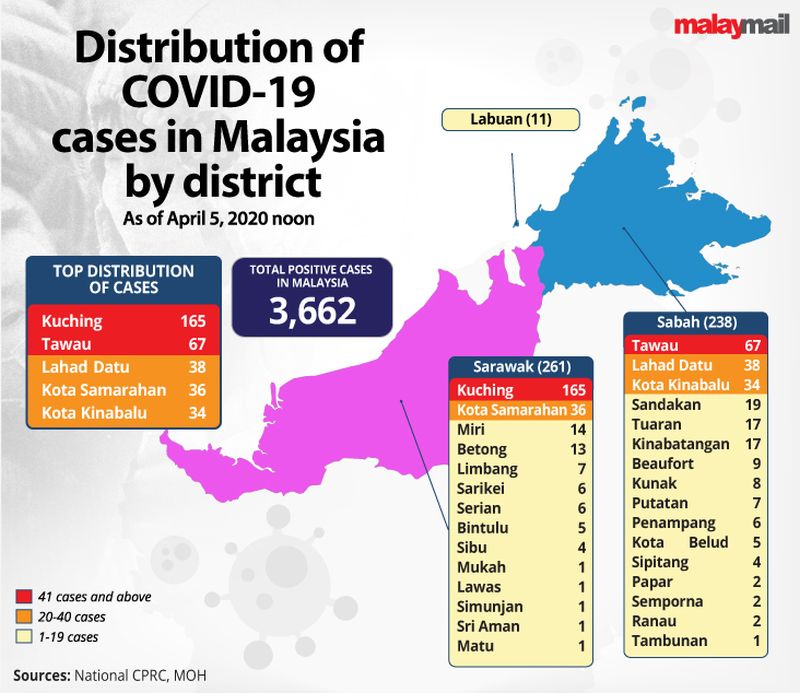 Why being an orange or red zone matters

The significance of being an orange zone is that it sometimes only takes several cases for a district to tip over and be recategorised as a red zone, with red zones being districts that have 41 cases and above.

Although being designated as a red zone does not necessarily mean that the entire district would have more restrictions of movement by the government to curb the spread of Covid-19, selected villages or even buildings — with a very high concentration of Covid-19 cases detected — in red zones can be put under tighter control to enable the government to carry out door-to-door Covid-19 detection activities. 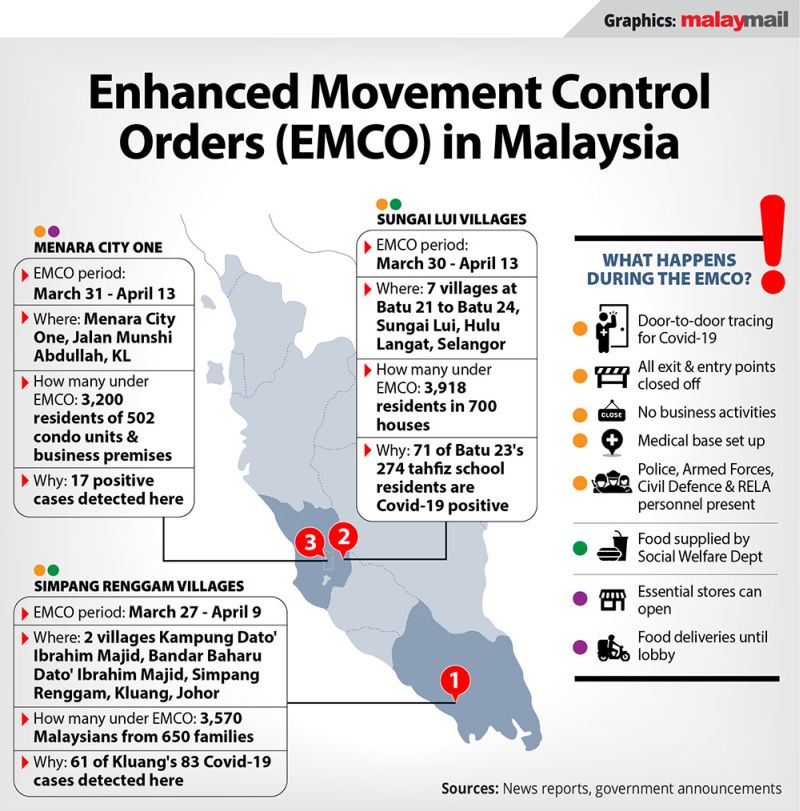 In the Health Ministry's maps, a green zone is a district where no Covid-19 cases have been recorded.

There are now only 30 districts in Malaysia that have not recorded any Covid-19 cases as of April 5, down from the tally of 31 districts that remained unchanged from April 1 to April 4.

This is due to Sarawak's Matu district — which was initially a green zone — being recorded as having one Covid-19 case as of April 5.

Originally, however, in the first batch of data released by the Health Ministry, Malaysia had a total of 39 districts in seven states on March 25 that had zero Covid-19 cases. 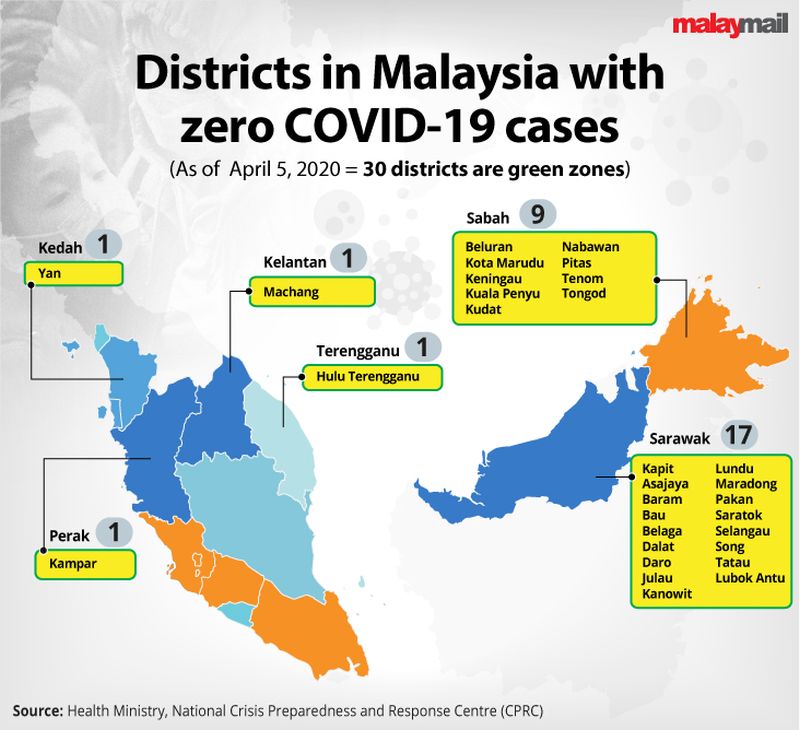 As of April 5, the total of confirmed Covid-19 cases recorded in Malaysia so far stands at 3,662 cases, including 1,005 patients that have recovered and 61 deaths. 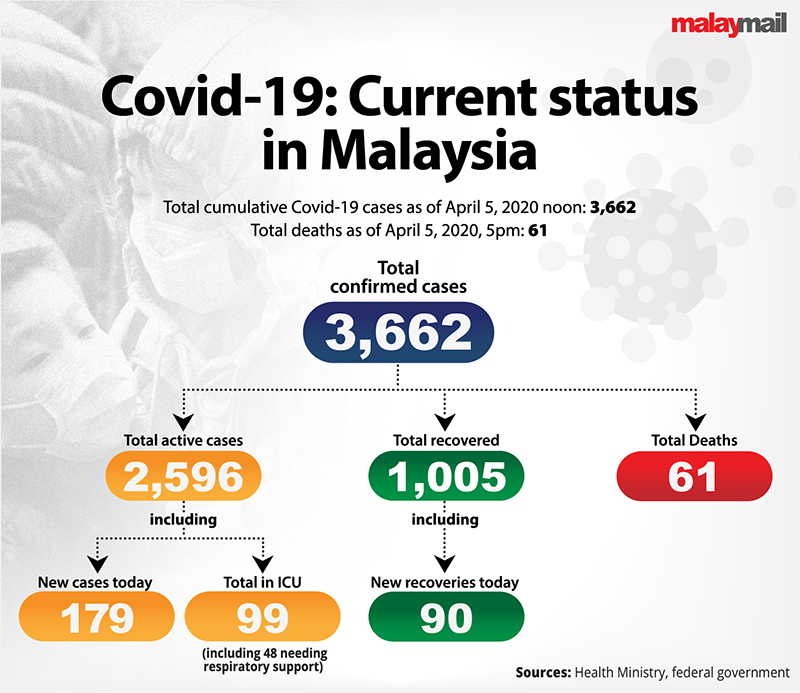