On mattresses one-metre apart, KL’s homeless placed in shelters to tide over Covid-19

Homeless people get settled in a temporary shelter after they were shifted by DBKL officials during the MCO at the ‘Pusat Komuniti Sentul Perdana’ in Kuala Lumpur April 1, 2020. ― Picture by Yusof Mat Isa
Follow us on Instagram, subscribe to our Telegram channel and browser alerts for the latest news you need to know.
By RADZI RAZAK AND KENNETH TEE

KUALA LUMPUR, April 4 ― In a multi-purpose hall in Sentul Perdana, rows after rows of mattresses laid on the parquet flooring normally reserved for badminton or wedding ceremonies ― around one-metre apart from each other.

On each of the matresses, men could be seen lounging around, most catching a few winks or just chatting with their next-mattress neighbours. All of them wore medical masks, but some were without shirts, bearing the heat of the day.

The one-metre distance is the stipulated social distancing measure to ensure they do not catch any Covid-19 infection, but a few still sat at the sidelines close to each other as they seek comfort in the chats.

There were women too, placed in similar conditions on the floor above, but there were fewer of them.

They were the homeless, among the over 500 people who were rounded up by the Kuala Lumpur City Hall (DBKL) and given a two-week stay at four different shelters across the capital, as the country weather the two-week extended movement control order (MCO) until April 14. 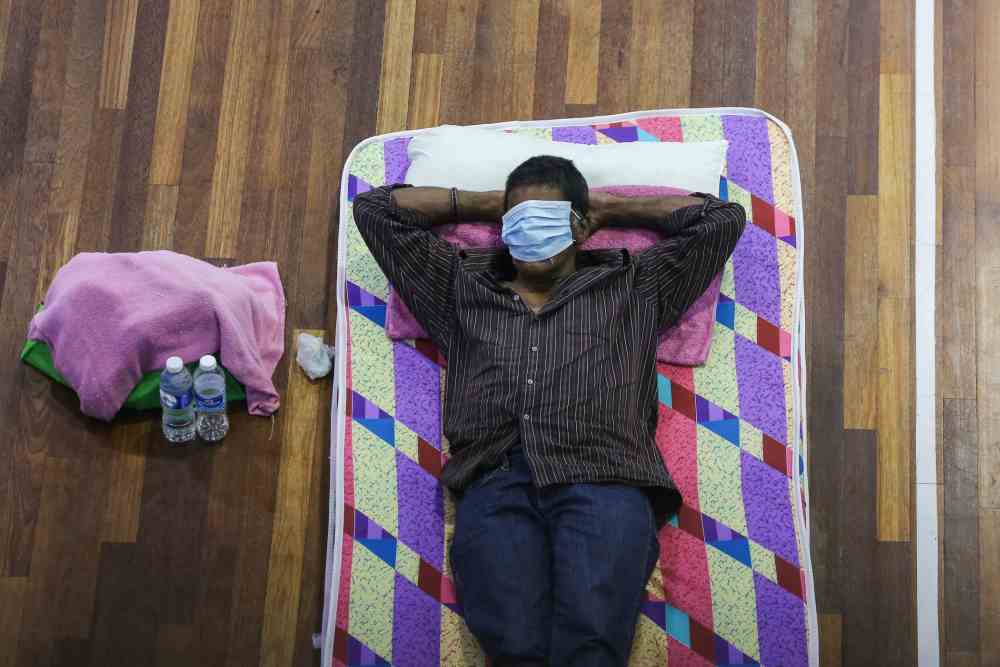 A man catches a wink at the temporary shelter in Kuala Lumpur April 1, 2020. ― Picture by Yusof Mat Isa

Amran Abdullah, one of the men who has since been appointed the “penghulu”, or the head of this motley bunch, said they had come from many spots ― from Pasar Seni and Bukit Bintang, to Chow Kit and Brickfields since Monday ― before being separated according to level of health and nationalities.

To him, this was a fine enough arrangement.

“It’s better than sleeping on the streets. What more can they ask for? We got food, shelter and can still talk to our friends here,” he told Malay Mail when met at the centre.

He however admitted that if there were something they could ask for, it would be clothing. Most of them literally only had the shirt on their backs.

“If anyone could get more pants and shirts, that would be better. We can wear something while washing the only clothes we have,” he said. 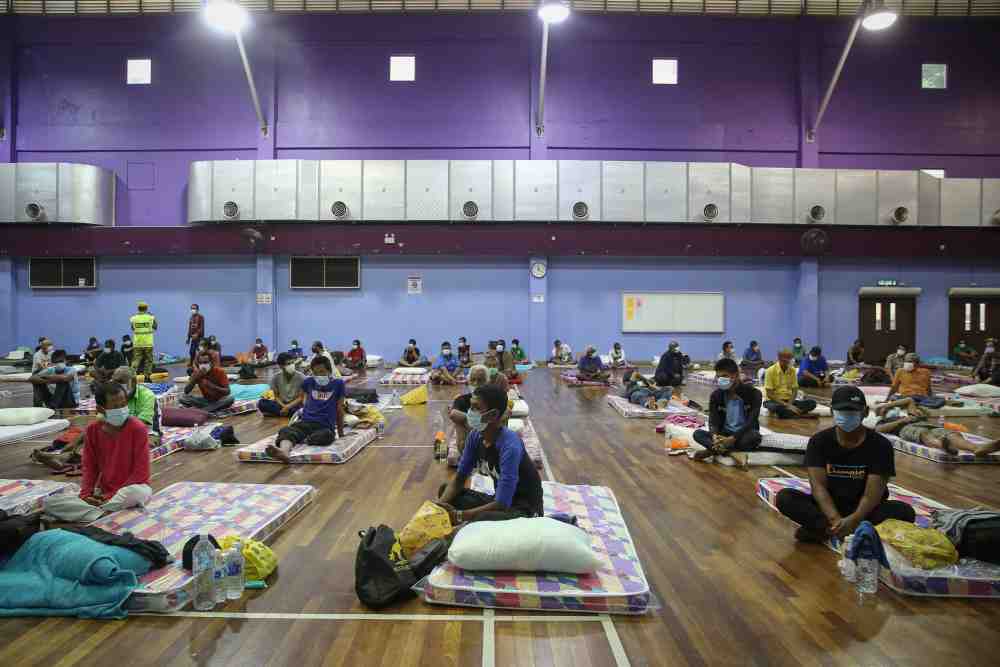 On each of the matresses, men could be seen lounging around, most catching a few winks or just chatting with their next-mattress neighbours. ― Picture by Yusof Mat Isa

“As you can see, we provided them each with a mattress, a pillow and food at least four times a day. NGOs also help provide food and other stuff,” she said.

When Malay Mail visited on Thursday, the lunch was provided by the Good Samaritan Church in Pudu, Rela and DBKL officers enforced the one-metre social distancing while the inhabitants queued up quietly to take their packed “nasi bungkus” and bottled water. 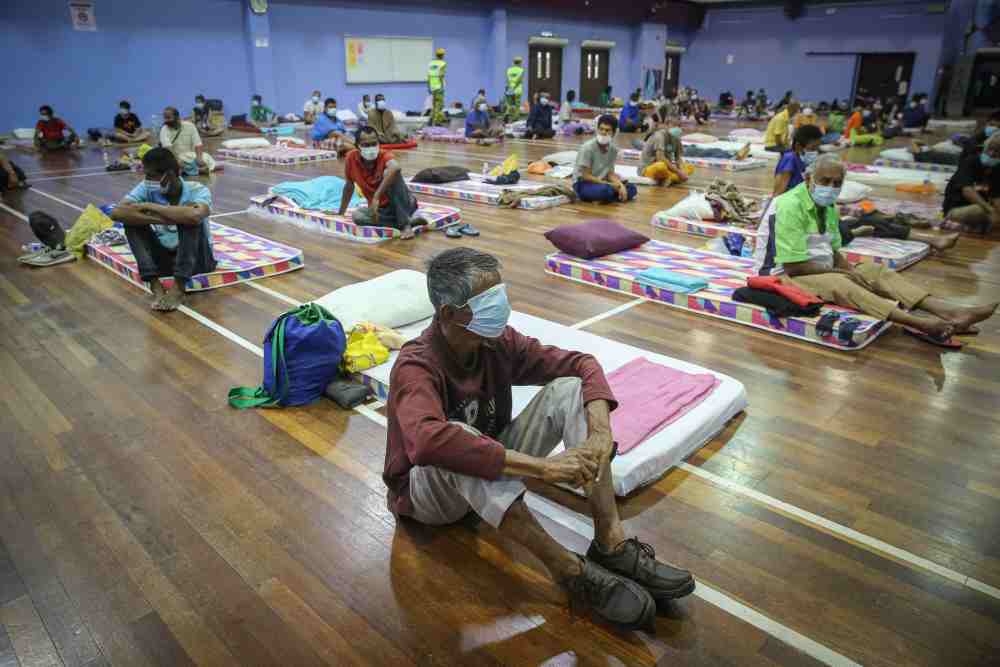 Over 500 people were rounded up by the Kuala Lumpur City Hall (DBKL) and given a two-week stay at four different shelters across the capital, as the country weather the two-week extended MCO until April 14. ― Picture by Yusof Mat Isa

“We helped them when they were outside. When they are inside, we continue to provide as usual,” said Sister Fatima of the church, a familiar face to them as some exchanged pleasantries while taking their lunch packs.

But several inhabitants also told Malay Mail that they were erroneously brought there, claiming they are not homeless.

Sri Vinod Lal, a transgender, told Malay Mail that she and several others actually have rented rooms in the Kuala Lumpur area and were clueless why they were brought there. 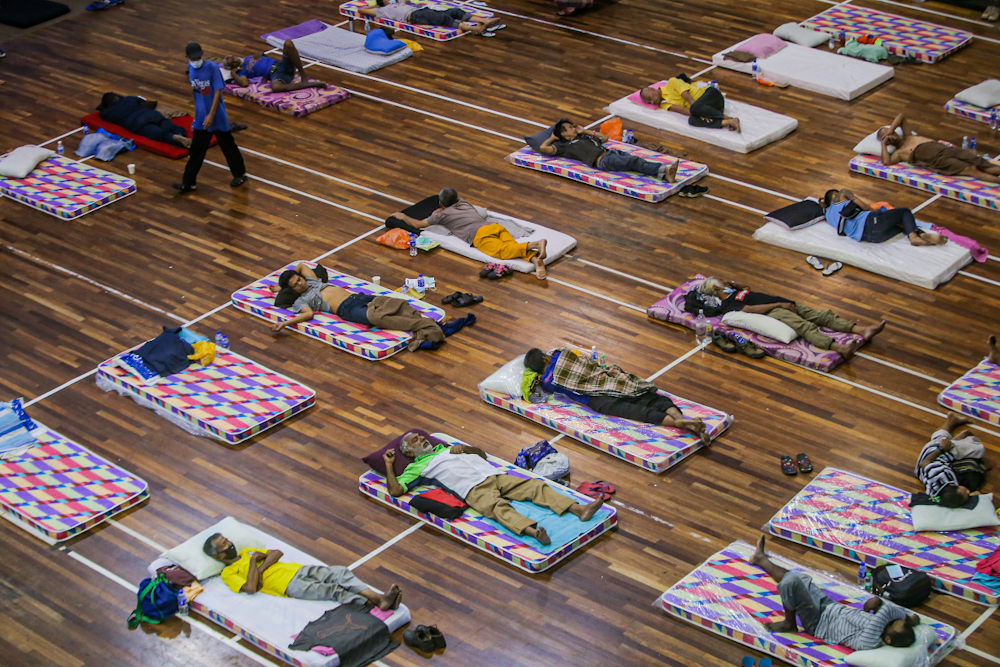 A general view of the temporary shelter at the ‘Pusat Komuniti Sentul Perdana’ in Kuala Lumpur April 2, 2020. ― Picture by Hari Anggara

“I lived with my friend in a rented room near Chow Kit Market. On Monday, when me and several others here were taking food at Medan Tuanku, several City Hall officers call us up to go inside their truck and brought us here.

“I am not homeless, so are several others,” she said, gesturing to several women detainees nearby.

An elderly woman, Arokia Mary, backed Sri’s story. She said they were taken even after they protested.

“About 20 of us here have rooms in Kuala Lumpur,” she claimed.

However, none of them could prove their claim as they do not have any identification documents.

The media were not allowed to enter the centres in Setiawangsa or Alam Damai, but a health official told Malay Mail about 100 of the homeless were taken to Setiawangsa and were being monitored by Kuala Lumpur Hospital and Health Department staff. 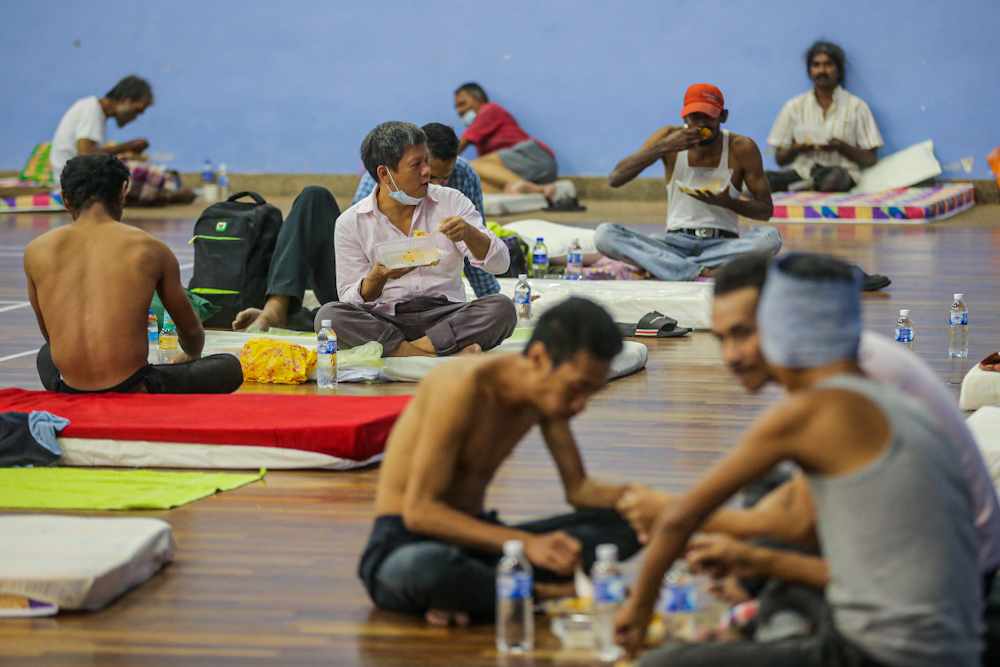 A few men are seen having a meal together at the ‘Pusat Komuniti Sentul Perdana’ in Kuala Lumpur April 2, 2020. ― Picture by Hari Anggara

“Most of the people here are the elderly and the sick. Some of them have hypertension, diabetes and other injuries and health issues.

“For those with more chronic illness or Covid-19 symtomps, they will be brought straight to the Kuala Lumpur Hospital,” said the official, who declined to be named.

Meanwhile in Ampang Hilir, a total of 78 people comprising of 69 males and 10 females, were housed there.

“We have also provided them with soaps to clean themselves and detergent to wash their clothes.

“If any of them reports uneasiness, we will contact Kuala Lumpur Hospital immediately for medical assistance,” said a DBKL official who requested anonymity. 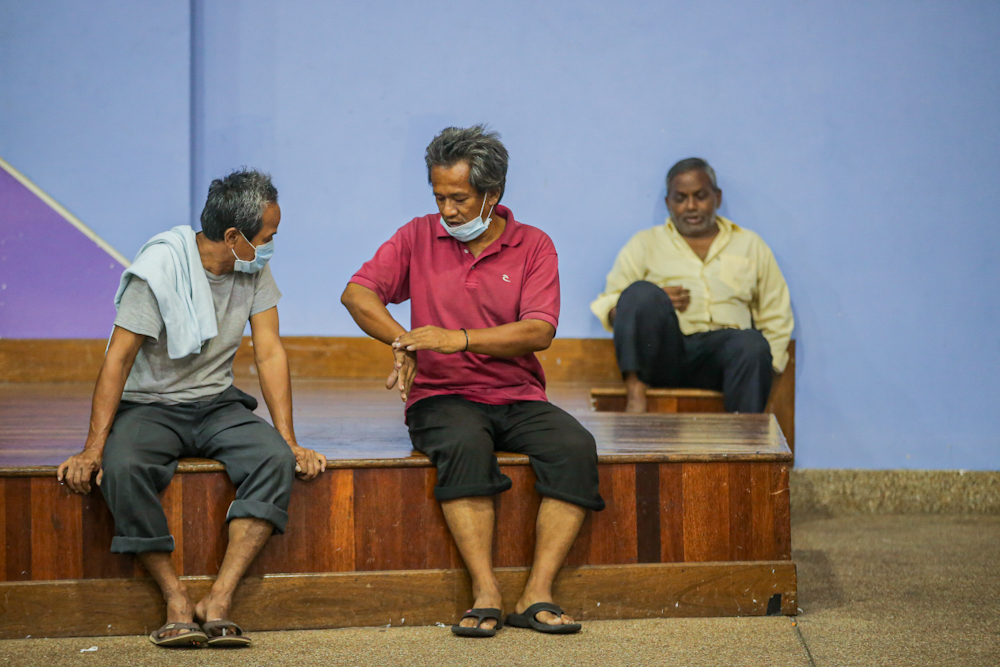 A few men are seen lounging around at the ‘Pusat Komuniti Sentul Perdana’ in Kuala Lumpur April 2, 2020. ― Picture by Hari Anggara

During Malay Mail's visit, donated clothes ― courtesy of Da’i Organisation Kuala Lumpur ― were distributed to the homeless in an orderly manner.

The official also said they were planning to invite religious-oriented organisations to provide spiritual guidance to those housed at the community halls, and also grooming service for the disheveled.

On Thursday, DBKL said some 510 homeless people were housed in two transit and four community centres around the capital under a DBKL mission to track them down and keep them safe while the MCO is in place. As at yesterday, the number is now 541 people.

KL Mayor Datuk Nor Hisham Ahmad Dahlan saidthe were put through a Covid-19 test and so far no one has tested positive, before placed based on three categories: the healthy, those with a communicable disease, mental illness and drug abuse issues, as well as non-citizens. 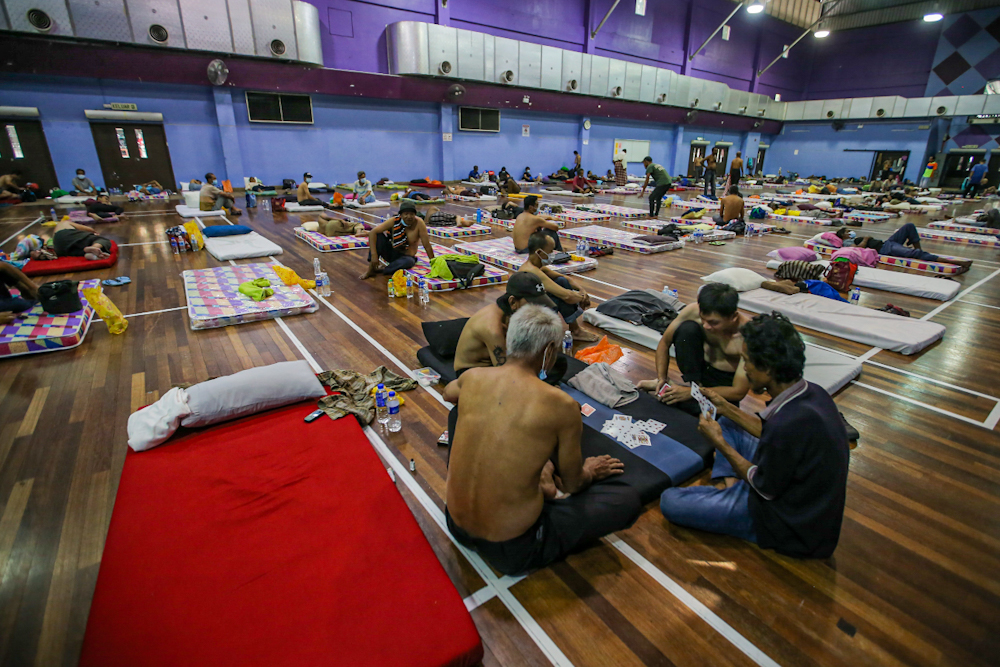 A group of men are seen playing a game of cards at the ‘Pusat Komuniti Sentul Perdana’ in Kuala Lumpur April 2, 2020. ― Picture by Hari Anggara