KUALA LUMPUR, March 31 — Kuantan in Pahang and the Johor districts of Muar and Kulai are the latest additions to Malaysia's list of Covid-19 orange zones or hotspots that are just one category below red zones, the latest data released by the Health Ministry today shows.

This means that there are now 15 orange zones throughout Malaysia or Covid-19 hotspots that have recorded at least 20 cases, based on the latest available data as of March 30 noon.

Muar and Kulai had a total tally of 18 and 19 cases on March 29, but crossed over to become orange zones when both their numbers increased to 21 the next day.

The significance of being an orange zone is that it only takes several cases in some instances for a district or area to tip over and be recategorised as a red zone. 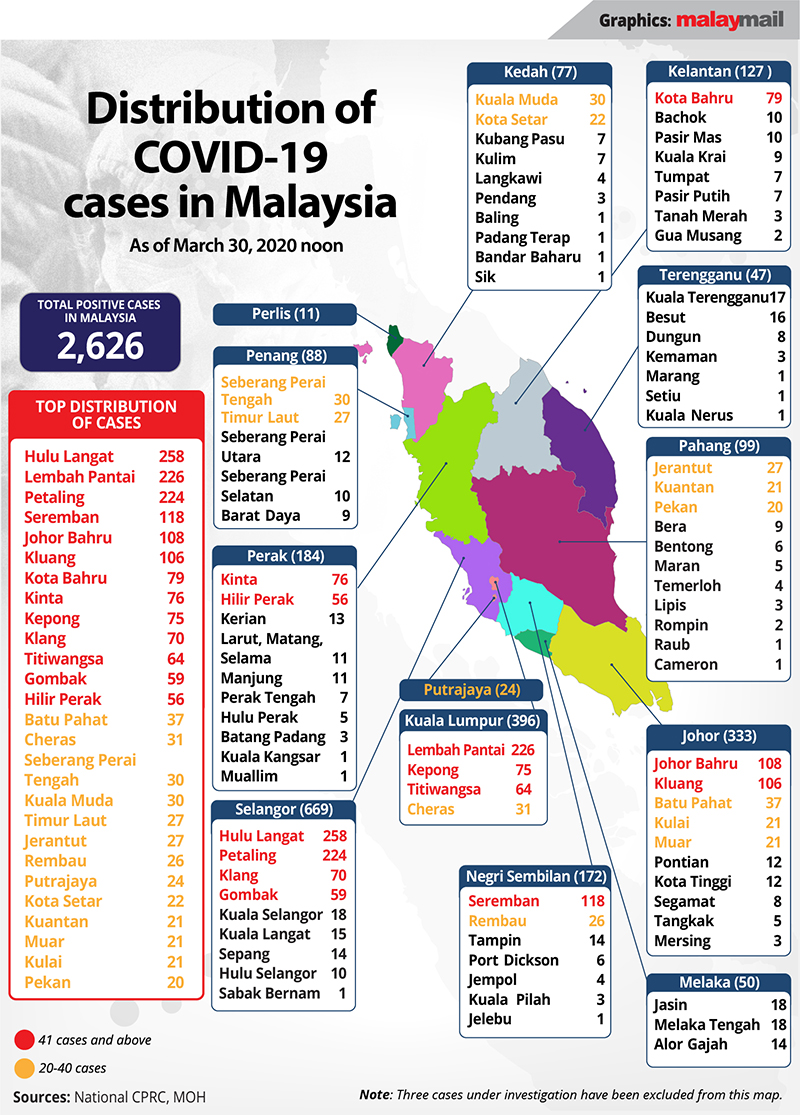 Malaysia is still at 15 red zones, the last figure recorded on March 26, with Selangor and Kuala Lumpur still among the worst-affected areas with Johor also having fairly high numbers.

Significantly, the Hulu Langat district in Selangor has emerged as the red zone in Malaysia with the highest number of recorded Covid-19 cases at 258 cases, surpassing even the Petaling and Lembah Pantai districts.

This appears to be the first time that the Hulu Langat has emerged as the top red zone since the Health Ministry started releasing figures by district over the last few days.

In other words, 63 per cent of all the 2,626 Covid cases detected in Malaysia as of March 30 have been recorded in just these 15 red zones.

Although being designated as a red zone does not necessarily mean more restrictions of movement by the government to curb the spread of Covid-19, villages or even buildings — with a very high concentration of Covid-19 cases — in red zones can be put under tighter control to enable the government to carry out door-to-door Covid-19 detection activities.

In the whole of Malaysia now, there are only 33 districts in six states that are free of Covid-19 cases as of March 30, down from the initial 39 districts in seven states on March 25.

As of March 30 noon, the number of districts with zero Covid-19 cases in Sabah has reduced to just nine districts, as Tambunan and Penampang are no longer free of Covid-19 cases but have been recorded as having a tally of one case each.

The Keningau district, which was recorded in the March 28 figures as losing its zero-case status and having one Covid-case, has now been reinstated as a green zone with zero cases as of March 30.

Looking at Sabah's overall figures of 197 cases on March 29 and 201 cases on March 30, only Tawau added on three more cases to have 60 cases and Putatan increased its tally by one case, while Kota Kinabalu's tally was reduced by one case.

This might mean that two cases originally recorded in the Health Ministry's maps on March 29 in Kota Kinabalu and and on March 28 in Keningau have been reattributed as of March 30 to Penampang and Tambunan.

The Covid-19 death toll in Malaysia now stands at 37.