A man is seen wearing a face mask during the movement control order in Kuala Lumpur March 24,2020. — Picture by Miera Zulyana
Follow us on Instagram, subscribe to our Telegram channel and browser alerts for the latest news you need to know.
By EMMANUEL SANTA MARIA CHIN

KUALA LUMPUR, March 24 — Malaysia might see an even bigger number of Covid-19 infections recorded locally, as analysts at JPMorgan Chase & Co have predicted that a peak in cases might occur around mid-April.

A report released by JPMorgan’s Asia-Pacific Equity Research group yesterday, however, projected that despite the looming acceleration phase of infections, the peak period would only last for approximately one-and-a-half to two weeks.

The report cited several reasons for the predictions, also pointing out how numbers could have been worse if not for the proactive preventive measures being taken by the government.

“We therefore forecast that Malaysia’s acceleration phase of the curve will last only for the next 1.5 — two weeks before moving into the accumulation stage, when the overall infection growth rate slows to 100 to 250 (per day).

“We forecast the peak infection by the middle of April, at approximately 6,300 (infections),” read the report.

Its authors commended the government’s decision to implement the movement control order (MCO) following a sharp increase in infections.

It also noted that the spike in the number positive of cases reported over the last three days suggested the country was entering into the graphical reference of the “curve acceleration stage”.

Another positive from the report was how Malaysia’s “aggressive” testing per capita methods are bearing fruit, with JPMorgan noting such stringent testing methods would result in higher infection numbers but would allow milder developments and lower mortality rates.

“The recent limitations on movement should also help to slow the spread and along with border controls should subdue secondary spread of the epidemic,” read the report.

The report explained that projections on the potential severity of Covid-19 in Malaysia were determined by analysing data on how China and South Korea handled the outbreak.

Among the factors taken into consideration was Malaysia’s relatively lower population density as compared to China and South Korea and the government’s relatively early implementation of the MCO to restrict local and foreign travel.

As a result of these preventive measures paired with Malaysia’s holistic testing methods, the JPMorgan report noted its optimism that the public healthcare system would be able to cope with the potential increase in cases.

“The country’s test per million is 482, which is four to 81 times higher compared to other Asean countries (six to 109 million population) and even higher than some European Union countries.

“It suggests that the country has relatively better positioning to contain the virus diffusion process,” it said.

The report added that Malaysia’s current critical care bed numbers, estimated to be around 1,060 as per data from the Malaysian Registry of Intensive Care, also suggested the healthcare system is equipped to handle severe cases.

“Given about 10 per cent of total infections generally need intensive care beds, compared to the forecasted total infection at peak (around 6,300), we initially think that the country has the capacity to absorb future hospital demand to a large degree,” it read.

One more death was recorded over the last 24 hours, bringing the local tally to 15 dead from the virus. 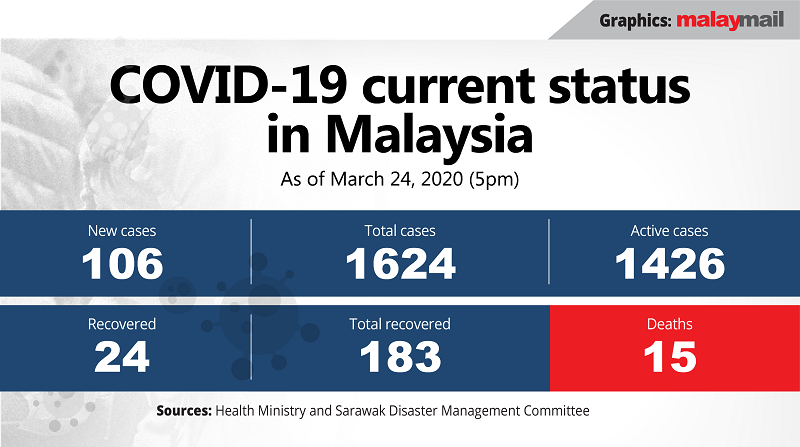