Calm after the storm: Malaysians finally see sense on Day One of shutdown after ‘Olympic record’ panic buying

People shopping at the SS15 wet market in Subang Jaya March 18, 2020. — Picture by Yusof Mat Isa
Follow us on Instagram, subscribe to our Telegram channel and browser alerts for the latest news you need to know.
By YISWAREE PALANSAMY

SUBANG JAYA, March 18 — The panic buying frenzy has abated in some parts here and in Shah Alam, which were flooded with anxious buyers making end-of-the-world purchases, which included dozens of toilet rolls and tissue paper.

A Malay Mail survey at a wet market here and a hypermarket in Giant Shah Alam saw that order has seemingly been restored after some sense still prevailed among the public.

“Supply is still good. We don’t have any issues. I am selling what I usually sell and I have all the usual varieties I sell,” Shazwan Aiman, a seafood vendor, said when met at the SS15 wet market here. Shazwan said that he shuttered his stall yesterday, as he too was rushing to buy groceries and essentials for his family, after the movement control order announcement by Prime Minister Tan Sri Muhyiddin Yassin on Monday.

He said that the situation in the market yesterday was quite alarming and that he was glad that things had returned to normal today. Fishmonger Azman Mohammad poses for a picture next to his stall at the SS15 wet market in Subang Jaya March 18, 2020. — Picture by Yusof Mat Isa

Azman Mohammad, who also runs the seafood stall with Shazwan, said that traders enjoyed brisk sales yesterday, with many items being sold out.

“Now they seem to have realised that we are going to be open daily,” he said, adding that fruits and vegetables were the most popular items purchased.

Vegetable seller Francis Xavier said that all of his vegetables were sold out yesterday.

“Yesterday was very good business. I sold all my vegetables. People were buying in bulk. They asked me if we would be open and I told them we will be open daily,” he said when met by Malay Mail. 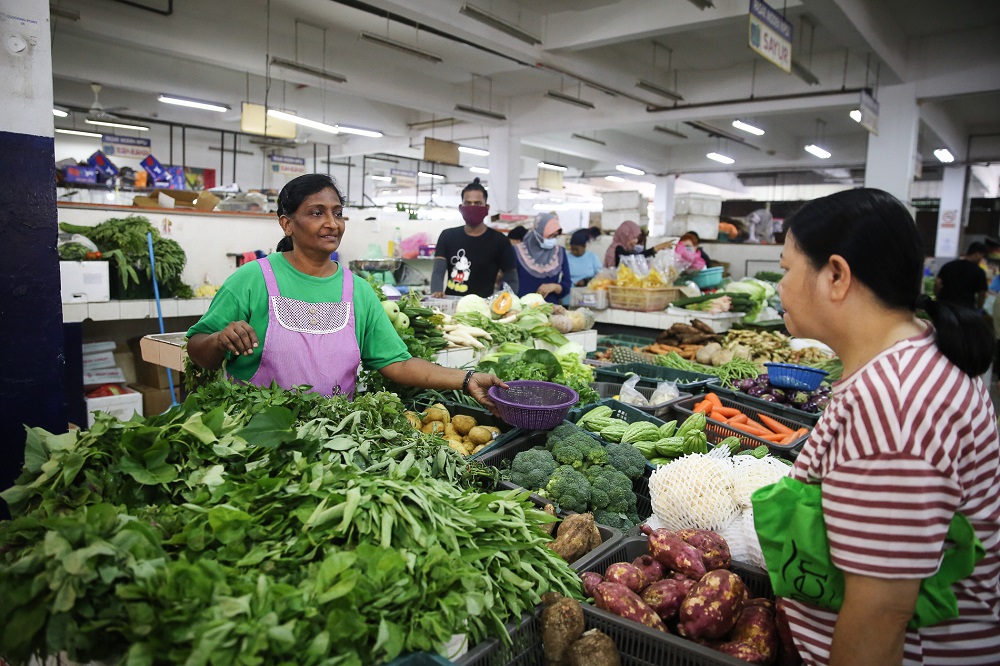 His wife, M. Ratha, said that tomatoes, long beans, ladies fingers and other bean varieties were a hit among buyers.

However, the couple admitted that prices had increased by about 30 per cent for the abovementioned vegetables.

“The imported ones, price didn’t go up though,” she said, pointing to her broccoli supply as an example. Fruit seller Ting Kin Chai was a very happy trader who said that yesterday’s panic buying earned him his biggest takings in 10 years, since he began business.

He termed his profit as an “Olympic record”.

“So many people came yesterday, it was better than the Chinese New Year season. All my fruits were sold out. It’s an Olympic record! Best business in 10 years!” he said when met.

He said today’s crowd, however, were the usual Sunday market-goers and sales were still okay.

“My fruits have no price increase. All is still good,” he added.

In Giant Shah Alam, shelves were stocked to the brim with all items being available, including meat varieties.

At 7.30am, there were, however, few cars parked outside the hypermarket’s main entrance.

The number of cars this morning, however, was a far cry from yesterday’s amount.

At about 10.30am, there were still far fewer people, who were taking their time buying daily necessities, sans pandemonium. 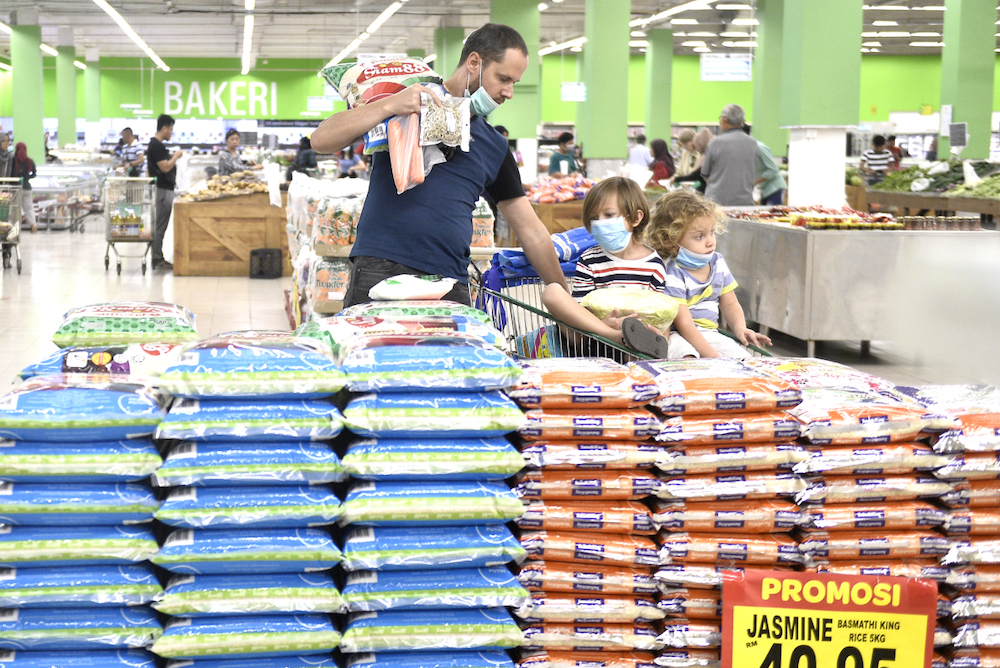 Shoppers shopping for groceries at a Giant hypermarket in Shah Alam March 17, 2020. — Picture by Miera Zulyana

The hypermarket was also relatively quiet, owing to the movement control order issued by the government.

Prime Minister Tan Sri Muhyiddin Yassin said on Monday that Malaysia will effectively be hitting pause on all non-essential activities for two weeks from today until March 31 to stop the spread of the Covid-19 virus under a nationwide movement control order.

This order covers the whole of Malaysia, with a ban on public gatherings including for any religious, sports, social and cultural events except for supermarkets, sundry goods stores, markets and other places selling daily necessities or things that people would need for their day-to-day lives. 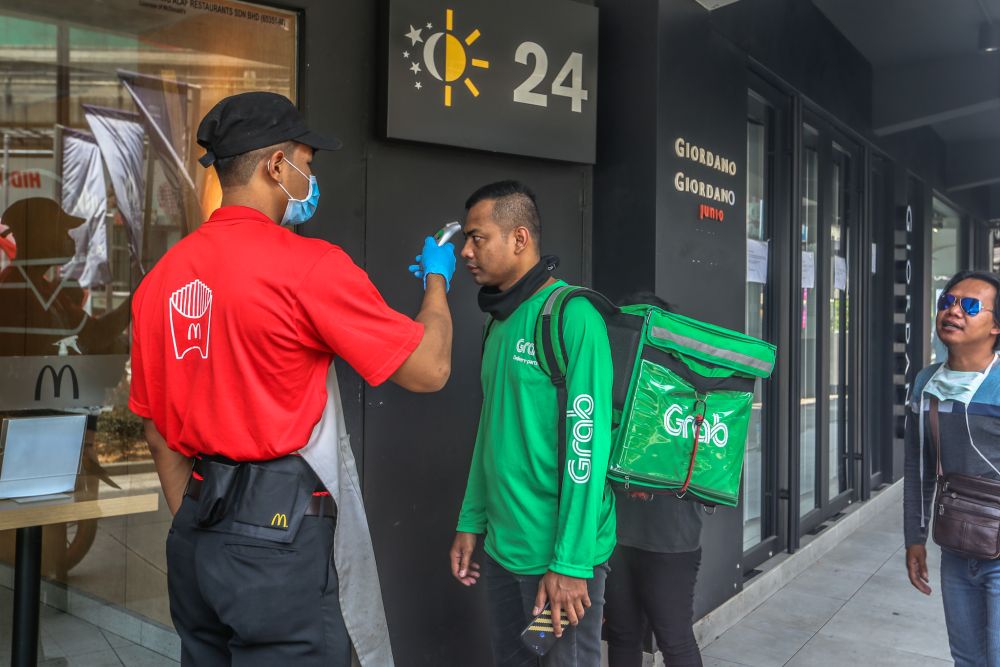 A GrabFood rider is screened by a McDonald’s staff in Bukit Bintang as the movement control order kicks in on March 18, 2020. — Picture by Firdaus Latif

However, to further clarify the movement control order, the National Security Council, through its Frequently Asked Questions (FAQ) released yesterday stated that restaurants and eateries can only cater for food delivery services such as GrabFood, Foodpanda and others but will have to strictly avoid dine-in customers.