Protesters hold up posters during a rally at Dataran Merdeka in Kuala Lumpur February 25, 2020. — Pictures by Hari Anggara
Follow us on Instagram, subscribe to our Telegram channel and browser alerts for the latest news you need to know.
By JERRY CHOONG

KUALA LUMPUR, Feb 25 — A group of student activists and representatives from several non-government organisations gathered at the historic Dataran Merdeka this evening demanding the country’s political leaders explain their decisions that have left Malaysia with a barebones government.

Their anger and frustration at the current political crisis was visible from the placards they carried, bearing messages such as “Backdoor government is unacceptable” and ‘Democracy for Malaysia” to more tongue-in-cheek ones, including “Backdoor government is sodomising the rakyat”, “Bored with old folks”, and “Ingat ini Parlimen bapak engkau?” (Think this is your father’s Parliament?)

“We did not vote for this, what did we vote for? A change, so please do what is right,” one student activist Azura Nasron, 24, said in her address. 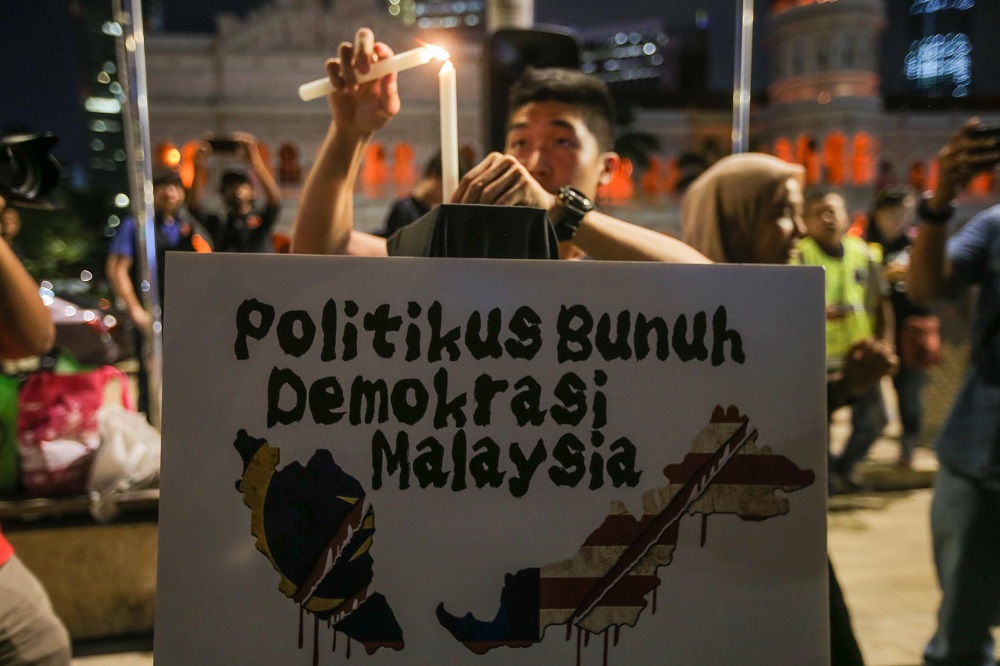 A protester lights a candle during a rally at Dataran Merdeka in Kuala Lumpur February 25, 2020. — Picture by Hari Anggara

Azura said tonight’s gathering was to signal to the politicians that voters are fed-up with their power play and will not be silenced when promises made are not kept.

“We do not want corrupted people to be in office again. Our voice was betrayed after two years in office.

“Issues such as underage marriage still considered permissible, and sexual harassment at work; these have not been addressed properly. If we do not fight for the rakyat, who will?” she asked.

Another activist, Yu Ren Chung, 33, expressed the frustration of civil society groups in seeing their hard work under the Pakatan Harapan government at risk of being discontinued.

“I have worked with NGOs to fight for the freedom of children from violence, and as it stands our voices have grown stronger.

“If the government is formed through the backdoor, it clearly does not align with the people’s aspirations, and should not be accepted whatsoever,” he said.

Universiti Malaya graduate Wong Yan Ke who had grabbed national headlines last October when he was arrested at his convocation for protesting against the vice-chancellor for alleged racism was also present.

He was among those who demanded fresh elections.

“Whatever it is, we resolutely oppose the idea of a backdoor government being formed. If they cannot be honest with everyone, then we would be better off casting our ballots again,” he said. 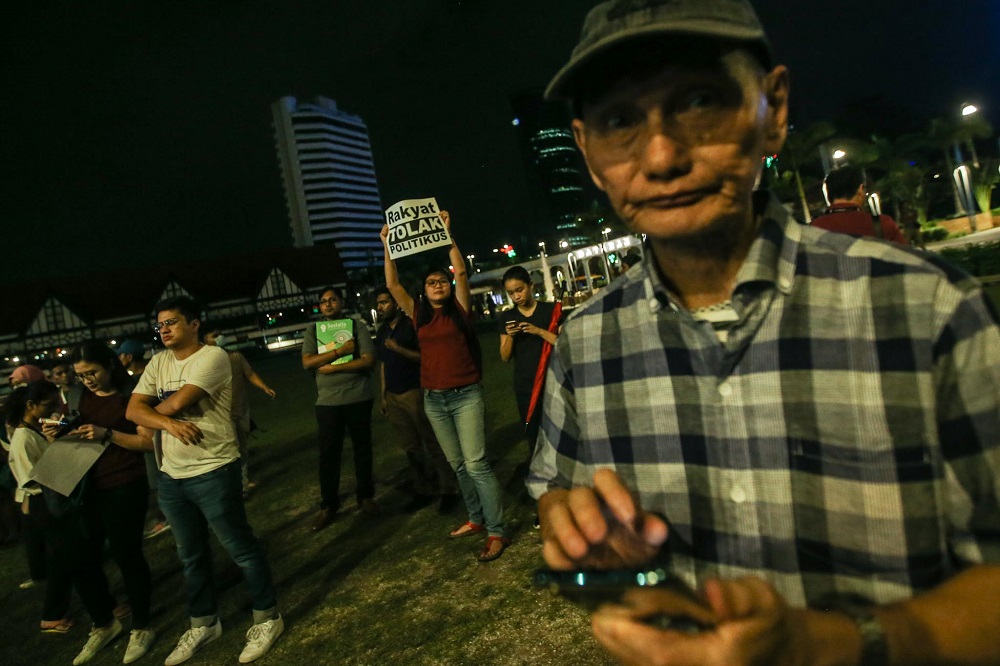 A group of student activists and representatives from several non-government organisations gathered at the historic Dataran Merdeka today to demanding the country’s political leaders explain their decisions that have left Malaysia with a barebones government.

The group, which had gathered from about 8pm, dispersed about 10pm after singing several songs to rouse their own spirits.

Malaysia has been in a state of political tumult following a Pakatan Harapan’s presidential council meeting last Friday that was supposed to outline a succession plan for the government from Tun Dr Mahathir Mohamad to Datuk Seri Anwar Ibrahim.

Since then, 11 MPs led by Datuk Seri Azmin Ali left PKR to go independent and the party co-founded by Dr Mahathir, Bersatu, withdrew from PH.

Dr Mahathir too submitted his resignation as prime minister but was reappointed interim PM by the Yang di-Pertuan Agong yesterday.

Speculations of a unity government as well as of new political alliances being formed have also spread.

The Agong has taken the unprecedented step to personally interview each of the 222 MPs to find out who commands the majority in Parliament; 90 met with the King today, with the rest to get an audience tomorrow.