Forgotten, Orang Asli in a Pahang town live off a landfill of toxic garbage

Pak Long lives about 10 minutes away in another Orang Asli village called Kampung Teraling which has minimal electricity provided by a solar panel donated by an NGO. ― Picture by SC Shekar
Follow us on Instagram, subscribe to our Telegram channel and browser alerts for the latest news you need to know.
By RUTH WONG

ROMPIN, Feb 14 ― Bandar Muadzam Shah is a picturesque, attractive town. It is the kind of town that people hope they could retire to. Like Taiping in Perak; or Muar in Johor.

What does it not have? A university, hospital, colleges, beautifully landscaped botanical gardens, nice schools, clinics, restaurants and in these days of slow growth and high unemployment, it helps that the cost of living is low.

But scattered within minutes of the beautifully tarred two-lane highways and leafy roads are communities and settlements of different tribes of the Orang Asli, people who have lived there for more than a hundred years in some cases. Maybe, it is an exaggeration to say the Orang Asli live there; they merely exist. 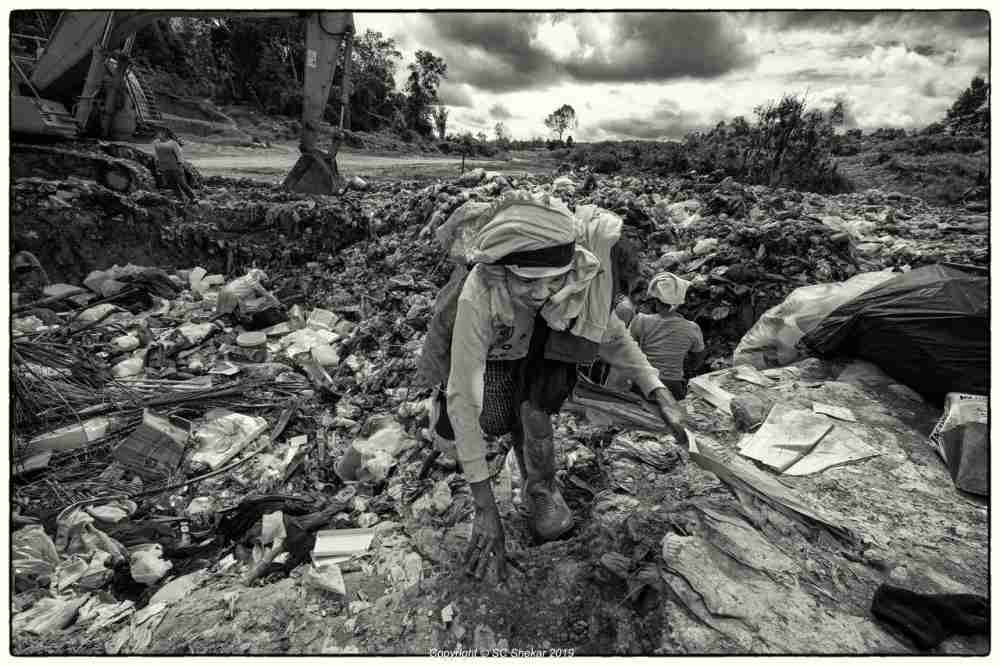 An Orang Asli woman is seen scavenging through the landfill. ― Picture by SC Shekar

In the four settlements we visited within a 10-15 minute radius of the charming town, only one had electricity and none had running water. In one of the settlements, houses using political parties’ plastic banners, presumably from the 2018 general elections, as their roofing and curtains for their windows, the Orang Asli, of the Jakun tribe, bath, drink, empty their bowels and cook from a stagnant pond. Barely yards away, along the highway, there is electricity and running water. The paradox, nay, the travesty and injustice, did not escape us.

But perhaps the one that tugged hardest at the heart strings was the lot of the Jakun in a landfill operated by a company whose board of directors are filled with Datuks, who did not respond to e-mails and letters to work with charitable groups willing to help the Orang Asli.

When we arrived there last week (February 3), it was apparently a good day for Bapak Motot. 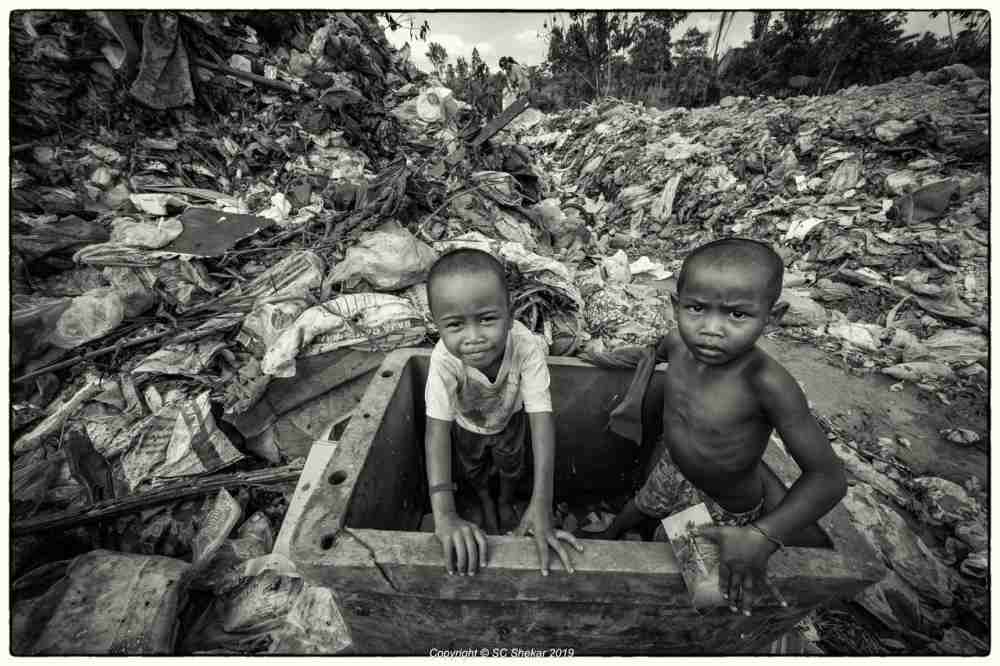 Orang Asli children are seen playing in the landfill. ― Picture by SC Shekar

A man in a red mini-lorry with several workers had come to buy the bags of recyclables that his community ― which includes children still feeding off the bottle ― had collected, scavenging through the landfill the past few days. The waste, unfortunately, includes hazardous bio-waste and syringes.

To Bapak Motot, as he refers to himself, it is pay-day for his people as they lift the litter bags separately filled with plastic, glass and metals, and place them on a weighing scale. The contractor, a mild looking goateed man from the town, will pay hard cash today. In a good month, Bapak Motok proudly states he can earn up to RM700 to feed his family.

That is as good a news that Bapak Motok will get on any given day.

A stone’s throw away, some 15 men, women and children huddle under a makeshift shelter, oblivious of the strong stench of decaying rubbish that fills the air. They are waiting for the scorching afternoon sun to set before venturing out again into the toxic garbage to separate the recyclables which they can sell. 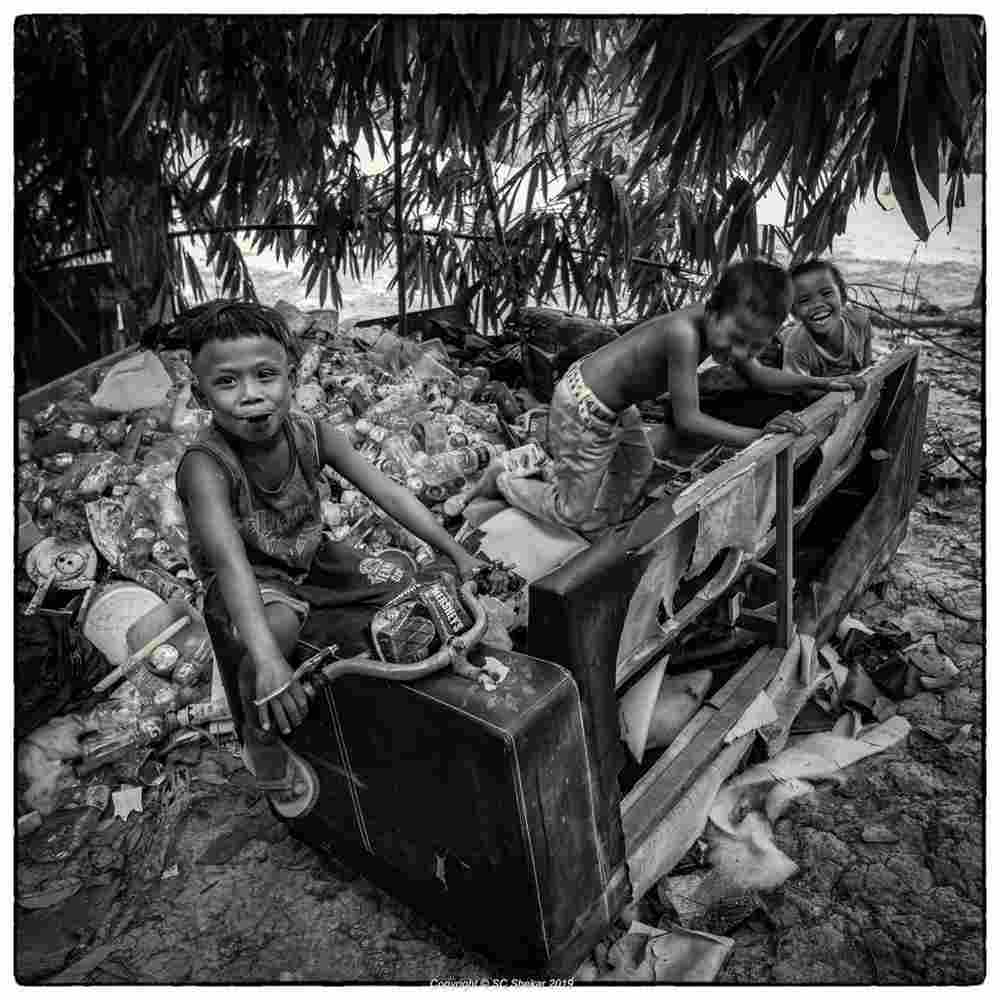 Orang Asli children are seen playing in the landfill. ― Picture by SC Shekar

This landfill, located in Bukit Ibam in the town of Muadzam Shah, has become a magnet for the Orang Asli in Pahang.

“This is considered easier work for them as they earn more money here than if they get work anywhere else,” says 71-year old Pak Long, who was our guide. He spoke reasonably good English as he had worked as a labourer in Singapore for many years.

Pak Long lives about 10 minutes away in another Orang Asli village called Kampung Teraling which has minimal electricity provided by a solar panel donated by an NGO. His village, too, has no running water. 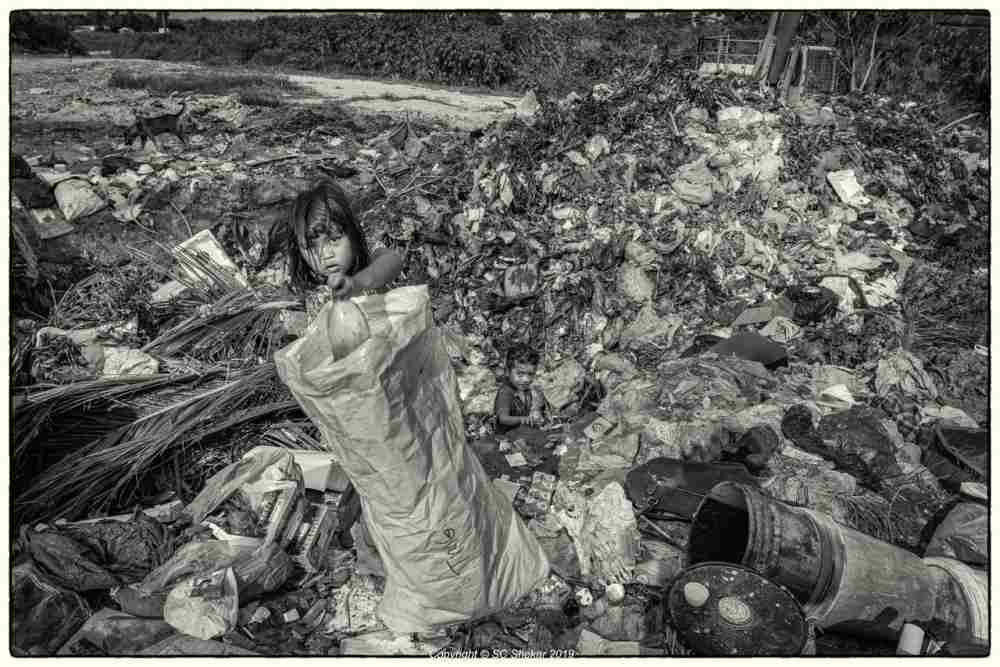 A child is seen scavenging through the landfill. ― Picture by SC Shekar

Pak Long, perhaps one of the few in his community who can read, does not approve of the way these families in the landfill live. He says it robs them of their dignity when young and old alike rummage through decomposing and toxic waste just to feed themselves.

The Orang Asli in the landfill have various skin ailments and fall ill too often. It is not surprising. They have no protective gear and when they leave the dump in the evenings, they have neither running water to clean themselves nor proper nutrition and proper shelter from the elements. This landfill, located in Bukit Ibam in the town of Muadzam Shah, has become a magnet for the Orang Asli in Pahang. ― Picture by SC Shekar

Bapak Motot, when asked why they brought the children to the landfill, said there was no one to look after them while their parents went through the landfill. The landfill not only serves as their playground but some of the kids, even as young as four, help their parents seek out recyclable materials. It is not a sight for the soft-hearted.

Prominent Malaysian photojournalist SC Shekar first chanced upon this community a year ago (February 2019) while researching the subject of water scarcity in the Muadzam Shah and Tasik Chini areas for his book on the Rivers of Malaysia. Both his wife, a lawyer, and he have since been helping the communities here supplying the families with food whenever they visit, and learning materials for the children.

They have sought help from others but while there are those who generously open their wallets to buy milk and foodstuff, none, save the government, can provide a long-term solution such as running water, electricity, education and a proper roof over their heads. 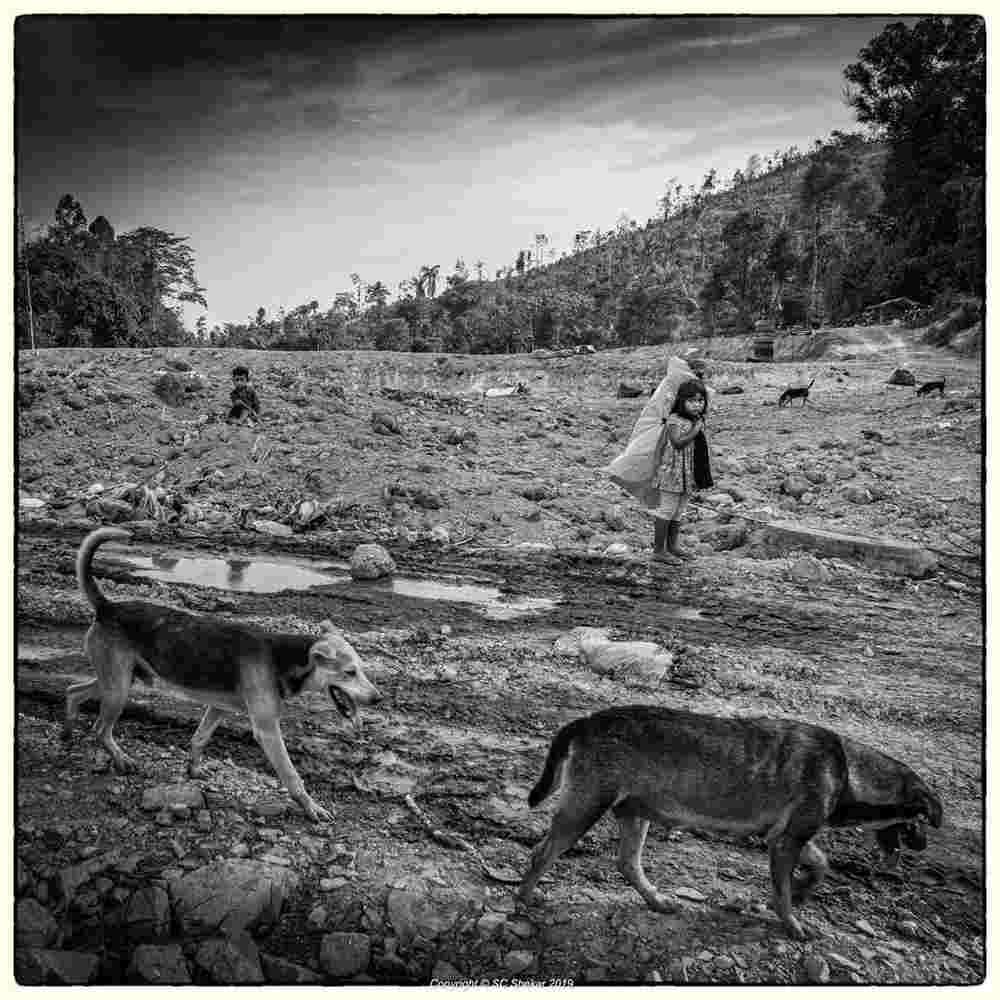 The scene at the landfill is a hint of much larger and complex issues faced by the Orang Asli, particularly the Jakun tribe in Pahang. ― Picture by SC Shekar

Shekar said he has visited many landfills in the slums of Southeast Asia. But neither he nor we expected that we would witness it in a country like Malaysia.

For Shekar, the sight of children, including toddlers, rummaging through garbage together with their parents, is what drove him to keep returning to these villages every few weeks, bringing foodstuff, medicine and milk for the children to help them.

“There were at least 25 children present when I first visited this landfill,” he said, adding that he was initially stunned and later, disgusted that such a situation could exist minutes away from the luxury of the finely manicured botanical gardens.

“These children run around barefoot amongst the garbage and are often injured by broken glass, rusty tin cans and other sharp objects. I have personally seen hazardous medical waste like syringes and items contaminated by blood as well.

“What is even worse is that bottle-feeding children have also been recruited to scavenge with their families. Needless to say, none of these children go to school, have proper nutrition or get any medical assistance. It is a disaster,” Shekar adds.

The scene at the landfill is a hint of much larger and complex issues faced by the Orang Asli, particularly the Jakun tribe in Pahang. Children runing around barefoot amongst the garbage are often injured by broken glass, rusty tin cans and other sharp objects. ― Picture by SC Shekar

The Jakun communities have traditionally lived near the jungle, and they have been reliant on jungle resources. Despite the authorities’ plan to resettle them into new villages with amenities under the Rancangan Pengumpulan Semula, (The Resettlement Plan) many have opted not to move from their familiar surroundings.

Some hunt or harvest resources from the jungles to feed their families or indulge in small-scale farming.

Yet, they live in abject poverty, where their homes are makeshift shacks made from a collection of tarpaulin, zinc and wood; there is no electricity, clean water and proper sanitation in their settlements but minutes away, the most modern amenities are there for the townspeople of Bandar Muadzam Shah. The travesty and tragedy is that the Orang Asli have lived in this area for centuries before development drove them deeper and deeper into the jungles. Today, there is not much jungle they can go as the development is on the fringes in every corner of their settlement. Except their own.

Dr Teh Su Thye, who runs the NGO Global Peace Foundation Malaysia has worked with the Orang Asli for a long time and knows their situation well. His non-profit organisation has worked with various Orang Asli communities nationwide but he says the Jakun of Pahang are probably the most impoverished.

In the last four years, Global Peace has been working in the Pekan and Rompin districts of Pahang, and addressed some of the basic needs in over 40 villages through its clean water and solar energy programmes.

Pak Long’s Kampung Teraling is one of the villages. Global Peace had helped the villagers build a well, install a solar-powered pump so that water can be piped to the centre of the village. 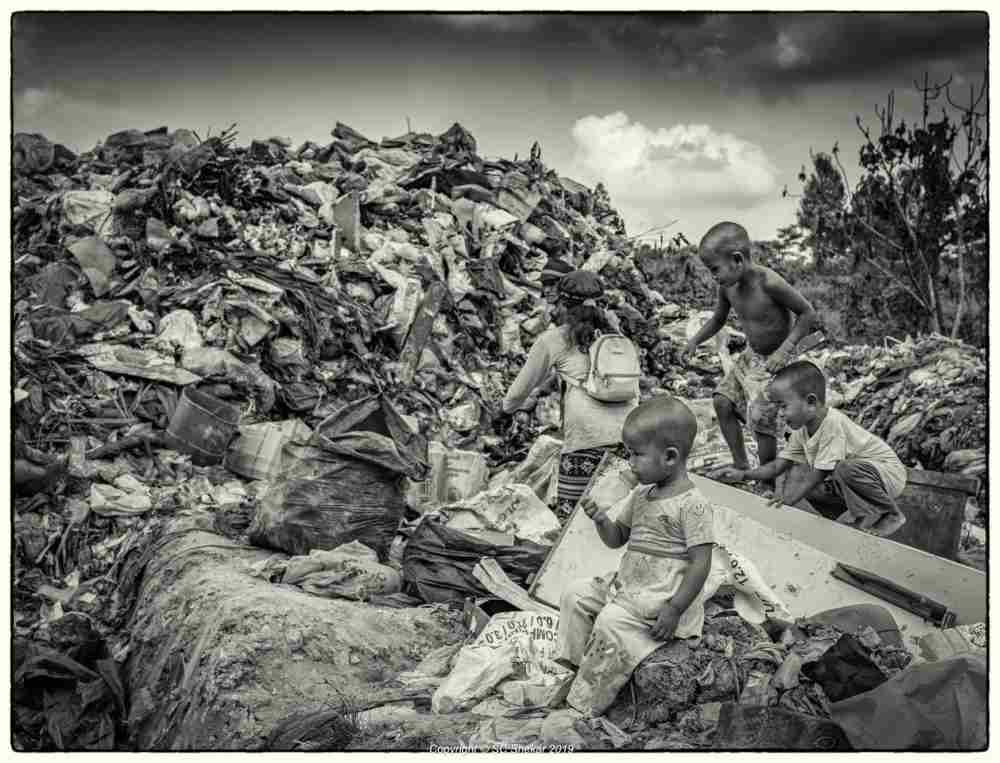 Children, including toddlers, rummaging through garbage in the landfill together with their parents. ― Picture by SC Shekar

“I no longer have to walk 600 steps to draw water from the well,” says Pak Long.

Apart from the lack of basic amenities, Dr Teh notes that illiteracy and school dropouts are other key issues faced by the Orang Asli. “More than 80 per cent of the children in these villages do not attend school due to poverty, distance to school and ignorance,” he says.

Like Pak Long, Dr Teh believes that education and capacity building are the tools needed to help the Jakun tribe enjoy a better and healthier life. “We need to offer them ways to diversify their livelihood that matches their lifestyle,” Dr Teh says.

However, finding and implementing a comprehensive and impactful solution for the Orang Asli requires collaborations between the public and private sectors.

Says Shekar: “Malaysians have a duty of care and the responsibility to render all the assistance to the Orang Asli community.”

Copies of the letter were sent to senior members of the government and leading members of society over the last two months but there was hardly a ripple. Neither the current federal leadership nor the state government nor the concession holders of the landfill, who live off the backs of the Jakuns, seem to care too much.

It is, as Shekar says, as if they prefer to pretend the Orang Asli do not exist ― Malaysia’s own forgotten people.

* Ruth Wong was a journalist for many years, working for local and international publications in Malaysia and Singapore. She is now an associate at the ECM Libra Foundation which funds and undertakes charitable work, particularly in education, with indigenous communities, in both east Malaysia and the peninsula, in particular the Orang Asli.