Lawyers Nizam Bashir (left) and K. Shanmuga speak to reporters at the Federal Court in Putrajaya February 13, 2020. ― Picture by Choo Choy May
Follow us on Instagram, subscribe to our Telegram channel and browser alerts for the latest news you need to know.
By IDA LIM

PUTRAJAYA, Feb 13 ― The Federal Court today in a majority ruling ordered for the government to remove the words “bin Abdullah” from a Johor-born illegitimate Muslim child’s name from his birth certificate, but also reversed a previous ruling that allowed the father’s name to be part of the boy’s name.

This was the majority decision by four of the seven judges on the Federal Court panel in this case, where the National Registration Department (NRD) was appealing against the Court of Appeal’s 2017 decision that had favoured the Muslim child.

In the majority ruling read out today by Court of Appeal President Datuk Rohana Yusuf, the Federal Court allowed the NRD’s appeal partly and set aside the Court of Appeal’s decision.

“Consequential order is made for the Director-General of National Registration to remove ‘bin Abdullah’ from the birth certificate of the first respondent,” she said.

She added that the child’s existing name will remain in the birth certificate, but without the words “bin Abdullah” attached.

The Federal Court’s majority ruling also said the Muslim child cannot carry his father’s name, as it was of the view that Malays do not have a surname and that a law allowing fathers to request for their surnames to be registered as the child’s “surname” does not apply to Malays.

The Court of Appeal had previously applied Section 13A of the Births and Deaths Registration Act to this Johor child’s case, and said the father should have been allowed to attach his name to the child’s name.

But in the Federal Court’s majority judgment, Rohana said the Court of Appeal had no legal or factual basis to allow this child’s name to carry his father’s name or “bin MEMK” by considering it to be a “surname”.

She cited expert opinion by three academics when saying that it is “clear as daylight that Malays do not carry any surname”.

“Thus, Section 13A of the BDRA has no application to the Malay naming system, hence it is not applicable to the Malays in Malaysia,” she said.

She then added the National Registration director-general was correct in law to disallow the father’s bid to have “bin MEMK” used in the child’s name, reiterating the majority judges’ view that this was due to Section 13A not applying to them due to Malays’ lack of surname.

When asked by senior federal counsel Suzana Atan to clarify if an entry for “Permohonan Seksyen 13” on the child’s birth certificate will remain, Rohana confirmed this by saying “The only thing to remove is bin Abdullah.”

The Johor Muslim couple given the initials of M.E.M.K and N.A.W and their child had filed their legal challenge via judicial review on September 3, 2015 against the National Registration Department, the NRD director-general and the government of Malaysia.

The Johor family had sought for the removal of the words “bin Abdullah” from his name in the birth certificate and also the removal of the “Permohonan Seksyen 13”, as both were indicators that gave away his illegitimate status to the public. Their lawyers had said they were not disputing or seeking to remove the child’s illegitimate status, but merely wanted to remove such indicators to prevent stigma to the child.

Was refusal to use father’s name reasonable?

The majority ruling by the four judges today also decided that the National Registration director-general acted correctly when refusing the application to let the Johor child take on his father’s name of “bin MEMK” and to remove the “bin Abdullah” portion in the birth certificate.

Rohana explained that the Johor-born child and his Muslim parents were bound by Johor’s state Islamic law, citing specifically Section 111 of the Islamic Family Law (State of Johor) Enactment 2003 which she said provides that an illegitimate Muslim child cannot be ascribed to his father’s name.

Section 111 which covers ascription of paternity states that a child’s paternity is established in a man unless the man disavows the child before court, in a situation where the child is born to a woman married to a man more than six months from the date of the marriage or within four years after the marriage is dissolved with the woman not having remarried.

Rohana then went on to say that the National Registration director-general could rely on Section 111 when refusing to replace “bin Abdullah” with “bin MEMK”, and that his refusal was not unreasonable as he was complying with the relevant written law and merely giving effect to the Islamic family laws applicable to the Johor family.

“It follows that the DGNR’s decision in refusing to ascribe the father’s name MEMK to the Child, was in compliance with the State Enactment of Johor and is not tainted with illegality, irrationally or procedural impropriety such as to warrant interference by the courts,” she said.

She added that the civil servant could not be faulted for applying the relevant personal law on the Johor Muslim family while performing his “administrative” duties.

In the Lina Joy case, a Malaysian woman born Azlina Jailani had sought to have her name changed to Lina Joy and to remove the word “Islam” from her identity card after it was inserted by the authorities, as she had renounced Islam.

Rohana today noted that the NRD had refused the woman’s application to remove the word “Islam” as it viewed the application as being incomplete without a Shariah court order certifying her renounciation of Islam.

“The majority decision held and found that the refusal of the NRD to act without the approval of religious Islamic authority was reasonable. That remains the legal position of this Country till today and there is no good reason for this court now to depart from that clear legal ruling made earlier by this court,” Rohana said when referring to the Lina Joy case.

Was there legal basis to impose ‘bin Abdullah’?

The majority ruling said that the National Registration director-general was wrong to decide on his own to impose “bin Abdullah” on the Johor-born Muslim illegitimate child’s name, as national-level fatwas on this issue had yet to be adopted and gazetted as law in Johor.

The National Registration director-general had made his decision following two fatwas or religious opinions issued by muftis or Islamic scholars via the National Fatwa Committee, including a 1981 fatwa which said the names of illegitimate Muslim children are to carry “bin Abdullah” or “binti Abdullah” regardless of whether their parents subsequently marry.

Rohana said however that the National Fatwa Committee’s fatwa or opinion can only become law in Johor if it has been gazetted in Johor’s state gazette as provided by Section 49 of the Administration of the Religion of Islam (State of Johor) Enactment 2003, and that the National Registration director-general had acted unreasonably in imposing a particular fatwa on the Johor family.

“In doing so the DGNR had indeed usurped the power of the Royal Highness the Sultan of Johor pursuant to the Johor Enactment as His Royal Highness is empowered to direct for gazetting which of the particular fatwa, before it can become binding on the subject (the Respondents),” she said, adding that the director-general could not “unnecessarily impose” the National Fatwa Committee’s fatwa on the Johor family as no fatwa on how to name an illegitimate Muslim child had been gazetted in Johor.

The majority ruling also said the director-general had also usurped the authority of the Johor fatwa committee by imposing “bin Abdullah” on the Johor-born illegitimate Muslim child.

“Since the Fatwa Committee of Johor had not adopted this fatwa of the National Fatwa Committee, the DGNR cannot on his own, decides which of the differences in views is applicable to the Respondents. Thus the DGNR had no basis in law to impose the naming of ‘bin Abdullah’ in this case and such a decision is subject to be impugned,” she said, referring to the Johor family as respondents.

The Federal Court majority ruling went on to conclude that the National Registration director-general may refer to and rely on sources of Islamic law on legitimacy when performing the task of registration of births of Muslim children.

The three dissenting judges on the seven-man panel instead said that the National Registration Department’s appeal should be dismissed and that the Court of Appeal decision should be upheld.

In dissenting, Chief Judge of Sabah and Sarawak Tan Sri David Wong read out the reasons in his minority judgment, while Datuk Nallini Pathmanathan provided her grounds in a separate minority judgment that was agreed by her fellow Federal Court judge Datuk Abang Iskandar Abang Hashim.

Nizam Bashir, one of the lawyers for the Johor child, said the judgments for this case regarding “bin Abdullah” including at the Federal Court level today were the first of their kind in the country.

When touching on how one of the illegitimacy indicators would be removed for the Johor child, Nizam said: “Well, I believe the parents should be satisfied. They may not be entirely happy with the outcome, but I think they should be quite satisfied with the outcome in the sense that at the very least, it’s not patently obvious that the child has to take the status that the child has, because there is no ‘bin Abdullah’ next to the child’s personal name.” 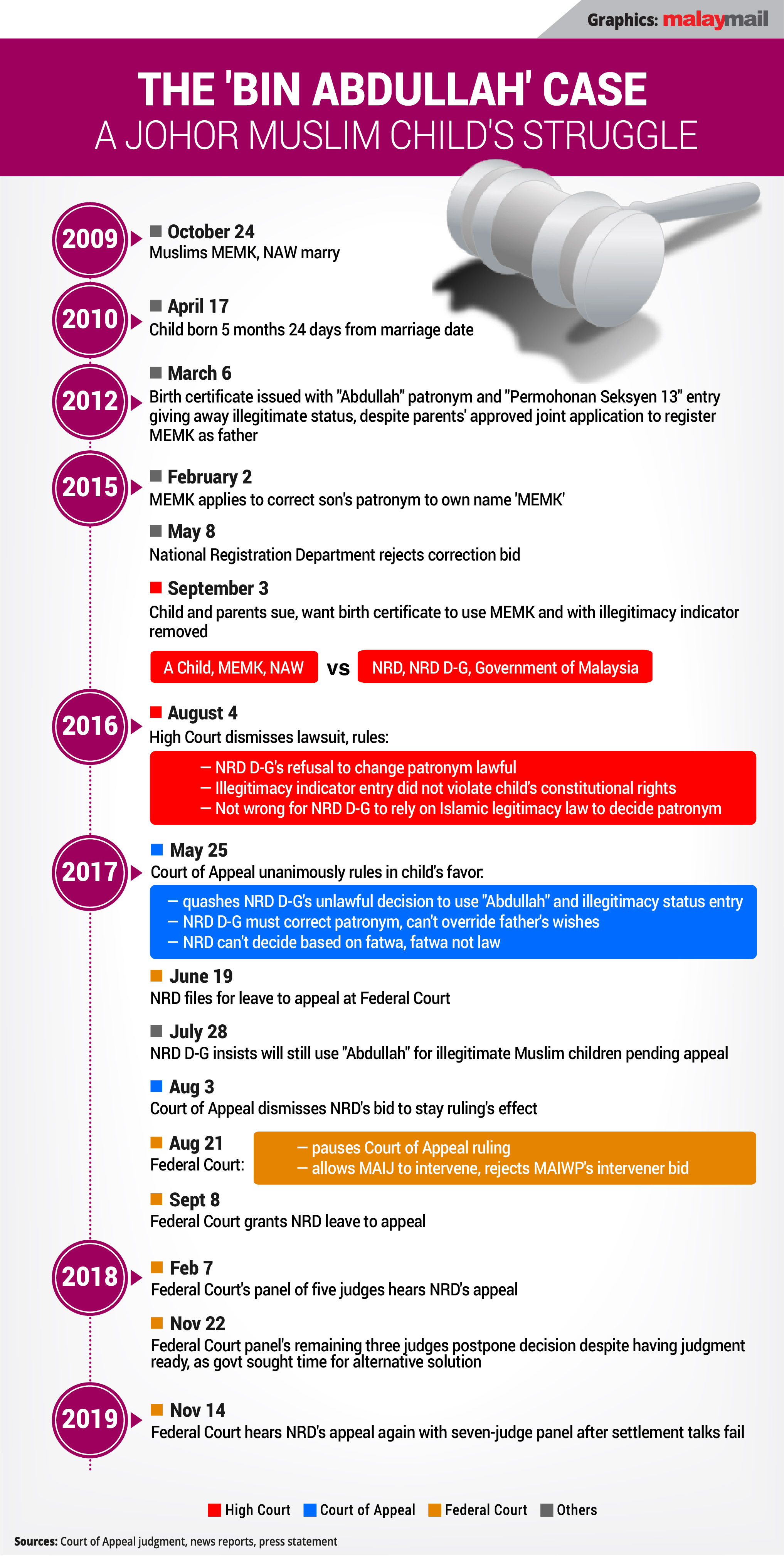