Party Keadilan Rakyat members who are against PKR vice-president Zuraida Kamaruddin hold banners and shout slogans as they gather outside the party headquarters in Petaling Jaya January 29, 2020. — Picture by Yusof Mat Isa
Follow us on Instagram, subscribe to our Telegram channel and browser alerts for the latest news you need to know.
By RADZI RAZAK

PETALING JAYA, Jan 29 — Supporters and detractors of PKR vice-president Zuraida Kamaruddin had a tense standoff in front of the party’s headquarters here today, where she was expected to be present to reply to her show-cause letter over remarks made against party leaders in a speech in December

Waiting since 11.30am, the anti-Zuraida group numbered more than 200 and mostly appeared young.

They paraded banners calling for Zuraida’s sacking and wore sky blue T-shirts with the word “Pecat Mak Lampir”, referring to the derogatory nickname from an Indonesian ghost attributed to her.

Their leader Zainurizzaman Moharam claimed that they are from Gerakan Reformis Keadilan (Gerak) a PKR-friendly grassroots non-governmental organisation.

He said Gerak is here to hand a memorandum to the party’s disciplinary board urging them to sack Zuraida.

“We represent all Keadilan members across Malaysia and stand firm behind PKR president Datuk Seri Anwar Ibrahim. We want action to be taken against Zuraida for attacking, insulting and giving a negative perception towards the party president,” he told reporters. 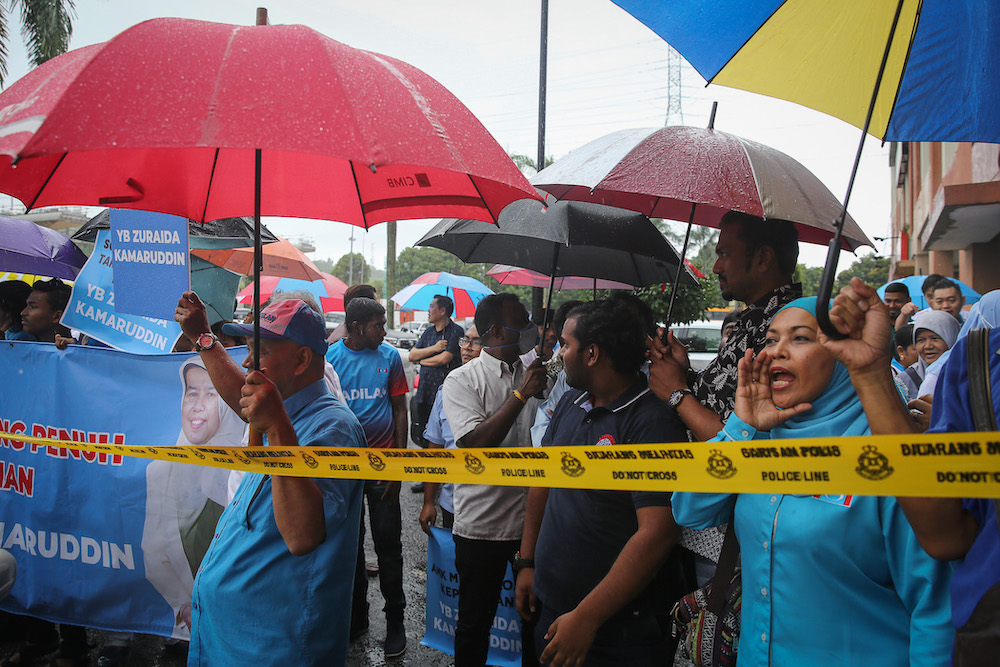 Meanwhile, Zuraida’s supporters numbered about 80 waited at Hotel Media nearby the headquarters and also carried banners.

At 12.30pm Zuraida’s political secretary Nor Hizwan Ahmad showed up and together with the supporters marched 30 metres in the rain towards the party headquarters.

About a dozen police officers from Petaling Jaya kept both supporters separated and only allowed Nor Hizwan and three others to submit Zuraida’s response to the party’s show-cause letter issued to her on January 18.

Nor Hizwan came back at about 1pm and said Zuraida is currently attending a Cabinet meeting in Putrajaya but has responded to all three points given by the party. However both sides refused to give details on what the points are.

“I can say that Zuraida was able to respond calmly because everything she said in her speech including at the Renaissance dinner was true and as the elected vice-president, she took the responsibility to answer the letter,” he said.

Both supporters continued to trade barbs and insult before dispersing at 1.40pm.

Yesterday, PKR secretary-general Datuk Seri Saifuddin Nasution Ismail said a show-cause letter was issued by the party’s disciplinary board, while the letter of demand against Zuraida was personally filed over alleged defamation made against him.

The party’s disciplinary board has reportedly begun investigating various reports of misconduct involving senior party members and leaders including Zuraida, believed to be related to the incident during and after the 2019 PKR National Congress in Melaka last December.

On January 22, a group of 46 PKR leaders came out in defence of Zuraida and demanded that the party drop all disciplinary proceedings against her.

The faction affiliated with PKR’s deputy president Datuk Seri Azmin Ali and Zuraida consisting of 15 MPs and 28 state assemblymen, said the show-cause letter against her was issued in bad faith.