How BN might have won GE14... had Cambridge Analytica stayed alive

Tun Dr Mahathir Mohamad reacts during a news conference in Petaling Jaya May 10, 2018. — Reuters pic
Follow us on Instagram, subscribe to our Telegram channel and browser alerts for the latest news you need to know.
By ZURAIRI AR

KUALA LUMPUR, Jan 3 ― On May 9, 2018, millions of Malaysians went to the ballot boxes and, for the first time in six decades, the country had a change of government as Barisan Nasional (BN) was handed a shocking loss.

But things might have been different if controversial big data firm Cambridge Analytica (CA) and its parent, SCL Group, not imploded from a data harvesting and election manipulation scandal, causing both to declare bankruptcy on May 2... just one week prior to the 14th general election (GE14).

Documents involving the attempts of SCL Group’s South-east Asian subsidiary to influence voting in GE14 were previously leaked by the Merdeka Papers in March 2018, two months before the election.

On New Year’s Day this week, former CA employee Brittany Kaiser leaked more documents obtained between 2014 and 2018 for the first time to the public, shining new light on SCL and CA’s arguably failed venture with BN.

“In the name of shedding light on these dark practices, I am releasing documents and emails in full for the public good. I do this to strengthen the case for data rights and enforcement of our electoral laws online globally.

“We should all be seeking a more ethical digital future for ourselves and our children,” Kaiser said in a statement.

Democracy has been hacked.
Let's learn from our mistakes.#Hindsightis2020 pic.twitter.com/6P6wjlBgFv

When news broke that CA and SCL had dealings in Malaysia, the BN administration was quick to point fingers at Datuk Mukhriz Mahathir as the main link, since SCL South-east Asia’s director, the late Azrin Zizal, was the former Kedah Umno chief’s media officer until 2013.

It has been confirmed that Azrin died in April last year of lymphoma.

Azrin had also claimed that he worked for Mukhriz personally and provided communications and strategy advice for him until 2015, including during the 2013 general election. Mukhriz denied the claims.

None of the many new documents leaked this week made any mention of Mukhriz, and the documents showed that Azrin only acted as SCL director since 2016.

However, under Azrin’s tenure, SCL first approached Datuk Seri Ahmad Zahid Hamidi, then deputy prime minister and Umno deputy president, to facilitate his attendance and speech at the Concordia Summit in New York on September 19 and 20, 2016.

Zahid was then heading the Putrajaya delegation to the 71st session of the United Nations General Assembly and on a working visit in New York between September 19 and 25. His speech at the UN was later panned for his shaky English delivery. 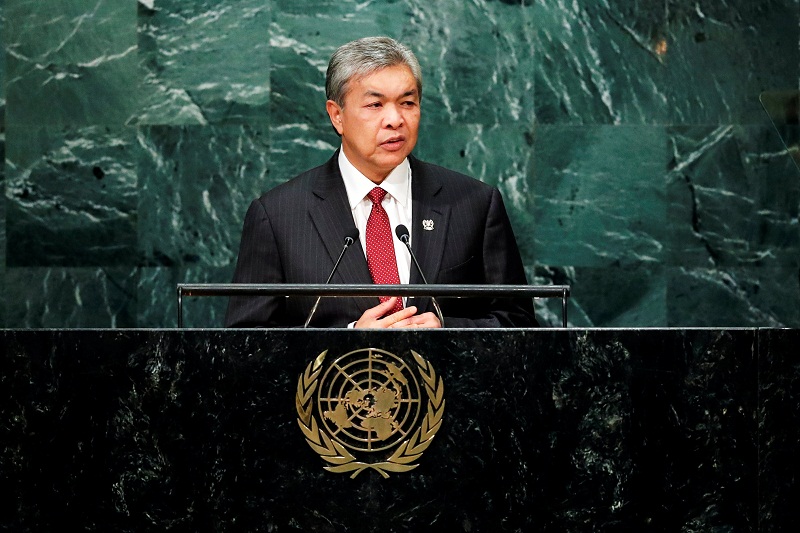 The Merdeka Papers had described Concordia as “a more right-wing version of the Clinton Global Initiative”, and CA chief executive Alexander Nix would also deliver his keynote speech at the summit.

In a leaked email thread on September 6, London-based SCL employee Tee Ganbold Edwards said Zahid would contribute to the “Intelligence from Open Sources: Partnerships for International Security” dialogue, and asked whether the firm or the event organiser will be covering Zahid’s accommodation while in New York.

“The Malaysian Government Officials normally stay at St Regis New York, but the Grand Hyatt also works,” Edwards wrote. A stay in the former starts at around RM3,600 per night, while the latter around RM850 per night.

While Zahid was in New York, SCL also planned for a courtesy call on the side between him and Mark Turnbull, then the managing director for CA’s non-United States political division, SCL Elections.

In a September 16 email, Azrin said he was dealing with Zahid’s political secretary directly to secure the meeting, preferably for a breakfast encounter. It is unclear if this ever took place.

However, SCL had referred to the meeting as part of its outreach for its SCL Elections subsidiary, which it claimed “has an unrivalled track record in political campaign management and worked on more than 100 campaigns across five continents over 25 years”.

A month later, Azrin began proposing a week of meetings with key BN figures and Malaysia’s captains of industry to pitch SCL’s services.

In the first proposal of SCL’s itinerary for Malaysia, Azrin had suggested for the SCL team to attend the Selangor BN Elections Candidates’ Retreat in Port Dickson on October 7 to 9, 2016.

The programme was to be launched by Selangor Umno chief Tan Sri Noh Omar, and Turnbull was set to deliver a session on October 8, titled “Leadership branding around the world; case studies and method for branding”. Zahid would have closed the event on the last night.

These meetings and visit to Port Dickson would later be omitted in the final draft of the itinerary.

Hazali’s meeting was “to bring recommendations to Umno Youth exco meeting”, said a note by Azrin in the itinerary.

A supper in the posh Mandarin Oriental KL on October 10 was also planned with Datuk Seri Aminuddin Mustafa on behalf of Tengku Adnan “to evaluate SCL’s services and success stories”, said the same note.

In a leaked email dated October 4, Azrin had noted that Tengku Adnan and Aminuddin had requested for SCL to prepare a proposal along with the cost needed for the firm’s services to help BN’s campaign in 40 Parliamentary seats.

The proposal also needed to include a timeline for the whole exercise involving all seats, suggestion of the number of enumerators needed for the exercise, and a list of requirements that the local partner would need to prepare.

As an aside, Azrin noted that: “the costing sheet be separated as there will be cost adjustments when presented to the minister.”

It is also unknown if these meetings ever happened, and whether BN had decided to engage SCL’s services for the election.

However, one of the leaked documents was a copy of Turnbull’s hotel voucher for Mandarin Oriental’s “deluxe room city view” for five nights from October 7 to 12, 2016, suggesting that plans to proceed were afoot.

By October 5, Azrin had requested for more funding from SCL for his operations, saying: “I realise that there is already a referral agreement in place between me and SCL Group however, would it be possible to add on another 10 per cent to our costs to kick start SCL Southeast Asia?”

The long history of BN and Cambridge Analytica

Prior to Azrin, the previous director of SCL in charge of Malaysia was Shahid Shayaa, who identified himself as senior private secretary to the Minister in charge of Performance Management Delivery Unit (Pemandu), Datuk Seri Idris Jala. 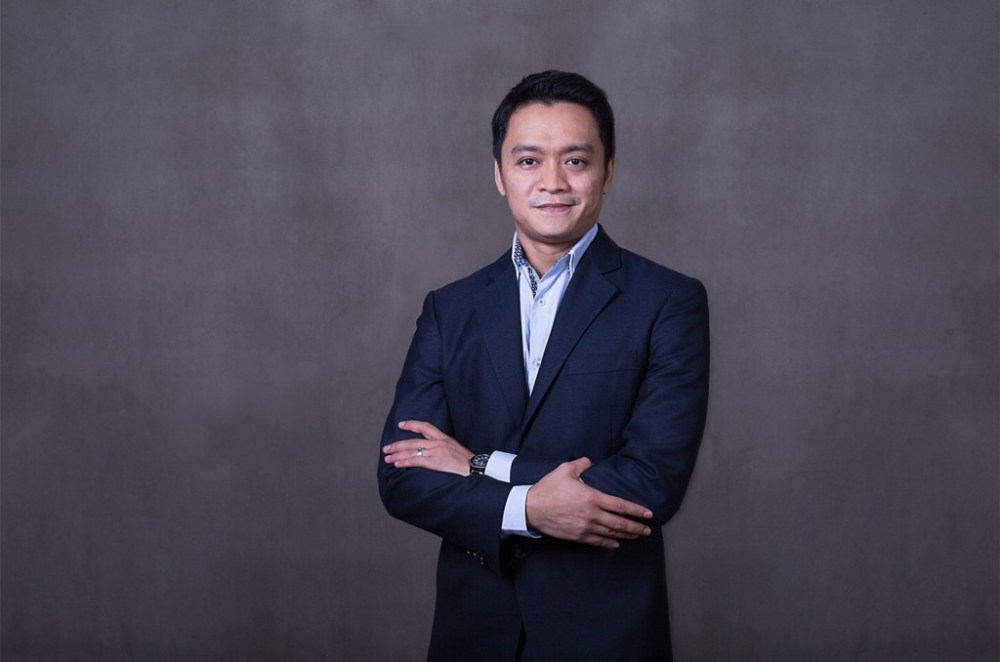 Later when he founded social analytics firm Berkshire Media, the firm was engaged by BN in 2012 for its integrated political campaign for 13th general election which included “signature SCL techniques”, according to the Merdeka Papers.

A leaked May 2014 proposal by SCL Commercial to state oil and gas giant Petronas Bhd titled “Winning the perception game for Petronas” detailed Berkshire and Shahid’s past involvement with BN.

It said the communication campaign involved centralised command centre integrating more than 100 team members or leaders working in different cells and units to carry the same messaging throughout the year, involving analysing more than 100 hot topics from social media.

The campaign also created a brand new identity for BN, “Better Nation”, to appeal to young voters and fence-sitters ― in addition to extensive use of paid media” and more than 200 to 300 creative artworks including political posters.

The Better Nation brand died off after GE13, but its Facebook page has up until now shared anti-Pakatan Harapan posts. It is unknown who is managing the brand now.

According to Merdeka Papers, while presented on the surface as intended primarily to “improve Petronas’s reputation and corporate social responsibility and communications” SCL sources revealed this campaign had from the start meant “to deliver a psychographic political data model and campaigning tools for the use of BN”.

In the September proposal, SCL said this programme would contribute towards enhancing the public perception of both Petronas, and then BN administration.

The #MerdekaPapers offer us a case study on the overlap between a political party (Barisan Nasional), the intelligence services (Special Branch), the petro-state (Petronas), and SCL, thanks to its approach of seeking to blur the boundaries between commercial/political work/data. pic.twitter.com/H3alHrjz4S

Malay Mail is seeking comments on the matter from the individuals and firms named in this story.

In March 2018, CA came under intense scrutiny after The New York Times and The Guardian newspapers reported that the company had used data obtained from roughly 50 million Facebook users without their permission.

The reports alleged that the Cambridge Analytica used this data to manipulate voting sentiments, and led to investigations in both the US and the UK.

The social media platform suspended the firm and hired forensic auditors to find out if CA had misused the data.

Both CA and SCL closed shop and started insolvency proceeding in May 2018.

Turnbull has since started a similar firm to CA, the London-based Auspex International.

Azrin had been listed as a director for ZRCAM Pte Ltd since March 2015, “managing private relations with high net worth clients for a private placement fund company in the Labuan Offshore Financial Centre”.