Datuk Seri Wan Ahmad Wan Omar is seen at the Kuala Lumpur High Court December 11, 2019. — Picture by Firdaus Latif
Follow us on Instagram, subscribe to our Telegram channel and browser alerts for the latest news you need to know.
By IDA LIM

KUALA LUMPUR, Dec 11 — Funds amounting to RM360,000 from then deputy prime minister Datuk Seri Ahmad Zahid Hamidi via charitable fund Yayasan Akalbudi were fully spent on efforts to help the then Barisan Nasional administration sign up new voters, and were not used to print the Muslims’ holy book Quran, a witness told the High Court today.

Wan Ahmad confirmed that RM360,000 made its way via two cheques in 2015 and 2016 to the company TS Consultancy & Resources for the purpose of helping then ruling party BN to register new voters, adding that these funds were spent only on the company’s operating costs and related costs on the field during voter registration exercises.

Zahid’s lawyer Datuk Ahmad Zaidi Zainal then showed Wan Ahmad photocopied excerpts from copies of Al-Quran that were purported to be printed with the aid of the RM360,000.

Zaidi: The RM360,000 that was paid or given as a contribution to TS, part of it is to pay for the cost of printing this Quran, do you know or not?

In the photocopied excerpt, an organisation known as Yayasan Restu was stated as making a note of appreciation and thanks to a list of individuals including Datuk Abdul Latiff Mirasa as the chairman and member of Yayasan Restu’s board of trustees.

Wan Ahmad, who said he had never sighted the excerpt, also confirmed that he had never heard of Yayasan Restu and did not know who Abdul Latiff was.

When suggested by Zaidi that the printing of the Quran was done by Yayasan Restu, Wan Ahmad said he did not know.

Wan Ahmad also disagreed when suggested by Zahid’s lawyer Hamidi Mohd Noh that he could have been mistaken about the use of the RM360,000 cheques.

Wan Ahmad later confirmed to the prosecution that there is no link between Yayasan Restu and TS Consultancy. 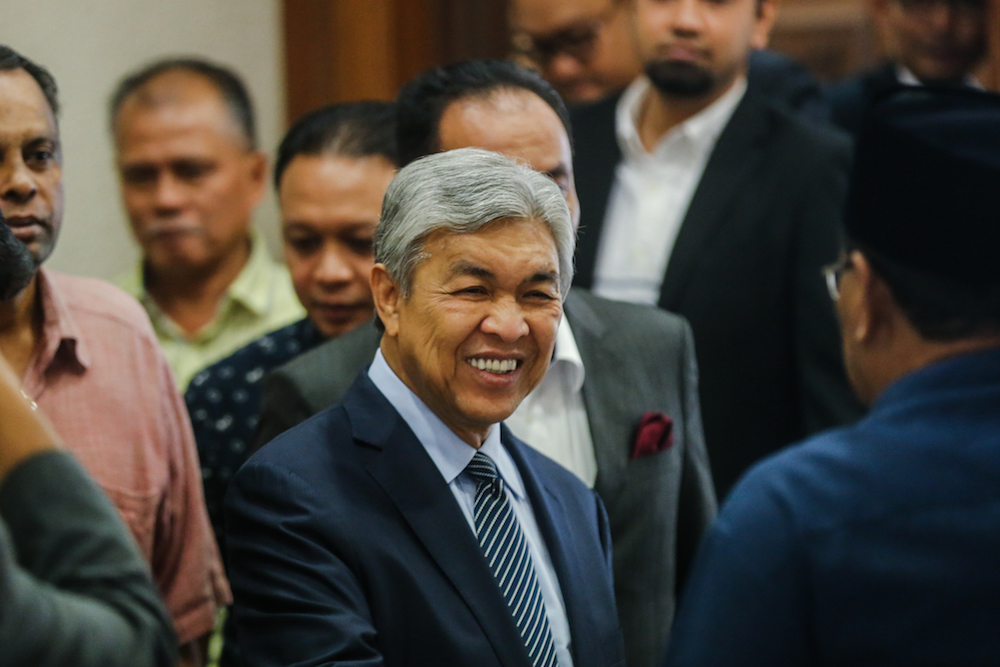 Was the company needed?

Hamidi suggested that BN did not need TS Consultancy to help register new voters as political parties could allegedly do so on their own, but Wan Ahmad disagreed.

Wan Ahmad had earlier today pointed out that the EC had changed its policy sometime around 2013 to 2015 and decided to no longer allow political parties to carry out their own voter registration work.

Wan Ahmad said that following the EC’s change in policies, a consistently high number of four million eligible Malaysians who had yet to register was detected in the years of 2014 and 2015.

“Because at that time when TS was formed, there were about four million Malaysians that had yet to register, the figure was too big. So the government decided that other methods have to be used to register those yet to register as EC no longer allowed political parties to register.

“So the easiest way at that time is for me to form a company TS where we could appoint a few officers and contract workers. This was the quick method to carry out work in the field and we do work continuously where the officers went to the ground each week throughout the whole country according to the areas that have been identified where the record of registrations is too low,” he explained, confirming that TS’ work continued after Zahid replaced Muhyiddin as deputy prime minister in 2015.

Wan Ahmad disagreed that it was wrong to set up such a company to speed up the voter registration work.

One of TS’ officers, Sabri Said, was a former EC official and also an assistant registrar who had the authority to register new voters, he said.

He also explained that the company’s voter registration work saw them helping to gather eligible voters at a comfortable place along with provision of transport for those in villages, while food for those to be signed up as voters were prepared by those assisting the company such as political parties or government agencies.

Wan Ahmad disagreed that funds were spent to assist in “welfare” work or to provide contributions for the eligible voters, saying it was restricted only to matters such as transportation and food on the day itself when they are being signed up.

Wan Ahmad again insisted that the RM360,000 was spent on field work for the voter registration, including transportation, accommodation, allowances and salaries of the company’s officials.

In this trial where Zahid is facing 47 charges, the prosecution had said it would prove that Zahid had misappropriated RM31 million from charitable organisation Yayasan Akalbudi which were then allegedly not used to benefit the poor but for other purposes.