Can (and should) Malaysia sue Indonesia over transboundary haze?

A firefighter extinguishes a fire in a forest at Rambutan village, in Ogan Ilir, South Sumatra province, September 11, 2019. — AFP pic
Follow us on Instagram, subscribe to our Telegram channel and browser alerts for the latest news you need to know.
By IDA LIM

KUALA LUMPUR, Sept 17 ― A group of Malaysian professionals have suggested that Malaysia launch a lawsuit against Indonesia at the International Court of Justice (ICJ) for a symbolic RM1 over open fires and the haze problem, but lawyers say that this move is not feasible.

Other legal action ideas against Indonesia may also not be viable or likely, with the lawyers instead pointing out that the actual or feasible solution is for Malaysia to introduce a law to go directly after companies or individuals who add to the annual haze problem.

Why the ICJ option doesn’t work

Lawyer Lim Wei Jiet said the first scenario would not apply as the treaty on transboundary haze pollution ― that Malaysia and Indonesia had signed ― does not provide for disputes to be sent to the ICJ.

“Malaysia and Indonesia are parties to the ASEAN Agreement on Transboundary Haze Pollution, whereby each state party are supposed to ensure that its neighbours are not harmed by pollution stemming within its territory.

“However, Article 27 of the Agreement states that any dispute 'shall be settled amicably by consultation or negotiation'. Therefore, Malaysia cannot invoke ICJ’s jurisdiction via this Agreement,” the secretary-general of the National Human Rights Society (Hakam) told Malay Mail when contacted.

“That leaves us with the other option, namely if Malaysia can come into an agreement with Indonesia to submit to ICJ’s jurisdiction in respect of Indonesia’s liability for the transboundary haze,” he said, but noted that Indonesia is “unlikely to agree” as it would want to “protect its sovereignty”.

While Malaysia is likely unable to have such a lawsuit heard at the world court, Lim said the country can still try to obtain “an advisory opinion from the ICJ on the issue of Indonesia’s liability for transboundary haze”.

“However, only the General Assembly, Security Council or several other organs of the United Nations have the capacity to request the ICJ for an advisory opinion ― Malaysia therefore has to lobby for the same through these organs,” he said, noting that advisory opinions are not legally-binding but carry “great legal weight and moral authority”.

Lim said there are no regional courts for Malaysia to pursue a case against Indonesia, such as the European Court of Human Rights or the Inter-American Court for Human Rights in the West.

“Malaysia and Indonesia have also not signed any treaty to allow disputes to be settled via international tribunals such as the ICJ,” he said.

Like Lim, constitutional lawyer Surendra Ananth said the proposal to refer a possible dispute between Malaysia and Indonesia to the ICJ is not “realistic”, as the two situations that would allow the ICJ to have jurisdiction do not apply.

“There is no binding treaty where Malaysia and Indonesia are parties which refers to the ICJ. The ASEAN Agreement on Transboundary Haze has no such clause. To the contrary, Article 27 requires parties to settle disputes by consultation or negotiation,” he said of the first scenario.

He also did not think the second scenario, that Indonesia would agree to letting the ICJ adjudge the haze issue, would happen.

Despite that, Surendra said Indonesia is still obliged under customary international law to prevent transboundary harm.

What about Malaysian or Indonesian courts?

When asked if Malaysia could sue Indonesia in local courts, Lim said that no one ― including the Malaysian government ― would be able to do so.

Lim confirmed that Malaysians or Malaysian civil society organisations could try suing Indonesia in Indonesian courts, but said it is very unlikely for the Malaysian government to pursue such a route even if allowed under Indonesian laws due to diplomatic reasons.

“Asean has always abided by a non-interference policy in almost every issue and prefer to solve problems through negotiations rather than taking a litigious approach,” he said.

Can the Malaysia government take any legal action at all?

While Malaysia has pinpointed open burning and forest fires in Indonesia as the root cause for the regional haze problem, Indonesia’s claim of having sealed off land of Indonesian plantation subsidiary companies ― that are ultimately owned by Malaysian companies for suspected fires ― suggest that Malaysian firms could be part of the problem.

Lawyer New Sin Yew noted Malaysia lacks laws to “hold the executives and directors of these corporations accountable whether they are in Indonesia or Malaysia”.

“What we need is a Transboundary Haze Pollution Act like in Singapore so that we can make these perpetrators responsible,” he said.

“We suffer from the haze every year and people are dying. Why hasn’t the government enacted such a law so that they can enforce it? Are they going to let the perpetrators continue doing this while we continue to suffer?” he asked.

Singapore’s Transboundary Haze Pollution Act outlines criminal offences of causing or contributing to haze in Singapore, with hefty fines against companies of up to S$100,000 (RM303,190) for every day of the haze pollution coinciding with those actions, and that can go up to a total maximum aggregate of S$2 million.

Singapore law also outlines civil liabilities or situations where a company can be sued for contributing to haze that causes losses, disease or death of a Singaporean.

New said the Singapore law can be a “useful starting point” for Malaysia, but suggested that Malaysia introduce an enhanced version that would allow action to be taken against individuals and to also allow the harsher penalty of jail.

“Currently there is nothing in the law which makes it an offence if someone, regardless of nationality, engages in a conduct in Indonesia or anywhere outside Malaysia that caused or contributed to a haze pollution in Malaysia. 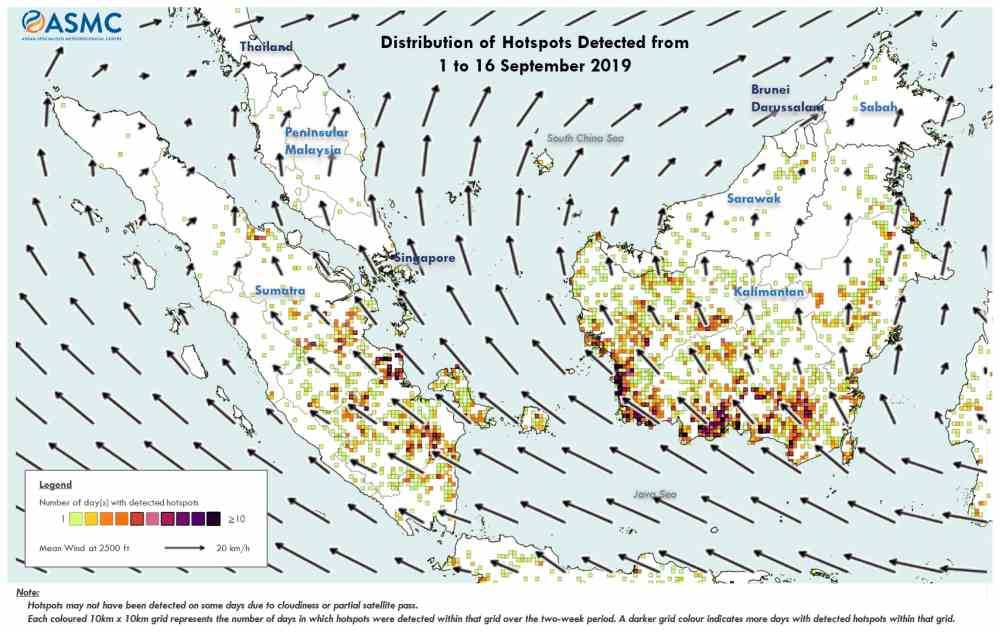 Distribution of hotspots detected from September 1 to 16, 2019. ― Picture via ASMC

Likewise, Hakam’s Lim said the Malaysian government has not made any laws “to hold Malaysian companies accountable for pollution within Malaysian territory caused by its activities overseas”, and suggested that Malaysia adopt or model such a new law on Singapore’s Transboundary Haze Pollution Act 2014.

“Beyond lodging a diplomatic complaint and pursuing avenues through the ICJ as stated earlier, Malaysia must double-up to provide firefighting assistance to Indonesia. Malaysia should also enact a transboundary pollution Act to hold Malaysian individuals and companies accountable ― that is the very least we can do,” Lim said.

Surendra said the solution of the Malaysian government taking action against subsidiaries of Malaysian companies was “realistic”, saying that this is possible using existing laws.

He cited the Criminal Procedure Code’s Section 127A, the Courts of Judicature Act’s Section 22 which grant Malaysian courts “extraterritorial jurisdiction” over offences ― which cover offences under any written laws that are certified by the attorney-general to affect national security ― committed by persons overseas against Malaysians, and the Environmental Quality Act 1974 as legislation allowing for legal action.

“Of course the parent companies will use the separate legal entity argument to avoid liability. But there are currently a number of cases that are being litigated around the world where parent companies are made liable for human rights violations of their subsidiaries in other states. Maybe it’s about time the Malaysian government take this problem seriously and act,” he said.

Surendra said Singapore’s Transboundary Haze Pollution Act allows the country to go after parent companies that participated in the management of its subsidiary to the extent described under the law, which he said might be “difficult to prove” and that it should be made easier for such companies to be held accountable.

“My view is that the parent company should be made liable on a lower threshold ― that is if they knew or ought to have known of the activity of the subsidiary,” he said of the version that Malaysia could use if it enacts such a law.