BY IDA LIM AND DANIAL DZULKIFLY

“I had a call this morning about 7.30am from my client and wife.

“But the news is that the conjunctivitis has revisited and I think it’s because of yesterday’s outing that he went and the haze does not help,” Shafee told the judge.

Today was scheduled to be the seventh day of Najib’s 1MDB trial.

The 1MDB case is Najib’s second case to go on trial.

Najib is facing 25 charges in this case: four counts of abusing his position for his own financial benefit totalling almost RM2.3 billion allegedly originating from 1MDB and the resulting 21 counts of money-laundering.

Shafee today told the judge that Najib wanted to see a doctor as early as possible today, but the specialist based at the Gardens Midvalley could only attend to him at 10.30am.

The judge noted that it was “unfortunate”, adding that the trial would either resume tomorrow or next Tuesday depending on the length of medical leave issued. Next Monday is Malaysia Day, which is a public holiday.

Najib’s 1MDB trial is currently scheduled to run from Monday to Thursday every week until mid-November excepting public holidays.

The judge today suggested that the 1MDB trial also be heard on two Fridays to make up for lost time, but both the defence and prosecution said they have other court cases fixed on Fridays.

The court is expected to be updated later today on the number of days for Najib’s medical leave.

Also present in the court lobby were around 40 of Najib’s ardent supporters, some of whom came from Pahang to show their support.

Some arrived at the national capital yesterday and had waited at the courthouse grounds as early as 6am.

Facing yet another long and “tiring” trial, a supporter who asked not to be named said they had gathered today in hopes of raising Najib’s confidence.

“Many people still support Bossku Najib. We want to show Datuk Seri (Najib) our support for him. Hopefully this small gesture of encouragement will help him through such a long trial,” he told Malay Mail.

After learning that Najib would not be able to show up for his trial today, his supporters dispersed and left the Kuala Lumpur Court Complex.

Deputy public prosecutor Ahmad Akram Gharib later confirmed to Malay Mail that the 1MDB trial will resume next Tuesday as a two-day medical certificate had been issued.

Shafee this afternoon confirmed to Malay Mail that his client has been given a medical certificate for two days.

This is the second trial in which Najib’s eye ailment has caused a delay.

At the tail-end of the prosecution’s case in Najib’s first trial involving 1MDB former subsidiary SRC International Sdn Bhd, the court had also deferred a hearing as he submitted a medical certificate for suspected infectious conjunctivitis in both eyes.

The scheduled trial on August 14 for the case involving RM42 million of SRC funds had to be paused then for three days to allow Najib to recuperate.

For the SRC case, the prosecution had late last month closed its case and the High Court will be delivering its decision on November 11 on whether Najib has to enter his defence. 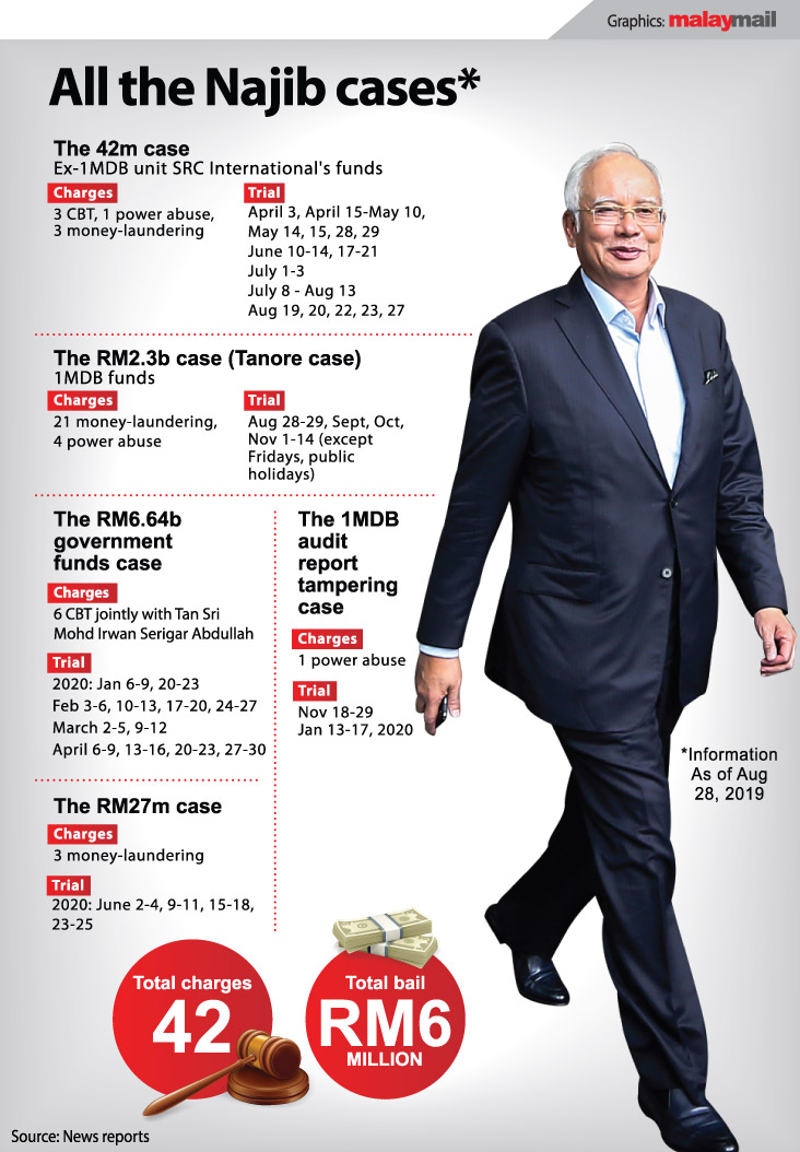