Datin Paduka Marina Mahathir is pictured at the Kuala Lumpur Courts Complex August 27, 2019. — Picture by Firdaus Latif
Follow us on Instagram, subscribe to our Telegram channel and browser alerts for the latest news you need to know.
By IDA LIM

Marina said the court’s ruling today had “enormous implications” for everyone, noting that the judge had today lifted the corporate veil on SIS in this case.

Marina pointed out that normally a company and its shareholders are treated as separate legal entities, and that this corporate veil is usually only lifted in “very limited cases” to enable the suing of shareholders of a company.

“Now he’s saying that you can, which means any companies that have Muslims in it can be acted upon by the Shariah law.

“This is backdoor Shariah-sation of our entire law, our entire Constitution, is what I understand it to be,” she told reporters here when met outside the courtroom.

“Before this, everybody wants to have Bumis (Bumiputera) on their board, right? Now it’s dangerous to have any of that on, because of this decision,” she said.

Marina, who is currently an ordinary member of SIS without positions in the organisation, said the court decision today would mean fatwas could be issued “against any company as long as it’s got Muslim directors”.

Marina said she also found it “extremely shocking” for the judge to have said that there was no need for the Selangor Islamic authorities to inform those who they want to impose the fatwa on and that there was no breach of natural justice.

“But how would you know that there is a law that you are supposed to contravene if you don’t know about it?

“How Islamic is that? How do I know? You mean that they can just come and arrest me for a law that I don’t even know existed? What sort of process is that? I’m sorry, it’s outrageous,” she said, noting that there would be no chance for one to defend oneself.

Earlier today, High Court judge Datuk Nordin Hassan dismissed SIS’ legal challenge solely by ruling that the civil courts had no jurisdiction to decide on the case, and that SIS should instead go to the Shariah courts to challenge the fatwa.

The judge had gone on to provide his views on other legal points, saying that the Selangor fatwa applies to SIS Forum (Malaysia) even if it was only a company.

Companies and their directors are usually considered separate legal entities, but the judge said justice in this case requires this corporate veil to be lifted.

While acknowledging the company SIS is an “artificial legal person”, the judge said its directing minds are Muslims and their activities touch on Islamic law which the fatwa is applicable on.

SIS’ lawyers had previously said the group which operates as the company SIS Forum (Malaysia) should not be subject to a 2014 Selangor fatwa that labelled it as deviant, arguing that the Selangor Islamic authorities only have powers over “persons professing the religion of Islam” and not companies.

When met outside the courtroom, SIS lawyer Surendra Ananth said SIS had previously argued that the civil courts has the powers to hear the case.

“On the merits, in essence our argument is because the fatwa directs the banning and seizure of books, it has to do with liberalism and pluralism, it does not define what these concepts mean.

“It’s impossible for a Muslim to know whether they are a liberal or plural person, therefore it’s vague and violates a number of rights. Again the court disagreed,” he said when explaining the court’s decision and SIS arguments.

The Selangor fatwa, which was gazetted on July 31, 2014, singled out SIS Forum (Malaysia) in a sweeping declaration that the organisation and any individuals, organisations or entities holding on to “liberalism” and “religious pluralism” are deviant from Islamic teachings.

The 2014 fatwa also declares that any published materials with elements of liberalism or religious pluralism are haram (forbidden to Muslims) and can be confiscated, and instructs the Malaysian Communications and Multimedia Commission (MCMC) to block social websites that go against Islamic teachings and Islamic law.

The fatwa or religious edict also declares that any individual holding on to liberalism and religious pluralism should repent and return to the path of Islam.

On October 31, 2014, SIS Forum (Malaysia), the group’s co-founder Zainah Anwar and Datuk Zaid Ibrahim had filed a judicial review application over the fatwa against the Selangor Fatwa Committee, the Selangor Islamic Religious Council (MAIS) and the Selangor state government.

In SIS’ legal challenge, it had asked the civil courts to declare the 2014 fatwa as being unconstitutional and being in breach of federal laws and a state law.

SIS had also applied for the civil courts to declare that SIS as a company or others not able to profess the religion of Islam should not be subject to the Selangor religious authorities’ jurisdiction, as the latter has powers only over “persons” professing the religion of Islam. 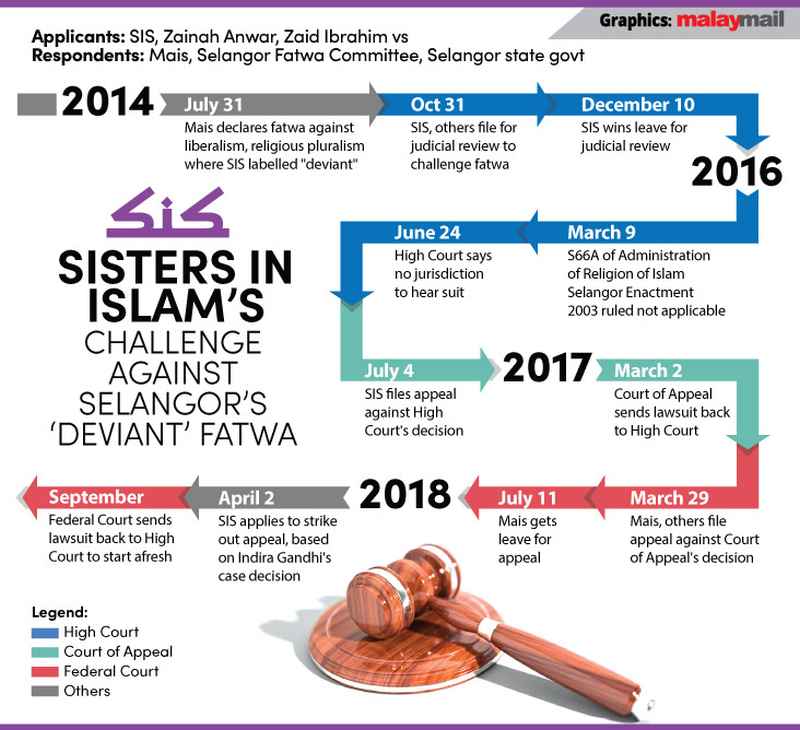