Zamri Mustapha (right) and Haireey Hashnan hold up their board game ‘Drama Pukul 7’ during an interview at WePlayGames Cafe in Cyberjaya August 8, 2019.— Picture by Yusof Mat Isa
Follow us on Instagram, subscribe to our Telegram channel and browser alerts for the latest news you need to know.
By ZURAIRI AR

CYBERJAYA, August 9 — Hitting their crowdfunding target of RM15,000 in roughly a week last night came as a surprise to the folks at Meja Belakang Art — after all, their independently-produced board game Drama Pukul 7 covers a very specific niche.

The mechanics of the card-based game may be familiar to most gamers, but perhaps not the subject matter.

The game’s title itself is a blatant referral to Malay soap operas shown on local TV channels at that exact hour each evening.

“The board game scene is small, and this is a very Malay niche. We weren’t sure how people would receive this because it’s in Malay, and based on a Malay niche,” art designer Haireey Hashnan, 28, told Malay Mail at an interview in WePlayGames board game cafe here.

“But on social media now, Malay soap operas have become quite the meme. It’s something that a lot of people make fun of. So when we immortalise that concept in a game, it inevitably becomes the talk of the town,” added game designer Zamri Mustapha, 30.

Malay soap operas regularly become the butt of jokes with the online community for their cliched plots and sometimes nonsensical writing.

One such drama had doctors slamming grossly inaccurate medical procedures, while another featured a character with a company “worth RM36 billion, with hundreds of thousands of staff.”

Despite that, these soap operas remain a favourite of the Malay community, with some making a point to watch them “live” online even when they are abroad, while jokes or quotes from some shows entering the Malay pop culture and vernacular. 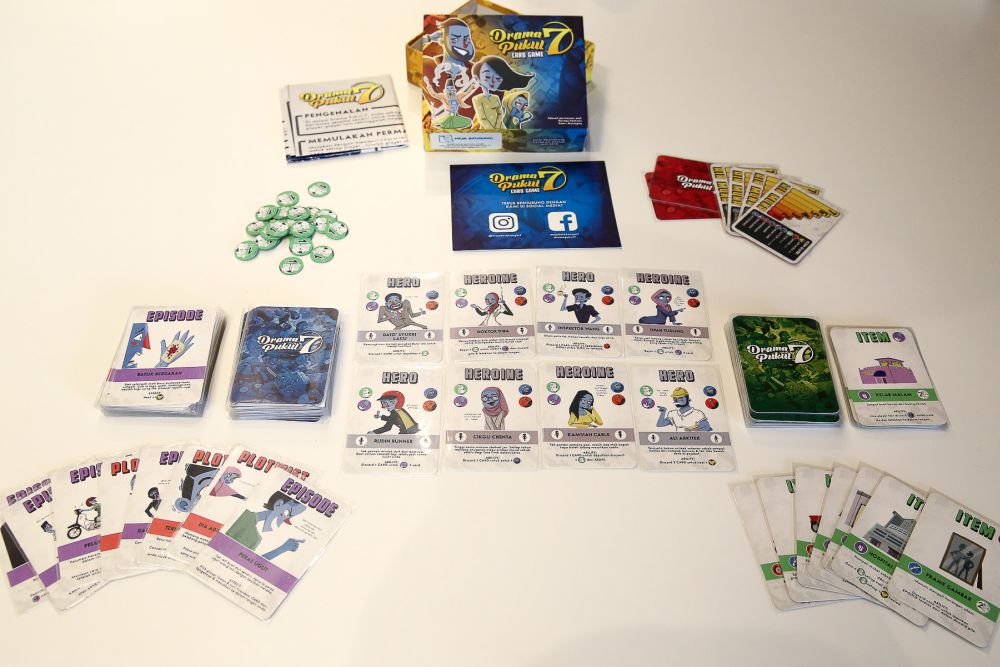 Drama Pukul 7’ allows a maximum of six players, with each player portraying a different character in a soap opera as they vie to become the sole star. — Picture by Yusof Mat Isa

The duo — who work in a popular local animation studio as a conceptual artist and character rigging artist, respectively — said they were inspired by humorous card games such as Munchkin, Fluxx and Dungeon Mayhem; but wanted something they can share with their work mates after clocking off work.

They found that a lot of their Malay friends were turned off by some of the more complex board games, and also the amount of English material involved in the in-game text.

“We want to invite others to play along, and they can start with this game as a gateway, an entry point,” said Haireey, who also plays bass for heavy metal band Penunggu.

Haireey also admitted that their inspiration include a mix of their parents’ fondness of such shows, and their own for competitive games where one can spite other players.

“What better theme to pedajal each other than soap operas?” he asked, using the Malay word for ‘spite’.

Drama Pukul 7 allows a maximum of six players, with each player portraying a different character in a soap opera as they vie to become the sole star!

In the game, players do so by trying to ruin other players’ air muka — a sociological concept in Malay that is sometimes called ‘face’, a mix of reputation, authority, and honour.

To achieve that, players use “episode” cards that advance the plot, and “item” cards that help with the attacks. The in-game currency comes in units of RM1 million, another reference to how ludicrous these TV shows can be.

There are also member (Malay slang for “friend”) cards that shield players. “There’s always that one best friend who’d back the protagonist,” said Haireey. In true Malay soap opera fashion, a character can marry that friend for added benefits, but only between members of the opposite sex.

But the defining cards of the game have to be the “plot twist” cards that can deliver devastating blows to other players out of nowhere, much like their stereotypical namesake in such shows.

“My favourite ‘item’ card is the minyak dagu,” said Haireey, referring to the sleazy love potions obtained from shamans.

The card can immediately steal another player’s husband or wife. “Everytime we do a test play, people will really laugh at it.”

Meanwhile, Zamri said he loves the religious and conservative typecast characters — Tipah Tudung and Awie Warak, who would allow a player to draw three cards at any time compared to the usual one.

“For now, most of our test players love the game. Even if the jokes are sometimes lost on the non-Malays, they also love the mechanics,” said Zamri, who said the team is also working on an app that would translate the Malay in-game text. 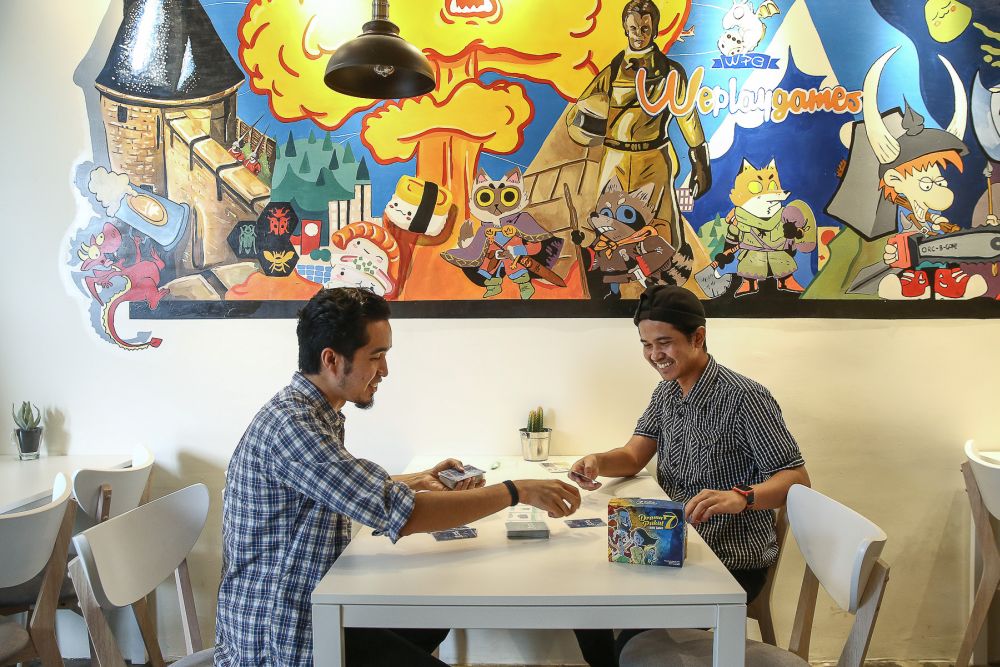 The duo said although they have hit their target, they will keep the crowdfund campaign open until the end of the month as an opportunity for backers to obtain a set cheaper than the retail price.

The more pledges they get, the more rewards they plan to produce for their backers. For now, those who pledge more than RM120 will receive seven additional unique game cards, among other rewards.

They have already started producing the initial run of 500 sets to deliver to the backers and for retail. You can pledge on local platform Mystartr here until August 30.