Tun Dr Mahathir Mohamad and Turkish President Recep Tayyip Erdogan during a joint press conference at the Presidential Complex in Ankara July 25, 2019. — Bernama pic
Follow us on Instagram, subscribe to our Telegram channel and browser alerts for the latest news you need to know.
By ZURAIRI AR

Speaking at a joint press conference with Turkish President Recep Tayyip Erdogan, the prime minister also lauded Turkey for being a rare case of a developed Muslim-majority country that may prove be an “antidote” valuable in the effort.

“What I propose, is for these countries to work together and strengthen the Muslim countries.

“So that we can speak louder as one voice. With our own capacities in terms of many areas,” Dr Mahathir told the press at the Presidential Complex here.

Erdogan, through his translators, concurred with Dr Mahathir.

Malay Mail asked both leaders if Malaysia and Turkey would offer their leadership to the Muslim world amid deafening silence on issues such as the apparent oppression against Muslim minorities and the Uighurs by Beijing.

Both Malaysia and Turkey were conspicuously absent from a joint letter by 22 countries to the United Nations High Commissioner for Human Rights earlier this month condemning China’s “mass arbitrary detentions and related violations” against the Uighurs — much like the rest of the Muslim world.

In his immediate response, Dr Mahathir said: “Making a statement is easy, but action is much harder.”

However, he did not mention China by name, nor touch on the persecution of Muslims there.

Earlier in his speech after receiving the Order of the Republic, becoming the first South-east Asian leader to do so, Dr Mahathir lamented that the global Muslim community is currently facing a lot of problems and is ostensibly weak.

“If you look at the past, Turkey was the saviour of the Muslim community in those days, but for reasons that few are able to understand we now have no Muslim country to stand up and protect us, but that doesn’t mean that this should be forever,” he said. 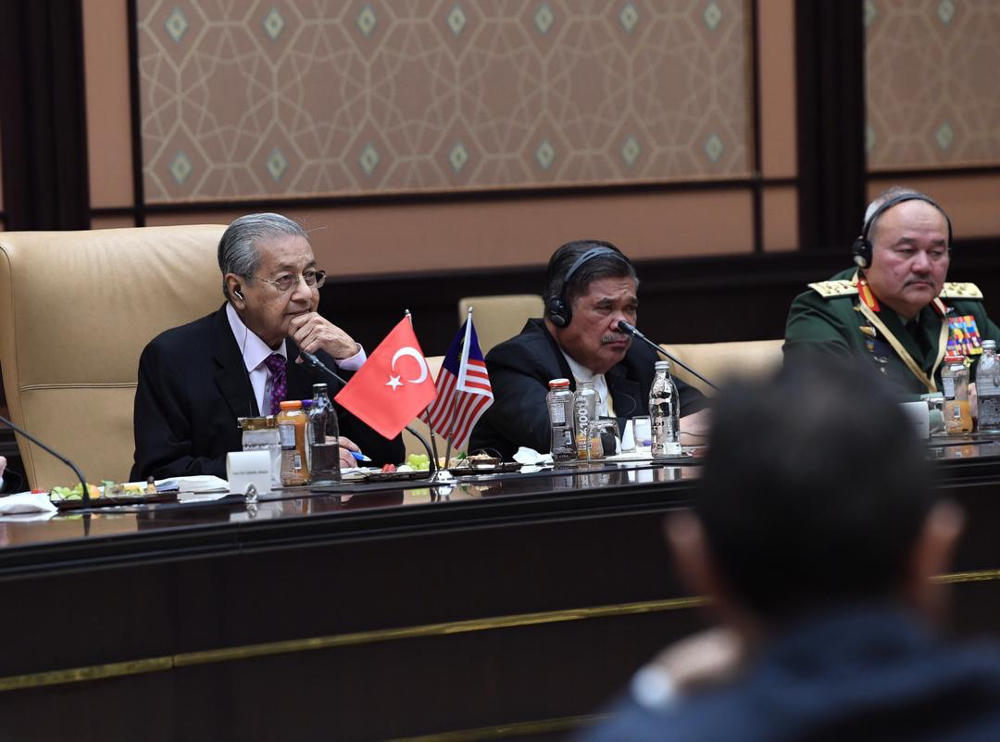 However, he said the tripartite pact may be able to utilise the collective minds and resources of its members to relieve the Muslim world of being subjugated, and figure out a way to stem the imminent decline and fall of the Muslim-majority nations.

In May, Malaysia, Turkey and Pakistan’s foreign ministers—Datuk Saifuddin Abdullah, Mevlut Cavusoglu and Shah Mehmood Qureshi — held a trilateral meeting at the sidelines of the Organisation of Islamic Cooperation (OIC) Council of Foreign Ministers in Jeddah.

Following the meeting, the three countries announced that it has reviewed the OIC reform agenda, and discussed ways to make the Islamic umbrella organisation more effective.

Dr Mahathir also told the press today that Malaysia and Turkey are on the same page regarding the plight of Palestinians.

“It is important to show the world that Malaysia and Turkey see things in the same way,” he said.