Segambut MP Hannah Yeoh (right) speaks during a press conference in Kuala Lumpur July 22, 2019. — Pictures by Ahmad Zamzahuri
Follow us on Instagram, subscribe to our Telegram channel and browser alerts for the latest news you need to know.
By AZRIL ANNUAR

KUALA LUMPUR, July 22 — The Taman Tun Dr Ismail Residents Association (TTDI-RA) and a group of longhouse residents living on Taman Rimba Kiara, led by their MP Hannah Yeoh, gave a huge thumbs down to developing one of the city’s last green lungs.

Yeoh, surrounded by representatives of the two residents groups, said they can only accept two outcomes for the prolonged Taman Rimba Kiara development saga: either develop only the longhouse area in the park that was meant only for temporary housing or revoke all development plans altogether.

“I have also obtained support from the other KL MPs, seven of them.

“They have given me a letter on our proposed resolution which is to revoke the development order given, and number two — if you want to continue to allow them to build, they must build in the current long house footprint — 4.4 acres and not go beyond the current footprint.

“The scale down version will never be accepted by me or the residents, even the longhouse residents. What they want is to retain their current livelihood there, no high rise... the longhouse resident has also presented it to the FT Minister and spoken about it at the town hall,” the Segambut MP told a news conference here today. 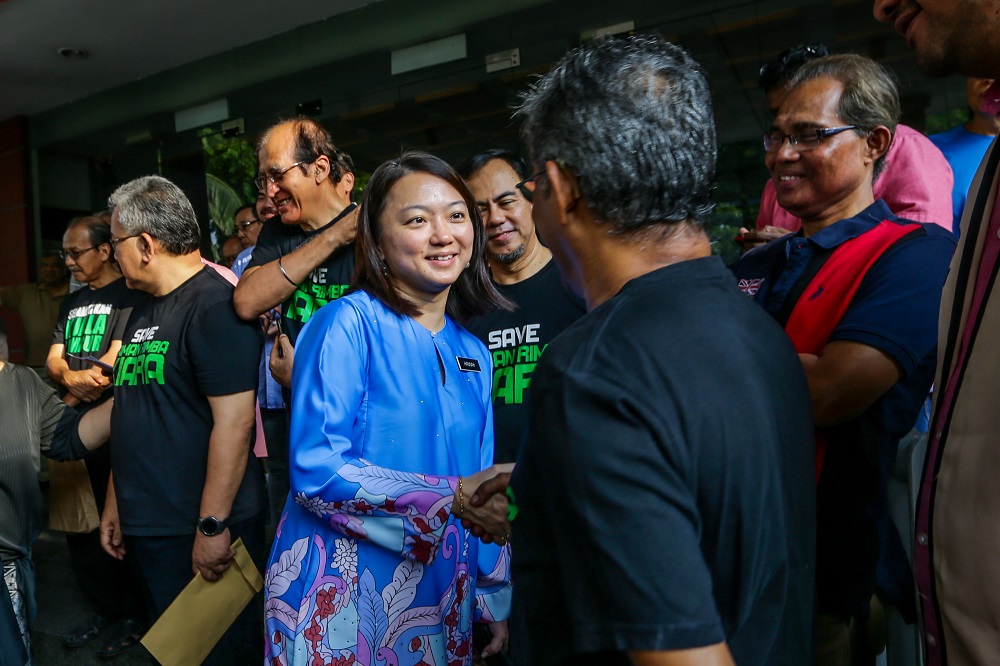 Yeoh said she had requested a meeting with newly appointed MACC chief Latheefa Koya to discuss the issue.

Yeoh and Khalid have been at loggerheads over the fate of the development, with Yeoh wanting the entire project scrapped while Khalid said he needs to save public funds as the scrapping of the project would probably cost Kuala Lumpur City Hall around RM150 million.

The deputy women, family and community development minister as well as anti-graft NGO Centre to Combat Corruption and Cronyism on the other hand asserted that revoking the project will only cost the government around RM115 million.

Khalid had promised to bring the matter up to a Cabinet meeting but Yeoh confirmed today that it has not been discussed yet.

At the press conference, Yeoh also said she had requested a meeting with newly appointed Malaysian Anti-Corruption Commission (MACC) chief Latheefa Koya to discuss the issue.

She said that Khalid’s predecessor, Datuk Seri Tengku Adnan Tengku Mansor had abused his power in granting the development of the Pavilion Taman Tun project.

Yeoh urged the MACC to look into all the reports lodged against the development.

“My hope is that MACC will look into all the reports that have been lodged, also the fresh report lodged by TTDI-RA last week. I hope that something like this, we have a say on this kind of governance. We don’t want this trend to continue.

“If MACC say there’s nothing wrong with something like that when there is a clear case of conflict of interest, then it will send the wrong message to all politicians in every GLC level that you can have the license to continue doing this,” she said.

The DAP lawmaker also said that if the MACC finds no wrong-doings in the project, then the laws in question which has loopholes for politicians to abuse their power must be changed.