PETALING JAYA, July 5 — The family of Singapore death row inmate P. Pannir Selvam are seeking to have his death sentence commuted to life imprisonment if nothing else works.

Lawyer for the family N. Surendran said they have already filed a judicial review to save the soon-to-be 32-year-old from execution.

“Right now we have to apply to the High Court in Singapore to cancel the decision of the Attorney General’s Chambers in not providing the certificate of substantive assistance, and thereby ordering the AG to give it,” he told a press conference here with Pannir’s family at the headquarters of his group, Lawyers for Liberty.

A certificate of substantive assistance is a document which proves the individual co-operated with the state and provided evidence to stop drug trafficking activities.

“Only with this will the High Court have the power to commute Pannir’s sentence to life imprisonment.

“We are also going to apply for the quashing of the Singaporean Cabinet’s advice to the President in not granting clemency to him,” said Surendran, who is also co-founder of the legal group.

Pannir was granted a stay on May 23, one day before his sentence was meant to be carried out, while his family was informed only several days ago that the hearing would take place on July 19.

Surendran noted there were considerable flaws in the process of Pannir’s case.

“For example, both letters from the president and the prison authorities saying his clemency application has been rejected are dated to May 17.

“This indicated a serious flaw because surely the prison would not know the clemency has been rejected when the letter from the President’s Office has not been issued out yet,” he said.

Surendran also criticised the Singapore attorney general for not giving a reason why the certificate was not granted to Pannir.

“We are very clear, and the facts are clear from Pannir’s assistance, he was duped by certain Malaysian-based kingpins at the time. We have the names, details, and all information which has been given to the Singaporean authorities.

“Hence why we are very surprised from the very beginning that the Singaporean AGC did not issue the certificate, as it would have made the difference between life and death for Pannir,” he said.

Surendran also said that there is widespread support for Pannir’s case in Malaysia, including the Cabinet.

“Though the public recognises the dangers of drug trafficking, it also recognises that executing drug mules will not achieve anything.

“His family has worked very hard to save him, and the Malaysian government via the Law and Foreign Affairs Ministers has taken the stance that Pannir should not be executed, as should any drug mule currently being imprisoned in Changi,” he said.

Pannir’s relatives present at the press conference today donned white T-shirts with a print of a pair of hands joined in prayer and the word “Give Pannir Second Life. #SavePannir”.

His younger brother P. Joshua, 30, asked the public to support the family’s effort to save his older sibling’s life.

“We grew up together in a very disciplined family, and Pannir has always been a kind-hearted soul. Always active in school, participated in a lot of sports and church activities.

“We are asking the Singaporean government to consider sparing his life. He was tricked into doing this,” he said.

Pannir’s younger sister, P. Angelia, 25, was in tears as she spoke of her older brother, whom she said had been taken advantage of.

“He is always willing to lend his hand to those in need. People have taken advantage of his kind heart.

“This is his first offence. Throughout the five years since he was arrested we have had a difficult time. We had to sell some of our properties to finance our travels back and forth to visit him,” she said.

Angelia added that one of her brothers even had to defer his post-graduate studies to save Pannir from the hangman’s noose.

“We would like to ask those who support my brother to sign the petition at savepannir.info, which will go to helping him out,” she said.

Pannir, formerly a security guard from Ipoh was found guilty by the High Court in Singapore on June 27, 2017 of trafficking in 51.84g of diamorphine at the Woodlands checkpoint on September 3, 2014.

*A previous version of this story contained errors which have since been corrected. 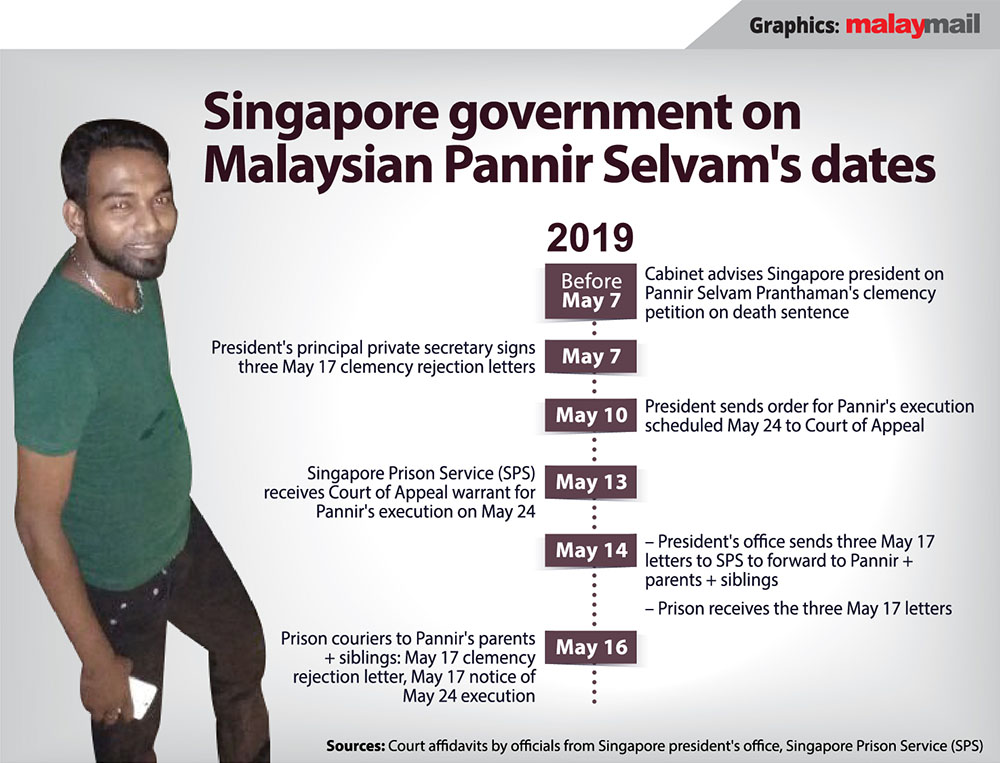