Where were you when Tabung Haji plundered? Muhyiddin asks self-proclaimed Islamic defenders

Home Minister Tan Sri Muhyiddin Yassin speaks during a media interview in Putrajaya May 2, 2019. — Picture by Mukhriz Hazim
Follow us on Instagram, subscribe to our Telegram channel and browser alerts for the latest news you need to know.
By By Thasha Jayamanogaran

KUALA LUMPUR, May 3 — Home Minister Tan Sri Muhyiddin Yassin has one question for Gerakan Pembela Ummah (Ummah) ahead of its planned rally in the national capital tomorrow, organised purportedly with the aim of “defending Islam”.

The veteran lawmaker believes the group has vested political interests and is out to tarnish the image of the Pakatan Harapan (PH) government by painting it as uninterested in protecting the welfare of Muslims who form the bulk of the country’s multireligious population.

“They are doing all this on the expense of religion to get more followers and support.

“But in reality if they were really interested in defending Islam, where were they when Tabung Haji issue cropped up?

“Where were they when our country’s debt was revealed?... If they meant well for Islam, what did they do?” he posed during a press conference after the handover ceremony of outgoing Inspector-General of Police Tan Sri Mohamad Fuzi Harun to his successor Datuk Seri Abdul Hamid Bador at the Police Training Centre here this morning.

Muhyiddin was referring to the financial scandals surrounding the Muslim pilgrimage fund unearthed after PH took over the federal government.

The Pagoh MP noted the other financial scandals involving public institutions that were established to improve the livelihood of Malays and Muslims in the country, naming plantations giant Felda as another example.

“Just like Felda... which a big part of it involved Muslims. In the end it was us, Pakatan Harapan who took responsibility to figure out big debts such as RM17 billion,” he said.

Muhyiddin dismissed tomorrow’s rally as a publicity stunt, and advised the organisers not to misuse religion to sow public discord. 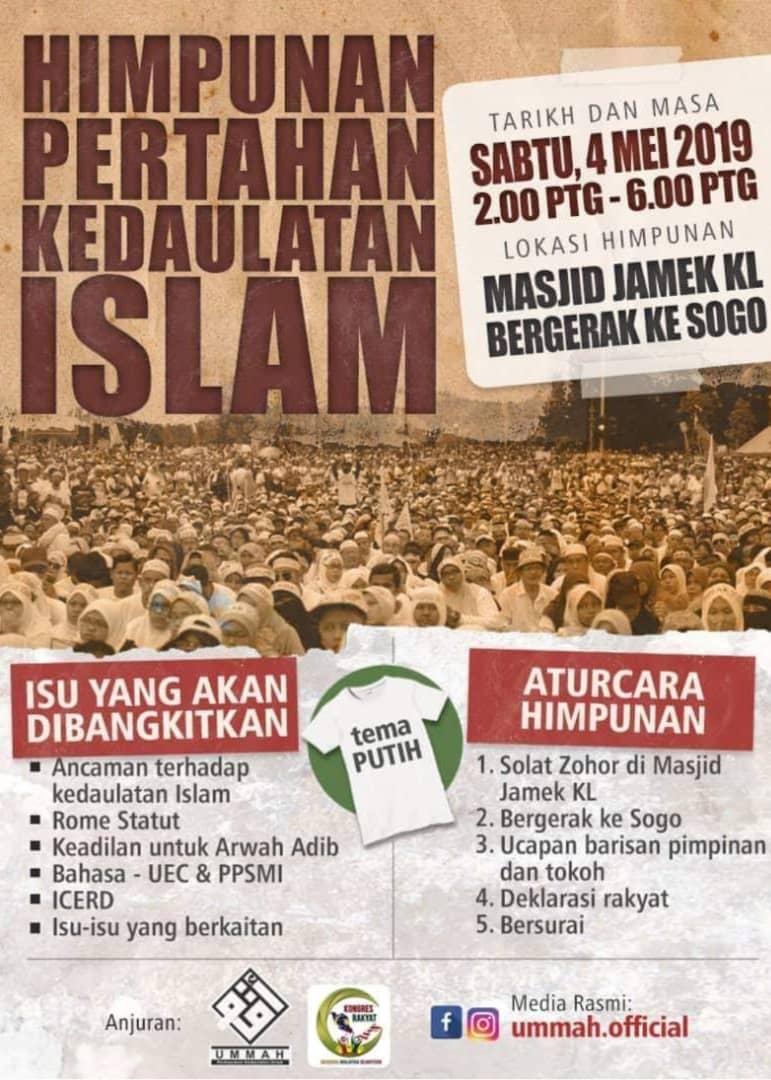 “All I can say is don’t evoke Islam sentiments or make us look like we are not protecting Islam.

“There is no evidence till now to show Islam has been neglected or any of Islam’s institution was meddled with or demolished by PH,” he said.

He stressed that the PH administration will always uphold the status of Islam as stated in the Federal Constitution.

“Who here feels Islam is threatened? Raise your hands,” he said, addressing the audience of police officers and journalists present.

Last year, Islamic Affairs Minister Mujahid Yusof Rawa disclosed a deficit of RM4 billion in Tabung Haji even as the Muslim pilgrimage fund continued to pay out dividends to its millions of depositors.

The PH government said the deficit occurred before their administration post GE14.

Among the controversial transactions involving Tabung Haji was in 2015 when it paid what many considered above market rates for a 0.63-hectare plot of land owned by scandal-hit state fund 1Malaysia Development Berhad).

Othman, who lodged the report on behalf of Felda, claimed the purchase was made on the orders of Datuk Seri Najib Abdul Razak when he was prime minister and finance minister.