This is how else the RM24b bailouts for Felda, Tabung Haji could have been used and abused 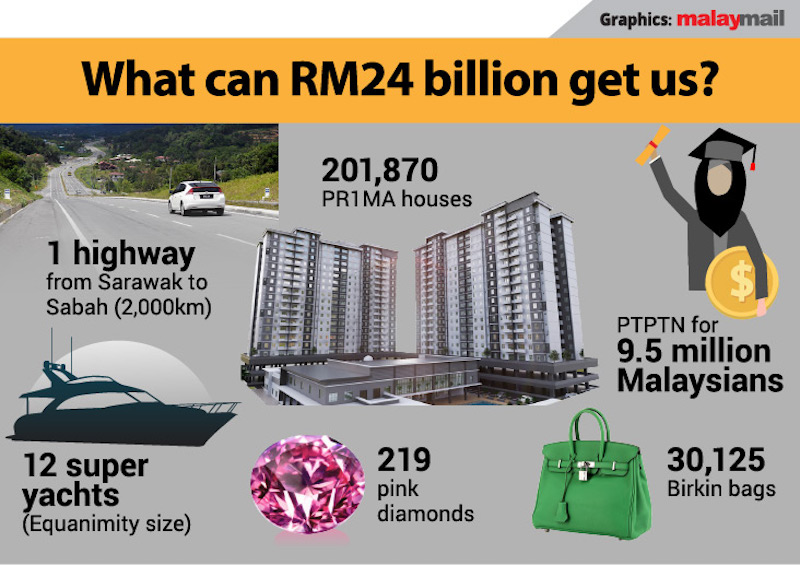 In effect, they are bailouts for problems created and entrenched during the previous administration.

The RM24 billion to resuscitate the smallholder farming agency and Muslim pilgrimage fund after years of alleged financial mismanagement and fraud is huge, to say the least.

For perspective, it is the equivalent of nearly 8 per cent of the whole federal Budget for 2019 and could have been used to pay for the RM16.7 billion LRT3 line in its entirety plus change.

Malay Mail calculated what else Malaysia might have had with an extra RM24.1 billion. Tears are optional but recommended.

The Malaysian section of the highway stretching 2,083 km across Sarawak and Sabah, with links to Brunei and Indonesia, is projected to cost RM16 billion.

Putrajaya would easily have funded this in its entirety without resorting to private delivery partners if it had a spare RM24 billion around.

Using the lowest price, the money used for the bailout would have been enough to put 201,870 families in such homes.

Assuming four people to a household, that would mean free housing for 807,480 Malaysians.

According to the National Higher Education Fund Corporation (PTPTN), the student loans it issued ranged between RM17,759 and RM32,722 in 2017.

Averaging this to RM25,240, the bailout sum could have paid for 9.5 million Malaysians to take a university course locally.

Putrajaya currently provides direct cash payments to qualified recipients under its Bantuan Sara Hidup scheme of up to RM1,000 per household.

Had the bailout money been diverted to this aid programme, Putrajaya could afford to make 24 million such payments or effectively one to every household in Malaysia and more, instead of limiting the payment to just those earning under RM2,000.

To emphasise the profligacy of the financial mismanagement that led to the two bodies requiring such massive bailouts, Malay Mail also extrapolated how the RM24 billion could have been misused.

It eventually offloaded this for US$126 million to Genting, or just over half the price when new.

With RM24 billion, however, dubious government leaders and their associates could have ordered two dozen of these 100-m long luxury yachts for their personal use, which they could then call the Integrity, Honesty, Frugality, Humility, and a whole host of other ironic names.

Legendary actress and singer Marilyn Monroe sang about its virtues in her song Diamonds are a Girl's Best Friend. A James Bond movie starring Sean Connery was titled Diamonds Are Forever.

In Malaysia, one particular gem has caught public attention for years: a lustrous pink diamond valued at US$27 million (RM110 million).

With RM24 billion to spare, Malaysia could have been home to 219 such sparking examples, complete with verified proof of purchase to avoid the unnecessary stress and headaches of baseless accusations.

Most consider handbags to be disposable fashion accessories but in stratified circles, they cost so much that they are considered “investments”.

They cost a lot, but they can be worth even more in time.

According to a 2016 report by international magazine Time, Hermès Birkin handbags, handmade and sold only in limited numbers between US$60,000 and US$200,000, are a better investment than gold.

Using the higher end, the RM24 billion could provide at least 30,125 socialites here with one specimen each.

Or 30,125 to just one particularly avid collector.