An actress is seen here evoking the character of a landlady in Kwai Chai Hong, where you can come to be transported back in time. — Pictures by Mukhriz Hazim
Follow us on Instagram, subscribe to our Telegram channel and browser alerts for the latest news you need to know.
By By Ida Lim

KUALA LUMPUR, April 12 — Kwai Chai Hong is currently the best-kept secret — but perhaps not for long — of the Chinatown area in Kuala Lumpur, with the lovingly-restored pre-war buildings in the history-rich lane set to be the latest tourist hotspot.

Chinatown is virtually synonymous with Petaling Street or Jalan Petaling, which stretches beyond the mega arches of Chinatown. 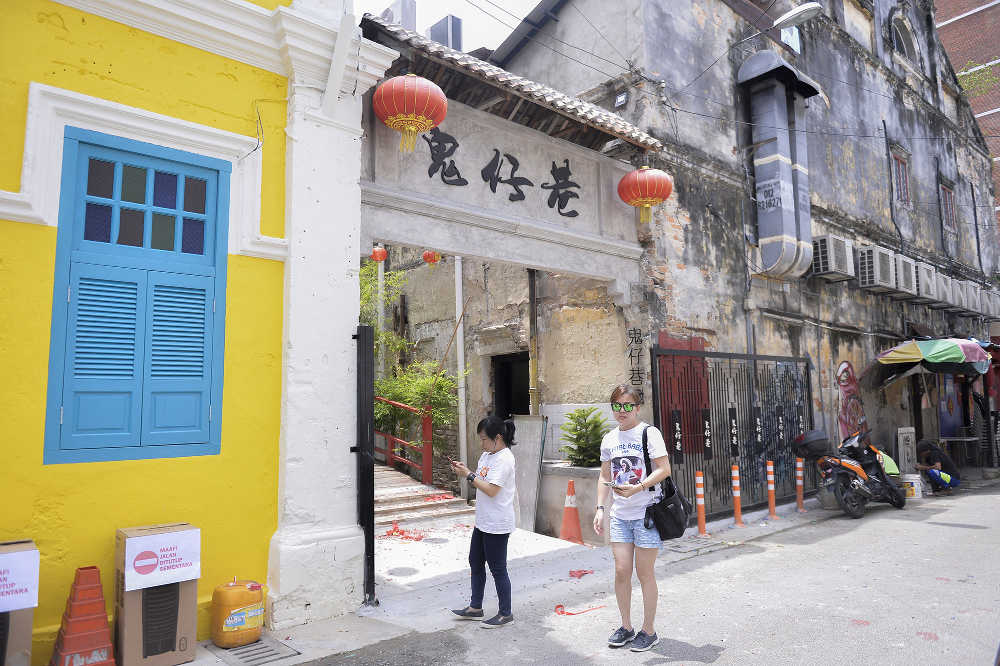 Psst... think you can find this hidden entrance to Kwai Chai Hong? It’s fairly near the Pasar Seni MRT and LRT stations, or the Maharajalela monorail station.

What is Kwai Chai Hong?

Lorong Panggung is alternately known as Kwai Chai Hong in the Cantonese dialect and translates quite literally as "Ghost Lane" or "Little Demon Alley."

The origin of the Kwai Chai Hong moniker is, however, not supernatural in nature, with at least two credible theories floated regarding this name.

One is that migrant workers from China who settled here used the colloquial slang of "kwai chai" (ghost children or little demon) to refer to mischievous children running around Lorong Panggung.

Another theory is that Kwai Chai Hong's past as an area filled with gamblers, drug addicts, drunkards and those engaging in vice activities led to its nickname, while another story claimed that Lorong Panggung was the hideout of the "Dragon Tiger Clan" whose boss would call his members "Little Ghosts." 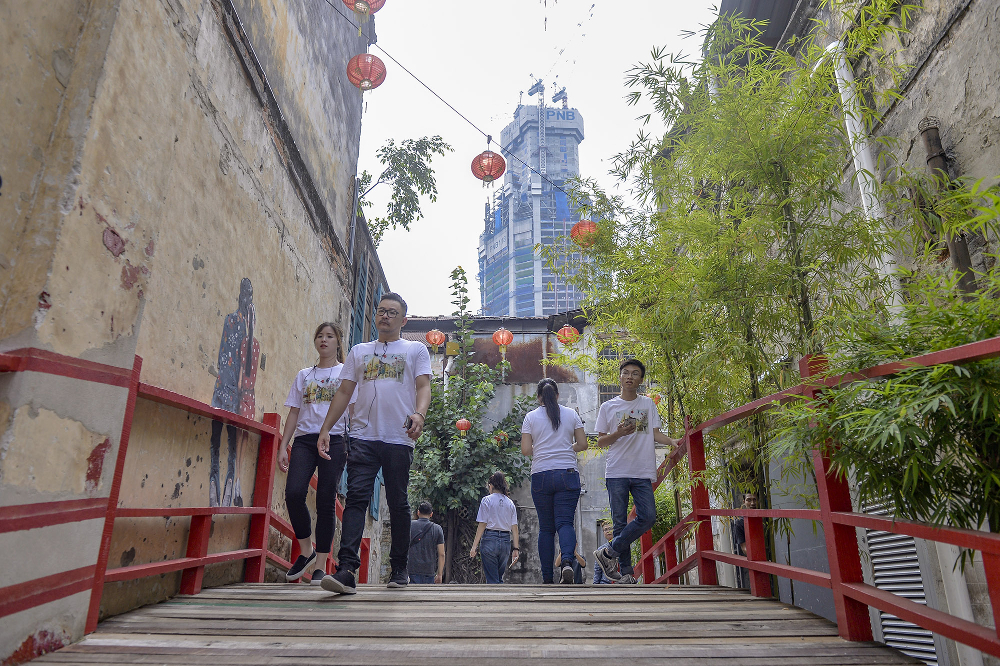 Fancy stepping back into time? Watch out for a mural as you cross the red bridge.

A trip back in time

Zeen Chang, managing partner of space management company Bai Chuan Management Sdn Bhd which is behind the Kwai Chai Hong project, pointed out the thoughtful touches given to the laneway during its launch yesterday.

Visitors to Kwai Chai Hong are greeted by an arch that sports the Mandarin characters of "Kwai Chai Hong" written by a well-known Chinese calligrapher, while a wheelchair-friendly red bridge leads into the hidden laneway; it is made of reclaimed wood salvaged from the shoplots during restoration work.

The spot where the arch and bridge stands was previously occupied by Ho Kow Hainan Kopitiam, a coffeeshop established in 1956; it moved out last May and later relocated to a nearby shoplot just down the street. 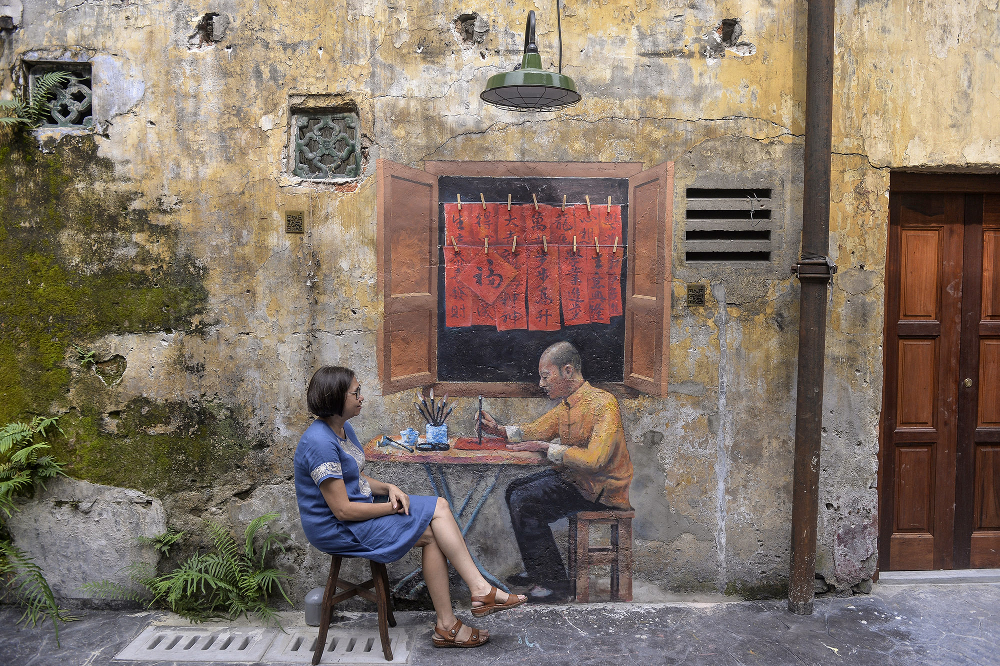 Chinese settlers in the old days would seek out the services of a calligrapher who had the necessary education required to write letters to their families.

Inside the laneway are six murals depicting the daily activities of early Chinese settlers in the area during the 1960s.

One of the murals which might be slightly controversial is a nod to the past when there were vice activities in Kwai Chai Hong, but Chang said there was no need to be ashamed of history.

The rejuvenated space in Kwai Chai Hong feels like a love letter to this part of downtown Kuala Lumpur, with one of its murals even sporting depictions of the historically-significant Yan Keng Benevolent Dramatic Association building and Chin Woo Stadium in the neighbourhood if you look closely enough.

Those who remember the bygone era where barbers carried out their business in the open air, or who remember enterprising businesses using baskets and pulleys to bring goods from the first floor down to customers, or even wooden blinds featuring painted-on advertisements may spot such details in the murals. 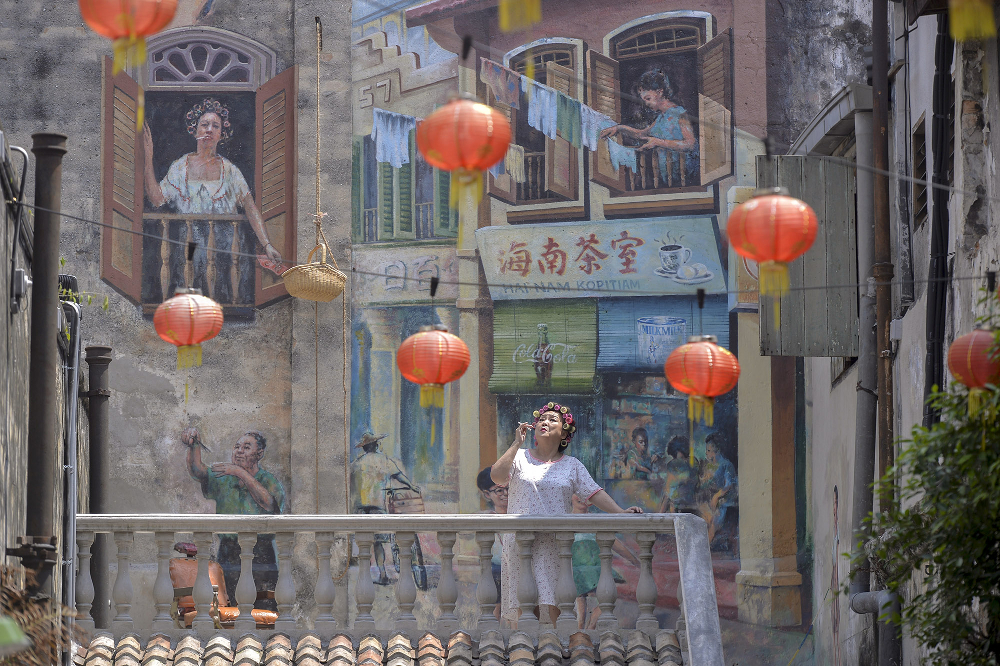 Come nearer for a closer look of all the details in this mural.

Kwai Chai Hong also features a century-old lamp post believed to be the only one surviving from the first set of lampposts installed in Kuala Lumpur when electricity arrived in the early 1900s, as well as displays of the original wooden windows that are no longer fit for use.

While taking great pains to retain bits and pieces of history, the project also incorporated modern technology where visitors can use their smartphones to scan the QR codes on the walls for an interactive and immersive experience.

Wanting to bring out the full flavour of the stories that each character in the murals has to tell, Chang said professional voice artists who had recorded drama shows for radio were hired to do the voice clips for each mural.

Chang said she hopes visitors will find the Instagram-friendly Kwai Chai Hong a fun place to visit; different generations can appreciate the place together. 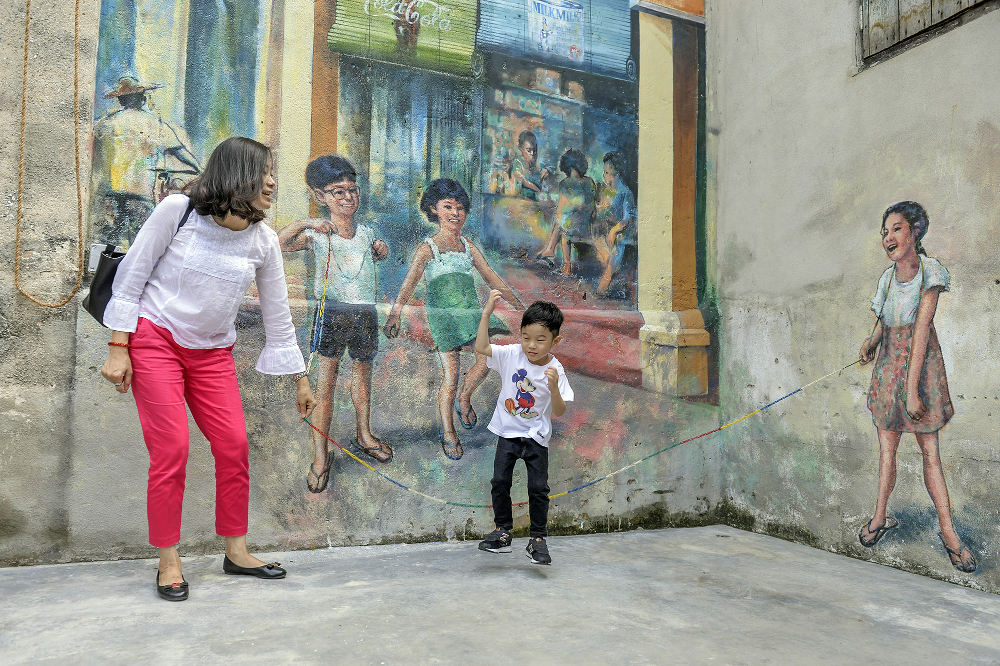 Bai Chuan Management’s Zeen Chang hopes that both the young and the old can enjoy Kwai Chai Hong. Seen here are two visitors.

Chang explained how she and the four other Bai Chuan Management founders — Ho Yong Wee, Coco Lew, Javier Chor, Terrence Liew — initially saw this part of Chinatown as a business opportunity and wanted to tap into the growing local interest over the past few years into arts, culture and heritage.

She noted that the project started off as a side business when they acquired a 12-year master lease for the 10 shoplots — until 2030 — noting the good rental rates and boom in hip new restaurants in the neighbourhood, but said it eventually evolved into something bigger.

"You become a family and you want to do something about it, you don't want to just make money. So from a side business project, it became a passion project, because we spent a lot of time, effort and investment making sure this becomes meaningful to people," she told reporters at the launch. 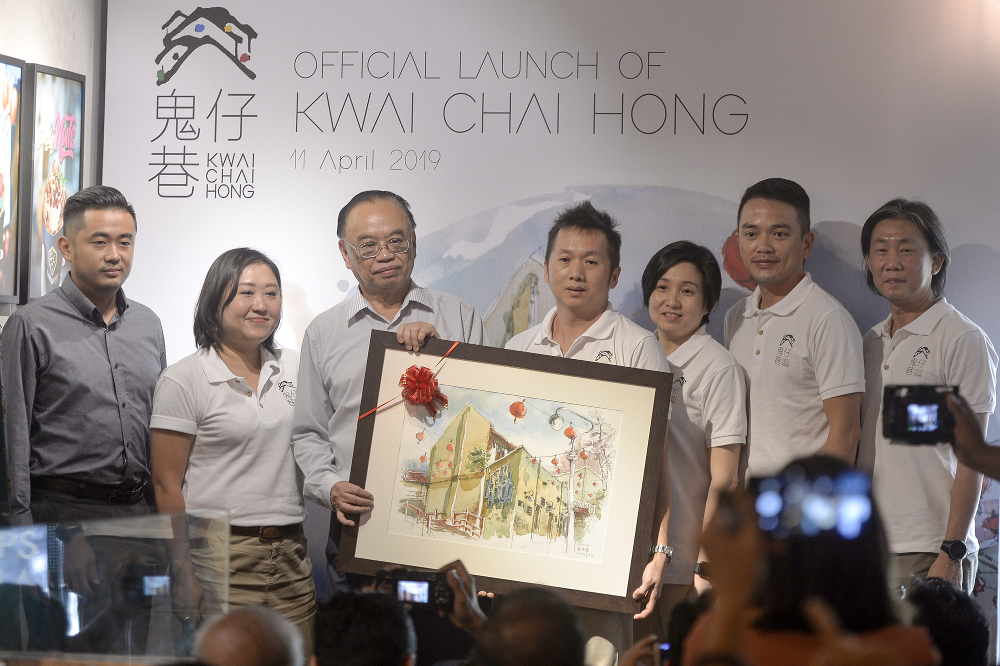 When met later, Chang said Lew recalled her childhood trips from outside Kuala Lumpur to Petaling Street, where her grandmother would bring her along while buying stock for trading purposes.

"She had the best recollection of all the things here as a child, she loved all the warm people but when she grew up and no longer frequented the place as much, she asked why is this place not as warm as before," she told Malay Mail, adding that Lew then decided to set up shop here about 15 years ago.

"When this project came about, she couldn't believe it, ‘first I could build a business in an area which meant so much to me as a child’, but beyond that she could make it better. She said if I could take part in making this place better, that's like a dream come true," Chang said.

Chang herself recalls trips to the Petaling Street area as a child, and said she hoped that the younger generation would also find Kwai Chai Hong something to look forward to. 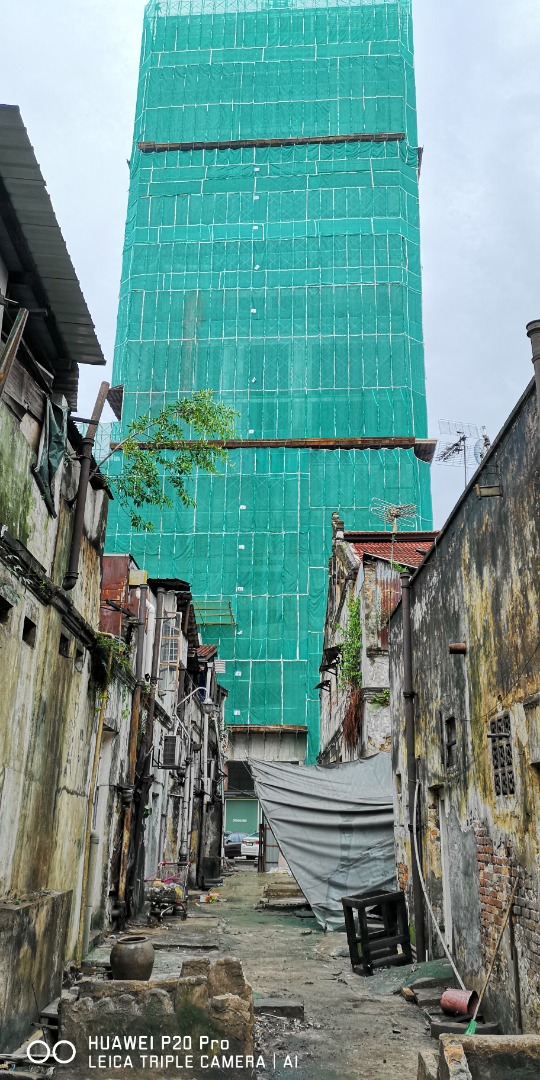 A view of the dilapidated state of Kwai Chai Hong as seen around September and October 2018. — Picture courtesy of Bai Chuan Management

The Kwai Chai Hong project is truly a labour of love, with Bai Chuan Management pouring in RM1.5 million of its own funds so far since it took over the place about eight months ago.

Of the RM1.5 million, RM200,000 alone was spent on cleaning up the trash in the previously dilapidated area, while RM120,000 was spent on the murals within Kwai Chai Hong as well as an additional mural at a shophouse along Jalan Petaling.

Chang said urban regeneration organisation ThinkCity provided a grant of RM94,255 for restoration, and support and guidance as well as access to experts on restoration works since the early days of the project.

"ThinkCity was the one giving advice on restoration, how to do certain things, what kind of material to use to patch up works, the shape of the windows," she said, as Bai Chuan Management founders were either those in the advertising or trading industry and needed such advice.

Bukit Bintang MP Fong Kui Lun, who was present at the launch of Kwai Chai Hong, had in a statement commended Bai Chuan Management's initiative in restoring the old shophouses which he said would boost the local economy and attract tourists. 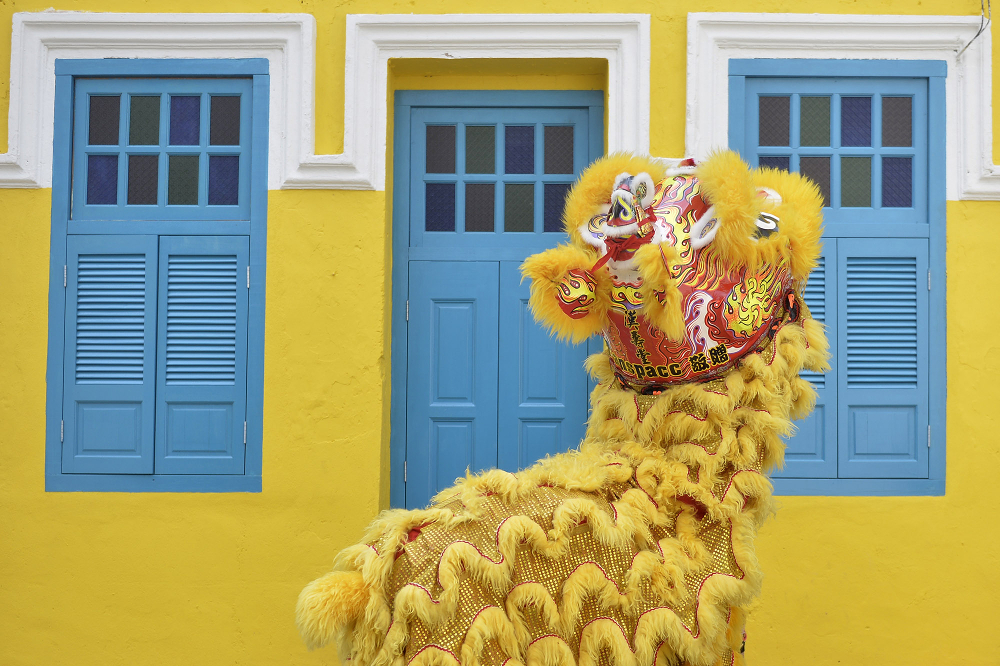 A lion dance along Lorong Panggung outside a restored shophouse painted in yellow and blue, which Chong Keat Aun had criticised on Facebook.

Former radio DJ Chong Keat Aun, however, criticised the project, questioning aspects of it such as the yellow-blue colour scheme for the shophouses fronting Lorong Panggung which he described as European-style in nature, the building of the arch and the red bridge, as well as the murals.

But Chang noted that the colour scheme was based on the existing blue-coloured windows of the shoplots, and that the yellow colour was chosen for the wall as it was the colour of the first layer of paint underneath the plaster on the bricks.

Chang said the arch and the red bridge was the team's interpretation to bring visitors back in time, noting that the bridge served the functional approach of allowing Kwai Chai Hong to co-exist with other businesses whose back doors opened into the laneway.

"If there was no bridge, you will be walking into people's backdoors, where they will be washing the dishes, cooking... to be fair, you don't tell people ‘can you close your backdoor because I want to use the laneway’, we don't do that, we work together... so you are now walking past people's backdoor without feeling you are not welcome," she said. A view of the original wooden window shutters on display and what is believed to be one of the oldest lamppost in Kuala Lumpur.

As for the heritage three-layer doors featuring a door with metal crossbars that was claimed to be "missing", Chang explained that the wooden layers of the doors were already rotten while the metal sections were all falling apart.

Only one sample of the metal "door" — which looks like a ladder — was in one piece and is now displayed in a cafe in one of the 10 shoplots.

The team salvaged and restored whatever they could amid challenges such as the shoplots being nailed up with plywood and with all the original doors and windows rotted away.

They also maintained the entire structure and facade of the shoplots which are designated as Category 3 heritage buildings where the facade cannot be altered.

Disheartened by Chong’s comments after pouring so much effort into Kwai Chai Hong, Chang said the team is ever willing to listen to feedback and learn from others on what it could do better.

Half of the 10 shoplots in Kwai Chai Hong have already been taken up, and the company is carefully selecting other tenants that can contribute to the essence of the area.

Chang envisions Kwai Chai Hong to be an event venue, and said eateries would be a good choice as tenants as they would allow people to linger in the area.

Kwai Chai Hong is open to the public for free from 9am to 6pm daily.