Minister in the Prime Minister's Department Datuk Seri Mujahid Yusof Rawa today reaffirmed that the government does not accept the lesbian, gay, bisexual and transgender (LGBT) community’s practices here, following a march where the community’s rights were one of the issues featured. ― Picture by Mukhriz Hazim
Follow us on Instagram, subscribe to our Telegram channel and browser alerts for the latest news you need to know.
By By Ida Lim

KUALA LUMPUR, March 9 — A minister today reaffirmed that the government does not accept the lesbian, gay, bisexual and transgender (LGBT) community’s practices here, following a march where the community’s rights were one of the issues featured.

Datuk Seri Mujahid Yusof Rawa, the minister in the Prime Minister’s Department in charge of religion, was commenting on the march today by civil society organisations in Kuala Lumpur in conjunction with International Women’s Day.

“I am very shocked with the actions of certain quarters today that misused democratic space to defend things that are wrong in the religion of Islam,” he said in a brief statement posted on his official Facebook account, without directly pinpointing what he was referring to.

Mujahid then went on to speak about LGBT practices.

“As I have said before this, the government is very firm that LGBT practices will not be accepted at all in this country. How is it possible that we recognise an act that is wrong in law?

“In relation to this morning’s gathering, I leave it to the Home Ministry that has the legal powers to act and take firm action,” he said.

In his Facebook post, Mujahid included a link to a news report by local daily Berita Harian, which quoted Dang Wangi district police chief Asst Comm Shaharuddin Abdullah as saying that no permit was issued for the march as the organisers gave less than 10 days’ of advance notice.

Shaharuddin was reported saying that the police will investigate the organisers under Section 9 of the Peaceful Assembly Act 2012.

Following the repeal of Section 27 of the Police Act and the introduction of the Peaceful Assembly Act, organisers of peaceful assemblies no longer need to obtain a police permit, but have to give advance notice of 10 days of the gathering to the police. 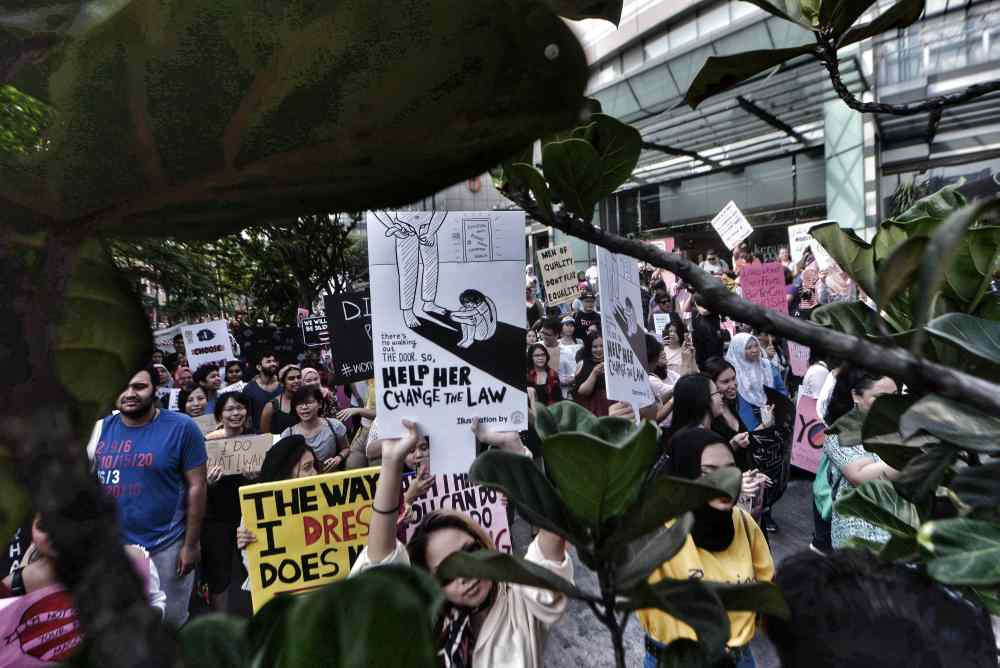 Demonstrators take part in a march in conjunction with International Women's Day in Kuala Lumpur March 9, 2018. ― Picture by Shafwan Zaidon

Hundreds reportedly showed up for the almost one kilometre-long march today from the Sogo shopping mall to the historic Sultan Abdul Samad building.

The march, which was aimed at pushing for the protection of the rights of women and minorities, went beyond the championing of issues such as the defence of the LGBT community’s rights.

The five official demands of the march are for the end of violence based on gender and sexual orientation; end of child marriages; the protection of the rights and freedom of women to make choices over their own body and lives; a minimum wage of RM1,800; and the destruction of patriarchy.