For some at this 122-year old organisation, it is the end of an era.

For others, it is the dawn of a new beginning and exciting journey into the uncharted unknown.

In the eyes of Malay Mail’s owner Datuk Siew Ka Wei, this is not the end for the company he purchased nine years ago but instead, like the legendary phoenix, it is a time where Malay Mail can rise from its ashes and become far stronger than it was before.

“The print plant can be used to print other publications and so forth. But the Malay Mail brand goes forward and it will grow even stronger. I think our online news has been very different and led the way in many stories and with the team we have today, we have created a name in the market.

“Many people tell me that they read only Malay Mail online. If you think about it, we never really pushed the brand, despite the fact that the sister company Redberry controls a lot of media assets.

“Now as part of regional media play there’s a lot we can do. I’ve read it in Europe, Japan, online is everywhere, there are no borders,” said Siew at the paper’s final print run party which was attended by more than 50 people.

Siew admitted that when he purchased the news organisation he knew that globally print publication was in the sunset stage.

However, the business magnate was looking at the entire Malaysian media landscape and saw an opportunity to snap a very attractive brand at a great price.

Believing that news will evolve in the age of smart devices, Siew took the risk and invested in an entity that could reach the mass market easily.

He believed that in the Industrial Revolution 4.0, the way forward for news organisations is to go online.

“I am not saying that print is dead but the future isn’t as rosy as you think,” confessed Siew.

“It’s sad, because the front page of Malay Mail has always carried some very interesting headlines, pictures. If you remember all the news it has had over the years, very long history... 122 years.”

For Siew, his favourite section has always been the paper’s front page as it broke multiple exclusives and breaking news despite being in low circulation during his time helming the organisation.

“Some loved it, some hated it. And that’s what a good newspaper is. You don’t create the news, you break the news. For this I must thank the team, both when we first got it till now, everyone contributed in their own way to the Malay Mail brand today,” he said.

His fondest memories prior to the final published edition was when Malay Mail published one million copies for readers nationwide.

This is, of course, besides the fact that the once afternoon paper always had the latest news when it comes to sports.

The 56-year-old veteran journalist who started his career as a cub reporter on November 4, 1984, admitted he was addicted to the sports section of the then afternoon paper.

“I grew up in Seremban where information was not so readily available in the afternoon, unlike today with the internet. For the results of the English Premier League or the First Division, the only way to get it was Malay Mail,” Wong said candidly.

In the eyes of the seasoned journalist, the nation’s oldest surviving news organisation is still a trailblazer and a pioneer — forging new paths for others to follow.

Wong found similarities between the beloved tagline of the show, Star Trek, and the newspaper where he works, “To boldly go where no man has gone before.”

“It will be very exciting for everyone, me included. We have no examples to turn to in the world but I would like to inform everyone that this is only the first in many steps that Malay Mail as a corporation will enter into in the digital business. We will not stop at news content.

“We will form alliances, acquire others to make us a truly digital company. And not just a digital content company, it will set the trend and become a pioneer,” said Wong.

He also pointed out that unlike others who began as a digital outfit first before trying to dip their toes into the print industry, the 122 years old news organisation is breaking trends as Malaysia’s first print and oldest newspaper to fully break away from a sunset sector and going fully into the digital world.

Wong remains confident that moving forward Malay Mail will only grow from strength to strength as it acquires more digital platforms to enhance its product viability.

“We’ll do everything from e-commerce to e-events to gaming, we are looking at the entire sphere of the digital business,” he said.

He observed that today’s youths prefer to receive their news not by newspapers but through their smartphones, laptops, desktops and various other devices and gadgets.

Lau, who is another veteran journalist who has served in and out of the country, pointed out that the world is changing and Malay Mail will only be damaged even further if it refuses to evolve.

“It is about evolving with the times and although it is sad for a lot of us who started our journalism careers during the newspaper era, this isn’t the end. We will continue for many more years to come,” said Lau.

However, there are those in the organisation who are very sentimental about the print format of Malay Mail. 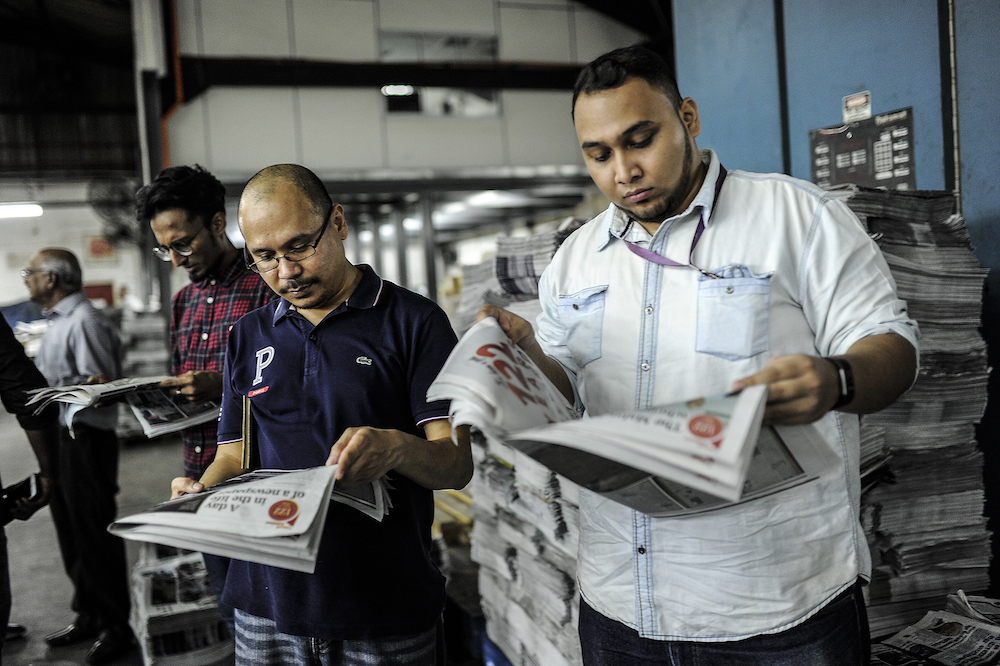 Among them is production editor RJ Devan, a veteran journalist of 40 years, who loved Malay Mail for its witty headlines.

He believes that there is still room for print newspaper despite statistics and technology saying otherwise.

“I think digital space is overloaded with all kinds of information. You need printed form of news so that it’s more organised, readers can select what they want to read.

“The digital space is so crowded nowadays, you are fighting against everyone, not just news outlet but also bloggers and social media,” he said.

Devan, who first moved to Kuala Lumpur in the mid 1980s to pursue his journalism career, can even fondly recall a front-page headline he found so clever and witty to this day.

“I remember there was this one story about how gospel singers in the US... instead of singing choir songs they were trying to appeal to the youngsters to join the crowd and churches.

“I think there was one church that introduced modern music and the headline was Pop Goes the Gospel — which was quite clever actually,” he said.

His colleague, executive news editor Raynore Mering, also finds it a sad end to a great era of news reporting but realises the end of an era is merely the beginning of a new one.

The Sarawakian journalist, who has been in the industry for more than 20 years, acknowledges that the industry is changing due to the advances in technology and mindset among the younger generations.

He hopes the end of Malay Mail’s century old print lifespan will translate into greater things to come in the digital era of the news organisation.

“I hope that Malay Mail will be the go-to news portal for not only Malaysians but for everyone who is interested in Malaysian affairs.

“I do not have a favourite segment in particular but I have always enjoyed how Malay Mail approaches its news content, always seeking more depth in reports and presenting them as a good read,” he said.

The get-together in Malay Mail’s office at Section 13 here saw veterans of the news industry coming together to commemorate it’s historical last print run while celebrating its rebirth into a new format.

They gathered around the paper’s printing presses to witness Malay Mail’s final print run with Wong given the honour to activate the machines for the last time at 8.46pm.

The last edition of Malaysia’s oldest newspaper, which is a 60-page commemorative edition, completed its run at 9.05pm and hits the streets tomorrow morning.

Many who attended admitted feeling a great loss, as if a close friend had pass. The list of those whose sentiments got the better of them include the writer of this article.

However, as Siew said, from the ashes, Malay Mail will rise again as a phoenix.

And that is something worth celebrating.