KUALA LUMPUR, April 15 — St Andrew’s Presbyterian Church in Kuala Lumpur today held their centenary inaugural service to mark the 100 years since it was opened, and commemorated the special occasion by preparing a second time capsule.

The second time capsule prepared for the generation to come had five items in it, including four Malay Mail newspaper articles about the historical church from last year.

St Andrew’s Secretary Centenary Steering Committee member Kenneth Tan told Malay Mail that the new time capsule was bought from Australia from a professional seller as they wanted to ensure that items placed inside could withstand the test of time.

“When we found the first time capsule last year, some of the items kept inside were damaged. So there is a big responsibility to ensure that the second time capsule will be more durable,” he said.

Kenneth said the second time capsule, which is to be opened another 100 years on, is designed to withstand moisture and will be a vacuum container. The second time capsule will contain Malay Mail articles, a Bible, coins from the church’s donation box, a church service program and a digital history of the church. — Picture by Ham Abu Bakar

Last year on February 19, the St Andrew’s church leadership retrieved the first time capsule from 1917, which was no easy feat, as it took months for the church elders to go through documents to get a clue to the capsule’s location.

The capsule which contained a Bible, a hymn book, a copy of St Andrew’s Outlook, a copy of Malay Mail dated October 3, 1917, Straits Currency coins in the denominations of one dollar, 50, 20, 10 and 5 cents was found “underneath” the foundation stone that was laid in 1917.

Kenneth said the pages of the documents and the papers had stuck together because of water seepage.

“This time we will not bury the time-capsule underground but place it inside a new bell tower which will be built within the church compound.

The latest capsule will contain, apart from the four Malay Mail articles, a bible, coins from all over the world taken from the church’s donation box, the church’s service programme from the 2017 centenary calendar and videos made by the church on their timeline and history which has been stored in a USB drive, M disc and Blu-ray disc.

“Obviously we don’t know how advanced the technology will be in 100 years to come, so in order to not take any chances we are going to insert the videos in different storage devices,” Kenneth said with a laugh.

Kenneth said while some may consider this old-fashioned, he said the experience of being part of this has been spiritually rewarding.

“This whole experience of discovering the first time capsule and being part of the team to work on the second one has been spiritually rewarding, an experience which in many was supernatural and involved a lot of hard work as well,” he said.

During the centenary inaugural service today attended by close to 100 regular parishioners, church elders took turns to place the items into the time capsule during a special service this morning led by Reverend Dr Robert Weniger, the current minister of St Andrew’s who is from the US.

Kenneth added that another special service will be held when the time capsule is placed in the bell towers after the construction is completed in three months’ time.

The foundation stone for St Andrew’s church was laid on October 3, 1917 on a land which the government had allocated for religious purposes to the church treasurer via a grant.

It opened its doors on April 17, 1918 in a ceremony officiated by then British High Commissioner Sir Arthur Young. The church building was designed in the conventional Gothic style with the typical architectural features of pointed arches, ribbed vaults and flying buttresses; it had a pebble dash finish on its outer walls and cast concrete facades, while teak wood was used for the interior furnishings of the main sanctuary that can fit between 150 to 200 people.

While other parts of the church building were later added on, St Andrew’s main sanctuary which was built a century ago using local labour and local materials ― such as tropical hardwood cengal and teak ― has stood the test of time and remains structurally intact.

The St Andrew’s church leadership said it has yet to decide on whether to apply to gazette the century-old church building as a national heritage, a status with restrictions that may hamper timely maintenance works that have to be carried out regularly.

Today, St Andrew’s church has a congregation of around 700 people from an estimated 25 countries, with over half of them being Malaysians and inclusive of a 100-strong Indonesian congregation.

St Andrew’s was initially started in 1915 to specifically serve the UK expatriate community in Kuala Lumpur, with elder CJ Lim explaining that it was together with St Mary’s Cathedral — these were the two earliest Protestant churches in the city then — respectively serving a predominantly Scottish community familiar with the Presbyterian church system and a mostly English and Welsh community as an Anglican church. 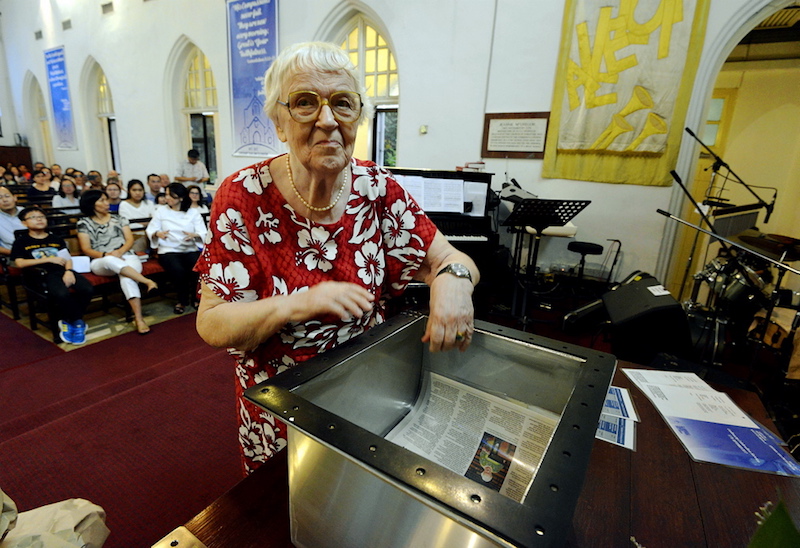