KUALA LUMPUR, March 6 — The Federal Court will jointly hear today five cases in which five stateless people born in Malaysia — to either Malaysian biological or adoptive parents — seek to know what is required for them to be declared as citizens.

Five not Malaysians, beyond their control

The government had refused to recognise these five as Malaysian citizens, due to circumstances such as their birth parents being unknown despite having adoptive Malaysian parents, or because some of them were born out of wedlock to a Malaysian father and non-Malaysian mother.

All five were children when their court cases to be recognised as citizens first began, but one of them has over the course of court hearings turned into an adult and will be 20 this year.

The key issues that led to this Federal Court hearing

These cases revolve around the courts’ interpretation of the Federal Constitution, mainly Article 14(1)(b) which deals with the acquiring of citizenship by operation of law for those born after Malaysia was formed, and the related conditions under Part II of the Constitution’s Second Schedule.

The key constitutional provisions cited in these cases are Section 1(a) and Section 1(e) of Part II of the Second Schedule.

In the written judgments by the Court of Appeal in four of these five cases, the judges said these citizenship requirements involve both the concepts of “jus soli” — birth right citizenship or the right to citizenship according to birth place, and “jus sanguinis” — the determination of citizenship based on lineage where at least one parent is a citizen.

Complicating matters in these citizenship cases are illegitimate births or children not born in a valid registered marriage, especially when it involves a non-Malaysian mother. This is due to Section 17 of Part III of the Second Schedule saying that the “parent” of an illegitimate child will be considered to refer to the mother, with the Court of Appeal saying in Lim Zu Yi’s case that this meant he had taken on his biological mother’s Thai citizenship and not his biological Malaysian father’s citizenship.

A problem for adopted children is where no one knows the identity and citizenship status of their biological parents, which has caused the National Registration Department (NRD) to refuse registering these children as Malaysians even when they have been adopted by Malaysian parents.

In the first two cases represented by lawyers Raymond Mah and Datuk Cyrus Das, 17-year-old boy P* and 16-year-old boy C* with unknown birth parents were both separately adopted by two Malaysian couples, but were not recognised as citizens.

P had succeeded in his citizenship bid at the High Court — which had cited previous court decisions where an adoption order effectively grants citizenship to an adopted child with untraceable birth parents, but this was set aside by the Court of Appeal.

As for C’s citizenship bid also handled by Mah, the High Court had decided to first refer constitutional questions to the Federal Court to decide on.

For these two cases, the Federal Court will hear and decide on seven questions of law, including whether a Malaysia-born child adopted by Malaysians would qualify for citizenship under either Section 1(a) or Section 1(e) of the Second Schedule’s Part II (having at least one Malaysian parent at birth time or not being born a citizen of other countries); and whether “parents” in Section 1(a) refers to a child’s “lawful parents” instead of biological parents.

The seventh legal question for the Federal Court to answer is whether the Federal Constitution’s Article 15A is an “alternative relief” that will bar someone from going to the courts to seek citizenship recognition.

In dismissing P’s citizenship bid, the Court of Appeal had among other things said that he had not used up all other available methods, noting that he could still have applied for citizenship through Article 15A by asking the Home Minister to consider registering him.

Article 15A is on the federal government’s special powers to register anyone below the age of 21 as citizen.

In the two other cases where Datuk Seri Gopal Sri Ram is expected to be the lead counsel, the 20-year-old T* was adopted by Malaysian parents but with the biological parents also unknown. The adoptive parents had registered themselves as his biological parents in the initial birth certificate and raised him as their own child for 12 years, but the NRD had cancelled T’s application for a MyKad due to doubts over his lineage and reissued a second birth certificate.

After a formal adoption process that included unsuccessful efforts to find T’s biological mother, the adoptive parents then applied in 2012 under the Federal Constitution’s Article 15A for their adoptive child to be recognised as a Malaysian, only to receive a rejection letter from the Home Ministry almost two years later.

The other case represented by Sri Ram involves an eight-year-old boy, Lim Zu Yi, who was born to a Malaysian father and Thai mother that were not legally married when he was born. Lim’s mother is said to have left when he was six months old and to have been uncontactable since then.

At the Court of Appeal last year, the same panel of three judges had applied similar reasoning when rejecting both T’s and Lim’s separate citizenship bids, saying it was not enough for the duo to have shown that they were born in Malaysia. The judges said they should have also shown proof that they were not citizens of other countries.

For T and Lim, the single question of law that was posed for the Federal Court to decide is “whether the principle of jus sanguinis or reference to blood or lineage is a requirement under Section 1(e) of Part II, Second Schedule of the Federal Constitution”.

In other words, it revolves around whether jus sanguinis — the legal principle where citizenship is reliant on lineage and determined by the parents’ citizenship — should be used to determine citizenship status for a person who is born in Malaysia and not born a citizen of any country.

When contacted, lawyer Latheefa Koya who is also on the legal team told Malay Mail that the Federal Court has fixed for these two citizenship cases to be heard together with the rest, saying that the questions may not necessarily be combined but that the issues raised may and will overlap.

For the fifth case involving a child born to a Malaysian father and Papua New Guinean mother who later became a married couple after her birth, lawyer Ranee Sreedharan will be representing the 13-year-old girl, M*, in the bid to secure her citizenship status at the country’s highest court.

Ranee will be arguing on three questions of law, with the third question sharing similarities with the seven legal questions, namely whether it was enough for a person to show that he or she did not become a citizen of any other country within one year of their birth.

Ranee’s two other questions are whether the Legitimacy Act’s Sections 3 and 4 which makes an illegitimate child legitimate from the date of the biological parents’ subsequent marriage can be read together with the Federal Constitution’s Second Schedule’s Part II Section 1 and Part III’s Section 17 to determine a person’s citizenship status; and whether the court may grant citizenship status under Section 1(a) to someone who was legitimised based on the biological parents’ marriage date. 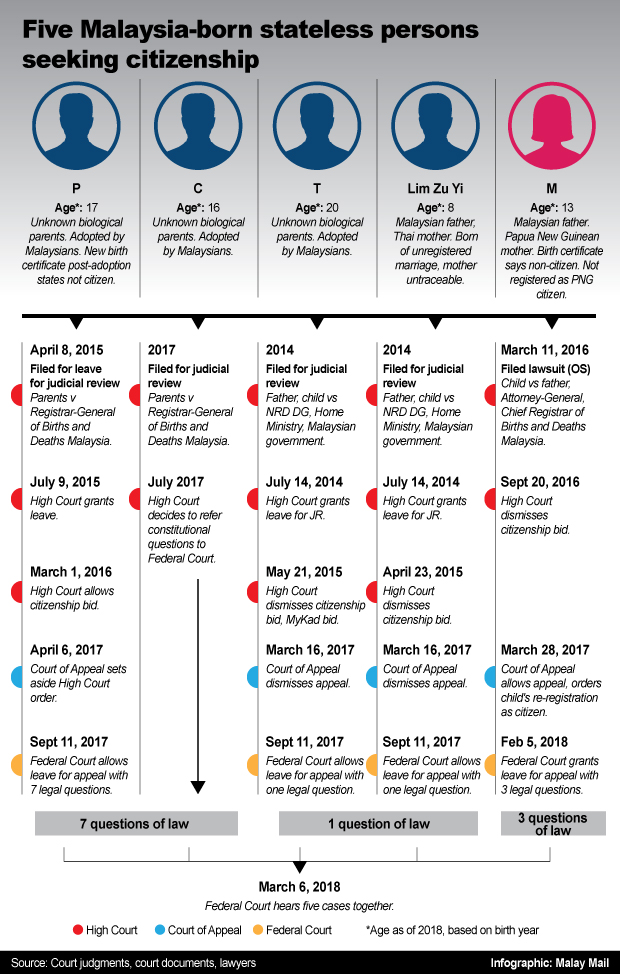 What a life without citizenship means

The fathers of the 20-year-old T and the eight-year-old boy, Lim, are only too aware of the life of uncertainty and hardships that await their children if the Malaysian government refuses to recognise the latter as citizens.

The duo’s fathers had — in separate supporting affidavits or sworn statements to back their court cases — shared the same concerns over their children being rendered stateless with the denial of Malaysian citizenship.

“He will also not have valid status or be recognised by any government agencies or private agencies and be forced to leave without personal identification documents. This status of being stateless will continue on and give impact to future generations if he has children.

“The second appellant (my son) will also face problems when facing legal enforcement such as the police and Immigration despite not being a foreigner.

“Subsequently he will face difficulties in doing any registration or getting civil documents relating to birth, death, marriage, driving licence, business, passport and so on,” the two fathers had told the courts in their 2014 affidavits.

Lim’s father had also said that his child will be denied the rights and benefits for a Malaysian citizen such as studying at public schools, medical treatment in public hospitals and a legitimate job; while T’s father said he would be unable to sit for major examinations or further his studies abroad if he wishes to do so.

*The actual names were not used due to privacy reasons.