PETALING JAYA, Feb 19 — Frequent users of Malaysian roads could be forgiven for thinking potholes are installed from the very start, but authorities in charge of their construction insist this is not so.

Malay Mail spoke to the Public Works Department (PWD), the Malaysian Highway Authority (MHA), the Kuala Lumpur City Hall (DBKL) and the Petaling Jaya City Council (MBPJ) in a bid to discover why Malaysian roads are as frightful as they are.

All four insisted that local roads are as good as anywhere else in the world when they are new.

The PWD, for instance, said it uses the same standards as member nations of the World Road Association, which specify clear standards for the design and safety aspects of roads.

However, what starts out on par with the rest of the world does not stay that way for long. All four authorities said once third-party contractors are involved, the spiral towards Malaysia’s infamous roads begin.

DBKL Civil Engineering and Urban Transportation Department director Abdul Hamid Surip said its checks show that 70 per cent of potholes and damaged roads are caused by sub-par remedial works by contractors, especially those hired by utility and development companies.

The matter is also exacerbated by rapid development and the needed infrastructure to support this.

“They (third-party contractors) often fail to meet specifications, which lead to damaged roads. Such issues also arise from illegal road works,” he said, referring to repairs performed by unlicensed firms.

“We find ourselves constantly reminding the utility companies and even third-party contractors to rehabilitate the roads to requirements,” he told Malay Mail.

While all agree on the main cause for road deterioration, the expected clampdown is nowhere in sight.

Instead, the most common remedy is for the agencies to pick up after the contractors, repairing again the roads the latter are supposed to have fixed.

While the firms that hire the contractors are billed for the cost of subsequent repairs, this still doubles the inconvenience for motorists who must put up with twice the disruptions and the bad roads in between.

The authorities say their hands are tied when utility firms and others keep reusing such contractors, even with the financial penalties that accrue when the repairs must themselves repaired.

One agency said that while it advises the utility firms and others not to re-use the services of these contractors, it was powerless to stop them from doing so.

On their part, the agencies said they have strict rules for their own contractors who fall short of expectations.

“Following a non-conformance report produce against a contractor for sub-par repairs works, we would provide the company an allotted time based on the repair work needed to re-do their works until it is up to specification,” PWD director-general Datuk Seri Roslan Taha.

“However, if they fail, we would effectively deregister said contractors from future services.”

All four authorities told Malay Mail they have no record of any contractors blacklisted for the entirety of 2017.

Further down the rung of possible causes for the condition of local roads was weather, which both the PWD and MHA cited as a major factor for deterioration.

“Water is the main enemy of road engineering. Our roads suffer greatly from the wet weather. The effects vary from sunken roads to potholes, to even other types of damages,” Roslan said.

Malaysian Highway Authority director-general Datuk Ismail Md Salleh went on to explain that the problem can be magnified by the local geography, such as slopes that encourage ponding that magnifies road wear.

Overloading was also another issue as heavy vehicles become ubiquitous due to the demands of Malaysia’s rapid expansion, which is compounded by the country’s legacy road standards.

“Roads built after Merdeka were mostly based on an 8-tonne legal axle loading. In the 2017 revision of Weight Restriction Order, the legal axle load was increased to 12-tonne on a certain category.

“However, an increase of four tonnes in legal axle load actually translates to a 5.8 times more damaging effect on the road pavement structure, which means the road will deteriorate faster,” Roslan explained.

He pointed out that while complaints about bad roads were common, these varied according to which authority was in charge.

Roads under his former employer were not as regularly affected, he said, explaining that the PWD was very strict in enforcing its standards.

He said that with the right mindset and proper funding, roads could be kept in better condition for longer.

“Get the right people to do the job and have the maintenance mentality,” he added. 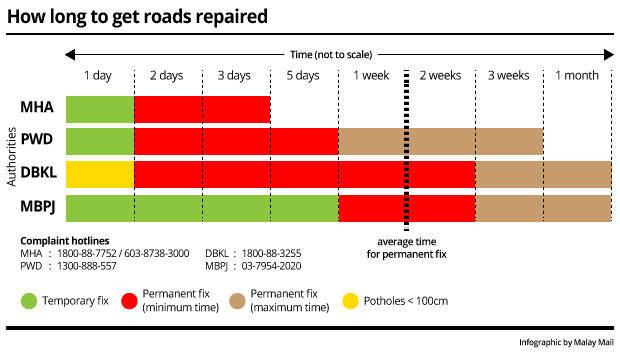