Has Mandarin replaced Hokkien in Penang?

Roy Krsna Nair, 28, whose mother is Chinese and father Indian, speaks fluent Hokkien. ― Pictures by KE Ooi
Follow us on Instagram, subscribe to our Telegram channel and browser alerts for the latest news you need to know.
By By Opalyn Mok

GEORGE TOWN, Aug 19 ― Can you imagine Hokkien not being spoken in Penang?

Well, this just might happen as more and more young Penangites do not speak Hokkien at all.

However, Universiti Sains Malaysia Associate Professor Goh Sang Seong thinks that Hokkien and other mother tongue-dialects will not die out if there is more awareness about the importance of passing down these dialects to the next generation.

“There are still many families, particularly those who are lowly educated, that still use dialects at home,” he said.

From the time the first sinkeh (Hokkien for newcomer and what immigrants from China were called) set foot on the then-Prince of Wales island, Hokkien, mixed with a smattering of Malay and English, has been the lingua franca.

It was the language spoken by a majority of the sinkeh and it was also used to trade… so much so that even the Malays and Indians picked it up. There was even a Hokkien school back then.

Today, almost a century later, Hokkien has evolved to include a lot of Malay words; this can be attributed to the dominance of Baba Nyonya Peranakan culture here.

While Hokkien is still commonly spoken by some hawkers and market traders, many among the younger generation and urbanites do not speak it as much anymore.

Most of the younger generation, regardless of whether their mother tongue is Hokkien, Cantonese, Teochew or Hakka, either speak Mandarin or English at home instead.

Goh said most parents encouraged their children to speak Mandarin or English because they believed mother tongue-dialects to be of a lower standard in comparison.

“In terms of language development, languages taught in schools will become more dominant in any society so it is not surprising that Mandarin, which is the main language used in vernacular schools, is widely spoken and used,” he said in an email interview with Malay Mail Online.

He said it was for this reason that there is less awareness of the importance of preserving mother tongue-dialects today.

“Community perception also caused a drop in dialect use because most Chinese believed that speaking in dialect reflected a lower social status.”

Some Penang-based youths agree with Goh that mother tongue-dialects, especially Hokkien, will not die out so easily.

One of them, Roy Krsna Nair, 28, who speaks fluent Hokkien, said there are still a lot of hawkers who speak it.

He then proceeded to point out several non-Chinese friends who can speak Hokkien fluently... just like any Penangite.

“It's true that a lot of youngsters don't really speak it anymore and it may be dying but there is hope yet.

“We have to be proud of how Hokkien has allowed people from all walks of life to mix together, to have this sense of community.

“If a Penangite goes anywhere outside of Penang and hears another person speak Hokkien, they immediately form a connection, there is this sense of pride of being a Penang-lang,” he said.

Roy, whose mother is Chinese and father Indian, picked up Hokkien from his maternal grandmother but did not learn Tamil or his father's mother tongue, Malayalam.

“My father speaks fluent Hokkien too because he grew up in the Air Itam area with Chinese friends,” he said. 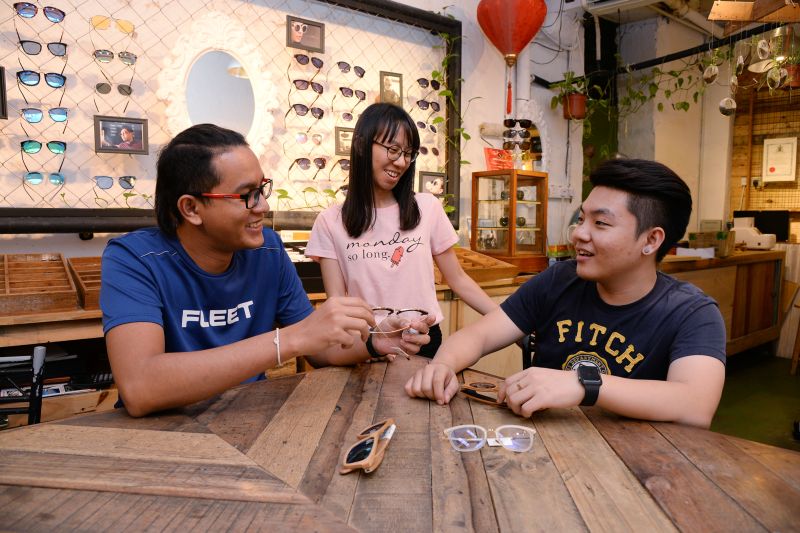 As for 23-year-old sales coordinator, Choo Chin Jet, he converses in Hokkien with his friends and parents so he doesn't believe that it will die out so easily.

“My father is Teochew and my mother is Hokkien so my grandfather made sure that we all can speak Teochew because he did not want us to forget our roots, our mother tongue,” he said.

Other than Teochew and Hokkien, Choo can also speak Cantonese and Mandarin on top of English and Malay which he learnt in school.

“There is nothing wrong with learning more languages, I feel that it is necessary for better communication and I will definitely pass on my mother tongue and the dialects I know to my children in future,” he said.

Even sales assistant Tan Wei Jun, 27, who cannot not speak Hokkien fluently, believes that the dialect will not die out so easily.

She explained she was forced to learn her own mother tongue after coming to Penang to work because that was the only way to communicate with local hawkers and traders.

“I am from Sungai Petani, my father is Hokkien and my mother is Teochew but we spoke Mandarin at home so I never did learn their dialects,” she said. Tan can understand some Hokkien and is able to speak enough to order food.

“I can't hold a conversation in Hokkien, I will revert to Mandarin or English,” she said.

For the youths, learning a dialect, whether it is Hokkien or Teochew or Cantonese, is also dependent on its necessity as multi-lingual Lee Chalyn pointed out.

The 22-year-old illustrator speaks Japanese, Korean, Thai, Mandarin, English, Malay and a little bit of Hokkien which she only learnt at 16.

Her father is from Selangor while her mother is from Penang but she said there was never any necessity to learn Hokkien until she started mixing with a group of Hokkien-speaking friends in school.

“My father is a tour guide so I picked up Japanese and Thai from him and I learnt Korean when I was working overseas in a hotel and dealing with a lot of Korean visitors,” she said.

Lee said if not for her friends and now being based in Penang, she probably would not have made an effort to learn the dialect.

“I won't really make an effort to learn more if I don’t need to...  but now I need to use it to order food so I will  try to improve my Hokkien,” she said.

She said learning a language is more to do with the necessity to communicate and less to do with culture and heritage.

“My roots is Chinese and being able to speak Mandarin is good enough,” she said.

Another person picking up the local Hokkien dialect out of necessity is college student Sharvin Sangkaran.

The 23-year-old from Kuala Kangsar speaks fluent Cantonese. His mother is Chinese while his father is Indian.

“My father speaks Cantonese to me actually and I learnt it because everyone speaks it where I come from and now that I am living here, I have to learn Hokkien,” he said.

Though they may not be fluent in their own mother tongue, Lee and Tan both felt that there is a need to pass down dialects to future generations.

“Even though I can't speak it fluently, I do hope in future, maybe when I have children, they can learn it from others,” Tan said.

Sharvin also said Mandarin may be more commonly used due to it being the language of instruction in vernacular schools but dialects are still widely used by local communities.

Goh, who specialises in translation and interpretation, said there are ways to preserve and pass down dialects to future generations.

“Dialect-based clan associations can be more active in organising more activities to attract the younger generation,” he said.

He said parents must also remember that dialects are equally important so there should be an awareness campaign to remind parents not to forget their own mother tongue.

“With more awareness, parents will choose to use their own mother tongue at home,” he said.

The recent publications of Hokkien dialect dictionaries will also help preserve the nuances of the dialect and they can be used as educational tools to teach the dialect, he added.