Big data in healthcare: What we (need to) know

KUALA LUMPUR, April 21 ― The use of big data analytics to document, track and forecast trends is becoming increasingly popular and commonplace in every industry with the goal of increasing productivity and efficiency.

So it should come as no surprise that the government is trying its hand at the use of “big data.”

Earlier this week, the Ministry of Health (MoH) launched the Malaysian Health Data Warehouse (MyHDW), which aims to connect public and private hospitals as well as clinics in order to share a variety of information and knowledge including a patient’s medical records in a secured system.

According to MoH, MyHDW will synchronise patient data from public and private clinics and hospitals, including university hospitals and Armed Forces hospitals, as well as data from the National Registration Department (NRD), the Department of Statistics, and other “health-related agencies.”

In explaining the reason for MyHDW, Health Minister Datuk Seri Dr S. Subramaniam described it as a one-stop centre for health-related data gathered from public and private hospitals which will eventually assist healthcare providers in making more educated decisions in the future treatment of patients.

Right but what do we know so far?

There are obvious benefits using big data in healthcare. It can help enable healthcare providers to predict diseases before an epidemic breaks out, cure ailments and ultimately avoid preventable deaths.

In the case of MyHDW, what we know so far is that work on this project started in 2010. According to a project blueprint made available on their website, it was envisioned to meet the need for a timely provision of health information and management, and to act as a “trusted source of truth” which can be used to “better manage the health system, provide surveillance information and in addition provides a valuable source of data for research.”

MoH's contention is the previous methods of collecting health data manually resulted in the creation of multiple systems without integration.

This was not only costly but did not allow a patient's medical records to be shared if treatment at another hospital or healthcare facility was necessary. 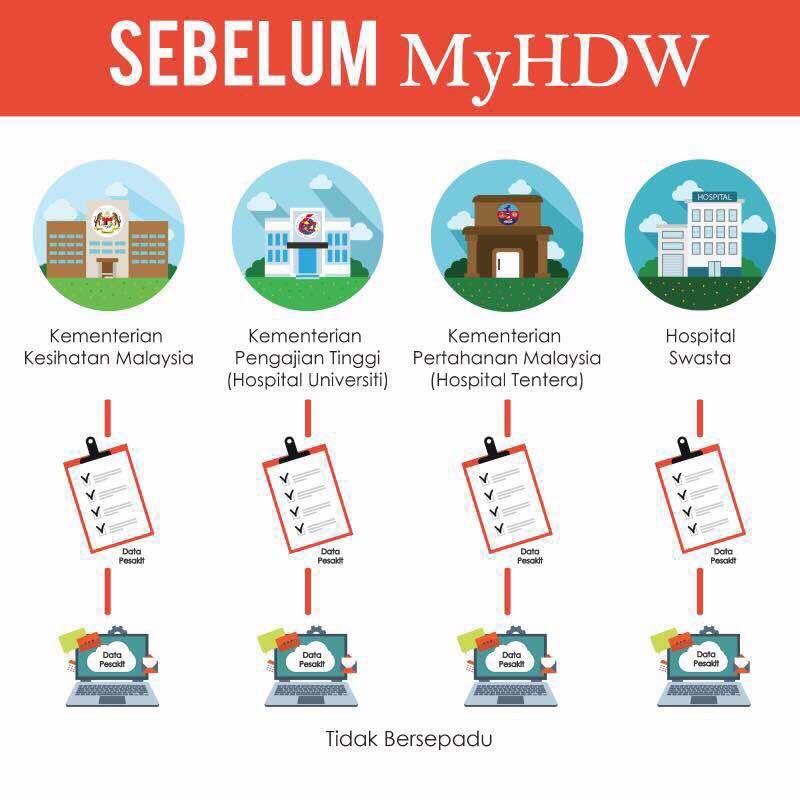 Dr Subramaniam argued that MyHDW will focus on “detailed data collection” for query and analysis purposes, and that this will eventually allow physicians or researchers to find out about things like the percentage of diabetic or cancer patients in the country.

The MyHDW system, currently at Phase One, has already collected data from 2.5 million inpatients from all government and public hospitals, military hospitals and daycare unit services.

Phase Two aims to collect 70 million outpatient  medical record data from other healthcare facilities such as health and specialist clinics.

MyHDW was developed by MoH in collaboration with Mimos Bhd, a technology provider under the Ministry of Science, Technology and Innovation (Mosti).

While these are indeed welcomed developments to Malaysian healthcare, the main concern is whether or not there are privacy issues concerning MyHDW and who has access to confidential patient data.

MoH has given an assurance that MyHDW prioritises data security and privacy of patients and that access to information contained within the data warehouse will be highly “regulated and secured.”

Dr Subramaniam has also said that general health data will be made accessible to all, including the public, but sensitive information relating to patients’ privacy and identities will not be revealed.

“There are concerns, the health status of individuals and whether they would like this data to be stored somewhere. And does this violate individual privacy issues especially involving access to the history of illnesses and the diseases they may have?” Klang MP Charles Santiago said to Malay Mail Online.

He said MoH has to publicly clarify the protocols in place for the collection of patient data, and whether this meant that doctors would have to ask for the said patient's consent before the data is collated by MyHDW.

Santiago added that another issue was whether pharmaceutical companies and insurance companies would have access to the data mined by MyHDW.

“Will the information go to them? If it is for research alone I can understand, but if data is sold to big pharma insurance companies, it brings about the question of confidentiality of medical care.

“Sometimes you are sick, and you recover. But if that information is made available to insurance companies, they will not insure you after that,” he added.

Azrul Mohd Khalib, senior manager of external relations with local libertarian think tank Institute for Democracy and Economic Affairs (IDEAS), said that there are currently a number of laws and codes of conduct governing the use and management of personal data, including medical records such as the Malaysian Personal Data Protection Act 2010, the Malaysian Medical Council's guidelines on patient-doctor confidentiality and its Code of Professional Conduct.

“However, it is interesting to note that the PDPA does not apply to the government sector,” he told Malay Mail Online, using the abbreviation for the Personal Data Protection Act.

“By centralising all medical information into a government facility such as the MyHDW, does that mean that all previous protection for medical data under the PDPA no longer applies, and that explicit consent from patients is no longer needed or necessary?” he asked.

Azrul also said MyHDW's linkage with the NRD would suggest that the data sets will most likely be linked a person's identification number, and that they can be identified by those with authorised access.

He also said there are concerns as to whether public consultations with regards to this project were made prior to the launch, and that there should at least be focus group discussions in place to gauge public sentiment.

“We are concerned whether there was sufficient consultation with private and public stakeholders prior to the deployment of the system.”

But Khairil Yusof, co-ordinator of non-profit research organisation Sinar Project, does not believe that MyHDW is storing and tracking electronic patient records which makes the issue of privacy concerns a moot point.

“MyHDW at a glance looks like it is just streamlining the gathering of medical data from different sources for better analysis by researchers and research departments. It is not a shared and centralised individual electronic patient record system. This distinction is very important.

“The latter (shared patient records) will raise a lot of privacy issues. The former as what MyHDW publicly says it is doing, should not raise many privacy issues. If implemented properly, it should help MoH with better policy making, for example knowing which areas, clinics or hospitals require better campaigns and facilities for diabetes for example,” he said.

Health policy researcher Dr Lim Teck Onn told Malay Mail Online that collecting personally identifiable data is “unavoidable” and that it would be pointless without it.

“The point is whoever is hosting the data must ensure data security and of course all data release to internal or external users must be de-identified. So protecting privacy and data security is a given, else the initiative will fail,” he explained.

What we need to know

“The medical industry collects a huge amount of data but often it is siloed in archives controlled by hospitals, clinics and administrative departments.

“Done properly, this system has the potential to reduce the cost of healthcare, cut down on wasteful overheads and optimise the use of limited resources.

“It can be used to better understand and respond to epidemics, cure and treat infectious diseases, avoid preventable deaths and improve the general quality of life and well-being of Malaysians,” IDEAS's Azrul said. 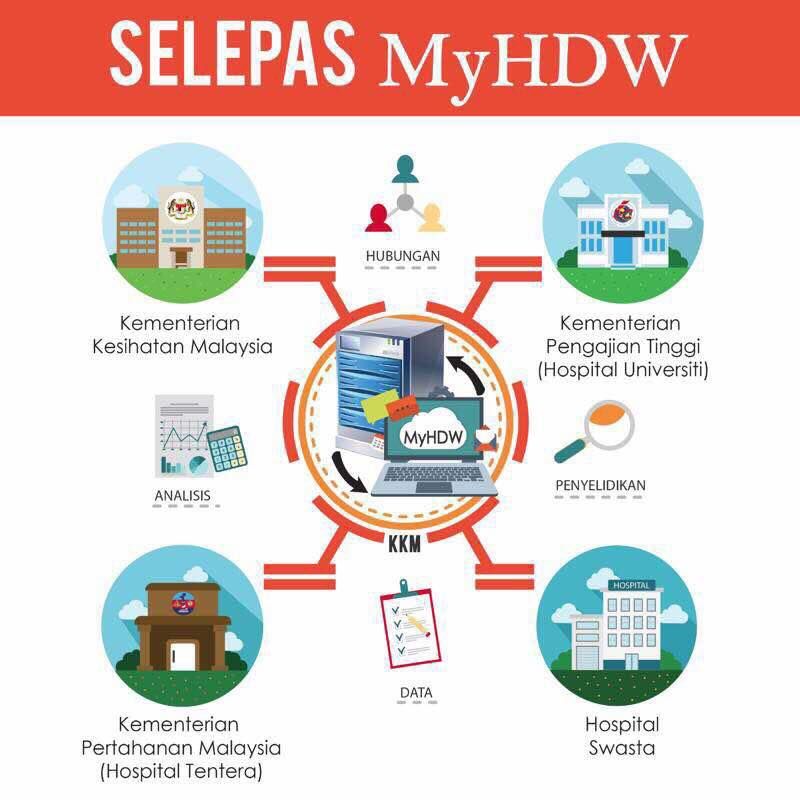 But he stressed that potential issues with MyHDW need to be ironed out now, and that there is a need to take into account public trust, patient privacy issues and confidence, as this is about handling the most sensitive of data ― a person's health.

“Private hospitals have issues with the privacy, but they are still discussing,” Dr Chew told Malay Mail Online.

Dr Lim pointed out that compiling large data repository from diverse sources to support health/business intelligence, health surveillance and research has always been the responsibility of any government as they are the only ones with the authority to access such data.

In the US and other developed countries, much of these data is freely available to be downloaded, or for a small fee, to researchers.

“Unfortunately our health and other authorities have not been able to deliver on this. Is MyHDW then their answer to this? This looks more like another IT project rather than health data initiative (the two are invariably confused in the country).

“No authorities in Malaysia have ever been able to deliver on this (surely this is no rocket science), so will it work this time? The proof of the pudding is in the eating; I will believe it when I can download data from my laptop,” he said.