Rizal Ramli, Nor Azizah Karin and two of their seven children pose for a picture at their Kota Damansara PPR unit. — Picture by Choo Choy May
Follow us on Instagram, subscribe to our Telegram channel and browser alerts for the latest news you need to know.
By BOO SU-LYN

The paint on the front door of the 36-year-old man’s three-bedroom People’s Housing Programme (PPR) unit is peeling and clothes are strewn all over the floor as there are no cupboards anywhere. In fact, there isn’t even a dining table, chairs or a TV.

The walls are also covered with children’s scribbles because they have no colouring books or even paper to draw on.

“I haven’t been paying rent since 2011,” Rizal told Malay Mail Online. Rizal — who only earns about RM1,000 a month selling fried food like chicken nuggets and potato wedges cooked by his wife — said rent was doubled from RM124 to RM250 a month in 2011 without any discussion with the residents.

He said the management — Perumahan Dan Hartanah Selangor Sdn Bhd (PHSSB), a subsidiary of state-owned Lembaga Perumahan dan Hartanah Selangor (LPHS) that took over management and operations of the building in May 2013 from the Petaling Jaya City Council (MBPJ) — has tried to evict his family two or three times, but were unsuccessful as they didn’t have a court order.

(A check with PHSSB later revealed a strange contradiction in facts. They insist that they have a 100 per cent rent collection rate, though this is not always paid on time.)

“I tell them that I’m not a pendatang,” said Rizal, who was among the first people to move to the Kota Damansara PPR 14 years ago. 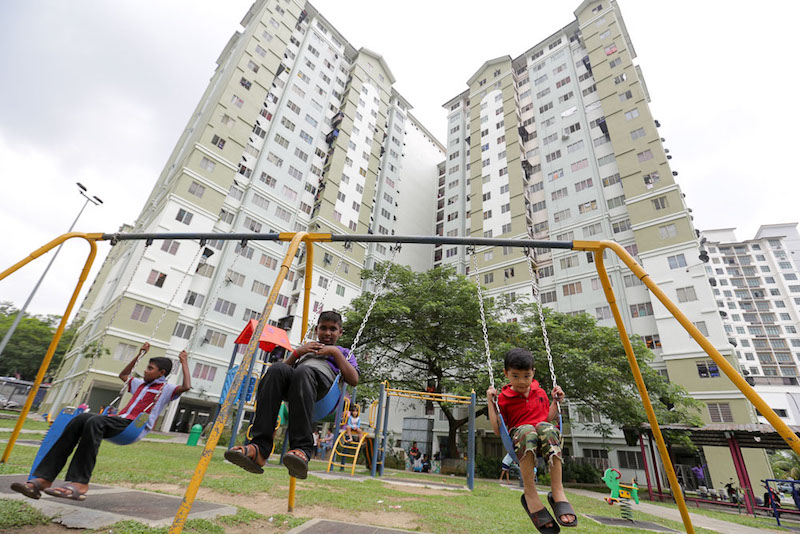 Children play in the small playground at the Kota Damansara PPR. — Picture by Choo Choy May

Then there are his monthly expenses: Groceries cost about RM500 a month, formula milk and diapers (RM300), school expenses like the children’s allowance (RM200), utilities (RM150), school books (RM60), taxi rides to send two of his children with asthma regularly to the Sungai Buloh Hospital (RM150), handphone bill, including his wife’s (RM60), which comes up to roughly RM1,420. Sometimes, he can’t even afford to pay his water and electricity bills. He uses a prepaid plan for his mobile phone and buys RM10 credit whenever he can.

He said he doesn’t get zakat funds because he gets RM450 monthly for his children — four daughters and three sons aged between two and 14 — from the Social Welfare Department (JKM). Unsurprisingly, he doesn’t have any savings and his monthly expenses of RM1,420 eat up almost all of his total income of RM1,450.

When asked about family planning, Rizal described his children as rezeki (a blessing), but with the eighth child on the way, he said that he would now start to do “a little planning.”

Currently, more than 5,600 people are estimated to be staying at the Kota Damansara PPR, based on the 1,137 occupied units that house an average of five per unit.

Out of the 74 PPR flats for rent with 97,967 units throughout the country that are built by the federal government but managed by state governments, four are in Selangor, including Kota Damansara. 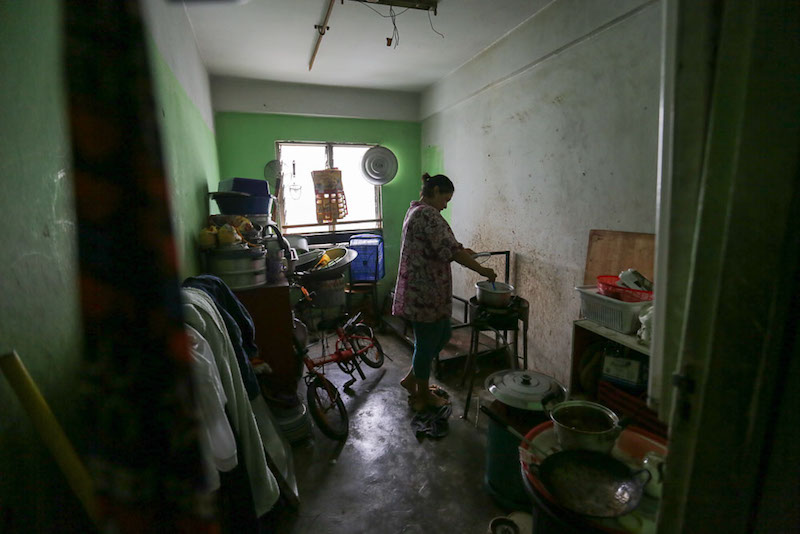 A woman cooks in her Kota Damansara PPR unit. — Picture by Choo Choy May

The ceiling fan in Jamal’s PPR unit is not working, the pipe in his kitchen sink is broken and the toilet bowl has no seat, but management pushes the responsibility of repairs for wear and tear to tenants, even though it is the owner who should bear such costs, according to standard tenancy agreements.

Jamal, a 48-year-old man who is using a pseudonym as he fears retaliation from PHSSB, which once issued a show cause letter to a resident who complained to the press about infrastructure issues, said pipe repairs would cost about RM50 to RM60.

“We can’t afford it,” Jamal, who has been renting a Kota Damansara PPR unit since 2002, told Malay Mail Online in a recent interview.

Jamal’s unit, which houses him, his wife and five children aged between five and 17 (the oldest, 19, is staying at a university hostel), has walls with peeling green paint and graffiti including the alphabet in Jawi and phone numbers, and a clutter of pots and pans.

Like Rizal’s unit, this property also suffers from a lack of furniture; clothes are dumped in a shopping trolley. The kitchen overflows with dirty water once a month because of blocked drains, his wife says. 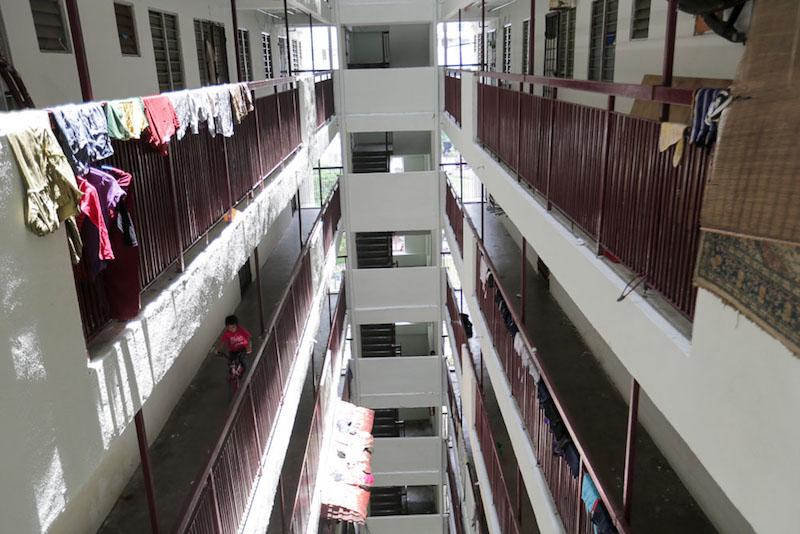 Three children have fallen from the Kota Damansara PPR in recent years, two of whom died. — Picture by Choo Choy May

“If both mum and dad work 12 hours a day, their children will go wild. So I work 16 hours a day and my wife takes care of the kids,” said Jamal, who does odd jobs like driving and earns about RM2,000 a month. He also gets RM500 in zakat monthly.

Jamal, who has rent arrears owed to MBPJ of over RM9,000 since he refused to pay the new RM250 rent rate from 2010 to 2012, said the management recently threatened to evict him, but he sought legal aid and was told he didn’t need to leave because there was no court order.

“We didn’t want to pay the rent then because there were no facilities,” he said. “The lifts were not working, there was no water or electricity, there were burglaries. Those times were terrible.”

Facilities are better now, but child safety is still not guaranteed, according to Jamal who highlighted the deaths of two children in 2013 and 2014 at the PPR. They had fallen from the 14th and 6th floors respectively.

“There are railings now, but the metal is hollow. It’ll rust,” he said. “It’s not a case of children climbing over, but they fell through the railings.”

Despite Jamal and his wife’s impoverished circumstances, the couple insisted on serving us lemang, chicken curry and sup kambing when we visited them for the interview. Some residents such as Chan Yoke Chan, 79, and her husband Toh Hoe Kit, 83, live in better conditions. Their PPR unit was neat and had two tables, chairs, a TV and two single beds.

They live alone as their three children reside in Australia, the UK and Sweden respectively.

Another resident, R. Malathi, also has a TV at home and even an aquarium with three fish, but no tables. She lives with two grandsons whom she raises as her own children, her mother, one of her daughters, and occasionally, her “absent” husband.

She said she makes about RM1,100 a month by sewing curtains for fellow residents. JKM’s E-Kasih programme had given her a sewing machine and sent her for sewing classes. Malathi also gets RM175 monthly from JKM and has received a one-time BR1M handout of RM400. 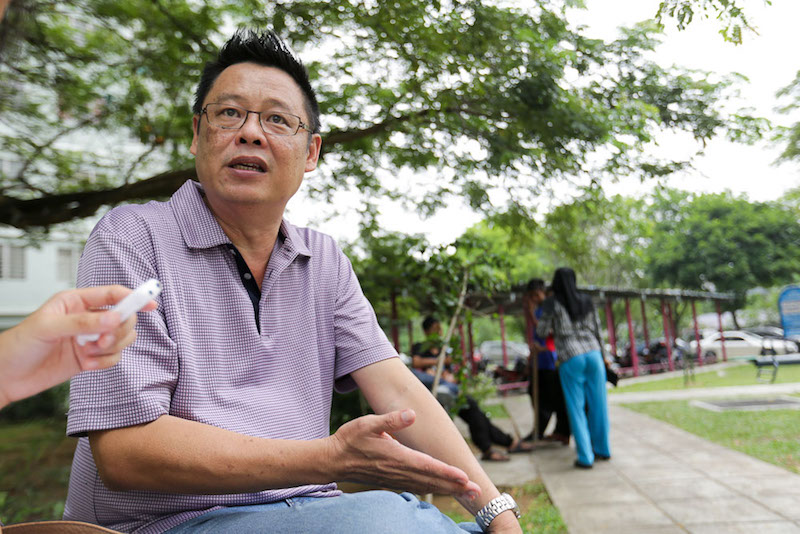 Fong Peng Lim, an activist from child rights NGO Safer Kids Academy who has been working at the Kota Damansara PPR for over two years, told Malay Mail Online about the case of two girls aged nine and 11 who had never attended school because they looked after other people’s children to help their parents earn money.

“In a way, it’s a form of child labour, but you can’t report the parents because if the parents go to jail, what’s going to happen to the family?” Fong, who runs child safety classes, said.

Fong, who is also treasurer of the Kota Damansara PPR residents’ association, said there have also been reports of child prostitution, statutory rape and domestic violence at the flats.

He said one of his volunteers informed him about a single mother who prostituted her three children aged 13, 15 and 17 about two or three years ago, but she has apparently stopped doing so after she was arrested. 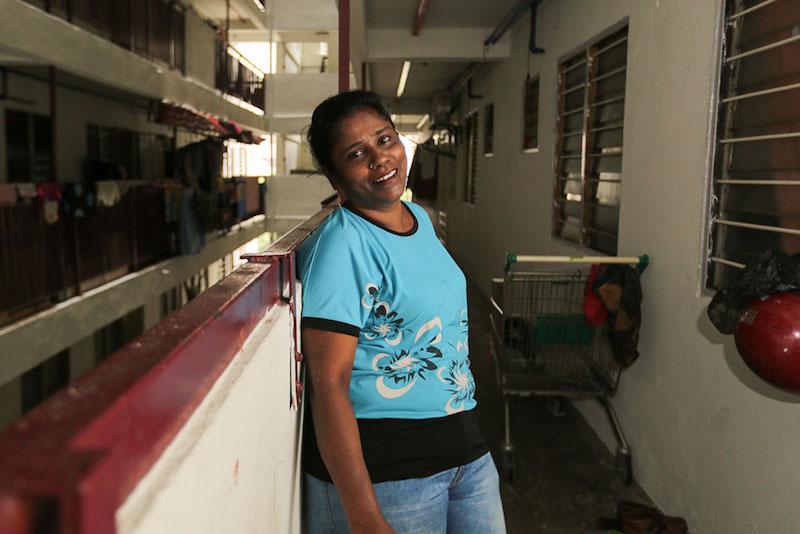 R. Malathi poses for a picture outside her Kota Damansara PPR unit. — Picture by Choo Choy May

Fong also claimed that more than 100 residents have received eviction notices because of rent arrears with MBPJ, or because their unit was not under their name.

“Those tenants who have stayed a long time as sub-tenants, they want to continue staying, but why won’t PHSSB allow them? All it takes is just to change the name of the rental agreement,” Fong said. “And why is PHSSB using rental in arrears to MBPJ to intimidate and bully the poor residents?”

Malay Mail Online could not reach the MBPJ corporate communications department for comment.

According to the minutes of an August 8 meeting that was chaired by LPHS assistant director Norzaton Aini Mohd Kassim and attended by Fong, representatives from MBPJ, the mentri besar’s office, PHSSB, the Kota Damansara PPR residents’ association, as well as Subang MP R. Sivarasa, the MBPJ representative said “the original handover letter between MBPJ and PHSSB states that PHSSB can collect rent and arrears at the Kota Damansara PPR and must return them to MBPJ before the takeover period.”

The minutes, which were sighted by Malay Mail Online, said PHSSB took over management and operations of the building effective May 1, 2013, based on a letter on the takeover of the Kota Damansara PPR from MBPJ dated April 18, 2013. 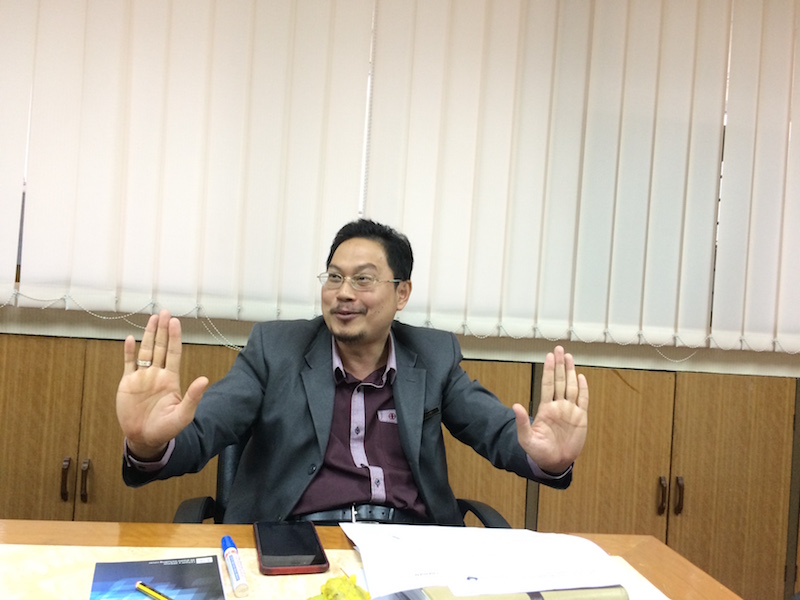 PHSSB general manager Nazmi Osman insisted that PHSSB has the power to collect rent and arrears, which “MBPJ doesn’t collect any more.”

“But when the tenant leaves, we’ll pass the arrears to MBPJ. We’ll inform that this tenant has arrears owed to MBPJ and it’s up to MBPJ whether they want to claim or not,” Nazmi told Malay Mail Online in an interview at the SUK Selangor building in Shah Alam.

He also said PHSSB doesn’t have the power to exempt long-term tenants from paying arrears owed to MBPJ.

“If we exempt them, what about those who paid? Do we give back the money? During the time when they were not paying, they were enjoying the facilities,” said Nazmi.

He added that Kota Damansara PPR tenants were allowed to pay their rent arrears by instalments.

Nazmi also said the decision to raise the rent from RM124 to RM250 a month was made by the previous Barisan Nasional (BN) state government in 2007, which Pakatan Rakyat merely enforced after taking over the state a year later.

He said the RM250 rental rate was imposed on new tenants under MBPJ in 2010, after which, it was enforced across the board for all tenants in 2013 except for single mothers, people with disabilities, senior citizens and those with a household income of below RM1,500 a month.

“Our style, whatever we need to do, we will usually engage the residents,” said Nazmi. 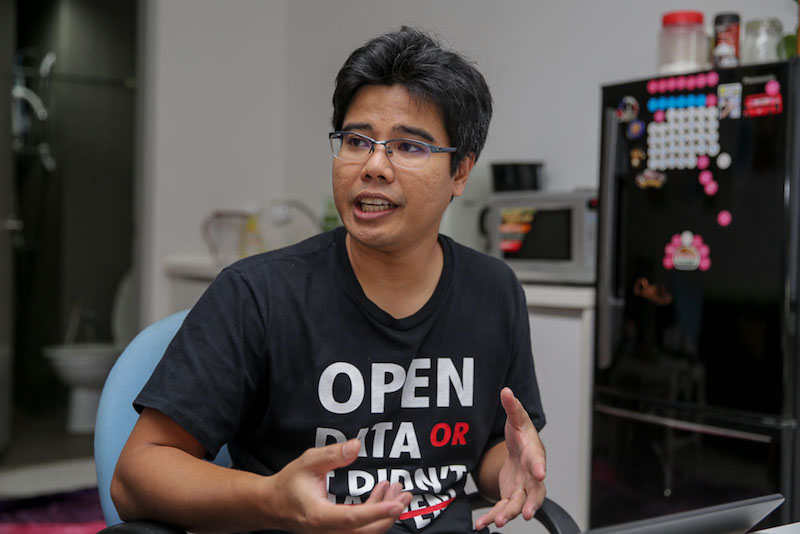 Open data NGO Sinar Project, which did a survey on the Kota Damansara PPR among 257 households comprising 961 residents, found that the median duration of one’s stay at the flats was nine years.

Also, about 41 per cent of households surveyed either did not vaccinate their children or didn’t know their offspring’s vaccination status. Malays were the majority of survey participants at 57 per cent, followed by the Indians at about 16 per cent, and the Chinese at about 5 per cent. Most of the household heads were SPM graduates.

Their median household income was RM1,500 per month with a median of four residents per household. The median household expenditure took up almost all of the income at RM1,400 monthly. Eighty per cent of households surveyed reported drug activity in the flats.

“You’ve got people who are supposed to stay there for only one year before they get on their feet, but they’re living there for eight to 10 years, so that means these people are not moving out,” Sinar Project co-ordinator Khairil Yusof told Malay Mail Online in an interview.

He said with the worsening economy and retrenchments, the lower middle-income group could be caught in a fix as low-cost houses are full with a substantial foreigner population, while PPR flats are full with long-time residents.

“For me, I’m seeing a housing crisis here,” said Khairil.