In Budget 2015 revision, where will Putrajaya cut its spending?

These changes, according to reports, will likely include crucial tweaks to Budget 2015 as Putrajaya takes stock of the fact that because of falling oil prices, it will not rake in the RM235.2 billion income initially projected.

Malaysia’s oil-related revenue accounts for nearly 30 per cent of the government’s total income.

When Budget 2015 was tabled last year, revenue projections for the year had been premised on an overoptimistic forecast that crude oil prices may still fluctuate between US$105 (RM370) and US$110 per barrel.

According to Opposition Leader Datuk Seri Anwar Ibrahim last weekend, even Putrajaya’s savings from abolishing energy subsidies may not be sufficient to foot the revenue shortfall from the global oil price collapse.

“It is true that the movement of international commodity prices is beyond our control. But surely we have control over how we spend our money and manage our overall finances.

“What the government must do now is to act, and act swiftly,” Anwar said.

Amid the tremendous strain on government finances, the Najib administration is now under pressure to introduce prudent measures to safeguard the economy without neglecting a public already forced to cope with heavy household debts and rising costs.

But where will Putrajaya cut its spending?

The elephant in the room

Analyst Wan Saiful Wan Jan said Putrajaya should cut spending by trimming the size of the government, particularly the Prime Minister's Department, which now has 12 ministers.

“The Prime Minister's Department really should not be as big as it is now.

“There should not be any new recruitment, any under-performing staff should not be retained. There is also opportunity to look at (increasing) level of productivity of staff,” the chief executive officer of the think-tank Institute for Democracy and Economic Affairs (IDEAS) told Malay Mail Online when contacted.

Critics of the government's annual budget have also complained for years against Putrajaya’s increasingly bloated civil service and the yearly increase in the money spent to run the bureaucracy.

In a country of 30 million people, Putrajaya had last year allocated RM65.6 billion or about 24 per cent of the entire Budget 2015's RM273.9 billion to pay the wages of the estimated 1.4 million- strong civil service.

The RM65.6 billion is the area with the second largest allocation in the entire budget, where only 20 per cent is slated for development.

What do the economists think?

While economists note the inevitable need for Putrajaya to tighten its belt and slash spending, they said the government was unlikely to pull the brakes on crucial projects that would drive economic growth.

Economist Kristina Fong said Putrajaya has room to trim its operational costs for the day-to-day running of ministries and government departments, pointing out that the government had managed to use less than the Budget 2014 allocation for this purpose.

Another economist, Lim Su Sian, said Putrajaya has “limited' wriggle room as it would want to avoid being “overly conservative” in its spending to keep the economy growing at a healthy pace.

“Broadly speaking, there continues to be a thrust in capex (capital expenditure) spending by the government. I think that should be retained as it helps to achieve medium and long-term economic growth goal.

In the Budget 2015 tabled last year, the government had carved out only RM50.5 billion for development, while the remaining 80 per cent or RM223.4 billion was dedicated to operational costs to run the country.

Cutting back on mega projects

Economist Suhaimi Ilias also said the government is expected to adjust its allocation for development and operating expenditure, predicting that crucial projects would be kept while others are placed on the backburner.

“Non-critical development projects is expected to be deferred ― this will not affect critical projects like MRT and LRT,” the chief economist of Maybank Investment Bank's research unit told Malay Mail Online in an email interview, also saying that the government should “control” its operating expenses.

The focus should be on reconstruction and rebuilding in areas devastated by the worst floods in decades, Wan Saiful said.

He also said that Putrajaya should bring in the private sector through Public-Private Partnerships to cut down on government spending while delivering services to the public.

For Fong, the government would also likely defer projects which would now become more expensive as a weaker ringgit translates into more costly imports.

“There may be some re-allocations to the spending on both the operating and development expenditure side, with potential postponements of some projects, especially those with a high import component,” she said. 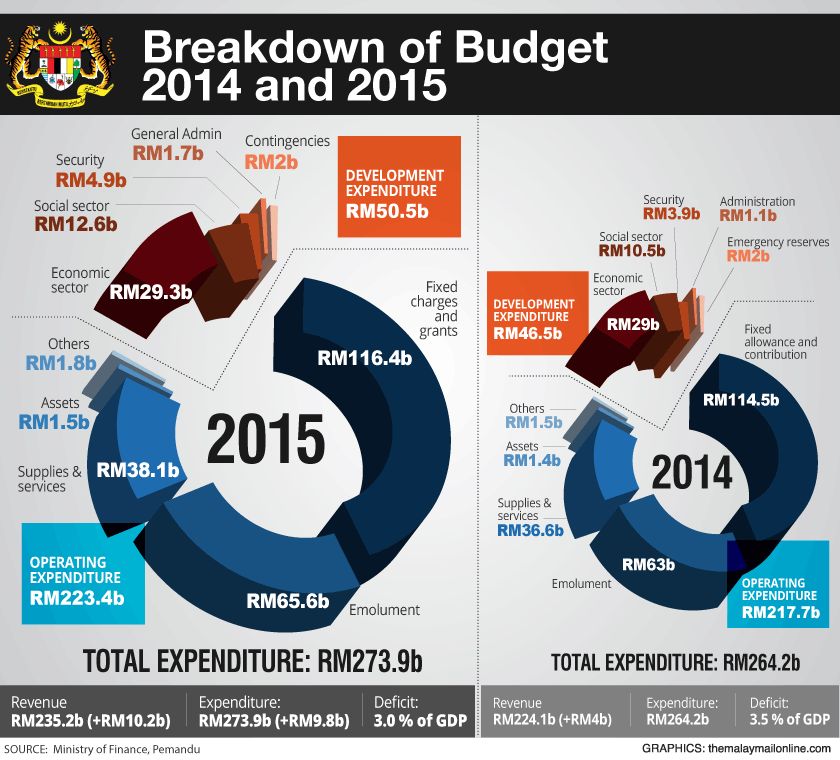