The bulls and sunbear toys in pixel art by Drawdelow viewed using the Perk Reality app at the Augmented Reality Toy exhibition. — Pictures by Opalyn Mok
Follow us on Instagram, subscribe to our Telegram channel and browser alerts for the latest news you need to know.
By OPALYN MOK

GEORGE TOWN, May 2 — Brightly painted and cute toys — a green monster, a pink octopus, cats, bulls and various special characters, to name just a few — loom over visitors to the Hin Bus Depot exhibition space. But they are not visible to the naked eye.

These toys, designed by five local toy designers and artists, can only be seen through the Perk Reality app in its second augmented reality exhibition. 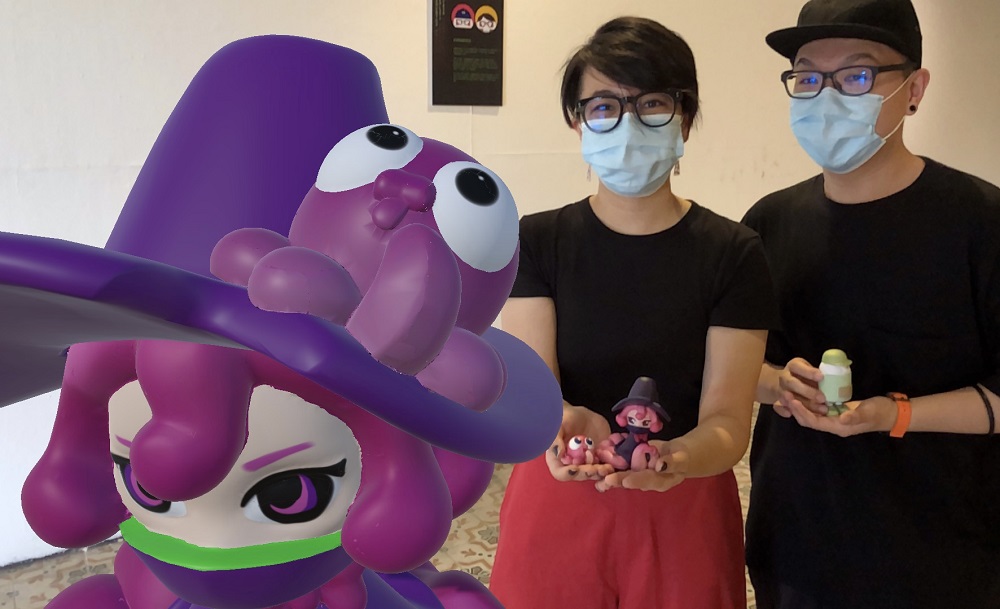 “I want this AR exhibition to be fun and to attract different groups of people of all ages, which was why I decided to get toy designers to feature their products in AR form,” Aboud said.

There are a total of 22 AR toys on “display” where visitors need only scan the large images on the floor using the Perk Reality app to view them.

Visitors can also pose next to the AR toys, most of which will loom over them due to their large size in AR, for photographs using the app. Kangblabla with his AR toy at the exhibition.

Penang-based artist Kangblabla is showcasing six different works of pixel art toys that he created for the exhibition.

“I mainly work with wooden toys but when they asked me to join this group exhibition, I had fun exploring the process of making 3D models and new toys for this,” he said. 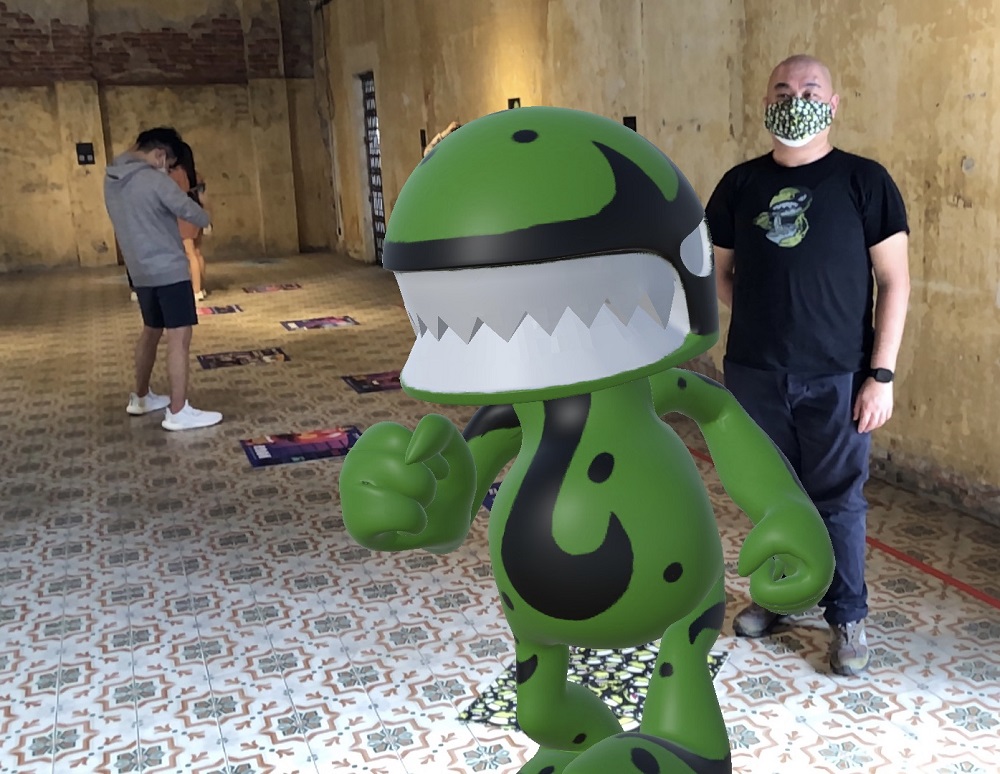 Lim Chun Woei of Urban Cr3atures with his AR green monster at the exhibition.

Lim, who used to join toy festivals and shows around the world before the Covid-19 pandemic, said he redrew and created a new pose for the green monster just for the group exhibition. 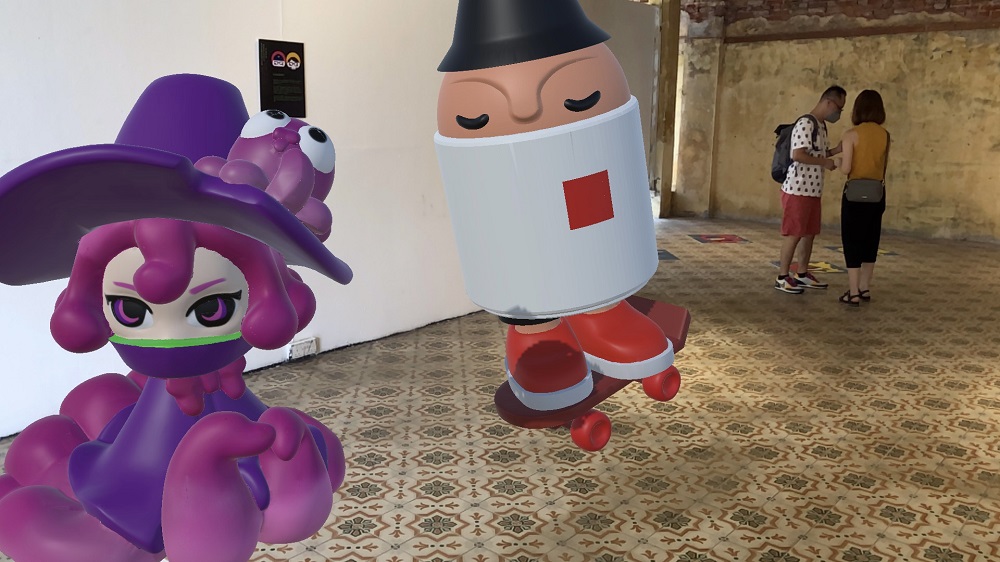 A picture of Stikki and Dango (left) and NOMBS by Kamaboko using the Perk Reality app.

As for Kamaboko, a creative collective consisting of Julia Wee and Darrel Cheong, they decided to feature their two existing characters, a pink octopus character with a smaller octopus companion called Stikki and Dango, and NOMBS, an egg-like cylindrical character with a hat and shoes.

Edward Low or Drawdelow, holding the Bullshit toy while posing with the pixel art AR toys.

“I started to go fully into toy designing last year when I came back to Malaysia due to the pandemic and this exhibition gave me the chance to try out 3D pixel art,” Low said. 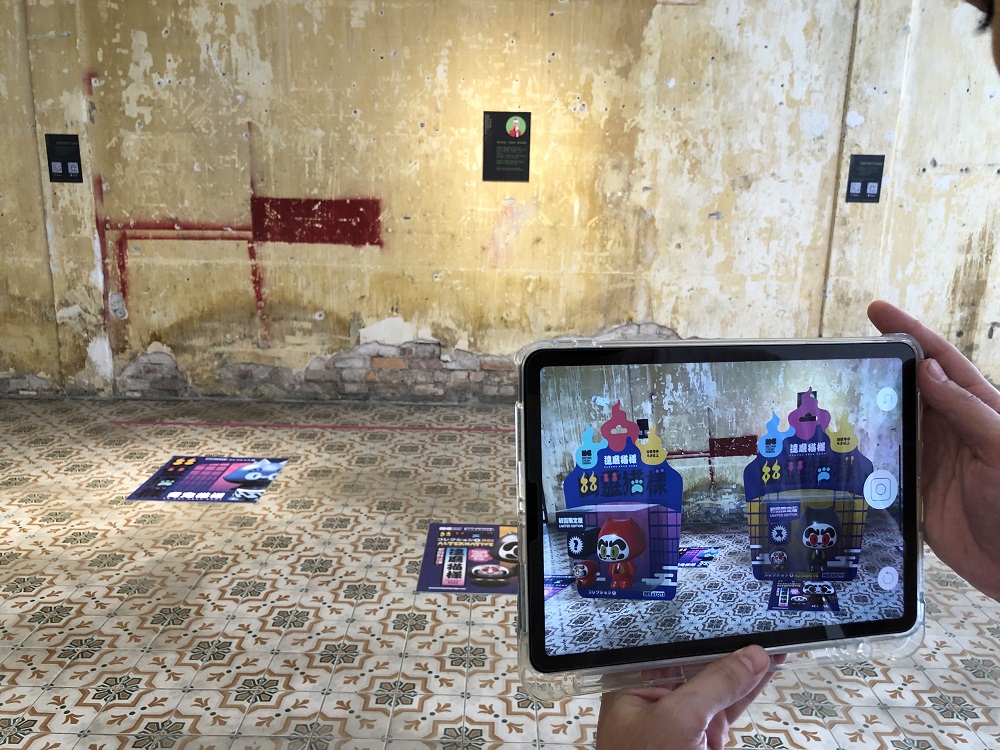 The Yuurei Neko Sama toys by Michael Chuah Design at the Augmented Reality Toy group exhibition that can be viewed using the Perk Reality exhibition.

Finally, a whole range of Japanese-inspired cat toys of the Yuurei Neko Sama universe by Michael Chuah Design is also in the exhibition.

Chuah said he had wanted to try out AR and this exhibition gave him the opportunity to showcase his designs. 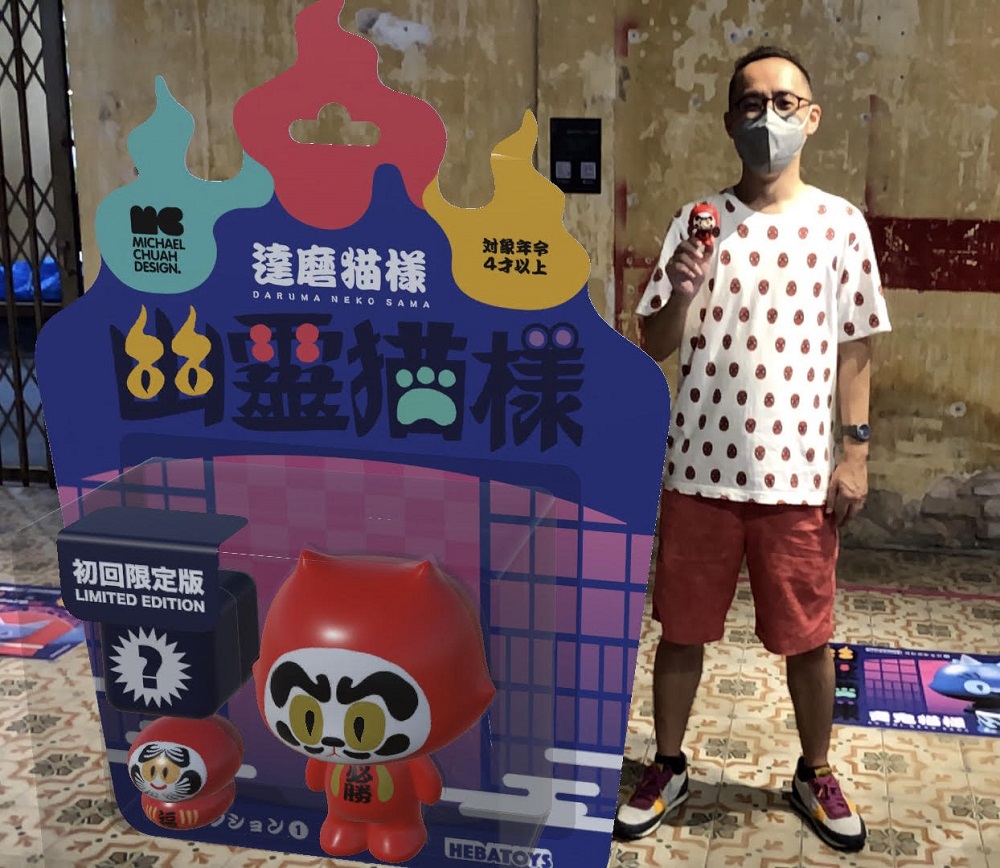 The toy designers have also brought some of the toys to be sold at Hin Bus Depot. Most of the toys are limited editions that will be sold on a first come, first served basis.

The AR Toys group exhibition is fully sponsored by Penang Art District. It is open daily from 12pm to 7pm from now till May 22.