KUALA LUMPUR, June 4 ― When it comes to self-expression, this Malaysian woman is bringing the chills to life with her eccentric choice of special effect makeup.

Be it famous horror film characters or a local dish, 27-year-old Wan Farah Nadia Wan Iskandar finds comfort being creative and taking it to social media.

“Some people would say that I’m wasting my time by doing these special effects makeup.

“But they don’t understand that makeup is my passion, it’s like a form of self-expression to me,” Farah told Malay Mail.

Farah, who is a fan of horror and thriller movies, has been actively sharing her work on social media and has over 30,000 followers on TikTok.

She saw a spike in her number of followers since Halloween last year after posting her ‘Hijabista Clown’ makeup which is her tribute to Stephen King’s IT clown.

The Kelantan-born administrative executive also went viral recently for her rendition of the local dish, lontong.

It was a collaboration project with six friends who decided to do a Hari Raya-themed special effect makeup.

“We decided to go with the Hari Raya theme since everyone can’t go back home for Raya due to the Movement Control Order.

“So, we want to do something to cheer our followers. One of my friends decided to do a cherry biscuit makeup and another had gone with the rainbow biscuit.

“As for me, I chose lontong since it has always been my favourite dish especially during Hari Raya,” Farah said.

Farah, who has been doing special effects makeup since 2014, said that there are challenges in what she does.

The biggest challenge was that it was time consuming, citing that it took her two days to complete her lontong makeup as she had to make her own props.

However, the lengthiest makeup project she ever did was on her rendition of Pale Man from the dark fantasy film, Pans Labyrinth which took her four days to finish.

This is because she used liquid latex as her main ingredient which took time to dry before she could start focusing on the details.

Besides that, her lack of photography equipment also made it hard for her to capture her finished works. 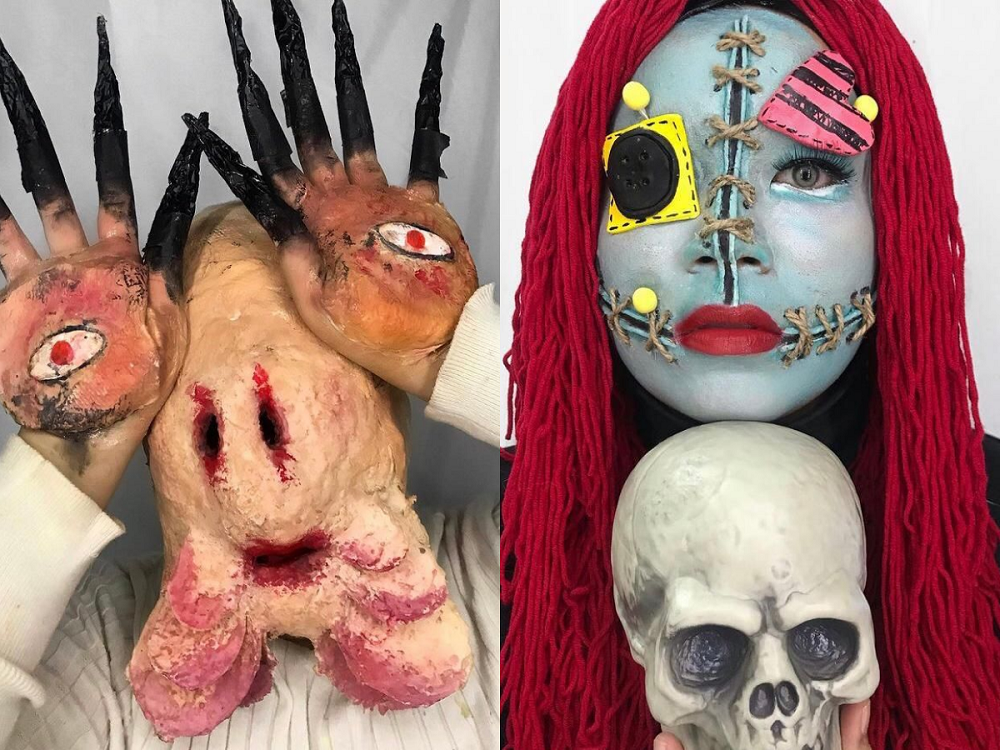 Farah also said she tried to do a 31-day special effects makeup for Halloween last year but had to stop on the 27 day as the makeup was causing an effect on her face.

Although she sees this as a hobby, Farah did not dismiss the idea of becoming a professional special effects artist as she was fascinated by it.

Farah also has a side gig as a makeup artist for special occasions like dinners and dates.

“My top favourite works, so far, are the Pale Man from Pans Labyrinth followed by my rendition of Sally from Tim Burton’s Nightmare Before Christmas and finally The Grinch,” Farah said.

Most of Farah’s special effects makeup ideas came from her but she also takes requests from her followers.