A Ramadan bazaar trader makes ‘murtabak’ at his home during the movement control order in Shah Alam April 15, 2020. — Reuters pic
Follow us on Instagram, subscribe to our Telegram channel and browser alerts for the latest news you need to know.
By TAN MEI ZI

PETALING JAYA, April 5 — Malaysian doctors are calling on food handlers to ensure they are vaccinated against typhoid before the Ramadan month kicks off.

Early prevention is necessary to prevent an outbreak from occurring especially amongst first-time business owners who have turned to home-based cooking or baking to make a living during the Covid-19 pandemic.

In light of this, the Academy of Occupational and Environmental Medicine Malaysia (AOEMM) has partnered with the Facebook group Caring Moms to launch a health education campaign titled “Healthy Food Handlers, Food Safety Assured.”

The campaign will urge homegrown food handlers to practice good hygiene when preparing and delivering food and to maintain public confidence in the safety of their products by getting vaccinated against typhoid. 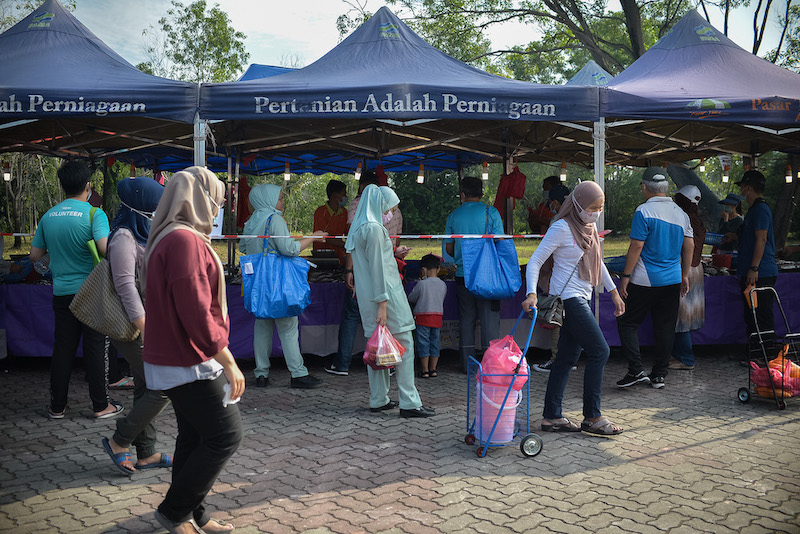 People lining up at a bazaar in Shah Alam March 14, 2021. — Picture by Miera Zulyana

Typhoid, also known as typhoid fever, is a systemic infection that spreads through food and drinks contaminated with the Salmonella Typhi (S. Typhi) bacteria via oral-faecal transmission.

Environmental factors that facilitate the spread of typhoid include poor sanitation, bad hygiene practices, and a lack of access to clean drinking water.

Symptoms include fever, fatigue, headache, nausea, abdominal pain, constipation, diarrhoea and rashes, though 1 to 4 per cent of patients infected with S. Typhi are chronic, asymptomatic carriers.

Asymptomatic carriers can act as reservoirs for S. Typhi bacteria in their intestinal tract and gallbladder for months or years, which means they can spread the disease to others without even being aware of it.

About 10 to 15 per cent of patients infected with S. Typhi develop severe forms of typhoid characterised by persistent high fever, abdominal discomfort, malaise, and headache, and this can lead to life-threatening complications including pneumonia, intestinal bleeding, and intestinal perforation. 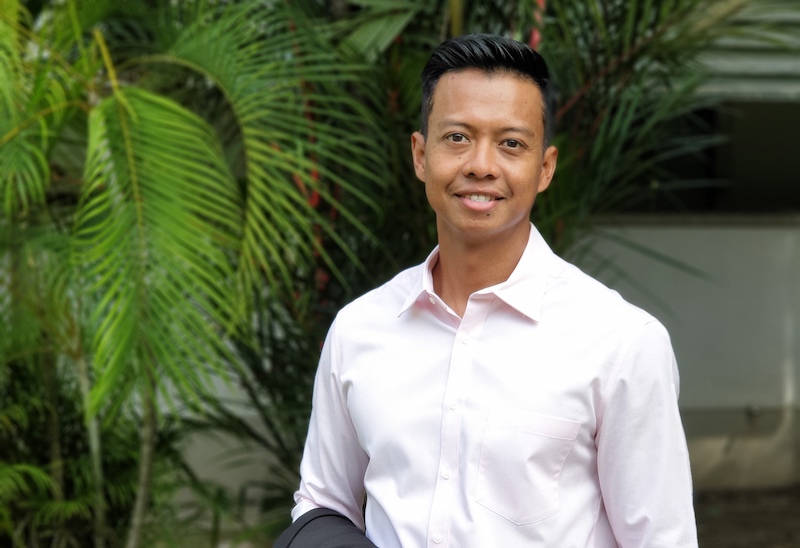 During a Zoom call with journalists, AOEMM honorary secretary Dr Marzuki Isahak said the boom of homegrown food businesses due to the Covid-19 pandemic means it’s more important than ever to spread awareness about the life-saving importance of typhoid vaccinations.

“It is admirable the variety of online homegrown food businesses that have surfaced today but many first-time food handlers may not be aware of the dangers and severity of typhoid disease.

“Whilst it is important that our food handlers are mindful in practising good personal hygiene and sanitation such as the good habit of hand-washing with soap, it is equally critical that they are vaccinated against typhoid,” said Dr Marzuki, who is also an associate professor in the department of social and preventive medicine at the University of Malaya.

According to a 2018 paper from the World Health Organisation (WHO), 11 to 21 million cases of typhoid and 128,000 to 161,000 typhoid deaths occur each year, with a majority of the cases being reported in South Asia, South-east Asia, and sub-Saharan Africa.

Despite rapid urbanisation and development, typhoid outbreaks are known to crop up in Malaysia especially in the Klang Valley where local transmission of typhoid occurs at 78.9 per cent.

Dr Marzuki noted that from August to October in 2015, 71 typhoid cases in Malaysia were found in food handlers who were not vaccinated against the disease.

“Homegrown food handlers must realize that it is their responsibility to protect themselves and their consumers by proactively vaccinating against typhoid, in particular ahead of the month of Ramadan where food bazaars will bring together huge numbers of our population.

“In such an environment, the spread of typhoid could occur if preventative measures are not taken,” Dr Marzuki warned. 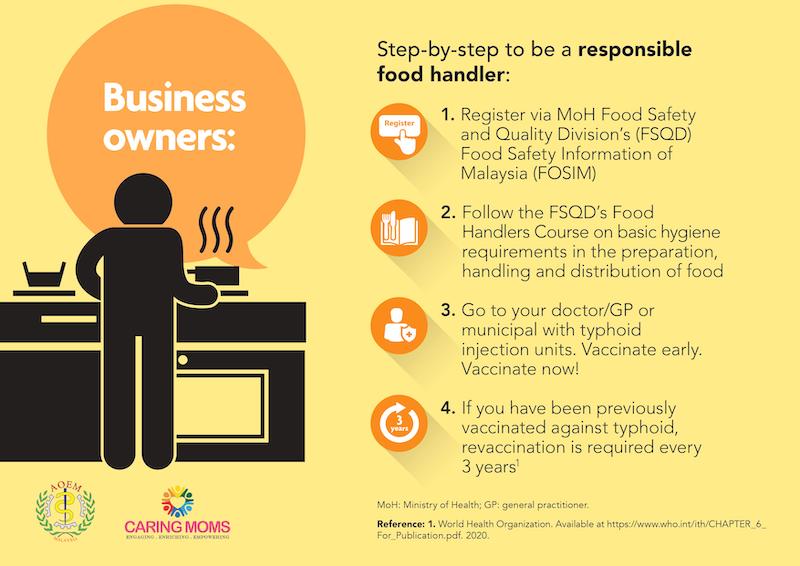 Food handlers should follow these steps to ensure that the meals they prepare are safe to be consumed. — Picture courtesy of AOEMM

“Vaccination against typhoid is a requirement by law for home-based food businesses because it strengthens their customers’ confidence that the food they purchase has been prepared under safe and hygienic terms,” said Dr Anza.

The unconjugated Vi polysaccharide (ViCPS) anti-typhoid vaccine licensed for use has been recommended by WHO since 2008 for the control of typhoid in endemic and epidemic settings.

A single injection ensures active immunisation and protection against typhoid fever in adults and children aged two and above.

Time is of the essence when it comes to vaccinations as it can take up to one to three weeks for immunity to appear after injection.

Hence, food handlers should get vaccinated now if they want to protect themselves and their consumers in time for the Ramadan and Hari Raya celebrations.

Revaccination is then required once every three years. 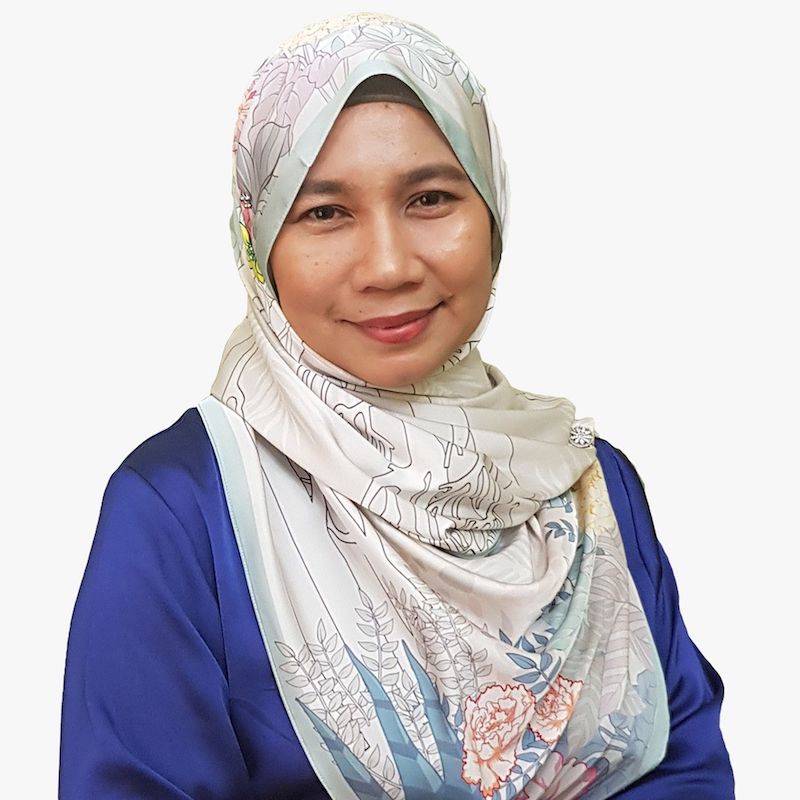 Dr Anza was a public health medicine specialist with the Health Ministry until 2012. — Picture courtesy of AOEMM

Dr Anza added that consumers can play a part in preventing the spread of typhoid as well by choosing not to eat at places that are unclean and practising good hygiene themselves by washing their hands and eating with clean utensils.

She also advised people to be on the lookout for the appearance, smell, and taste of the food they’re eating, and to throw it out if they sense that the meal has gone stale.