PETALING JAYA, April 4 — One benefit of this pandemic lockdown has been the opportunity for catch up on reading and reflection.

The truth should set us free, and herein are three recommended sources for guidance on how to search for these truths created by three courageous voices, often supported by forensic detail, coupled with wit and humour, some easier on the eyes than others — and all through quality engagement, openness and credibility.

The Disappearing Act, The Impossible Case of MH 370
By Florence De Changy

It was the first plane to disappear entirely without explanation since Amelia Earhart in 1939.

The case galvanised the world’s media to a fevered flurry of speculation. Had it been hijacked? Had the captain gone mad and run amok? Had there been a fire on board? Who were the two Iranian passengers with fake Austrian and Italian passports? If the plane had crashed, where was the wreckage?

Florence de Changy is a Far-East correspondent for the French newspaper Le Monde, and she covered the case in detail.

She provides an extremely thorough and approachable example of investigate journalism that tries to unravel the web of investigations, reports, conclusions, fake news and characters surrounding the MH370 flight disappearance (March 8, 2014).

De Changy provides crisp observations, sardonically funny at most times, leaving the reader with a deeper sense of understanding — not about what happened to the plane — but the shenanigans that countries and people engage in to avoid focus on their inability to solve a situation, or indeed to exploit one.

The writing is factually dense, providing quality source for any research on flight mystery — but equally, should be viewed as providing case studies on how adeptly countries, including Malaysia, Australia and the US (seven in total), added to the confusion, anxiety and failure.

If anyone intended that consequence, then such should be considered their expertise, because, she laments, confusion was the name of the game.

Covered in these pages are a dizzying number of evidence visits to more than seven countries, numerous interviews with a myriad of experts, government officials, witnesses, relatives and so on.

She reviews theories relating to the captain, co-pilot, passengers, military operations and so on. She neatly argues that the captain cannot be held responsible for this disappearance.

The expansive, seven countries’ involvement in the search for MH 370, drew out charlatans and opportunists, and alleged witnesses and players who ranged from fishermen to high brow techs.

She tenaciously takes us through various theories and brings us closer to the truth only “by default”, that is, by discrediting most and all theories presented by governments, officials, press and social media.

Her language is pithy and unforgiving — “How many times does a lie have to be repeated for it to become the truth?”

What de Changy does most credibly is to identify possible lies and liars, such that the international community will be hard pressed to trust anything they say anymore.

Her commentary on the prolonged (three years), expensive (£103 million or RM589 million) and multi-national investigation for MH370 unravels mysteries of what could well be historically recorded as a case study for massive ineptitude as well as an "abject failure." No other conclusion has been reached today.

Did we ever imagine that governments could engage and promote rumour mongering, smears and misinformation? If not before, de Changy’s investigation leads us to the darker side and keeps us there with legalistic clarity to expose knowledge and misinformation.

She makes it quite clear with quality evidence whom/what she considers suspect, foolish, unworthy and unbelievable.

The MH 370 mystery remains unsolved, and officially ended January 2017, but any speculation is now better informed through the "truth by default" approach of de Changy’s forensic account.

The takeaway — don’t trust the voices of power just because of their status. Test question, and hold them accountable with alternative sources and independent investigation.

Do not blindly accept anything as the truth. Judge the speaker. Judge the institutions. Judge the message.

“The key to a successful disappearance is diversion; grab the audience’s attention and make them look elsewhere while you execute your sleight of hand.”

De Changy does not use these tricks but rather unveils them credibly, to bring us convincingly to alternative conclusions, for which you too will need to read The Disappearing Act, currently #4 on Amazon UK Best Seller List.

What becomes shockingly and sadly clear is that the international efforts surrounding the disappearance of  MH370, were corrupted by fake news, opportunistic charlatans, and ineptitude — all  adding to the disappointment and grief that already haunts those who suffered great loss.

Justice in the Wilderness
By Tommy Thomas

Tommy Thomas’ claim to fame is as the first Attorney General of Malaysia under a non-Barisan National government, and the first non-Malay AG.

It thus becomes understandable why Thomas, with such a clear and weighty voice, narrates his memoir Justice in the Wilderness (perhaps a more appropriate title would have been Justice & The Wilderness) a safe 12 months after his resignation.

A life story covering early years, touching narrative of family, historical commentary on Malaya and Malaysia, dominated by professional development culminating in his position as  AG; with focus on happenings during his tenure and the lead-up to his resignation.

His written voice is balanced, responsible (a sort of  legal brief for laypersons), and vigorous — offering a fair assessment of matters, in a tone that rings  free of fear and most favour. (He does, however, too often refer to some Malaysian talent as "world class", which left this reader puzzled as to why such description was necessary at all when not used for foreign experts such as Queen's Counsels.)

The information is at once needed for him to excuse his decision to resign ahead of the new government’s entry and to dispel rumours surrounding his tenure and step-down.

There is valuable personal insight and  continuing puzzlement — he repeatedly terms "bizarre" — (yes, even he did not know what was really going on)  into the happenings of the fateful Sheraton Move which has come to signify the realities of political manoeuvring and a compromised democracy.

This book vitally takes us into the important and little understood world of the AG's Chambers, answerable ultimately to the public (though the AG’s contract is with the Malaysian government).

What becomes evident is that even in the AG's chambers, politicking and horse trading are needed skills, with patience, people skills and stamina being pre-requisites for an exceptional Attorney General.

One cannot help but feel that Thomas gave up too early. The AG's  position, as with other government positions, elected or otherwise, ultimately serves the people.

On the brighter side, if Thomas was still AG, we would not have the benefit of his valuable insights, shared for public interest.

Dr Mahathir Mohamad resigned the next day, and a new Perikatan Nasional government was installed on February 29, with Muhyiddin Yassin as the country’s 8th prime minister.

The work, in fact, does not require any appreciation of the 15 depicted characters, but offers understanding to casual and intense gazes alike, addressing the  pivotal reality of the Sheraton Move through a fictional stage set.

No one is looking at each other; no one is talking to each other — though two are on cellphones. Who are they speaking to? What is each of them thinking or doing?

Pictured also are various symbols. A chess set with a real game prompts the question "who is really playing the game? Who will win?’

A treasure chest with label "xoxo JLow"  brings a sad chuckle along with a box of fishing tackle resting under a bottle of worms.

To those familiar with the characters, the scene has layered meanings. But even so, the overarching question remains "What really happened?" 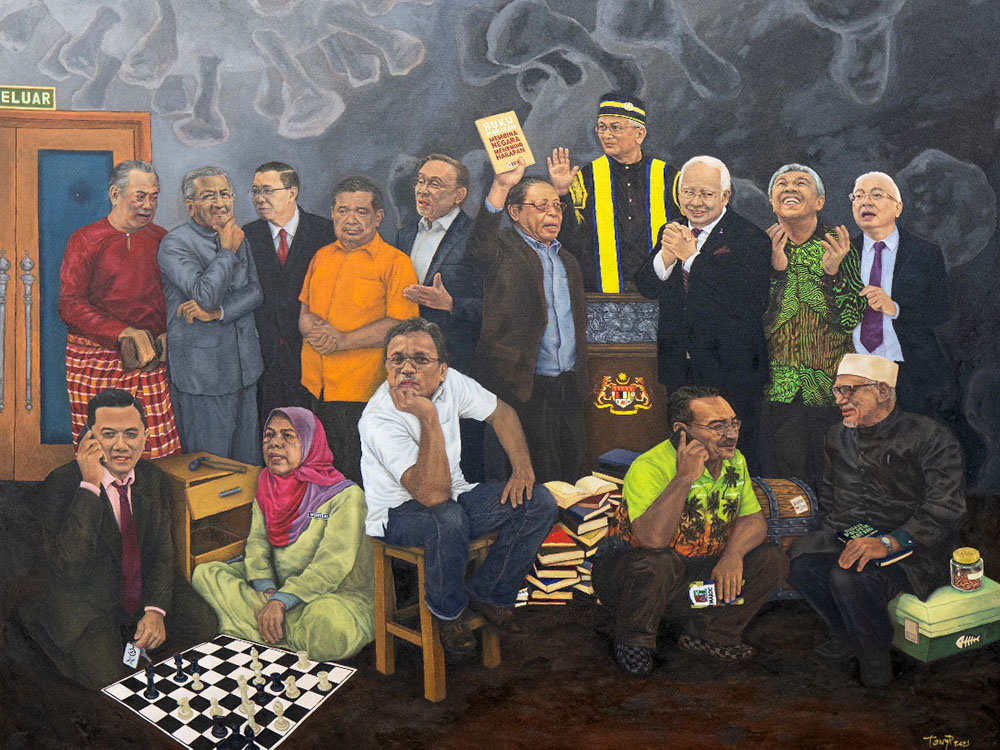 Viewing Langkah Sheraton, this writer was reminded of Jim Croce’s famous ballad, I have to say I love you in a song — adapted imaginatively to echo the creative narrative of  this masterpiece:

Well, I know it's kind of late
I really hope to wake you
There's something that I just gotta paint
Cause words just cannot do it
Cause ev'ry time we tried to tell you
Those disrupters got it wrong
So I have to only ask you
Why? What For? What went wrong?”

These three creative achievements, unveiled during the chaos and calm of pandemic restrictions, ironically offer great freedom of approaches and lessons, singularly and together.

They provide guidance and comfort, accountability and responsibility. Ironically, they offer a degree of hope through the clarity of their making and extended reach.

The general takeaways for local/global, public/private — essentially for everyone:

The truth will set us free and these pandemic gems show that the journey to discovering those truths can be more powerful and enabling than the truths themselves.

And so, the Malaysian story continues with more daring, accountability, responsibility and in the search for and emancipation of ... the truth.

* Datin Shalini Ganendra is an independent scholar, cultural advisor and frequent contributor to local and international publications. She read law at Cambridge University, has an LL.M. from Columbia University Law School and is a qualified Barrister and New York Attorney. She is currently a Visiting Fellow at Oxford University researching image and identity.