Small but powerful: The discreet Pocket Angel produces a mighty 130db siren to draw attention to you and scare off your attacker. — Picture courtesy of Pocket Angel
Follow us on Instagram, subscribe to our Telegram channel and browser alerts for the latest news you need to know.
By MELANIE CHALIL

PETALING JAYA, March 8 — Being a woman, alone and unprepared — the combination of these three things is what Serene Ho’s mother refers to as the recipe for danger.

During her teenage years, she would hear those words whenever she missed her curfew.

“I mean, a girl has got to have some fun right? Why do boys get all the freedom?” said Ho, who is brand manager of Pocket Angel. 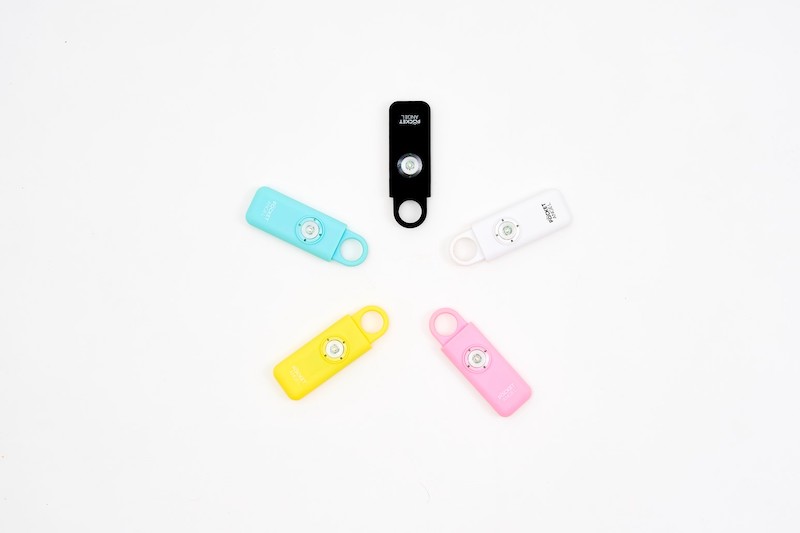 The little device has given women a sense of extra security when they are out alone. — Picture courtesy of Pocket Angel

Pocket Angel is a personal safety device that gives out loud sounds if a woman presses it in situations of danger to alert people.

It wasn’t until she moved to Kuala Lumpur for an internship that horrifying tales of theft and assaults from her female peers made her feel increasingly nervous about walking alone to the train station and car parks, especially with a handbag in tow.

“My mum’s years of cautionary advice finally hit home — I am responsible for my own safety,” she told Malay Mail.

She was also shocked to discover the number of assault and theft cases involving women in Malaysia was on the rise while reported sexual harassment cases doubled in the past decade.

Based on statistics provided by the police, a total of 1,218 reported sexual harassment cases were recorded between 2013 and 2017.

But it is important to bear in mind that half of sexual harassment incidents go unreported and over a third (36 per cent) of Malaysian women have experienced sexual harassment, a YouGov Omnibus research found in 2019.

“How could anyone not worry?” Ho asked.

“There has to be a way for women to feel safer and if we cannot change the part of being a woman and being alone, we definitely can be prepared.”

In her pursuit of ways to safeguard women, the idea of Pocket Angel was born. 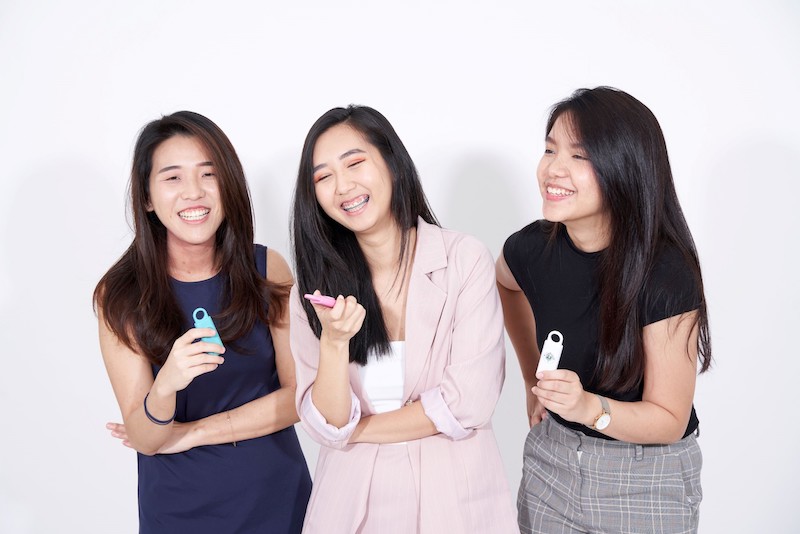 From left: Serene Ho, Peggy Neoh and Kimberly Voon created the personal safety alarm device as a response to the rising cases of violence against women. — Picture courtesy of Pocket Angel

Ho, together with two other women, Peggy Neoh and Kimberly Voon, launched the personal safety alarm in 2020 as a response to the worrying threats that women have to face in their daily lives.

Small but powerful, the Pocket Angel produces a mighty 130db siren — that’s as loud as three Myvis honking at the same time — and a flashing strobe-light when activated to draw attention to its user and scare off an attacker.

The discreet and stylish device that comes in a variety of fun colours offers women a sense of security whether they are out for an evening jog or running errands.

It retails for RM49.

“We have received countless reviews on our website on how the little device has given them an extra sense of security when they are out alone, carrying out their daily lives.

“We hope customers will never have to ever use them in any situation, but should anything happen, Pocket Angel promises to provide the additional help they need.

“A little device like this, goes a long way,” said Ho.

They might have sold more than 10,000 units in the span of five months since launching in October 2020 but the women at Pocket Angel want to do more.

Ho, Neoh and Voon are committed to changing mindsets when it comes to gender-based crimes, including dismantling dangerous attitudes such as victim-blaming.

Which is why they emphasise important educational statements such as “it’s never the victim’s fault” and “the way we dress does not mean yes” on their social media platforms.

“We strongly believe that women have the right to feel safe and the freedom to express themselves without feeling threatened by sexual harassment and assaults.

“The root cause of these problems is never the victim, but the abusers.

“Yet, we witness in the culture around us or within ourselves that the tendency to victim-blame is ever-present. This, we believe, has to be stopped,” said Ho.

#ChooseToSpeakUp about your sexual assault

In conjunction with International Women’s Day, Pocket Angel has launched the #ChooseToSpeakUp campaign to highlight the importance of personal safety and to encourage women to speak up about their sexual assault and harassment experiences. 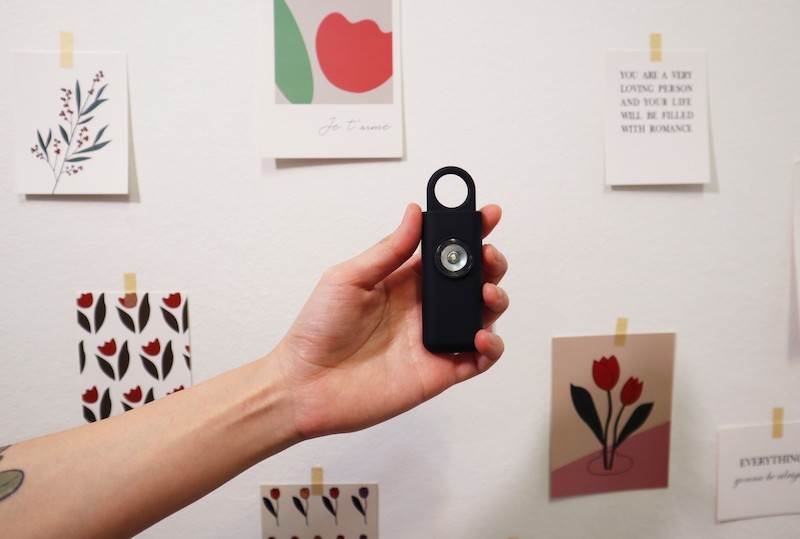 In conjunction with International Women’s Day, the Malaysian company is encouraging women to speak up about their sexual assault experiences. — Picture courtesy of Pocket Angel

By creating a safe sharing space, the team believes women are able to draw strength and support from each other.

“During the campaign, there will be a dedicated section on the webpage for visitors to submit their stories, anonymously if they wish, on our website to raise awareness on the topic of sexual harassment,” Ho told Malay Mail.

She said the campaign, which features three Malaysian personalities — fitness guru Siu Lim, singer-songwriter Talitha Tan and teacher Tharsyani Nair — is one way of encouraging women to speak up against sexual harassment and violence.

“Admittedly, this topic is considered taboo in our Asian, narrow-minded society.

“Nevertheless, we are determined to make a change by partnering up with local women organisations moving forward should the opportunity arise and to organise similar campaigns to raise greater awareness,” added Ho.

Pocket Angel chose to partner up with the Women’s Aid Organisation (WAO) to raise awareness of the non-governmental organisation’s work and services such as their crisis helpline as part of the #ChooseToSpeakUp campaign.

Partial proceeds from Pocket Angels sold in March will also be channelled to WAO to help them continue supporting abused women and children. 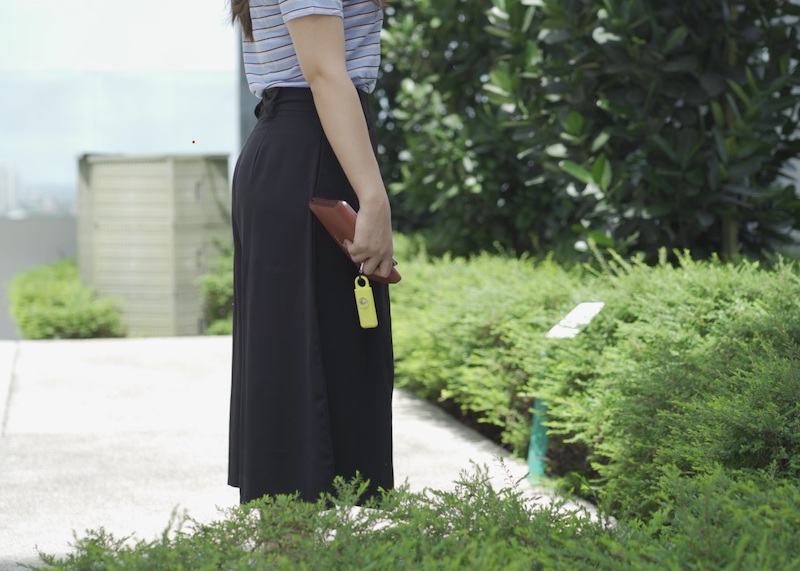 Pocket Angel brand manager Serene Ho said topics of sexual harassment and violence against women are taboo in places like Asia and the company wants to change that. — Picture courtesy of Pocket Angel