The billboard was pushed into the spotlight amid Black Lives Matter protests happening in the United States. — Picture from Twitter/lisajariffin
Follow us on Instagram, subscribe to our Telegram channel and browser alerts for the latest news you need to know.
By TAN MEI ZI

PETALING JAYA, June 10 — A petition has been launched demanding the removal of a controversial billboard showing Limkokwing University founder Tan Sri Lim Kok Wing as the “King of Africa.”

The billboard shows a digital illustration of Lim standing with a cheetah on the left and a photo of him surrounded by students in Sierra Leone on the right.

Could there be anything more self-aggrandising, politically grotesque & tone-deaf from an institution purportedly abt higher education? If we want to bring our higher education sector into global disrepute this is perhaps a good 1st step. Thank you @Limkokwing_MY #ThinkingMatters pic.twitter.com/dhRBqAbBHk

Sam Chin kickstarted the petition “LIM KOK WING UNIVERSITY'S CONDESCENDING BILLBOARD NEEDS TO BE TAKEN DOWN” on Change.org and said that portraying Lim as a “saviour” is condescending and robs African students of their agency to pave their own way in the world.

“The use of a jungle animal and reference to ‘king’ perpetuates ideas of Africa as one big jungle and adds to the (wrongful) animalistic characterisation of the students.

“This perpetuates the notion that black people need saving, taking away their power and psychologically placing them in an inferior role,” Chin wrote on the petition page. The petition was launched on June 7 after pictures of the billboard made the rounds on social media. — Screengrab from Change.org

Social media users have also pointed out that the photo of Lim surrounded by students in Sierra Leone has been edited to make the crowd appear larger and more packed than it actually was.

“This paints a picture of these students lacking individuality perpetuating the notion that all black people are the same.

“The use of the photo of his students in Sierra Leone pressing up against him is a common photo used by the media to portray black people as 'savage' and 'animalistic.'

“This may not have been his intention; however, I implore you to consider the implications of using photos like this knowing the current climate of the world and its views on people of African descent,” Chin continued.

Chin added that Limkokwing University needs to do more to protect its African students from discrimination and injustice, especially after one of their PhD students Thomas Orhions Ewansiha from Nigeria died in police custody in 2019.

The petition has garnered more than 2,500 signatures as of this afternoon and Universiti Malaya Faculty of Medicine dean Prof Datuk Dr Adeeba Kamarulzaman has added her name to the list as well.

Limkokwing University has since responded to posts on Twitter stating that they have removed the billboard and regretted any “misunderstandings.” 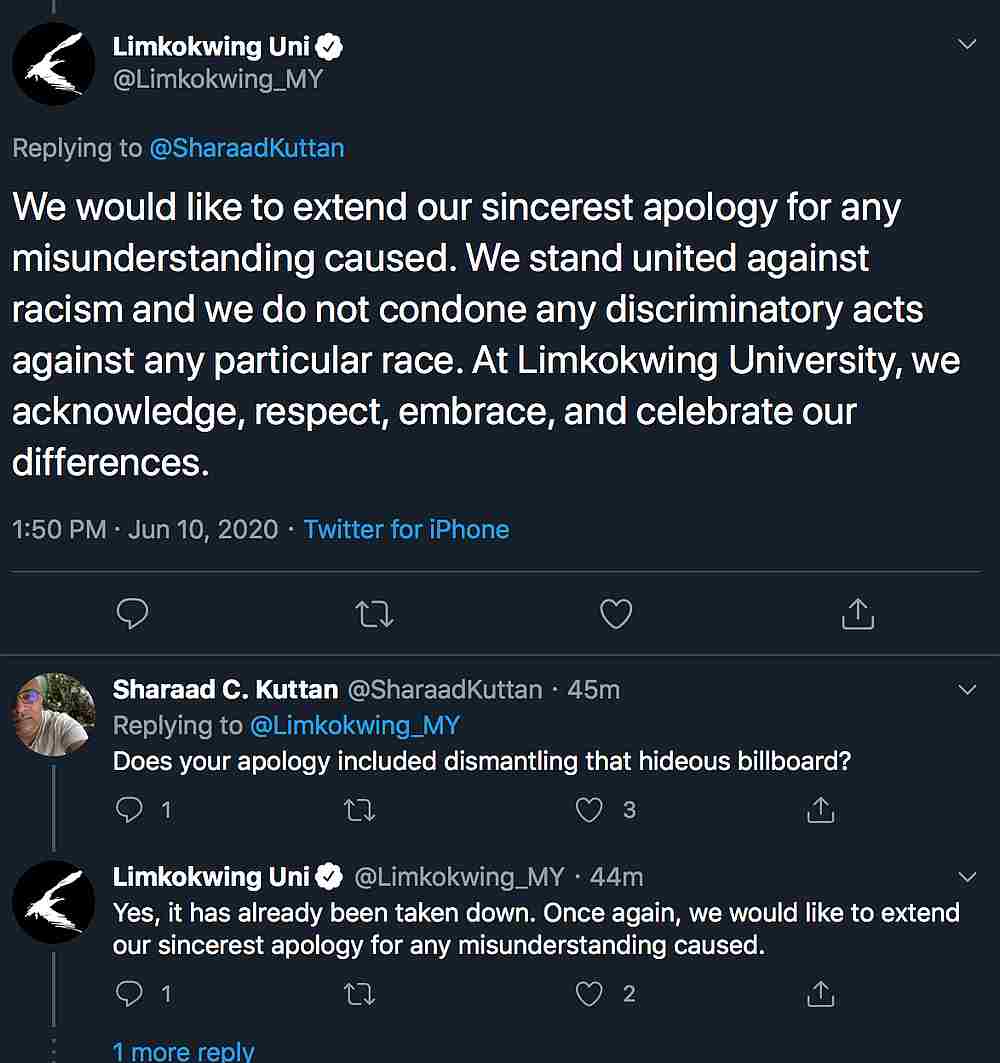 The billboard has since been removed by the university who also issued an apology to Twitter users who tagged them online. — Picture from Twitter/ Limkokwing_MY

“We would like to extend our sincerest apology for any misunderstanding caused.

“We stand united against racism and we do not condone any discriminatory acts against any particular race.

“At Limkokwing University, we acknowledge, respect, embrace, and celebrate our differences,” they wrote.