PETALING JAYA, March 19 — The implementation of the restricted movement order has left the most vulnerable in the homeless and street communities in a lurch as soup kitchen operators are not spared shutdown orders with the Covid-19 outbreak.

While many have had to temporarily suspend services, some have chosen to bravely soldier on to feed the needy by adopting a grab-and-go system to minimise social contact following Monday’s announcement.

Soup kitchens play a crucial role in providing sustenance to the less fortunate, serving as a lifeline for the homeless and urban poor who would otherwise starve.

Like many soup kitchens, Kechara Soup Kitchen is not certain if it is allowed to operate, saying information is insufficient and guidelines are not specific enough.

As a result, it has stopped distributing hot meals to street clients through its mobile kitchen van.

“We are not entirely sure — the ones who are suffering are people on the streets, so we are in limbo as well.

“We’re not sure if we can continue operating and at the same time don’t want to compromise the health of our volunteers,” Kechara project director Justin Cheah told Malay Mail.

Kechara also runs a food bank but services are currently halted due to the shutdown.

Many of Kechara’s regulars who rely on the soup kitchen for their next meal are worried but they are making do with what they can get.

“We are dealing with people who have already given up but they also need information.

“We understand that this is a time of uncertainty but please do not forget the poor and homeless,” Cheah said.

Feeding the Needy (FTN) have also decided to suspend operations to comply with the government’s directive.

Like Kechara, FTN chairman Ave Hashim said no information was available for soup kitchen operators and those who rely on their services when the shutdown was announced.

“There was no detailed information given and there are no options given to the soup kitchen since we are providing food for the needy,” she told Malay Mail.

With soup kitchens halting operations, Ave said she isn’t sure of where the poor and homeless will be getting their food from.

“They are anxious but they told us that hopefully there will be random feeders that will provide some meals for them,” Ave said.

She said when the movement restriction order was announced, FTN decided to scale down its food distribution as a precautionary step to minimise social contact with the public.

They have also stopped taking on volunteers.

“Right after the announcement we decided to cease operations.

“Most of the team were shocked but we can’t do much as it was an order by the government,” she said.

The two soup kitchens began preparing for a possible lockdown as early as last week.

Pit Stop Community Café at Jalan Tun HS Lee test ran its new approach to operations on Monday to replace its usual dine-in concept that allowed the street community to have a meal in their premises.

There will be a minimal number of volunteers and gloves and masks are compulsory during food distribution.

“In situations like this, it’s always the poor and the hungry, the elderly and disadvantaged that get hit the worst.

“Imagine if you have no food and no clean water.

“We need to run, we’re essential services — food is essential,” she said.

Lee added that this vulnerable group of Malaysians rely on the likes of Pit Stop, Pertiwi and Kechara for food and a sense of belonging.

“To know that they are still human, still worthy of care and consideration,” Lee said. 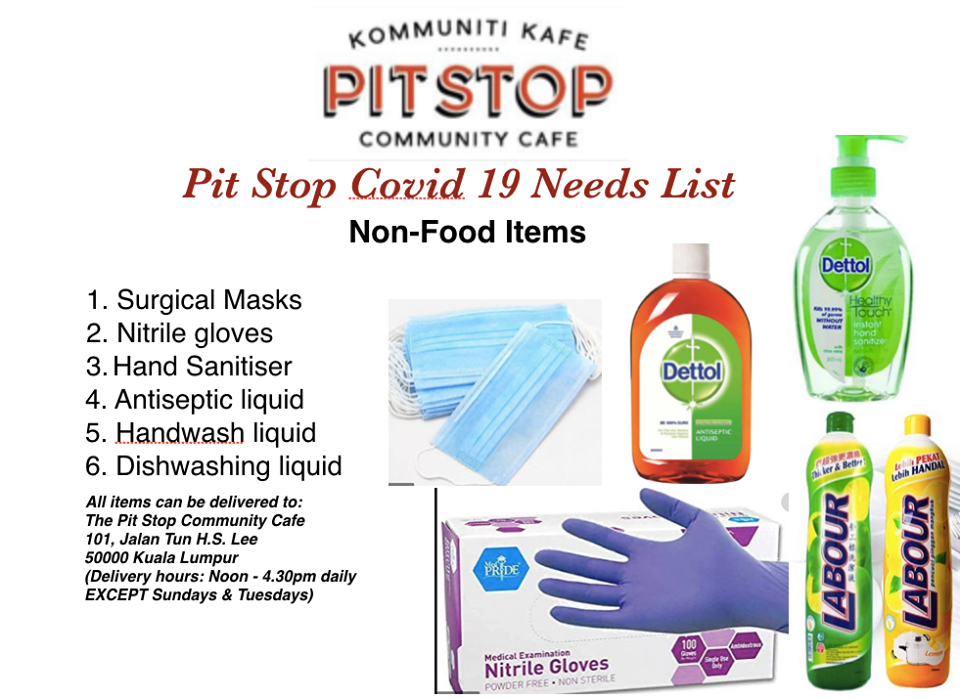 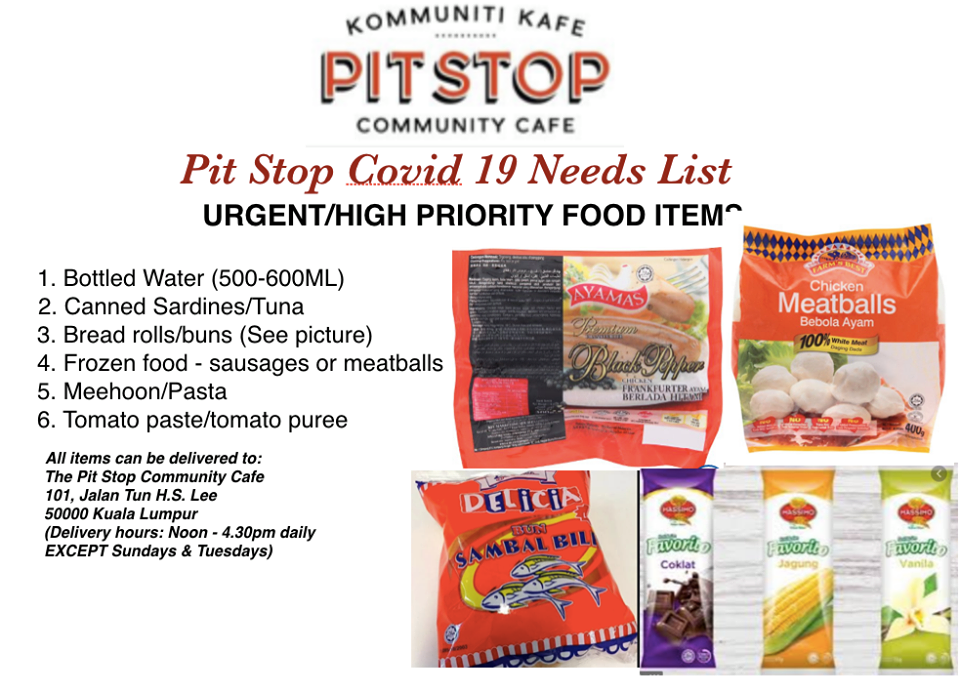 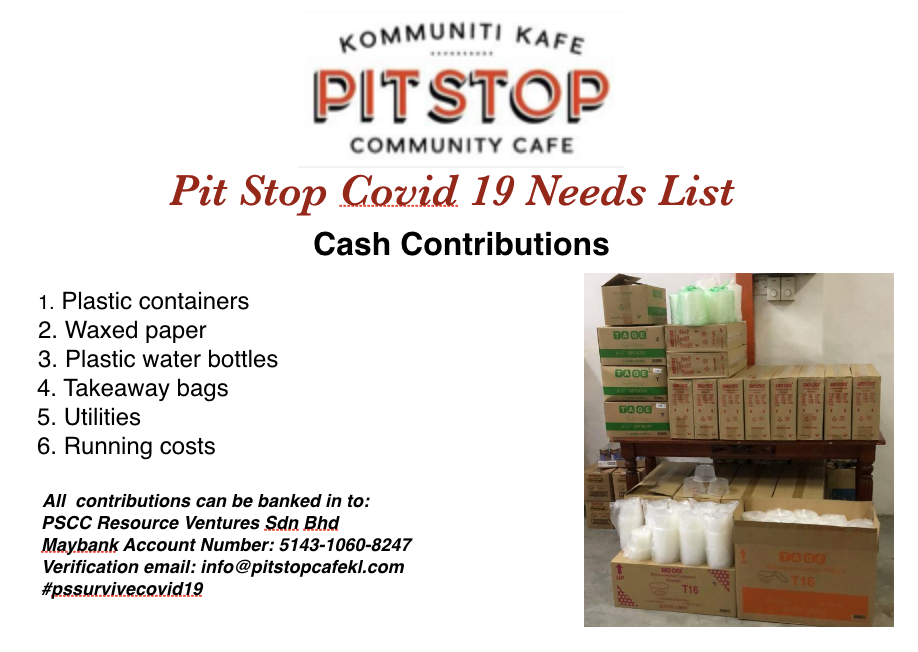 Pertiwi Soup Kitchen founder Datuk Munirah Abdul Hamid said her charity started making changes to its usual operations since last Friday where gathering in groups and huddling together were prohibited.

Munirah and Pertiwi volunteers have to ensure social distancing is maintained and that gloves are worn and hands are sanitised.

There are currently six volunteers to reduce the number of people in the area.

Prepacked food is laid out and patrons are instructed to collect their food and go back to their quarters.

The community at Medan Tuanku in Kuala Lumpur are also monitored, constantly being told to keep a distance from each other.

“I’m like a grandmother telling everyone to stand far apart and go back after collecting the meals.

“If we don’t do this, no one will remind them,” she added.

In that respect, soup kitchens play a vital role during the Covid-19 crisis in assisting underprivileged communities not only with meals but as a source of information and awareness.

Some of the low-income earners have lost their jobs at budget hotels, security companies and restaurants following the movement restriction order which was implemented to contain the Covid-19 outbreak.

“Tuesday was the last day of work for some of them. Not all have cooking facilities at home,” Munirah said.

To maintain Pertiwi’s highly controlled new system, she said it was important to not have ad hoc groups turning up en masse to maintain social distancing protocol.

The other kink Munirah has to iron out is making sure there is clean drinking water for the community since the refilling of water bottles from designated water coolers have been discontinued as a safety precaution.

“That is still something I don’t know how to solve. If we give out bottled water, environmental groups will make noise,” she said.

Pertiwi is also not keen on the idea of packet drinks because of the sugar content and hopes DBKL can come up with a solution to provide the poor and homeless with clean drinking water.

“It’s a critical time for everybody.

“The homeless and hardcore poor face so many hardships — this is just another one,” said Munirah.