GEORGE TOWN, March 5 — The story of the Malayan tiger is one that is rarely told and despite the government’s Save Our Malayan Tiger campaign, many Malaysians have very little interest in the fate of these majestic creatures.

Artist and curator Ivan Gabriel, who was given the Tiger Hero award by The Malayan Tiger Project, wants to change that and this is what sparked the idea for "BELANG: Save our Malayan Tiger Campaign."

He said the idea for the art exhibition focusing on the Malayan tiger started with a few tiger artworks he had collected and wanted to donate for fund-raising when he was given the award last year.

The idea grew and it became a bigger project to highlight the Malayan tiger through the eyes of 75 different artists, most of whom are Malaysians. 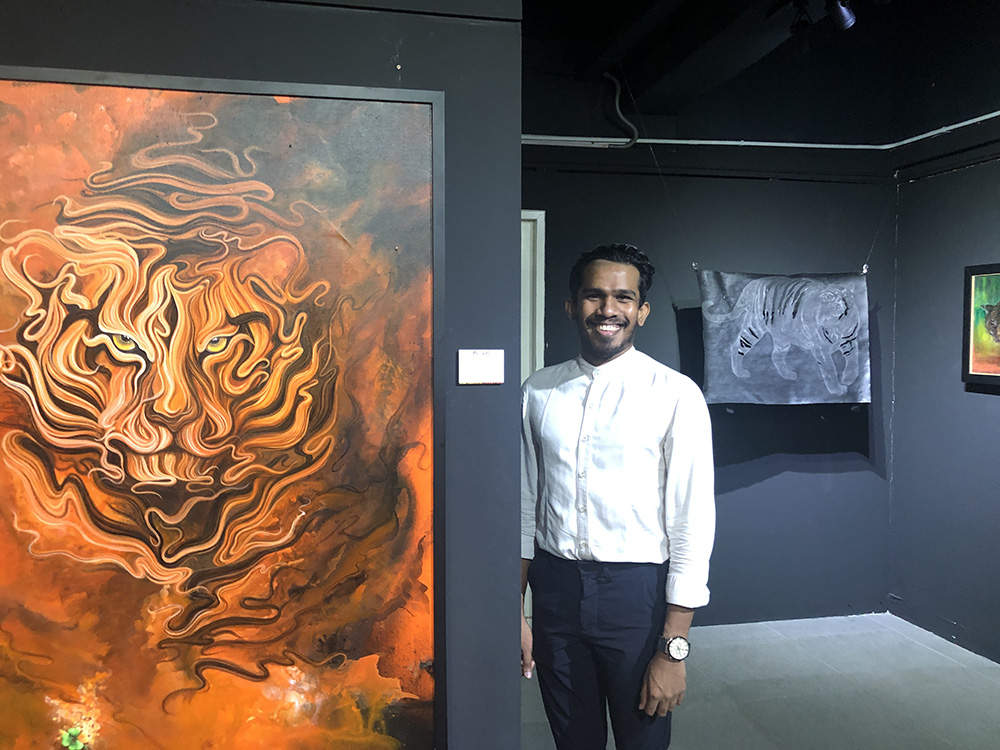 'BELANG' exhibition curator Ivan Gabriel wants to tell the story of the Malayan tigers in the exhibition. — Picture by Opalyn Mok

He said awareness about the dwindling number of Malayan tigers is poor and there is a need to get the message across to the public.

"In another project I was working on, I talked to many people and asked them what they think about Malayan tigers and one woman's reply really struck me because she asked, 'We have Malayan tigers?'," he said.

He said creating awareness is the first step in order to empower the public about the importance of protecting the endangered Malayan tigers.

The exhibition is not only a showcase of paintings and mixed media artworks on the Malayan tiger but a narrative on the plight of the tiger. 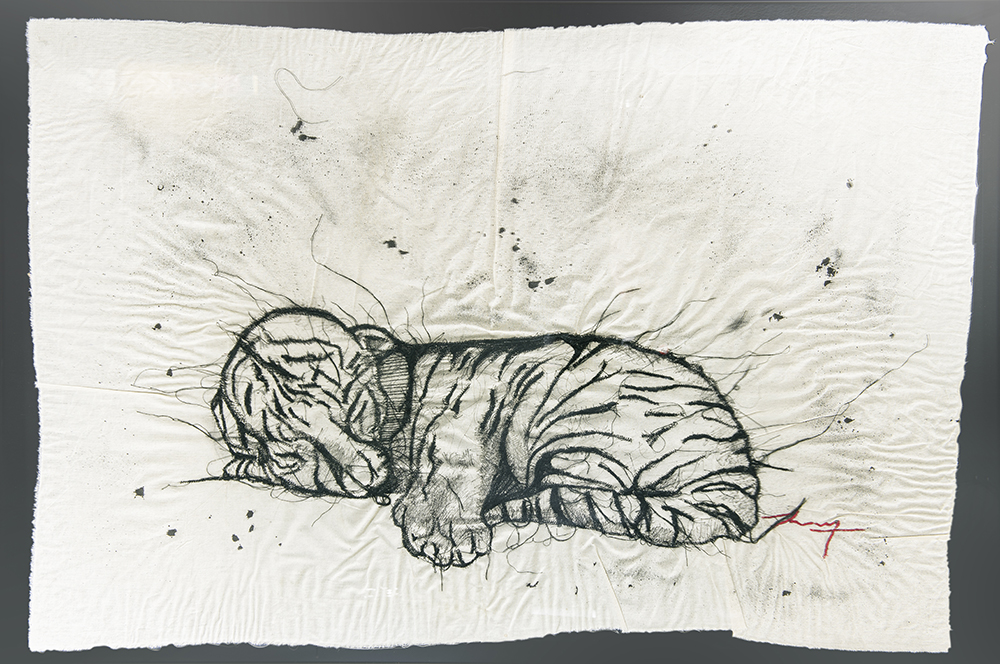 It starts with Mimpi Indah by Izzardzafli Padzil, an adorable image of a newborn tiger cub in ink and stitches on calico.

The birth of the tiger and images of the cubs and their mothers take up the first section of the exhibit, showing the world how cute and loving tigers can be.

The exhibition then moves on to young tigers and their playfulness and then the adult stage where they are portrayed as strong, beautiful, majestic even. 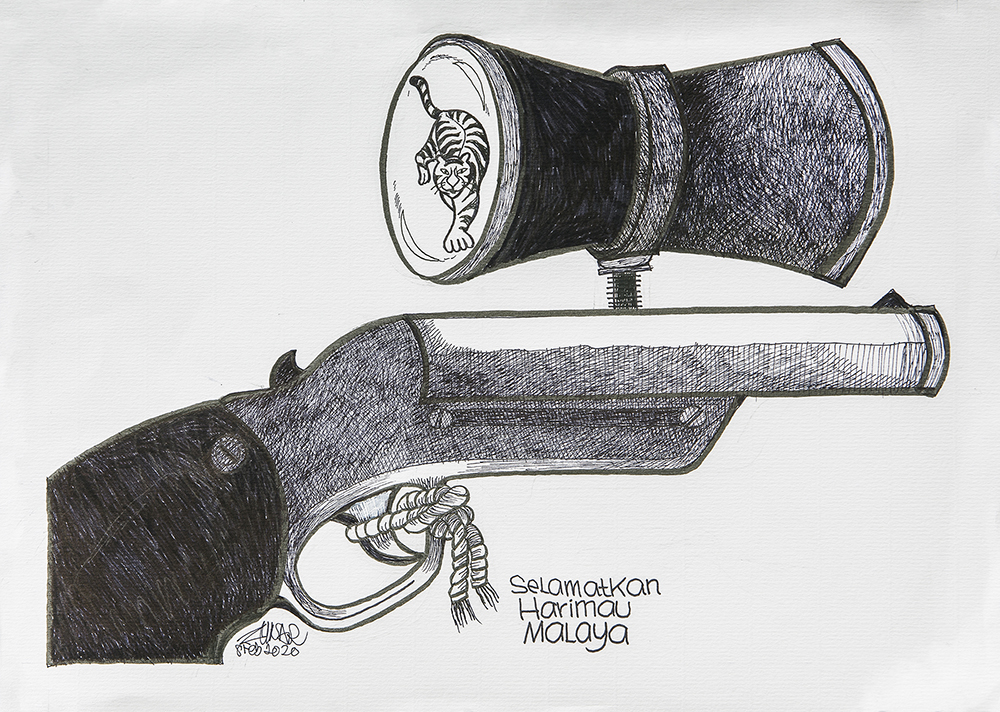 Then comes the poignant stage; cartoonist Zunar captured it well with a drawing of a gun, a tiger reflected in its viewfinder, the trigger tied with a knotted rope while the words "Selamatkan Harimau Malaya" next to it tells the message.

Ivan said that section, consisting of black and white images of tigers, is the mourning stage depicting the tiger's plight of being illegally hunted, killed or displaced by development leading to their near-extinction.

This is immediately followed by bright colourful pieces of the tiger in an adaptation and evolution stage, a dreamy look at what happens if Malayan tigers really go extinct.

The exhibition ends with pieces that evoke emotions, particularly shock, on Man's disregard for these majestic creatures for the sake of fashion or concoctions containing tiger parts that supposedly have medicinal qualities.

'What a price to pay' by Esther Geh and Tina Lee DeGreef. — Picture courtesy of Vincent Lim

A collaborative mixed media work by Esther Geh and Tina Lee DeGreef, titled "What a price to pay" really hits home with what appears to be the skin of a tiger cub splayed on canvas with holes cut out of it and the cut outs used in a fashionable necklace.

The exhibition will be officially launched this Sunday (March 8) with a host of events, starting from 9am till 5pm. 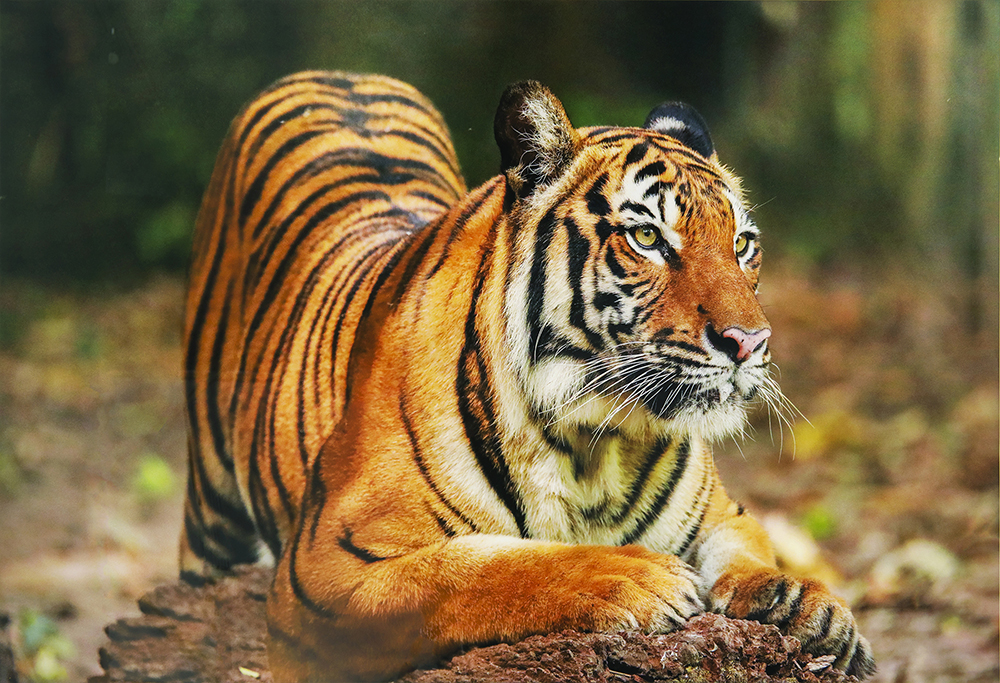 There will also be a conservation talk on "Belang & Petualang" by Perhilitan at 2.30pm on Saturday (March 7).

Ivan will be conducting a guided tour and curatorial walkthrough on March 21 at 10.30am while some participating artists will also be present to talk about the artworks.

He said 25 per cent of the proceeds from the sale of the artworks in the exhibition will go towards conservation efforts.

The exhibition is until March 31 and is free.