Abdi’s plight was made known to PichaEats co-founder Suzanne Ling when his dad applied to work as a chef with the social enterprise. — Picture courtesy of PichaEats
Follow us on Instagram, subscribe to our Telegram channel and browser alerts for the latest news you need to know.
By TAN MEI ZI

PETALING JAYA, Feb 5 — Little Abdi is only two years old but his life has been anything but easy.

The toddler is currently suffering from liver failure and requires RM300,000 for an urgent organ transplant procedure.

Without the surgery, Abdi’s doctor estimates that he only has six months left to live.

Upon hearing of the child’s plight, social enterprise PichaEats and crowdfunding platform Simply Giving joined hands to seek out donations from kind Malaysians.

PichaEats co-founder Suzanne Ling got to know Abdi when his father decided to apply as a chef at PichaEats to support his family.

It was during a visit to their home for a food-tasting session that Ling found out about Abdi’s life-threatening health condition.

“We saw this cute little boy playing with his toys and something was off about him. He was breathing heavily, we could hear his phlegm in each breath, he was thin but his stomach was bloated, and his eyes were yellow in colour.

“They told us, Abdi has liver failure. He is surviving on medication now and the only way he can make it is if he gets a liver transplant,” Ling wrote on Facebook. Social activist Syed Azmi Alhabshi (in grey) has also been lending a hand to help the fundraising campaign for Abdi to reach its goal. — Picture courtesy of PichaEats

Abdi and his parents fled to Malaysia from war-torn Somalia in 2018 and he initially didn’t qualify for a liver transplant due to his status as a non-Malaysian.

Ling then contacted Yayasan Chow Kit founder Dr Hartini Zainudin who managed to find a doctor who can perform the life-saving surgery for Abdi.

They hope to give Abdi a second chance to grow up through their fundraising campaign, which has raised more than RM61,000 so far thanks to over 70 donors from Malaysia and abroad.

They are currently seeking donations to meet the RM300,000 target goal as soon as possible.

Abdi’s family is currently applying for emergency resettlement with the United Nations High Commission for Refugees (UNHCR) and if successful, his liver transplant surgery will be done overseas.

Should the application fail to be approved in time, Abdi’s surgery will take place in Malaysia at Universiti Malaya Medical Centre (UMMC).

Dr Hartini had previously tried to help a refugee child who suffered from the same condition as Abdi but the youth unfortunately passed away due to the long waiting period for the resettlement application to be approved.

Ling told Malay Mail that funds are being raised for both Abdi’s emergency resettlement and a local liver transplant procedure to prevent a similar tragedy from occurring.

To chip in, visit the Simply Giving fundraiser page for Abdi. Alternatively, you can donate via bank transfer or deposit using the details below. 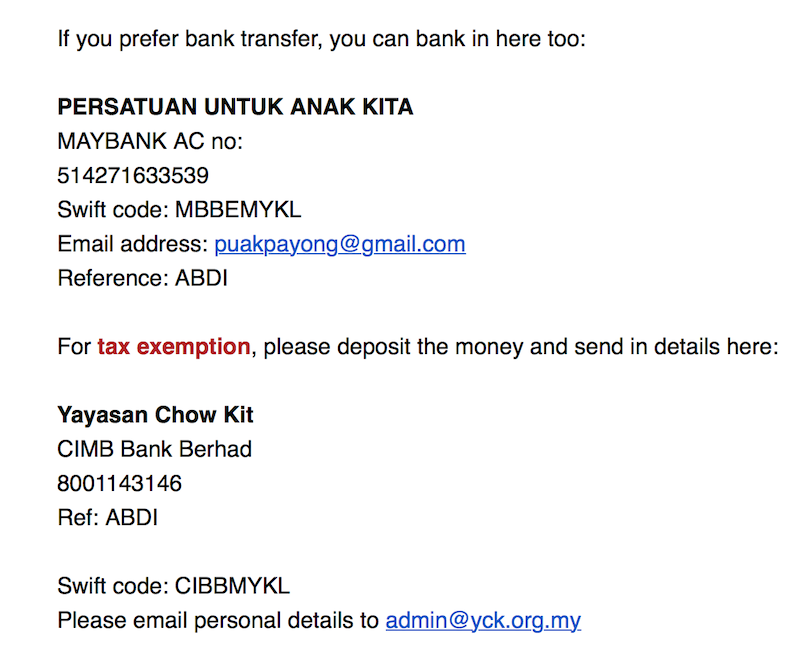 You can also donate via bank transfer or deposit using the information above. — Picture courtesy of PichaEats