The chimpanzee expert says we need the environment for ourselves. — Picture by Hari Anggara
Follow us on Instagram, subscribe to our Telegram channel and browser alerts for the latest news you need to know.
By MELANIE CHALIL

Five endangered elephants have been found dead in just the span of two months.

Such headlines often render many feeling powerless in the fight to save the planet’s accelerating rate of disappearing wildlife as their homes in forests become scarce, driven by human activity.

Couple this with the effects of climate change, its impact of human life and the lack of priority by policymakers, it’s unsurprising that terms such as "eco-anxiety" have been coined.

“How do people stay positive and hopeful in the face of this onslaught on the natural world? It’s really difficult,” said Jane Goodall, the world-renowned primatologist during a media question and answer session yesterday.

The 85-year-old is known for her long-term study of wild chimpanzees in Tanzania during the ‘60s.

These days, the British chimpanzee expert and conservationist spends 300 days a year travelling around the world to speak on animal welfare issues, environmental protection and the power of young people to make an impact.

Goodall was on her third visit to Malaysia for the Roots & Shoots Malaysia Award 2019 where 36 youths were honoured for their conservation activities.

Goodall urged young people to continue working to change the mindsets of their parents and grandparents as well as involve their friends and family in the conversation and efforts when it comes to the environment.

“It’s just really important to try and get young people some hope if they all take action and if they don’t give up,” she said. 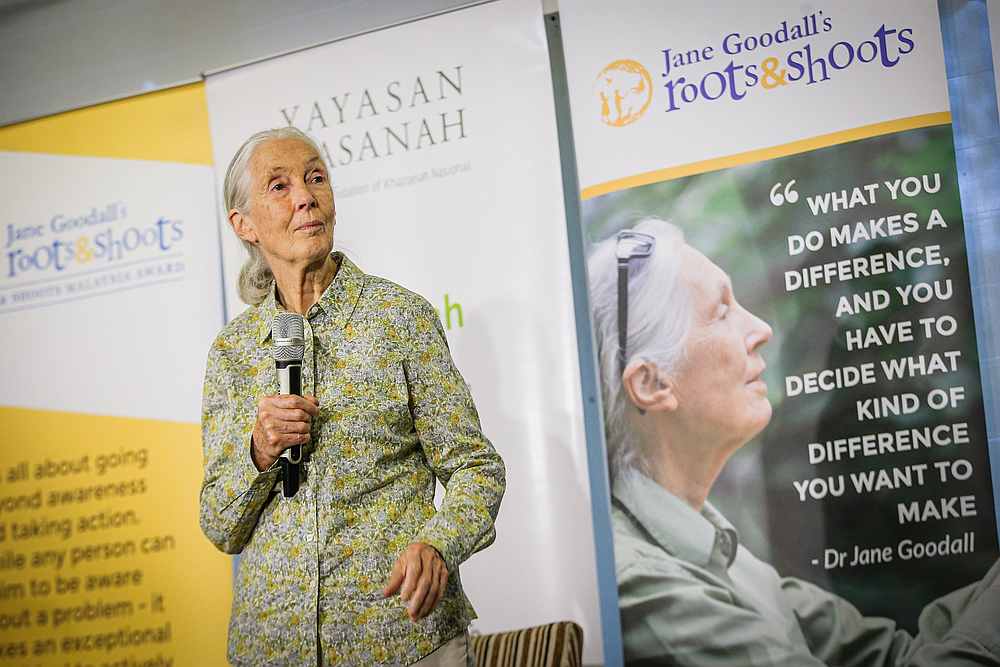 For now, she said, all we can do is hope that combined efforts will result in the protection of these endangered animals.

“I mean we are in the middle of the sixth great extinction so somehow we have to help people to understand that we need the environment for ourselves,” said the United Nations Messenger of Peace.

“We need the ecosystem. We are part of it and as we destroy it. We are destroying the future for our own children.

“We’ve got to get that message across that we actually need the natural world and try to help people understand what we face if we continue to destroy it,” she said.

During the session, Goodall was asked about her thoughts on sustainable palm oil.

In 2015 on her first visit to Malaysia, she attended a roundtable on the topic of sustainable palm oil and was told it was difficult to assure everyone that it is “really sustainable.”

As a result, she sent out a message to stop the further destruction of old forests and remove new crops on old forests.

“Let the old forests come back which it will if it hasn’t been destroyed for too long.”

Goodall also urged to put an end to forest burning which kills orangutan and gibbons.

“We’re so arrogant. How do we dare to say just because we want palm oil, we are going to destroy the whole world for this orangutan family and very often some of the local people too are driven away,” said Goodall.