Tan with his two loving dogs. — Picture courtesy of Louis Tan
Follow us on Instagram, subscribe to our Telegram channel and browser alerts for the latest news you need to know.
By MARK RYAN RAJ

PETALING JAYA, Oct 17 — Louis Tan decided to make his own instead of forking out the big bucks for imported kibble after seeing his own dog suffer from skin issues, due to low-quality dog food.

His late pooch Kelly, suffered from a variety of skin issues which required him to get costly hypoallergenic foods from overseas, which however did not improve Kelly’s condition.

Being no stranger to start-ups, from his experience previously as part of start-ups in America where he lived for seven years with the likes of ShopandBox and The Luxe Nomad, Tan decided that it was time to make his own dog food for Kelly instead.

“I opted for import foods from Australia, New Zealand and Canada, and paid as much as RM150 per kilogramme,” said Tan.

He was unquestionably infuriated at the quality of the food and wasn’t too happy either that Malaysia does not have quality dog food companies.

So instead of paying audacious prices for low-quality food, to make some foreign company rich, he chose to make his own and start-up his own brand of dog food, called PledgeCare. 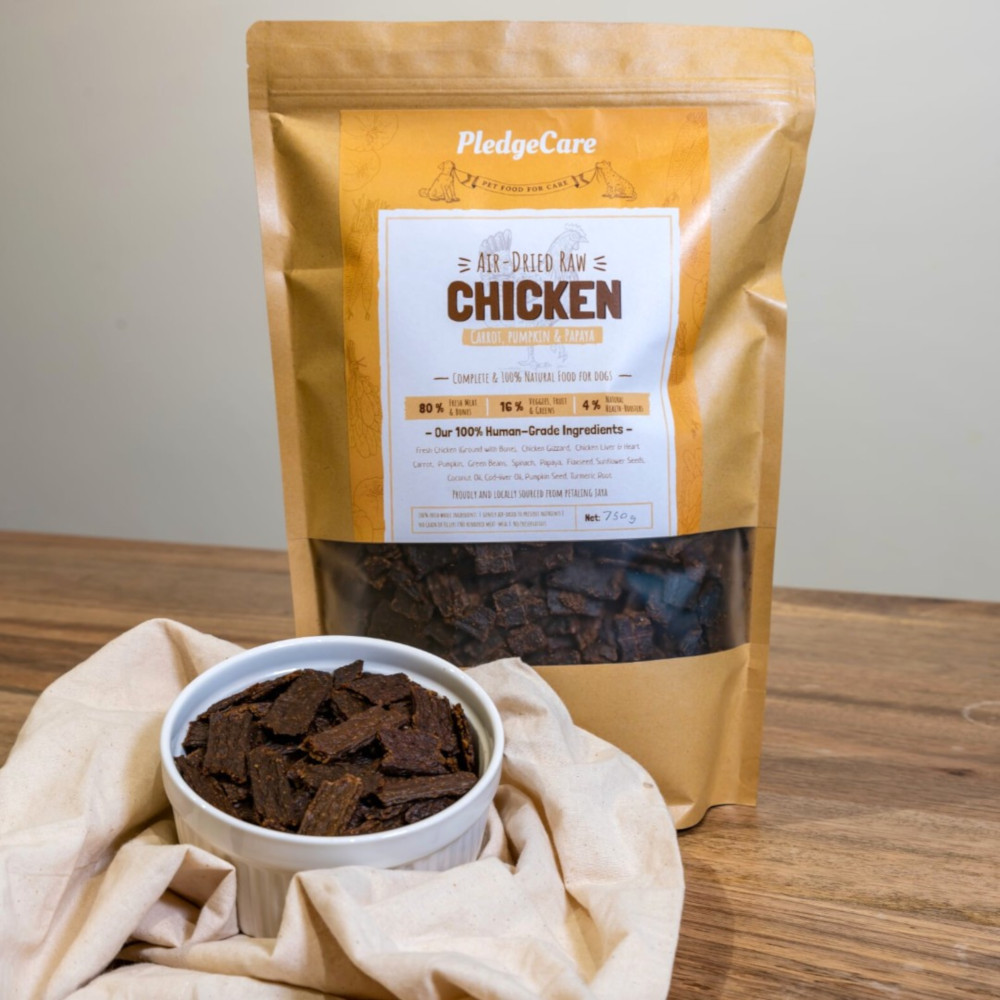 PledgeCare’s Air-Dried Chicken dog food, which is made from 100 per cent human-grade ingredients. — Picture via Facebook/PledgeCare

“The quality of our food is unmatched, it’s human-grade and we price it much cheaper than premium import kibble,” said Tan.

He added that all of PledgeCare’s food is made 100 per cent from fresh meat and produce sourced from local markets and is safely air-dried for 24 hours after it is made.

“This enables pet parents to feed their pets with the same fantastic nutrition as raw, home-cooked food, but without the fear of pathogens like salmonella,” he said.

“It is heartwarming to hear people tell us that our food has solved their pet’s skin problems, and we’ve heard that many, many times.”

PledgeCare’s products include, duck and chicken air-dried meals, priced at RM75 and RM67, as well as an assortment of air-dried treats, priced at RM20, like chicken strips, lamb liver, whole anchovies, beef liver and duck gizzard. 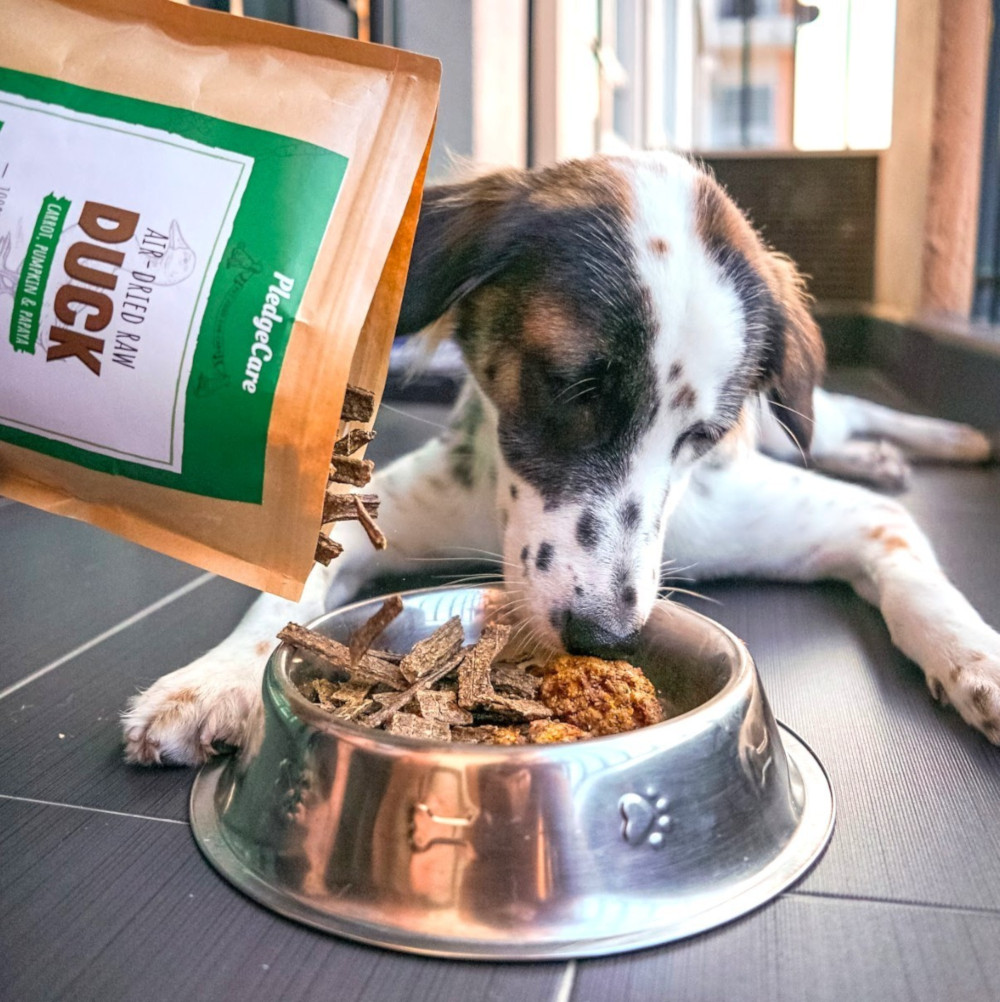 One of PledgeCare’s customers can’t wait to dig into the delicious homemade meal. — Picture via Facebook/PledgeCare

In spite of his company’s newfound success, Tan isn’t doing it for the profit, as his main goal for PledgeCare is to perfect his products and help out animal welfare groups.

That’s mainly because he was so impressed by the care and professionalism of canine initiatives and organisations in the country like Malaysian Dogs Deserve Better (MDDB), when he wanted to adopt a dog upon coming back from the US.

“They interviewed me and did a site visit at my home, to see if we were genuine adopters,” said Tan.

“I was immediately impressed as it was a similar experience to when I adopted a dog in the US.”

After that encounter, Tan did some research and found out that the altruistic people working in these organisations go through a lot of trouble to raise funds and keep their centres running. MDDB’s Patch is mascot of the event. — Picture courtesy of MDDB

“For all the good they do, these selfless people can barely get by, let alone operate an organisation,” he said.

“I realised that I can do much more than donating regularly, and that building a social enterprise to sustain non-profitable and charity industries would be extremely impactful.”

“I want to be the leading contributor and donator to animal causes in the country, and hope to double the size of contributions made.

“I want to reward the real heroes of animal welfare, the founders, vets, volunteers and people at ground level, so that they have the resources to keep doing their work, without having to worry about making ends meet.”

Tan is organising a fundraiser in partnership with MDDB, called “Raise the Woof” at One Utama Central Park, Bandar Utama, on October 20, from 11am to 6pm. 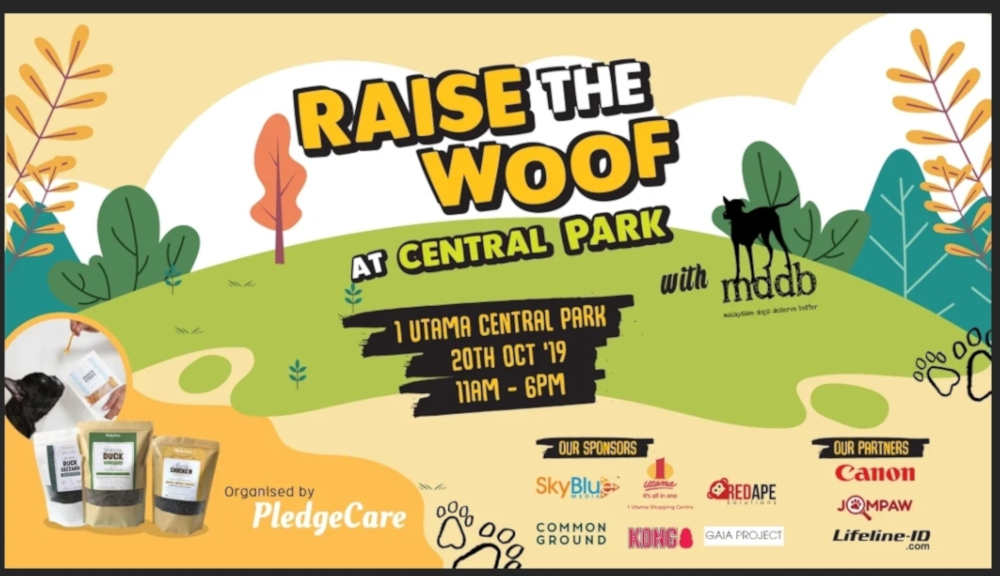 Be sure to bring along your furry companions to the ‘Raise the Woof’ fundraiser taking place this weekend. — Picture courtesy of Louis Tan

He has also made it a requirement for all participating partners to pledge a portion of their sales and profits to MDDB, so they can continue to operate and finish building their sanctuary home.

“The kind people at One Utama have given us a great big space at Central Park, so people can walk and play with their dogs, as well as partake in our pet games and activities,” said Tan.

“PledgeCare is donating 100 per cent of our sales to MDDB and the money raised will help them as they are in their final stages of completing their animal sanctuary to house over 200 dogs.”

He added that he hopes to be the catalyst to “push them across the finish line”, so that the abandoned, homeless and tortured dogs would finally have a place to feel loved and safe.

If you’re interested in attending the fundraiser with your furry little friend, you can surf here.

Alternatively, if you want to help out MDDB in any way you can e-mail them at [email protected]