KUALA LUMPUR, Nov 29 – November has been a month of tasty Thai temptations, one weekend after the next.

First, we quench our thirst with a refreshing blue pea flower cooler made from sapphire-hued dok anchan. Then a pungent and appetite-whetting starter of purple and green cabbage stir fried with nam pla (Thai fish sauce).

What main could be more aroi mak mak than a freshly fried turmeric-smeared halibut served with some prik nam pla (Thai-style dipping sauce) on the side? Now all we need is something sweet to end our meal with.

Well, how about keeping cool with loy kaew?

You may have never heard of it but chances are you’ve seen or tasted it, especially if you’ve visited Thailand in the past. Meaning “fruit in syrup” in Thai, loy kaew in its simplest form is made from fruits chilled in a light syrup and served over crushed ice.

One popular version is based on fresh lychees (linchi in Thai) and green mango (mamuang man). I’ve never had the chance to make this classic variation, however, though not for lack of trying.

Quite honestly, when lychees are in season, who can resist just enjoying them as they are? Pluck each individual orb from one of the stalks in the basket, peel and devour immediately. A messy endeavour, with the lychee juices dripping everywhere they shouldn’t, but oh what a beautiful mess.

Any green mangoes I can find inevitably ends up in a rojak buah or in a rapid-fire som tum. Their unripe tartness just begs for some spice and some pungency; destined for a starter or side dish rather than a dessert. 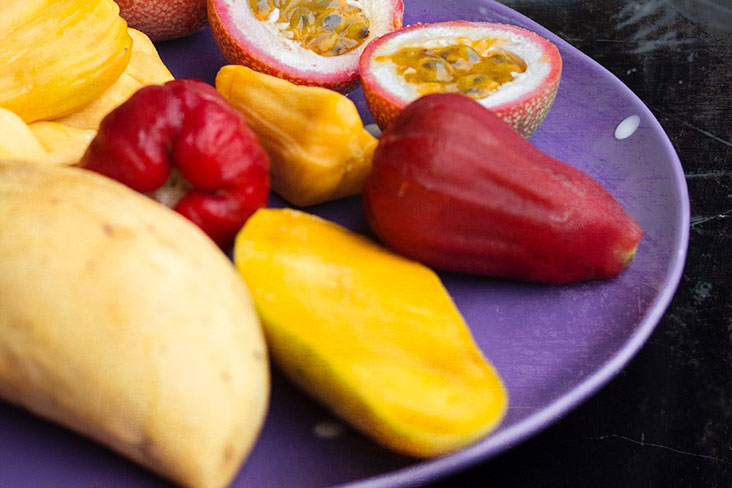 A wide array of tropical fruits, many found in both Malaysia and Thailand, can be included in 'loy kaew.'

So it is fortunate that with loy kaew, you are only limited by your imagination. Take your fancy of whatever tempts you the most in the fruit aisle. Be it passion fruit or rose apple, a wedge of cempedak still firm and so fragrant. Peel back the scale-like skin of the 'sala' fruit to reveal the golden-hued flesh inside.

Two Thai favourites to incorporate in loy kaew are sala fruit and marian plums. Both are a delectable blend of sweet and sour, two key flavour notes desired by the Thai palate.

The former, also known as Salacca zalacca, is a species of palm tree commonly cultivated in Malaysia (where it’s known as buah salak) and Thailand. Another name: snake skin fruit, due to its prickly, scale-like exterior. Its flesh is sweet like honey and slightly tangy. 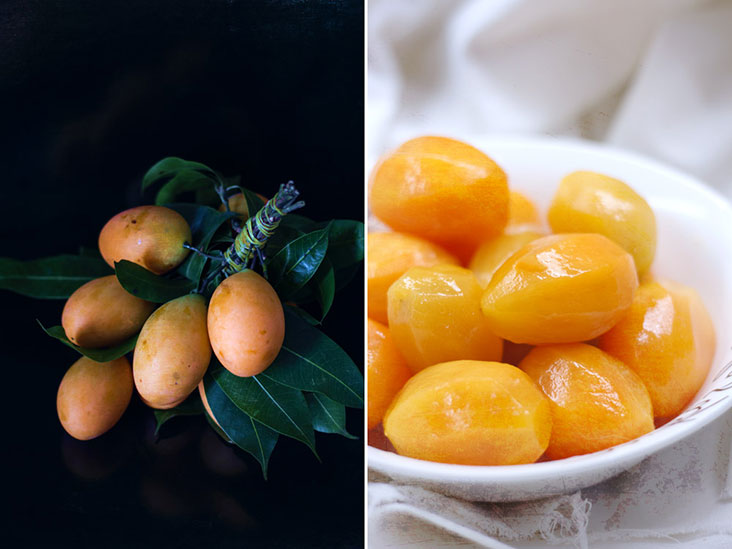 Marian plums (or 'mapraang' in Thai) make for a luscious version of 'loy kaew.'

Ripe marian plums (Bouea macrophylla) are divine as they are; serving them simply chilled in a light syrup will allow their mango-like sweetness and gentle tanginess to take centrestage. The Thais call these mapraang, which explains the name in English when the fruits aren’t real plums at all!

Add some accents – the citrusy scent of fresh limes or the fresh hit of young coconut water – and this simple dessert is elevated to a whole never level. 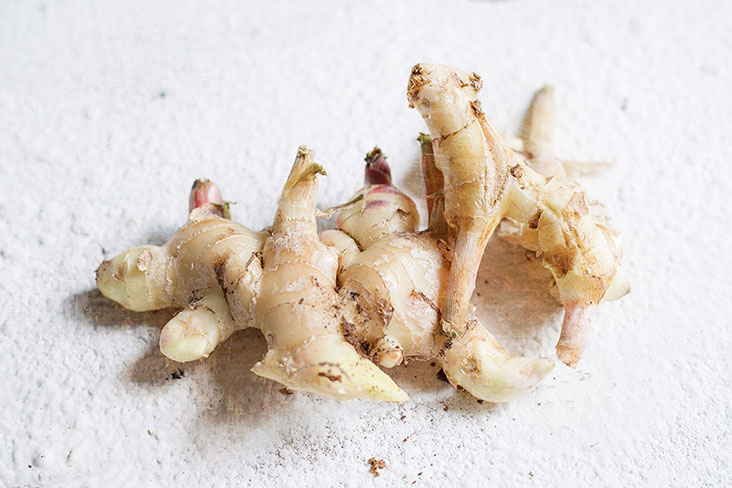 Finished with the requisite slivers of young ginger, which adds a lightly spicy fragrance, and sometimes even some fried shallots for a savoury touch and you’d wonder how meals were ever complete without a chilled bowl of loy kaew.

You may, of course, select from a wide array of tropical fruits, many found in both Malaysia and Thailand, to be included in your version of loy kaew. Whatever is fresh and in season usually works best.

Having said that, the Thais also make use of canned fruits especially for lychees, which have a notoriously short season. (One of my two recipes below utilises exactly this, so one may make it all year round.)

To make it more refreshing, drain the canned fruits of the syrup they are preserved in and make a new syrup from scratch, one that you may infuse with aromatics of your choice (limes and rosemary, for example).

Pairing one canned fruit with one fresh fruit is another way of preventing your dinner guests from bemoaning that you’re just serving them something out of a can!

The textures of the two fruits will differ and make for an interesting contrast. More fodder for your after-meal conversations, no?

½ can of lychees, drained

To prepare a very light syrup, combine the sugar and water in a pot. Add only the zest from the limes; reserve the juice for use later.

Heat the mixture until the sugar has dissolved completely. Remove from heat and allow to cool completely and the flavour from the lime zest has infused the syrup. 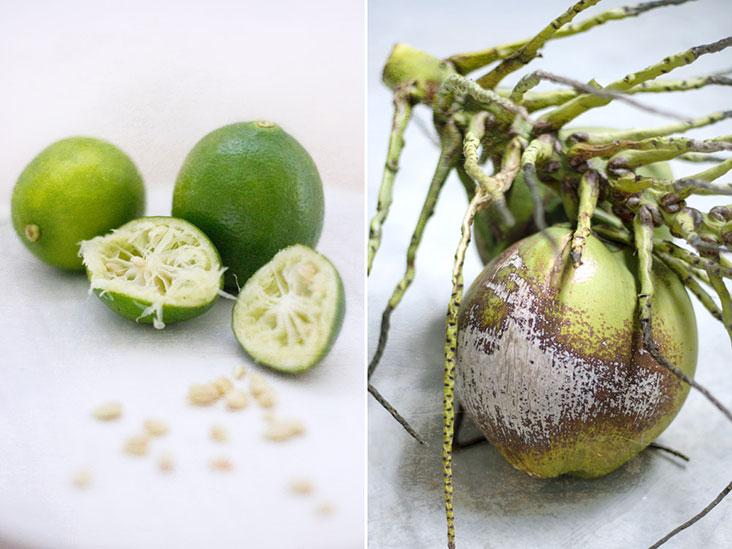 Limes (both its zest and juice) and coconut water help lift up an otherwise sweet dessert.

Once the syrup has cooled completely, remove the slivers of lime zest. Add the reserved lime juice, lychees and sala fruit to the syrup and chill in the fridge for at least three hours so the flavours infuse further.

Divide the chilled fruit and syrup into small bowls with the desired amount of crushed ice. Top with slivers of young ginger and garnish with some fried shallots, if desired. Serve immediately.

Add the coconut water and fresh rosemary to a pot and bring to a boil before continuing to simmer at low heat for 5-6 minutes. Remove from the heat and allow the rosemary and coconut water mixture to cool completely.

Once the mixture has cooled completely, remove the spent rosemary spears. Add the sliced marian plums to the rosemary-scented coconut water syrup and chill in the fridge for at least three hours. 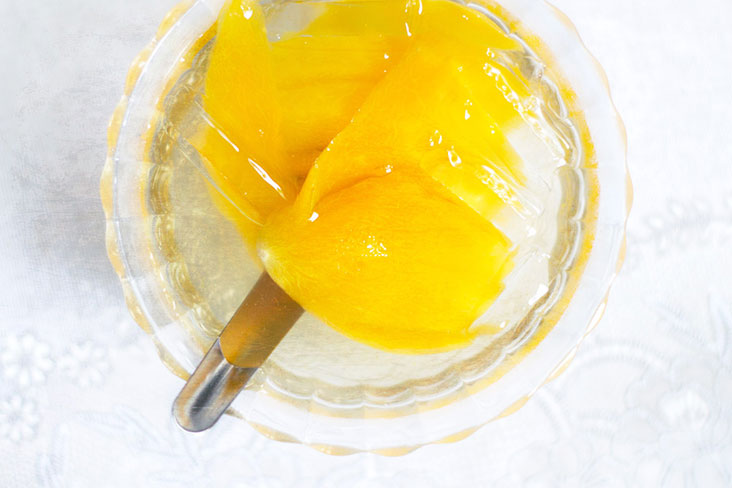 Divide the chilled fruit and syrup into small bowls with the desired amount of crushed ice. Top with slivers of young ginger and serve immediately.