Dou Dou Bake: Launching a designer bakery in PJ in the time of Covid-19

PETALING JAYA, July 11 — How do you design a bakery?

The first response that comes to mind is often another question: Do you need to design a bakery in the first place?

Isn’t it enough that you have a brick-and-mortar space — with appropriate social distancing these days, of course — to sell your bread and pastries?

Not according to Joey Mah. The man behind Three Little Birds Coffee and Artisan Roastery has teamed up with three-time Malaysian Barista Champion Keith Koay (2016, 2018 and 2020) to open the design-forward Dou Dou Bake.

Located in PJ’s Taman Rasa Sayang, the bakery is a long gestating passion project of the two partners which will finally open on July 13.

Joey says, “We wanted something different from the cafés I’ve been doing. I believe the design, which is more raw and natural, will give an immediately different first impression.” 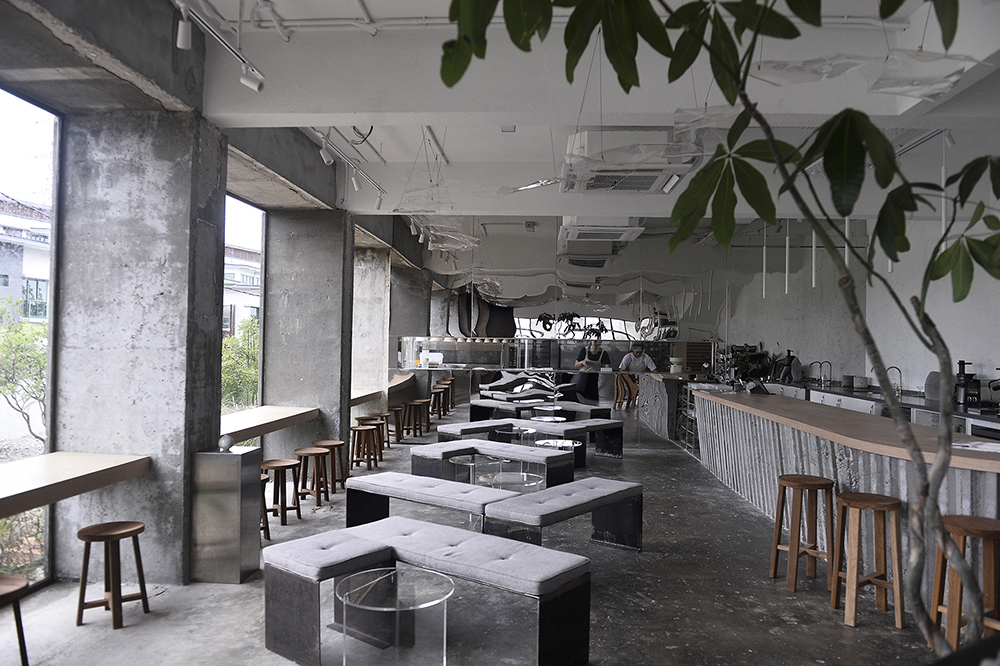 The bakery’s interior has a raw and natural palette.

To that end, the Dou Dou Bake founders recruited the help of plantscaping studio Sputnik Forests Labs to come up with a visual expression of their ideas.

Led by landscape artist Wei Ming, the Penang-based studio is a low-profile outfit focused on the rejuvenating power of green spaces.

Wei Ming says, “Our interior designer Chee Leong and I went around Joey’s cafés in KL. We did not want to redesign yet another café. Rather, we understand that even this bakery will be a third place, a space where folks can gather. But does it have to be a café?”

Joey firmly interjects, “This is not a café. Whatever you call it, just don’t call it a café.”

Smiling, Wei Ming concedes, “Let’s say it’s just a place where you come to have a cup of coffee or a meal. What we believe is that, like a Shinto shrine or an ashram, you can have oases of calm in a city.” 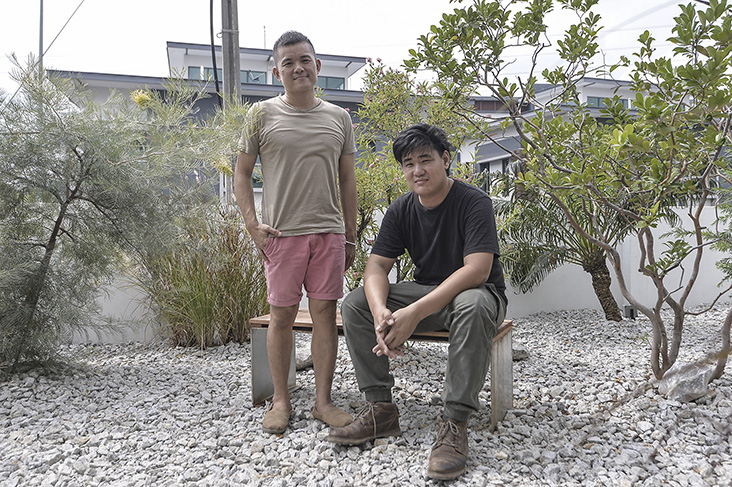 But isn’t a bakery simply a place where customers come to buy bread? How is a designer bakery different? Does it, perhaps, serve flat whites and single origin filter brews? (Note that I’m not saying that it’s a café.)

Wei Ming clarifies, “Cafés follow trends, with the usual suspects such as chalkboard menus and industrial design. We want to be different. Like how, at a Shinto shrine, you are greeted by a profusion of plants and how they quieten your mind. Like how, inside an ashram, only basic materials are used; there’s nothing too flashy.”

Indeed the ambience at Dou Dou Bake isn’t exactly the neon-coloured branding of bakery chains. The tones are neutral and the forms are basic.

Much of the furnishing is custom made; Wei Ming notes that “the wood for the benches is rescued from old houses in Penang, that I see as the bones of heritage buildings.”

The concept here, according to both the designers and their clients, is not to be too luxurious. Walls and columns are left exposed. The cushioned seats that cut a swathe across the length of the bakery reminds one of Blue Bottle Coffee’s Aoyama outpost in Tokyo, where everyone is used to squeezing together with their neighbour. 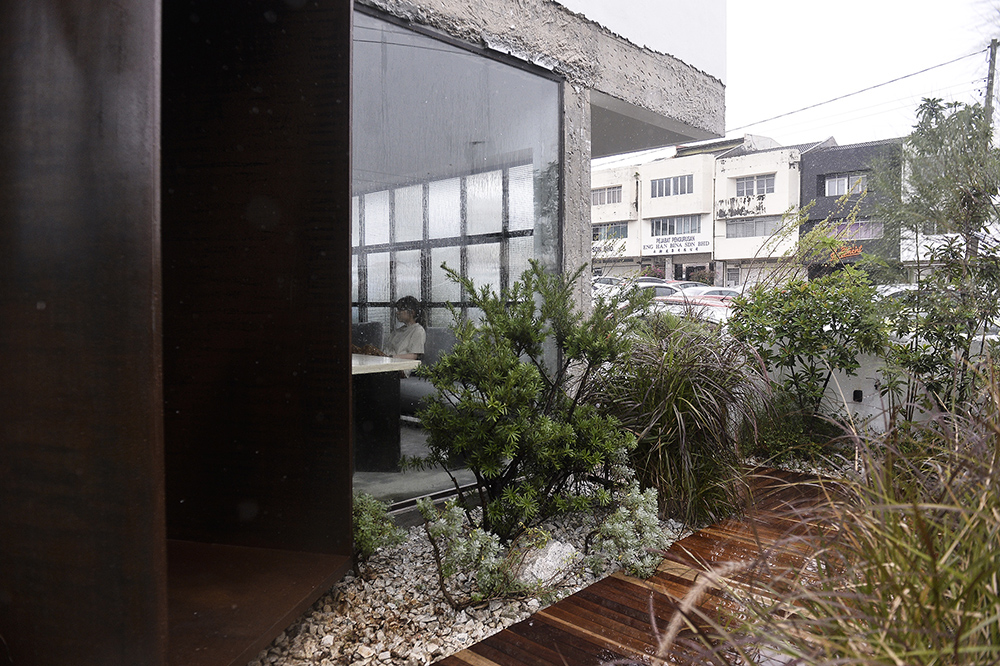 Joey says it reminds him of a bus stop.

It’s certainly different. Perhaps there is something to this notion of a designer bakery after all.

Imagine the warm woods and foraged foliage of Baker Gonna Bake in Bangkok, lending a golden glow to the loaves on display. Imagine the sleek and minimalist lines of Dans Dix Ans Bakery in Tokyo, oh so understated and oh so Japanese.

For the fashion conscious, the blond oaks and the charcoal polymers coat VyTA Boulangerie Italiana in Turin with style and substance. See, bread is bread but bakeries are meant to be different.

Possibly what helps Dou Dou Bake stand apart from other non-designer bakeries (or what we used to simply call “bakeries”) is the almost wild desert brush outside. This is no carefully planned tropical garden. 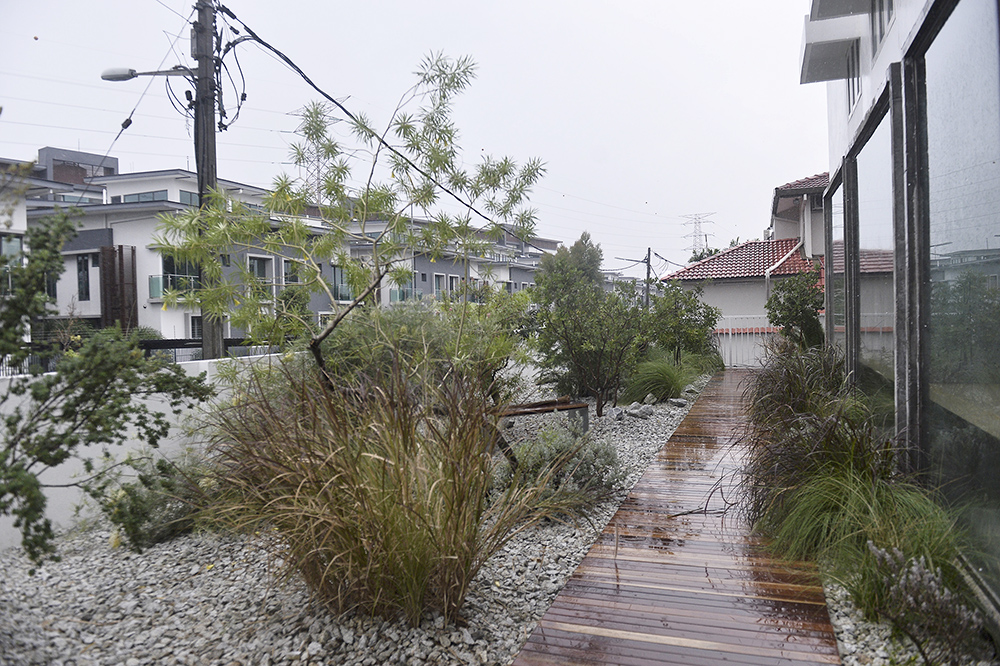 The garden outside Dou Dou is akin to wild desert brush... but artfully so.

Wei Ming, who has had three years of landscaping experience, says, “I believe in letting Nature do its own job. It looks prettier as it is, akin to an abandoned parking lot. Let the garden be its own form, unlike bonsai that is twisted and pruned.”

Ideally with landscaping, the designers and work team come in three months ahead of a shop’s opening to allow the greenery to mature. In reality, they rarely get this luxury.

Wei Ming says, “Sometimes It’s just a week or two. With Dou Dou, we got more than we bargained for thanks to the long movement control order (MCO) delay. Renovations had, in fact, started in December but we couldn’t restart till recently.”

The resultant space is dominated by a cold palette. Wei Ming explains, “This will allow the pastries to shine. From what I’ve seen, the art of coffee and of baking is akin to monastery training, rather monastic.”

Which is where the verdant space outside provides a bit of a contrast. The gravel on the ground feels strewn randomly rather than carefully raked into loops of ensō, the iconic Zen circle.

Fruit-bearing trees such as guava and longan are grown so they may have an edible function too, not merely decorative. A small herb garden in the corner provides the kitchen with fresh dill. 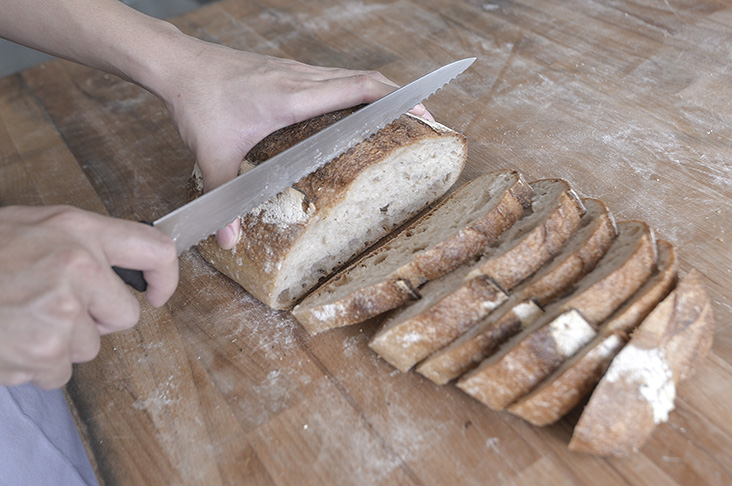 For co-owner Keith, who also runs One Half in PJ’s Taman Paramount, a place synonymous with coffee and sourdough bread, part of Dou Dou Bake’s appeal is its function as a central kitchen.

He says, “We’ll bake all our breads and pastries here, including those sold at One Half. Here we also have a hot kitchen where we will introduce a brunch menu in the future: a small one with 5-6 items to pair with the baked goods.”

Expect seasonal soups and freshly tossed salads, big breakfast items and a strong focus on sandwiches. This makes sense: One Half’s sourdough bread has always been their signature product and a draw for long-time regulars and, hopefully, curious residents in the neighbourhood alike.

Keith shares, “Our sourdough bread may look the same on the outside but the flavour is what sets it apart. The texture is different; the bread is moist, heavier, denser. A bold, dark bake really concentrates the flavour. Slice it and inside you’ll see a lovely open crumb.”

This intense flavour comes from the flour and how it’s sourced and made. At Dou Dou Bake, ancient grains such as spelt, purple rye, durum and kamut are used. Their bakers then mill these whole grains fresh every day to preserve its integrity. 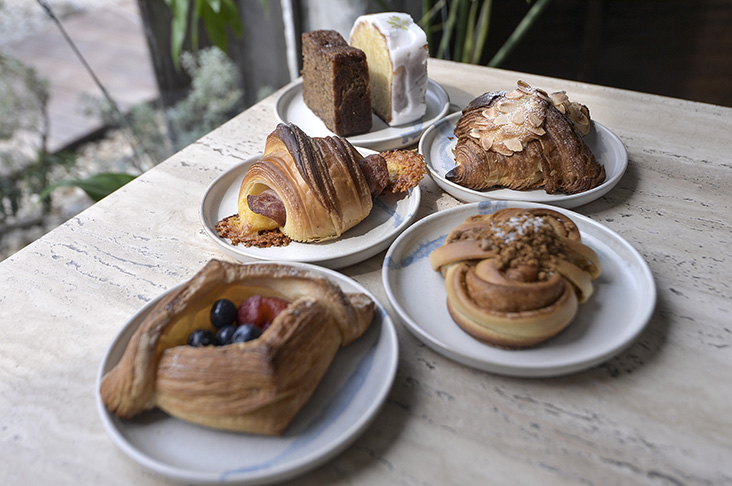 An assortment of Dou Dou Bake’s pastries, fresh from the oven.

“We don’t want ‘sour’ bread but grain flavoured sourdough bread. It’s all organic and it’s not cheap to source but you’ll taste the difference,” says Keith.

Joey chimes in, “Take our name, Dou Dou. It actually comes from ‘Dough Dough’, you see.”

What happened to the “-gh”?

“We ate it. That’s how you know this is good bread.”

Quirky marketing aside, the proof is in the pudding — or sourdough, as it were. I guess you have to drop by the bakery and taste for yourself.

Ah, but remember: just don’t call it a café.