When life hands you peas, make pea milk: Launching a new Malaysian business in the time of Covid-19

KUALA LUMPUR, July 23 — Perhaps there’s no clearer sign of recovery than this: instead of writing about another food-and-beverage (F&B) business struggling amidst the Covid-19 pandemic, I’m writing about one that has just launched.

Snappea’s founders, Justin Chan and Phoebe Cheong, have already one successful health food startup under their belt: Heal Nutrition, which offers a range of dairy and non-dairy protein shakes flavoured naturally with ingredients such as coffee, green tea, chocolate and natural stevia sweetener.

Their non-dairy protein shakes, marketed as Heal Vegan Protein with flavours such as Charcoal Sesame and Salted Chocolate — are based on pea protein. So it’s no surprise that they will launch a sibling company given the encouraging response they’ve got from customers.

According to Chan, Snappea represents a completely new category in the market. Ask any barista for non-dairy options when you order a latte and chances are you’d be offered almond milk, soy milk or oat milk.

So clearly pea milk is indeed something that’s not so commonly consumed yet, at least in this region. However, business potential isn’t the only reason Chan is excited about pea as a source of protein.

He shares, “I had attempted to be vegan for a month, simply to reduce my carbon footprint. According to an Oxford study, cutting meat and dairy products from your diet could reduce an individual’s carbon footprint from food by two-thirds.”

During his one month trial, Chan found that the hardest thing to give up on wasn’t meats but dairy, especially milk. He says, “No milk means you can’t have your quick breakfast with cereal and you have to give up on your latte too. And the majority of the plant-based milks in the market are simply not good enough — watery, bland, lack of protein and not enough nutrients.”

The earnest entrepreneur, a finance graduate from the London School of Economics and a veteran at Lazada during its start-up days, then delved deep into research into various non-dairy milk sources.

“It turns out, as one of the most sustainable food sources in the world, peas were the answer all along! Velvety, all-natural, and as wholesome as they come, so why not make milk out of peas?” 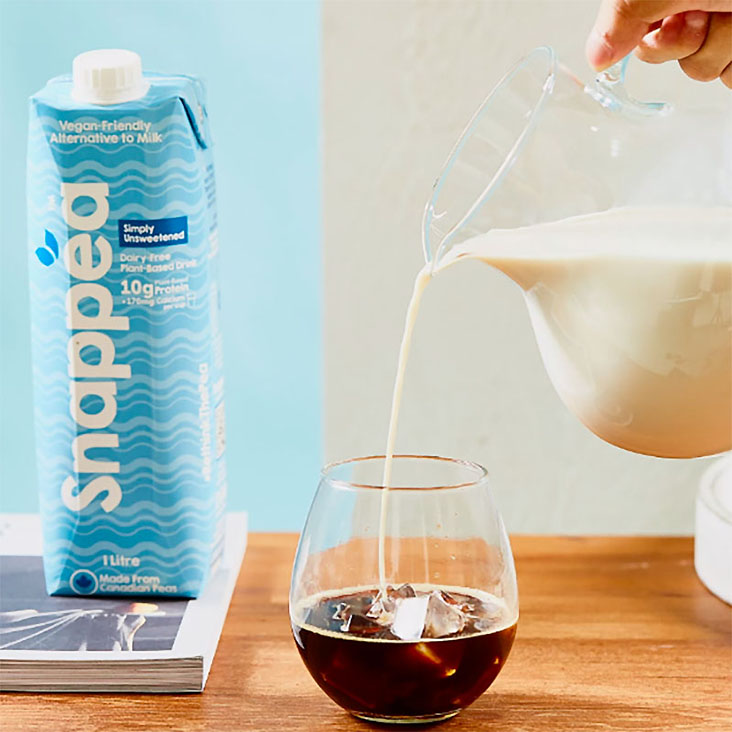 Chan adds that peas are considered friendly to the environment as they help in nitrogen fixing. This is the process whereby, in concert with symbiotic bacteria called rhizobia, the nitrogen level in the soil is naturally increased.

“In short, by planting peas, the soil can be enriched without the use of artificial fertilizers. Peas win!” enthuses Chan.

Snappea is purportedly 100 per cent vegan, dairy-free, lactose-free, soy-free, gluten-free and non-GMO (i.e. not derived from genetically modified organisms). While clearly the beverage would be safe for the general consumer, perhaps those with specific dietary requirements — such as veganism, lactose-intolerance, soy or gluten allergies — would be strong candidates for first adopters.

The quirky name itself comes from Chan’s own personal quirk. He explains, “I have a tendency of snapping my fingers when I am doing creative work to spark ideas. Hence, the brand: Snap + Pea = Snappea!”

This unassuming approach to branding, coupled with clean designs and bright, cheerful colours (something everyone’s collective mood could benefit from) has produced early, positive results.

Chan says, “Since we launched online last month (May 2020), we have received close to 1,000 orders online and many customers are asking about the availability of Snappea in their regions. Currently Snappea is only available in West Malaysia. You can now find our products in Jaya Grocer, Lazada & Shopee and more stockists will be coming next month.” 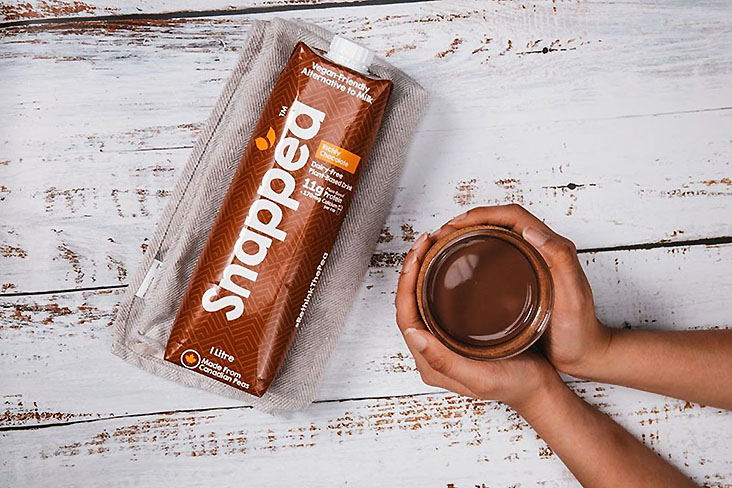 Snappea is likely targetting the present segment already occupied by plant-based milk substitutes such as soy milk. Chan observes, “Many of our customers feedback that Snappea tastes similar to soy, but without the bitter aftertaste of soy. Also, it’s 100 per cent non-GMO in comparison with 93 per cent of soy produced in the US is genetically modified to a certain extent.”

To obtain this level of non-GMO quality control, Chan has looked towards Canada as the largest producer of yellow peas globally to source for Snappea’s raw materials. He says, “We find that the quality of Canadian peas to be one of the best in the world, if not the best. It has a very clean taste, which is suitable to use in beverages like dairy-free milk alternatives.”

The lactose-free element is another key consideration in positioning Snappea. Chan shares, “Studies have shown that the percentage of the population who are lactose-intolerant can be as high as over 90 per cent of adults in some communities of Asia.”

All these encouraging factors aside, there is no amount of planning that can prepare a fledgling business for a global pandemic on the scale of Covid-19. Even with prior experience with startups such as Lazada and Heal Nutrition, Chan and his team were momentarily floored when the movement control order (MCO) was announced in mid-March.

“It was definitely difficult to launch a new product category like pea milk during the MCO period as there was a lot of information and education that needed to be conveyed to our customers. We had been planning the launch for a long time and our first batch of Snappea was produced right before MCO.”

The MCO lockdown meant that a traditional “offline” launch and corresponding distribution were no longer viable options. As with many other businesses, this involved going back to the drawing board and thinking of more creative strategies. But it also meant a waiting game till the conditions were more amenable.

Chan says, “Luckily, thanks to our strong IT and customer service team, we managed to successfully launch Snappea online in May. We are also working hard to make Snappea available in other regions such as East Malaysia and other countries in South-east Asia.”

There is never a perfect time to start a business. The only time is now and to work with what you have. Chan and his team have shown neither the lockdown nor a perceived reduction in consumer spending ought to be deterrents; instead the hurdles can spur true entrepreneurs further.

With apologies to whoever came up with the original citrusy proverb: When life hands you peas, make pea milk.