‘Ayam pansuh’ — A Sarawak exotic delicacy loved by many (VIDEO)

KUCHING, June 28 — Mention ayam pansuh (chicken cooked in bamboo), many people are familiar and have tasted the exotic traditional delicacy of the Dayak ethnic group in Sarawak.

This traditional dish is synonymous with the Dayak community in Sarawak comprising the Iban, Bidayuh and Orang Ulu.

The non-Dayak community, including from the peninsula and tourists from abroad have also tried it when visiting Sarawak.  Locally, the dish is called ‘ayam pansuh’ or ‘manok pansuh’ in the Iban language while the Bidayuh name it ‘syok tanok darum bu-uruk’ or chicken cooked in bamboo.

Just like lemang (glutinous rice with coconut milk), this special delicacy is slowly cooked in bamboo, over wood fire or ember.

A homestay operator in Kampung Semadang, Penrissen, near Kuching, Kerin Sarus, 51, said the delicious taste of the dish lay not only in the originality of the recipe, but also the aroma and flavour of the chicken meat.  According to him, the dish is commonly served during festival celebrations in Sarawak, but today it has become so commercialised that it is a common item on restaurant menus.

Sharing the meticulous way of cooking ayam pansuh, Kerin said one would need freshly cut bamboo in which to cook the dish, and the ingredients consisted of chicken pieces, ginger, lemongrass, garlic, salt, torch ginger flower and tapioca leaves.

He said for a better taste, using free-range or kampung chicken was recommended as the sweetness of the marinated chicken meat cooked in bamboo produced a wonderful aroma and flavour.

Without using any cooking oil and water, the chicken is marinated for about half an hour with the other ingredients before being placed in the bamboo, with its opening covered with tapioca leaves before the bamboo is placed over the wood fire. 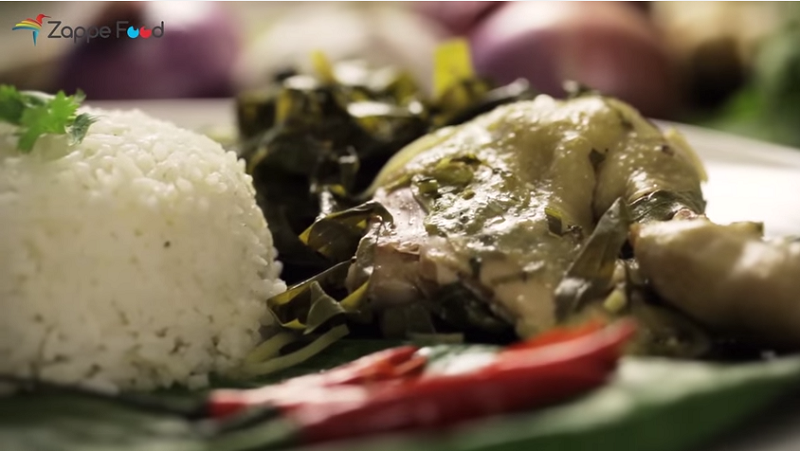 He said the resulting steam from the chicken cooked in the bamboo would be its gravy.

“Do not put the bamboo too near the fire, and slowly cooking it over the burning wood or ember is the best way. Let the chicken cook for about half an hour before serving it,” he said.

He said this natural cooking method would seal in the flavours and produce astonishingly tender and juicy chicken with aromatic gravy.  Ayam pansuh fan, Siti Azureen Zukifli, 25, said: “This delicacy has a unique flavour and is best eaten with steaming hot plain rice.” A student from Swinburne University, Melbourne, Australia, Goldie Yang, 26, who had stayed at Kerin’s homestay previously said she loved the dish after trying it even for the first time..

“Besides its unique, delicious taste, ayam pansuh is also a healthy dish as it is cooked without oil, as well as rich in nutritious herbs,” said Yang, who is from China.

Besides chicken, the Dayak community in Sarawak also cook fish and shrimp in bamboo. ­— Bernama