MARCH 30 ― Although the current administration will increase the funding allocation of the National Covid-19 Immunisation Programme (NIP) from RM3 billion to RM5 billion, low vaccination coverage in several Malaysian states might hinder Malaysia’s progress in achieving herd immunity by the end of this year.

Due to limited vaccine supplies, only 1,338 frontliners (60%) in Sibu Hospital, Sarawak were vaccinated with the first dose in Phase 1 of vaccination as of March 22. As Sibu has 664 active coronavirus cases, the vaccination progress is considered slow, given that the NIP has started on Feb 24.

Despite the NIP has outlined the usage of mobile vaccination clinics, the majority of sites are still concentrated within urban areas along the west coast of Peninsular Malaysia. This can be seen when Sabah and Sarawak received low vaccination rate as of March 23, which are 1.05% and 1.28%, as shown in Graph 1. 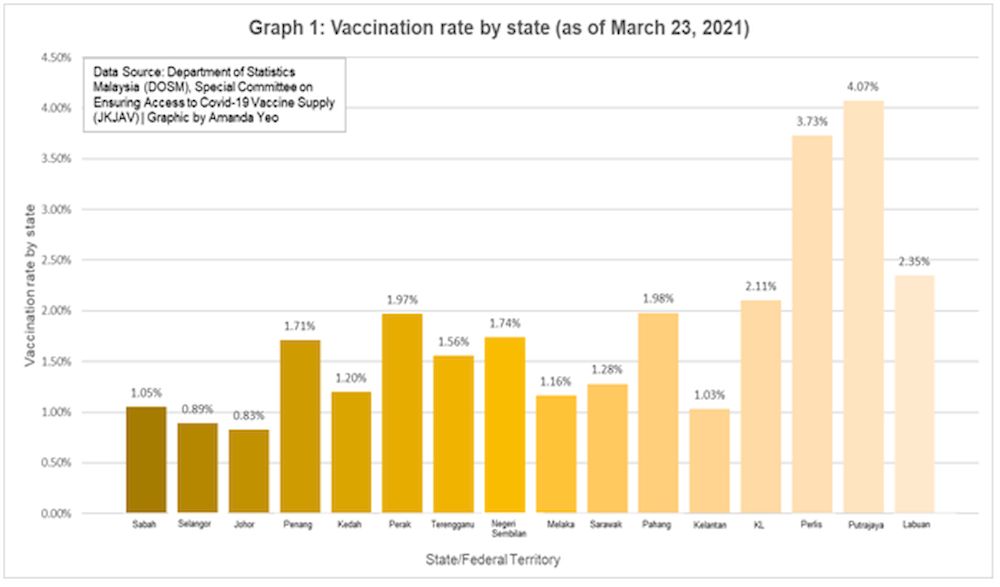 Graph 2 which shows the total percentage of the population that have received their first dose as of March 23 further revealed different vaccination coverage levels across all Malaysian states. 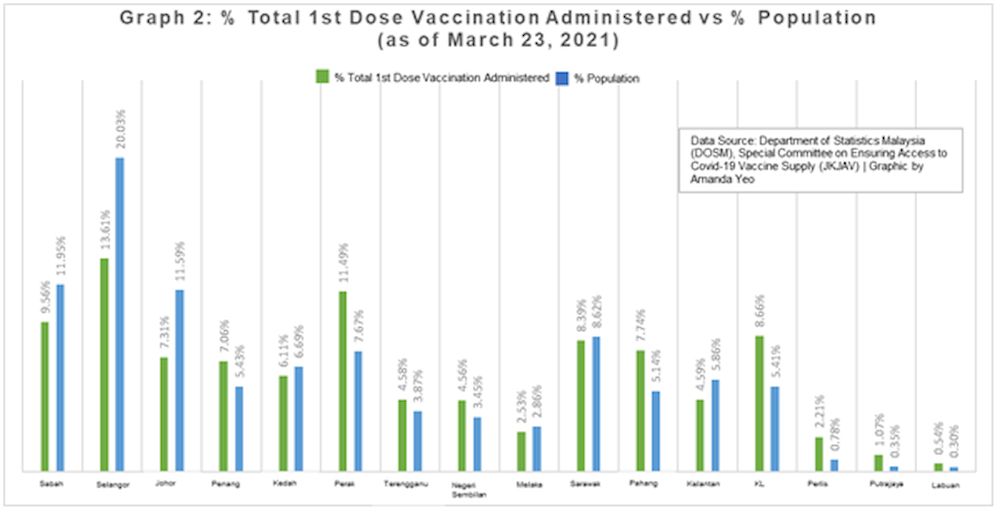 Among the states with larger population size such as Selangor, the number of people receiving the first dose in Selangor as a proportion of the total number vaccinated with the first dose nationwide is the lowest – 13.61%. Population wise, 20.03% of Malaysians reside in Selangor. This coincides with a low vaccination rate of 0.89% as shown in Graph 1.

To summarise, these two graphs illustrate that it is relatively easy for the states with smaller population size to mobilise vaccine corps volunteering in vaccination programme.

Vaccine corps refer to the ones who could deliver vaccine shots, monitoring individuals who had just been vaccinated or scheduling second doses for the vaccines to be fully effective.

On the other hand, states with larger population size would have to mobilise a large number of vaccine corps driving through muddy, uneven roads besides having a boat ride to reach the remote or rural population who live beyond 5km of any kind of health facility. A lack of specialists and medical equipment would also hinder the progress of vaccination.

Despite 86% (430,368 individuals) out of 500,000 targeted population nationwide received their first dose of the Covid-19 vaccine during Phase 1 of the vaccination as of March 23, there is an increasing concern that the vaccination coverage remains low in some states such as Sabah, Selangor, Johor, Kedah, Melaka, Sarawak and Kelantan.

To date, Phase 2 of the vaccination comprises two categories and will start from the beginning of April till the end of August:

Remainder of healthcare workers as well as those in essential services and defence and security personnel; and

Senior citizens aged 60 and above, high-risk group with chronic diseases such as heart disease, obesity, diabetes and high blood pressure and people with disabilities (OKU).

Phase 3 of the vaccination involves both citizens and non-citizens aged 18 years and above and will kickstart from May till Feb next year.

Although JKJAV has the plan to set up temporary vaccination centres by utilising stadiums, convention centres, community halls, universities and other appropriate facilities across Malaysia, the NIP Handbook indicated a relatively low number of Vaccines Administration Centres (VACs) allocated in states such as Kelantan, Terengganu, Pahang, Johor, Sabah and Sarawak.

Therefore, to enhance vaccination coverage in all Malaysian states during this year, EMIR Research has several policy recommendations for the JKJAV to look into:

1.  Enhance coordination between the federal government and state governments to ensure the vaccines are distributed according to the population needs and logistical requirements;

2.  Mobilise a large number of vaccine crops to volunteer in the vaccination programme. Besides medical, nursing and pharmacy students, vaccine corps could be formed by community grassroots, comprising retired or unemployed clinicians;

As the current administration is planning to station 15,000 officers in 950 vaccination centres throughout the country, some of them can be allocated to the east coast of Peninsular Malaysia and East Malaysia, giving extra helping hands in vaccine injection for the benefits of residents who are in less-developed Malaysian states;

Mark and include all the semi-urban, rural and interior areas onto the map, ensuring an effective house-to-house community outreach programme that will be implemented by the National Disaster Management Agency (Nadma) with the involvement of the military. This would ensure citizens in these areas receiving vaccination sooner; and

Consider the Sarawak state government’s plan to vaccinate all categories of people in rural areas at the same time instead of separating them into phases. It would reduce the travelling cost and time of health and welfare officers.

As suggested by The People’s Health Forum (PHF) on “Is vaccination against Covid-19 really necessary?” (Malay Mail, March 22, 2021), a mass vaccination programme would help Malaysia to achieve herd immunity as scheduled. A lower R-naught value (below 1.0) would also enable Malaysia to gauge the right balance between lives and livelihoods, protecting citizens from infecting deadly epidemics.

In a nutshell, a mass vaccination programme with an emphasis on vaccination coverage across all Malaysian states is not only necessary but needs to be implemented effectively and efficiently.

**This is the personal opinion of the writer or organisation and does not necessarily represent the views of Malay Mail.